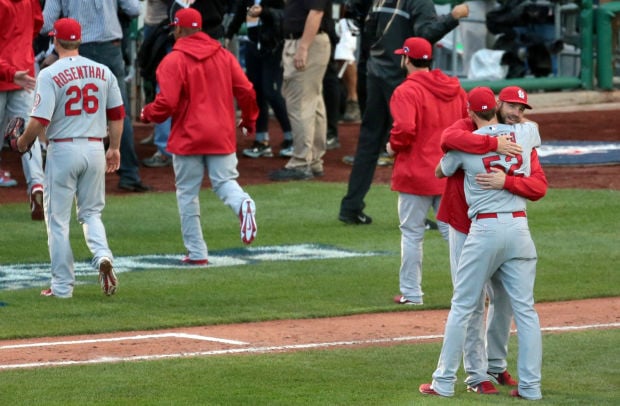 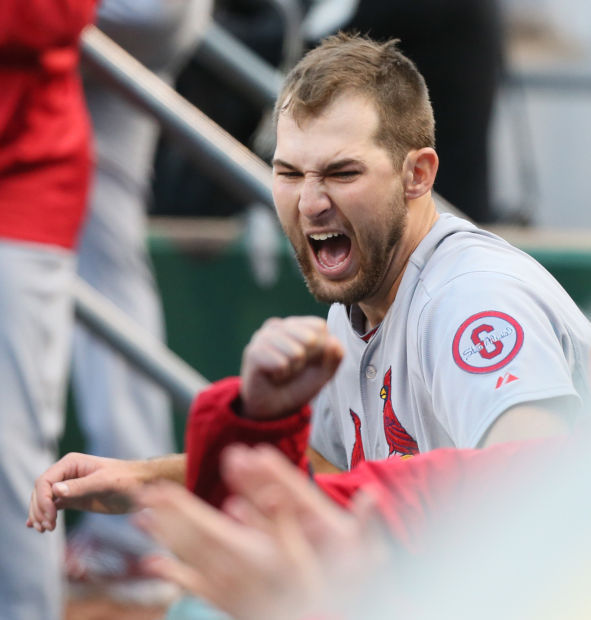 PITTSBURGH • For John Mozeliak it happened in the middle of last summer when first-round pick Michael Wacha visited the general manager’s box during a game and was so attentive and respectful to an elderly friend Wacha had never met that Mozeliak still marvels about it. For Chris Carpenter, it was a spring training game against the New York Mets on TV when he first saw the rookie’s command of far more than just his pitches.

Adam Wainwright, Carlos Beltran, manager Mike Matheny and many more in the Cardinals’ clubhouse have all described their Wacha moment — that first time the 22-year-old righty transcends his age and reveals a budding ace behind the congenial grin.

The postseason had its moment Monday.

With the Cardinals facing elimination, Wacha was perfect through five innings and took a no-hitter into the eighth to dictate a 2-1 victory against Pittsburgh at PNC Park. The rookie allowed one run on one hit in Game 4 and threw the National League division series into a winner-take-all Game 5 on Wednesday at Busch Stadium. The kid sure knows how to make a first impression.

By flirting with history, Wacha assured the Cardinals didn’t become it.

“It’s not rising to the occasion. It’s just that you want it,” said Carpenter, who two years ago to the day shut out Philadelphia in a division series Game 5. “He’s not scared of this. He wanted to pitch. He wanted it. You could tell. I know he’ll be all nice and say what he says because he’s this super great kid and he’ll smile as he says it. But I guarantee inside he was thinking, ‘I hope I get that (gosh darn) ball because I don’t want any one else to have it. I can take care of this.’”

For the second time in as many starts, Wacha took a no-hitter through the seventh inning, and he did so Monday with the Cardinals’ season in the balance. A record crowd of 40,493 — four more than Sunday’s largest-ever at PNC — wore mostly black and came to celebrate the Cardinals’ demise, launching the Pirates to a postseason series win for the first time since October 1979, three months before Matt Holliday was born. In his playoff debut, Wacha retired 22 of the first 23 batters he faced and took a no-hitter deeper into a postseason game than any rookie ever had.

Holliday’s two-run homer in the sixth was all the cushion Wacha had and all the Cardinals would need. The Cardinals got 27 outs from three rookie pitchers, age 23 or younger, each a jewel from the game’s best farm system. After Carlos Martinez closed the eighth with a K, rookie Trevor Rosenthal clinched his first postseason save to tie the best-of-five series at 2-2.

The Cardinals planned months ahead for Wacha’s postseason debut. Entering the season, officials plotted a schedule that would limit Wacha’s innings early so that he would be available and unrestricted late. For “games that mattered,” Mozeliak said. The Cardinals scheduled rest and even a stint in the bullpen to keep Wacha around the 170-inning zone. He reached September behind the pace set for him. With 149 2/3 innings on his arm, he was available for whatever the Cardinals needed in the postseason.

Matheny and his staff elected to start Wacha in Game 4 ahead of 15-game winner Shelby Miller because his changeup was a tougher test for the Pirates and, in his last regular season start, he pitched 8 2/3 no-hit innings before an infield single glanced off his glove.

“We did think he was most fresh,” Mozeliak said.

Wacha set a swift and unrelenting pace in the first inning. He struck out No. 2 hitter Neil Walker on a changeup. He caught MVP candidate Andrew McCutchen looking at a 96-mph fastball. And he was off. Wacha struck out five of the first seven batters he faced. The Pirates didn’t get a ball out of the infield until McCutchen lofted an 0-2 pitch to right field to end the fourth inning. Wacha got a first pitch strike on 11 of the first 14 batters he faced and teased the Pirates with an improved toy.

McCutchen’s fly out came on a curveball, a pitch that Wacha aimed to improve during a midseason stint in the Class AAA rotation. The first one he threw caught Carpenter’s attention in the dugout.

“What the hell was that?” Carpenter asked teammates.

With Molina at the wheel, Wacha threw the curve more and better than he had in other starts. In one at-bat against Marlon Byrd in the fifth inning, Wacha threw three consecutive curves before striking out Byrd on a 95 mph fastball. A reliable curve gave him a pitch around 77 mph to go with a fastball that touched 98.8 mph, according to Pitch F/x. That wide-open range gave his changeup room to frolic.

Pittsburgh was “going out there looking for that fastball-changeup and to see something breaking was probably a big shocker to their system,” Wainwright said.

“I feel like he’s the next coming of Adam Wainwright,” Byrd said. “He knows how to pitch. He has that swagger. He knows he has good stuff, and he pitches with it. Wainwright is one of the best pitchers in the game. I think Wacha is on the path.”

Pirates starter Charlie Morton, who had a 7.90 ERA against the Cardinals this season, matched Wacha zero for zero through five innings. Immediately after Wacha tested Byrd with the curves, Morton hit the bend in his start. A leadoff walk to Carlos Beltran brought Holliday to the plate. Holliday had 15 hits at PNC during the regular season, but only two for extra-bases and none over the wall. He took Morton’s 2-2 offer to dead center, some 417 feet away.

With his first lead came Wacha’s first misstep. He walked the leadoff batter in the bottom of the sixth on four pitches to end his perfect game.

Wacha, the 19th overall selection in the 2012 draft, retired the side in order in the seventh on eight pitches. He struck out Byrd to start the eighth with a 96 mph fastball. His no-hitter ended on the next Pirate’s swing. Pedro Alvarez launched a 3-1 pitch onto the concourse beyond right-center field to cut the Cardinals’ lead in half and end Wacha’s no-hitter. The Pirates were three for 52 this season against Wacha before Alvarez’s third homer of the series.

Wacha had allowed one hit in his previous 16 innings and struck out 18. Even with the homer, batters have two hits in their past 50 at-bats vs. the righty.

With the help of Molina catching Josh Harrison on a broken hit-and-run, Martinez pitched out of the eighth. In the ninth, Rosenthal put the tying run on base with a walk before getting McCutchen to fly out and take the series to Game 5.

The Cardinals improved to 7-1 in elimination games since 2011. This is the first time they’ve fallen behind 1-2 in a NLDS and had to force a Game 5 at home. Wacha’s moment means Wainwright has a chance for his on Wednesday.

Strauss: Like it or not, spotlight is on Holliday

Ill at ease talking about himself, veteran hits game-deciding homer that turns his role into an unavoidable topic.

Cards notebook • Leadoff hitter strikes out three times in Game 4 and has struggled to an .067 average in NLDS.

Post-Dispatch photographers Chris Lee, Huy Mach and David Carson were on the scene in Pittsburgh for game 4 of the National League Divisional …

A lot of amazing stuff happened in baseball, but what we saw in Pittsburgh had the biggest long-term impact on our national pastime.

Cards bring series back to Busch

Check out the live action of Game 4 of the National League Division Series, which the Cardinals won 2-1 on Monday at PNC Park in Pittsburgh.

14 Cardinals rookie starters in the postseason

From Paul "Daffy" Dean to Michael Wacha, here's a look at Cardinals rookie pitchers who have started games in the postseason.

Hummel: Wacha, Cards even series at 2

From Grover Cleveland Alexander to Adam Wainwright, here are the Cardinals who pitched complete-game victories in the postseason.