'We probably won't hardly interact at all': More masks, greater distance, acute awareness -- Cardinals get back to work after COVID-19 outbreak
0 comments
Share this
{{featured_button_text}}
1 of 2 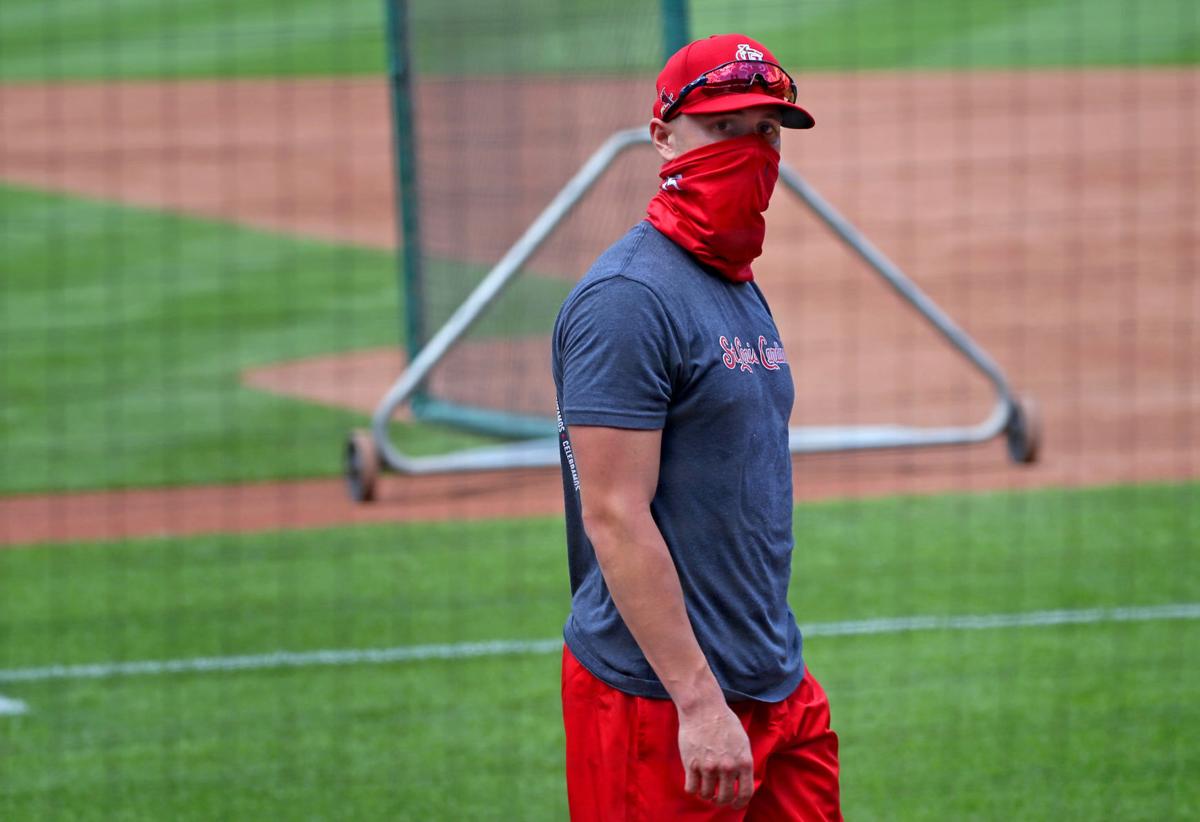 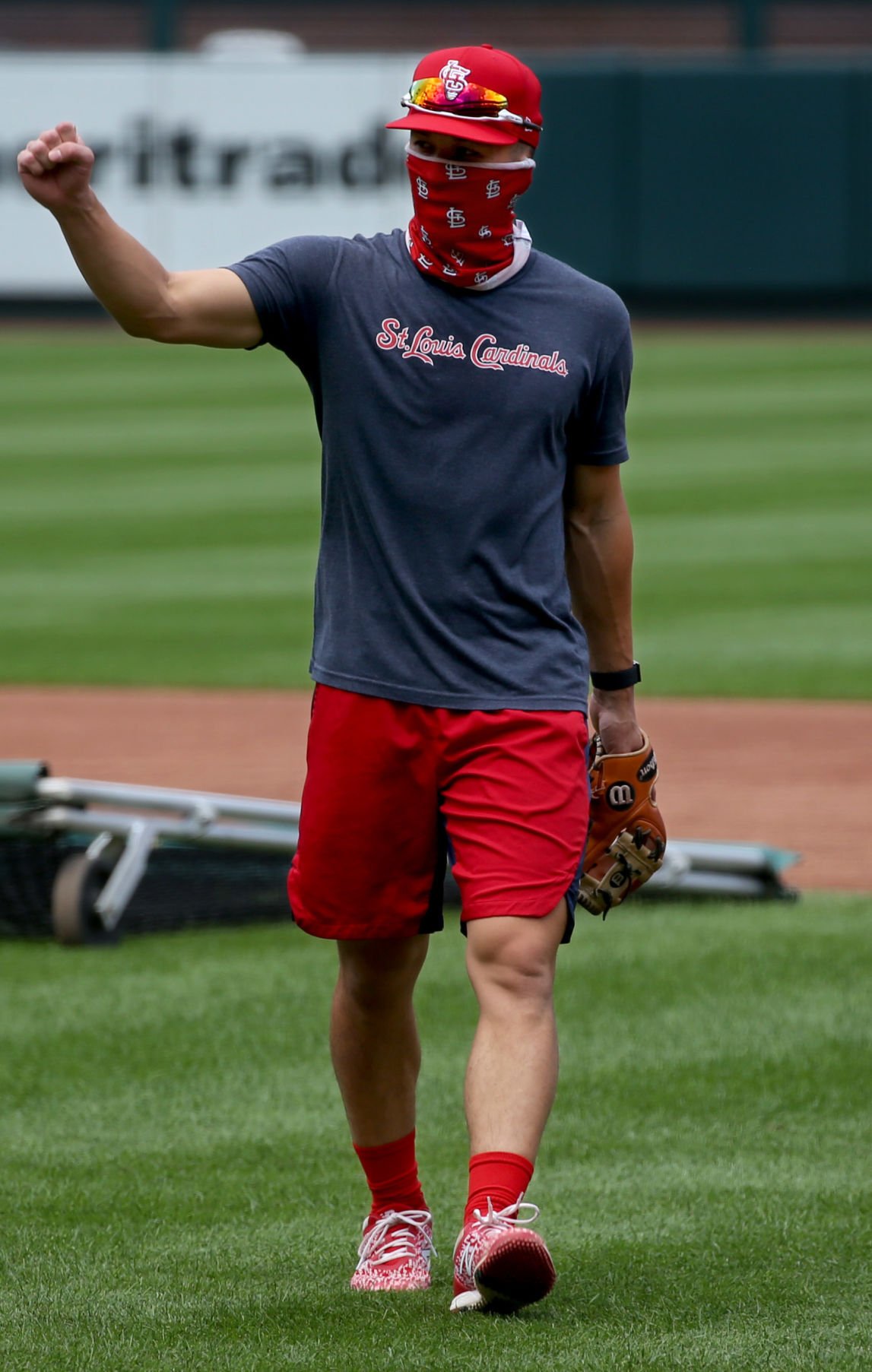 Cardinals infielder Tommy Edman finishes workouts in the shortstop position with a gesture to the ball hitter on Wednesday, Aug. 5, 2020, as the Cardinals resume practice at Busch Stadium following the announcement of several team members who tested positive for COVID-19. Two of the players are catcher Yadier Molina and shortstop Paul DeJong. Photo by Christian Gooden, cgooden@post-dispatch.com

The new face of the immediate future for the Cardinals was hard to see, covered as it was behind a mask that matched the STL on his hat and stretched from the bridge of his nose, past his chin, and to the collar of his workout shirt.

Between the top of his mask and the brim of that hat were the eyes of Tommy Edman as he took groundballs at Busch Stadium on Wednesday, his first day as the Cardinals’ starting shortstop. Alex Reyes and Genesis Cabrera, two pitchers added to the roster Wednesday, walked toward the dugout after playing catch — half of their faces covered in masks. The quarantine lifted, the Cardinals flew home Wednesday morning and took the field as a team for the first time in a week. A handful of newcomers arrived to replace teammates who tested positive for COVID-19 during the weekend outbreak, and one ubiquitous addition to the team signaled another significant change for the Cardinals.

There were a lot more masks on the field.

“Wearing a facemask. Social distancing,” said John Mozeliak, president of baseball operations. “These are the things that you’re going to see this club practice even better. They realize the importance of what they just experienced, and they don’t want to do it again.”

While isolated in the historic Pfister Hotel in downtown Milwaukee for five days, the Cardinals had plenty of time, opportunity, and conversation about how to break habits and reinforce their protocols to avoid a puncture in the bubble they had to rebuild. The Cardinals had their third consecutive day without a positive test for the virus after 13 members of the traveling party were diagnosed with novel coronavirus. Seven, including catcher Yadier Molina and Paul DeJong, were players, all of them placed on the injured list Tuesday.

The Cardinals have traced the infection back to contact at least one member of the team had with an associate, who was asymptomatic, outside of the club’s testing and perimeter. Team officials said they believe the virus crept onto the roster before leaving St. Louis and spread as a result of interactions that couldn’t be avoided and some clusters of conduct around and on the field that could.

“Clearly something happened that allowed this to get into our space,” manager Mike Shildt said. “I can’t say that everybody was ultra-responsible at every, single, waking turn, but I can tell you this is a responsible group. … We’ll take it to that even next level. To where, candidly, we probably won’t hardly interact at all. At any point, way, shape or form. You talk about going from a sterile environment to — is there such a thing as uber-sterile environment? Where there is virtually little interaction at all. If that’s what it takes, that’s what this group is committed to doing.”

That started with the conspicuous presence of more masks on the field Wednesday during workouts. It will continue as the Cardinals stress no high-fives and hugs, and they look to create greater distance between each other in the dugout and bullpen. The Cardinals were able to understand the spread of the virus — which Shildt called an "invisible beast" — parallel to the testing because contact tracing revealed what groups of players and staff had been together, in close proximity, and likely exposed.

During a recent series, a coach appeared to try and break up a gathering of players, and when asked about the reminder of protocols’ importance, Shildt said in Minnesota that it was “impossible to social distance, 6 feet apart from each other, 100 percent of the time in a dugout.”

Look for them to try.

“If you’re not in the lineup, you are not in the dugout,” Shildt said Wednesday. “As hard as it is, as natural as it is, and as ingrained as it is to physically support your teammate with a high-five or a pat on the back to celebrate or to pick somebody up, we just won’t do it. We’re going to be super-cautious with everything we do.”

Said Mozeliak: “Habits that are hard to break — when someone hits a home run you give them a high-five. Trying to break these habits and change how we act during the game — that is challenging. When we get back on the field, that’s going to be a steadfast reminder that we’ve got to stay away from each other.”

The outbreak brought increased scrutiny and questions about the Cardinals’ activities away from the hotel and ballpark, some of which they shared on social media. During the off day in Milwaukee, hours before the team learned of the first two positive tests, two players, Dexter Fowler and Kolten Wong, shared images on social media of their time at Whistling Straits Golf Course. They had team permission to go, to get outside, to maintain safe practices.

But the team has seen in the past week how optics can invite speculation about actions.

A photo posted on Facebook by the City of Carlyle, Ill., featured two Cardinals posing with someone at a nearby lake — with no masks, but hand sanitizer in the foreground. In July, outfielders Harrison Bader and Fowler attended a drive-in concert with Jim Edmonds at Hollywood Casino Amphitheater, and shared photos of them wearing masks or sitting atop cars. It’s not clear if Nelly’s outdoor concert, held 18 days before the Cardinals’ outbreak, was the genesis of a report that some Cardinals went to a casino.

The allegation, which began as a tweet from former big-leaguer Jerry Hairston Jr., did not have the key news elements of where or when the Cardinals’ visit took place. But it was enough to concern Milwaukee’s Potawatomi Hotel & Casino due to the public health factor that the Cardinals arrived in the midst of the outbreak. Safety protocols at the casino require membership and a reservation to gamble — as well as other evaluations — so officials at the casino reviewed the list of customers to determine if a Cardinal had been there, a spokesman said. They found no record of one, the spokesman said. The Cardinals insist they did not have players break protocols from the hotel in Minneapolis. Mozeliak said he has “not seen any proof of that.”

To review protocols and also evaluate any need for stricter rules, Major League Baseball surveyed the Cardinals’ pre-outbreak actions as well and, according to sources outside of the team, found no alarming breach that would have led to the outbreak or that happened during it.

“If we did something that was careless or overly negligent, I would be the first to say, hey, we were negligent or irresponsible,” Shildt said. “But I can also defend what I know and defend what I see.”

What they intend to see is the reminder of the past week on everyone’s faces, shrouded by a mask when not at play. Or see it in the hesitance right before a celebratory high-five becomes an elbow bump.

Or they can be reminded by what they don’t see.

Thirteen members of the club are still in self-isolation, some experiencing mild symptoms of the virus, and most at least a week away from returning.

“The void of the layoff and teammates not being on the flight with us, not being with us — that’s a setback,” Shildt said. “But I can tell you this group is really dedicated to each other and to figuring out a way to get through this. … We’re going to be OK. We’re going to get through this. Let’s continue to make sure we’re together. Let’s continue to make sure we’re following the protocols, we’re being smart.”

Kim will return to rotation with Martinez out, B5

For rapid COVID-19 testing, it helps to be an athlete

Cardinals swap in off days, stuff schedule with doubleheaders vs. Tigers, Brewers

With 52 days to cram in 55 games, the Cardinals have given up off days in exchange for two interleague doubleheaders against Detroit and that'…

Cardinals got back to Busch Stadium for an afternoon workout on Wednesday, Aug. 5, 2020, as the Cardinals resume practice following the announ…

Cardinals infielder Tommy Edman finishes workouts in the shortstop position with a gesture to the ball hitter on Wednesday, Aug. 5, 2020, as the Cardinals resume practice at Busch Stadium following the announcement of several team members who tested positive for COVID-19. Two of the players are catcher Yadier Molina and shortstop Paul DeJong. Photo by Christian Gooden, cgooden@post-dispatch.com