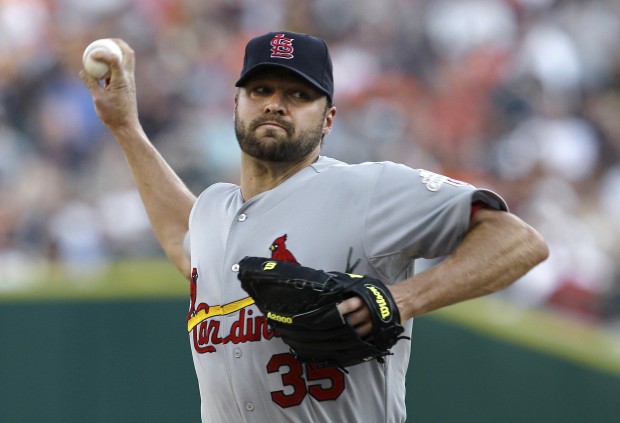 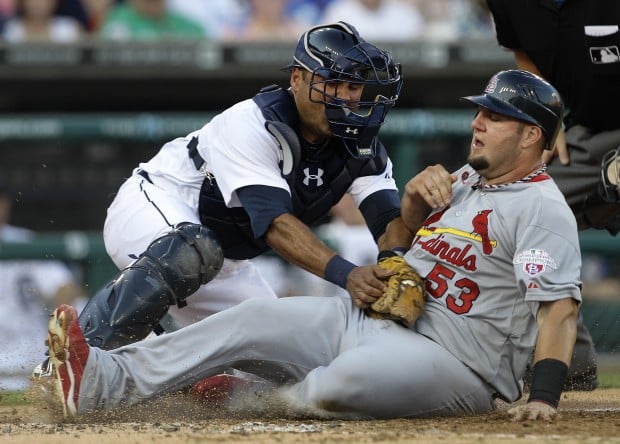 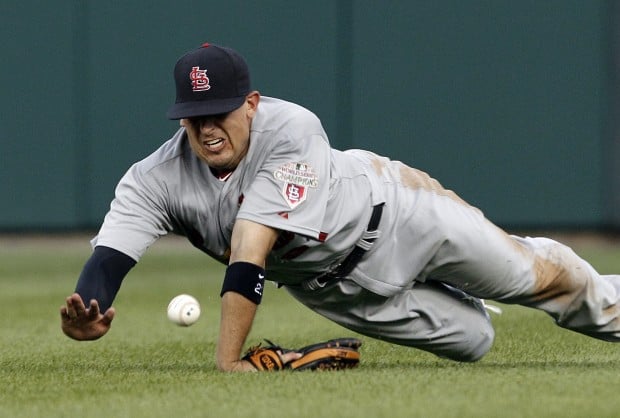 DETROIT • When righthander Jake Westbrook has that sinking feeling, it generally means that all is well.

For the fourth time this season, the wobbling Cardinals had a chance to fall under .500 Wednesday night. But the veteran Westbrook wouldn’t let them.

Pitching a complete game for the first time in 59 starts as a Cardinal, Westbrook (6-6) handled a Detroit team that had pounded him in American League play.

Westbrook carried a 5.58 career earned run average against the Tigers, but he allowed no earned runs and only one overall as he limited the Tigers to five hits and recorded 15 ground-ball outs in a 3-1 interleague win for the Cardinals that moved their overall record to 35-34.

Manager Mike Matheny said he hadn’t been aware of the Cardinals’ repeated flirtation with falling under the break-even mark.

"My response to whatever our record is is that we’re better than what it is," Matheny said.

After Westbrook gained the final out, on a ground ball, of course, he embraced catcher Yadier Molina, slapping him on the back three times and then pounding his fist one time into his glove.

"It’s a great feeling," said Westbrook. "Every time you go out there, you want to finish what you start. But to have an opportunity to do so is pretty special."

Molina savored the moment equally. "I care too much for the pitchers," he said. "Every time you see that happen to a great guy and great teammate like Westbrook, you have to be happy for him."

Before his last start, a 5-3 win over the Chicago White Sox, Westbrook had gone six starts without a win, giving up 48 hits in 31 innings. He had not had a complete game since May 16, 2010, at Baltimore when he was a member of the Cleveland Indians. But he had showed signs of what happened Wednesday night when he worked five scoreless innings against the White Sox last week before giving up a three-run homer to Adam Dunn in the sixth. Westbrook apparently built on that.

"Jake was terrific," said Matheny. "You could see he had good life on the ball and challenged guys."

Molina said the aggressive Tigers "were chasing everything down and away and inside, too."

Going against the grain that a sinkerballer is more effective when he is tired, Westbrook has had two strong games in succession while pitching with an extra day of rest each time. He has allowed an earned run in only one of his last 15 innings.

"I guess the older I get (he is 34), the better it is to get more rest," Westbrook said. "But it was a good one tonight. That’s what keeps me going, knowing that if I do zone (the sinker) in, I’m capable of doing something like tonight."

Matheny said he had a "short leash" on Westbrook, who threw 113 pitches, i.e., if anybody had got on in the ninth, Westbrook was out of the game.

"I know it means a lot to him to go the full game there," said Matheny. "He’s been frustrated a couple of times when he got himself into trouble and we had to come get him out. He certainly took it into his own hands today."

The Cardinals had 12 hits and probably should have manufactured more runs than they did, notably in the sixth when they had the bases loaded with nobody out and Molina grounded into a double play.

"That’s who you want there," said Matheny. "That’s the kind where you really want to make somebody pay."

That dual out, however, did score the lead run, and Molina came through in the eighth, even though he didn’t get official credit for it.

Get more Cardinals news, stats and photos on our free app for iPad, iPhone or Android.

Carlos Beltran, who extended his hitting streak to 12 games and reached base all four times he was at bat, drew a walk. He moved to second on a balk by Brayan Villarreal and came home on a two-out liner by Molina that glanced off the glove of shortstop Jhonny Peralta, who jumped to make the catch but couldn’t corral the ball and was charged with an error.

"That ball was scalded," said Matheny.

Westbrook said, "That extra run was nice to get. It helped me attack guys a little more."

Westbrook is 91-90 for his career now. And his 2012 season reflects that consistent inconsistency.

"I’m doing what I said I was going to try not to do," he said. "I’m having stretches. It’s a matter of making the bad stretches not quite as long ... and making your good streaks longer than your bad ones."

There were two other items of note. After his nose-dive had continued to two for 39, Rafael Furcal singled in each of his last two at-bats.

"That’s huge for his confidence," said Matheny. "And you know what he is for this team. He’s a sparkplug.

"We talked to him before the game, regardless of whether the hits come, we needed him to be himself. He was. He was chirping in the dugout and barking and saying stuff. Some of it you can’t understand. But it’s just funny. And then a couple of hits followed."

Not as funny was what happened in the Tigers’ sixth.

A late-breaking Allen Craig jammed his left wrist in a diving, but vain, attempt to snag Delmon Young’s blooper to right field. Craig, who has been hurt diving for balls in the outfield before, said he was cleared by the trainers, although he said he did feel a twinge in his final at-bat and then came out for defense.

"It’s never fun when you feel a little something," said Craig. "But it should be all right. It’s a minor deal. It didn’t feel good. But I think I got lucky. It could have been a lot worse."

"We’ll have to keep an eye on that," said Matheny. "When he went down, you were seeing bad things happen. But he popped back up and actually said it felt better the more he worked it."

Craig, who hurt his hamstring trying for a sliding catch earlier this season after suffering a broken kneecap banging into a fence in Houston last season, said he would not alter his style of defense.

They've scored three runs or fewer in 10 of 12 interleague games. Heart of order was 0 for 16

Offense is dull, stagnant and largely incapable of posing danger unless someone homers.

Help on the way for Cardinals?

Club may get M. Carpenter and Jay back very soon.

Bring your questions and comments for a live discussion with the P-D baseball writer.

Cards Talk: Sound off about the NLCS