After a second consecutive sub-.200 season, Cardinals shortstop Paul DeJong not surprisingly is seeking a change.

But he doesn’t mean that “clean slate” should be somewhere else. He isn’t angling for a trade. He wants to be the shortstop here.

“Yeah, definitely. I want to be here and finish this contract strong and set myself up for the future,” DeJong said after the Cardinals had been bounced from the wild-card round in two games by the Phillies.

Next year, DeJong will make a base of $9 million in the sixth and final year of a six-year contract he signed after his rookie season of 2017, when he hit 25 homers, drove in 65 runs and batted .285, which by far has been his highest average in the majors.

He hit 30 homers but batted only .233 in his All-Star year of 2019, and his past two years have been disasters. After batting .130 for the first month of the 2022 season, he was banished to Class AAA Memphis, where it appeared he had rebranded himself by hitting 17 homers, driving in 54 runs and slugging .552 in 201 at-bats.

Upon his return to the Cardinals in late July, the 29-year-old DeJong was inserted into the lineup and gave the Cardinals a two-week flash of what they had seen before and had hoped to witness again. Homering in Washington in each of his first two games back, DeJong hit .295 for a 13-game span with four homers and five doubles.

Then, just as suddenly, he reverted to the ghastly — even more so — numbers of the first month of the season. DeJong, who would lose his job again, went 9 for 89 with 40 strikeouts to wrap up his season. He didn’t start in either of the playoff games with the Phillies, despite having two homers (in 2017) off dominating Phillies ace Zack Wheeler and one off Aaron Nola.

As the Cardinals went into their second week of the offseason, president of baseball operations John Mozeliak said, “I think everybody would agree that there’s a level of frustration with the year (by DeJong), but there’s also a little bit of optimism — because you did see it for two weeks.

“The most important element in all of this is: What is the offseason going to look like for him? And does he have a strategy to get himself where he needs to be on a consistent level?

“Our staff is certainly going to be challenged coming up with that curriculum. And then you have to hope he’s willing to buy into it and try it.”

DeJong said he had reverted into “old patterns, instead of keeping the faith. Like when I first came back up, it wasn’t about the stats, it was just about being here,” he said

“I think I just lost sight of myself a little bit, that’s all.

Mozeliak said, “He was seeing it. Unfortunately, he couldn’t maintain it.”

In the midst of his .101 finish, DeJong had just one home run — a grand slam at Arizona on Aug. 20 — in the final two months. His confidence, if not shattered, was eroded deeply. The pitchers had rediscovered his weaknesses and had attacked them.

“You have to be anchored to the process in place and have a lot of confidence in that,” Cardinals manager Oliver Marmol said. “I do feel that at parts of the season, he was hoping that things went well and then basing his next day’s confidence off that, which is a difficult thing.”

DeJong said, “I still think if I had had 400 at-bats, I could have definitely done what I needed to do.”

But Marmol couldn’t afford to give DeJong that many at-bats.

“We just didn’t see a lot of that inner confidence, unfortunately,” Marmol said.

DeJong largely was reduced to playing defense late in close games and, in that role, didn’t seem to let his offensive travails spill over.

He is aware that there is work to be done in the offseason, both from a confidence standpoint and then with his swing.

“And then whenever games start, I’m in the mindset of having the faith, understanding that I can do this,” he said. “Believing in myself.”

“Also, being right with my swing. Physically, I felt good all year. I didn’t miss any time except with a little hand thing (hit by pitch) in Memphis.

“After these last few years, I have a better idea of what I don’t need to look like. So if I’m looking like that again, I can know what’s going on.

Once one of the top fastball hitters in the league, DeJong consistently would foul off fastballs in the strike zone this season and then swing futilely at high fastballs out of the zone.

“I was missing pitches in the zone,” he admitted. “They told me my ‘out of zone’ numbers were pretty good, in that I was seeing the ball well, but I wasn’t hitting the balls hard that I should have. Those would have been big difference makers for me.

“It’s just a matter of putting myself in position to hit those pitches.

“If I can just hit the pitches I’m supposed to hit, then my season looks a lot different.”

For the season, DeJong struck out 33 % of the time in 237 plate appearances, a totally unacceptable number. Fixable? We shall see.

“He’s only 29 years old,” Mozeliak said. “When you look at what he’s capable of doing, you look at the positive, and he’s still a solid defensive shortstop.

“When you look at him from a statistical side, obviously a .157 batting average is going to jump out to a lot of fans. A little more concerning is the strikeout rate.

“It was encouraging that he got more walks this year, but ultimately, where’s the power? Where’s the consistency that we saw earlier in his career? You look back to 2021, and he had a 100-point higher (slugging percentage) than he had this year.”

“It was an unfortunate year for a lot of reasons,” Marmol said. “Obviously, it was a disappointing one for him.”

“Trying to get him back to what he looked like before the pandemic is where our goal has to be,” Mozeliak said.

Mozeliak, who may seek shortstop help from outside the organization, certainly will entertain offers from other clubs for DeJong, but the Cardinals might have to pay some of the contract unless a high-salaried veteran came in return. Mozeliak isn’t disposed to do anything so far.

“I haven’t made any decisions on who will be here and who won’t,” he said. “I would say that as of right now, there is a strong probability that he is back with us.

“But I hope there’s some urgency that things have to be different. He has to do something different. ‘Rinse and repeat,’ is not going to work here.

“Something has to change. Hopefully, we see that.”

Marmol concurred that DeJong needed to “take advantage” of the offseason. “A lot of it is in his court,” Marmol said.

“An overhaul of your mechanics is hard to do in-season, in real time, against the highest level of competition.”

From his perch, unsteady as it may be, DeJong said, “I know I can add value to this team. I’ve just got to start strong and finish strong.”

Marmol said, “The reality of it is that the organization has been patient in giving him opportunities. I’d understand why he’d want to be here.”

The Cardinals have team options on DeJong for $12.5 million in 2024 and $15 million in 2025, with total buyouts amounting to $3 million. Those options don’t seem likely to be exercised, no matter what happens in 2023.

Hummel: Mets and Dodgers spent a lot more money to be in the same capsized boat as Cardinals 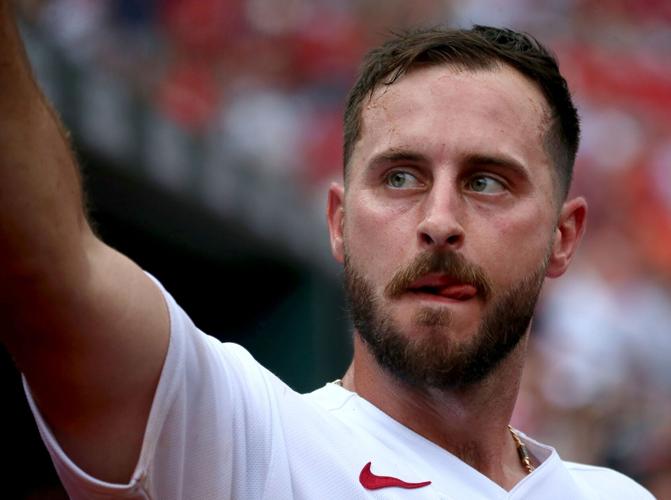 Cardinals shortstop Paul DeJong acknowledges the cheering crowd after the Cardinals challenged him being called out at the plate in the fifth inning of a game against the Yankees on Sunday, Aug. 7, 2022, at Busch Stadium. 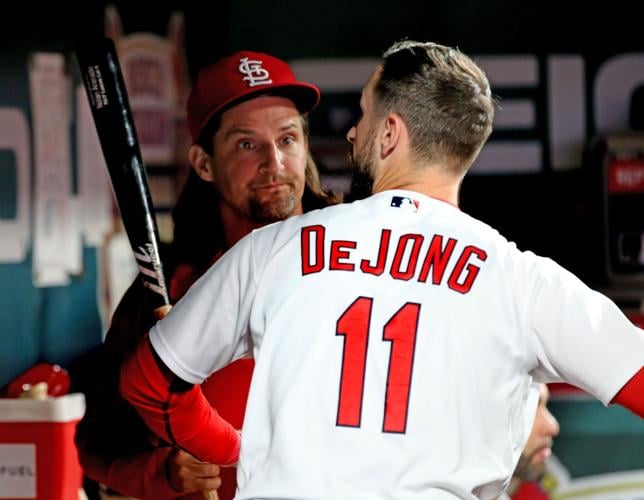 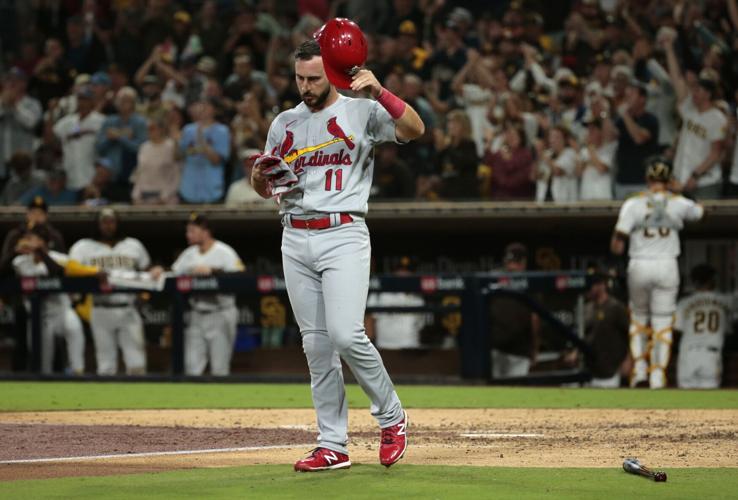 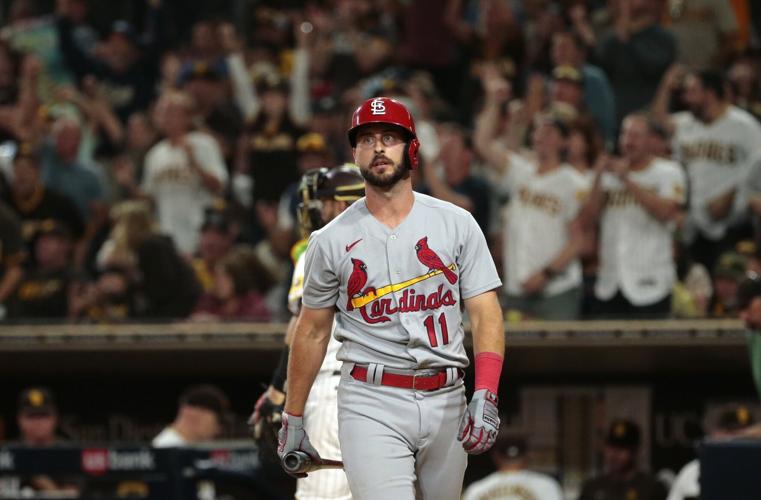 Cardinals shortstop Paul DeJong strikes out with two men on base to end the seventh inning against the Padres on Wednesday, Sept. 21, 2022 at Petco Park in San Diego. 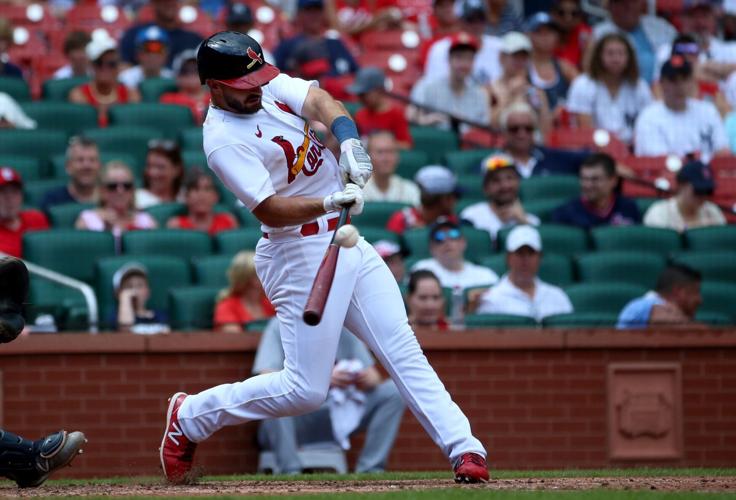 Cardinals shortstop Paul DeJong hits an RBI double in the fifth inning of a game against the Yankees on Sunday, Aug. 7, 2022, at Busch Stadium. 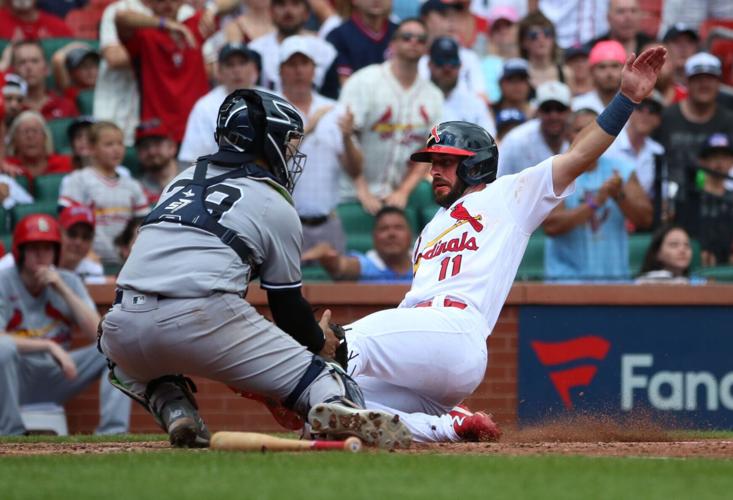 Cardinals Paul DeJong avoids a tag from Yankees catcher Jose Trevino, scoring on a Tommy Edman single in the fifth inning of a game on Sunday, Aug. 7, 2022, at Busch Stadium. 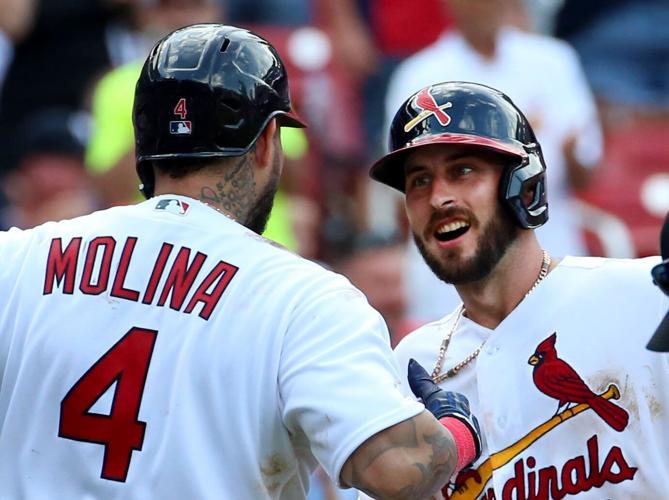 The Cardinals' Paul DeJong is congratulated by Yadier Molina after hitting a three-run homer in the eighth inning on Sunday, Aug. 7, 2022, at Busch Stadium. 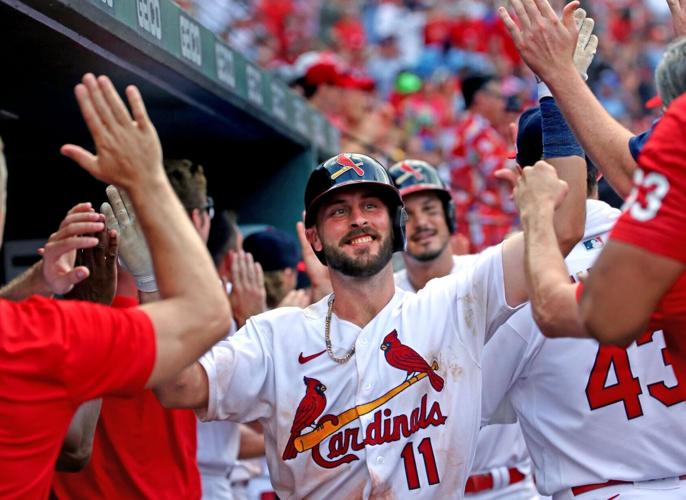 St. Louis Cardinals Paul DeJong (11) is congratulated by teammates in the dugout after hitting a three-run home off New York Yankees relief pitcher Scott Effross (59) in the eighth inning of a baseball game on Sunday, Aug. 7, 2022, at Busch Stadium in St. Louis. Photo by Laurie Skrivan, lskrivan@post-dispatch.com 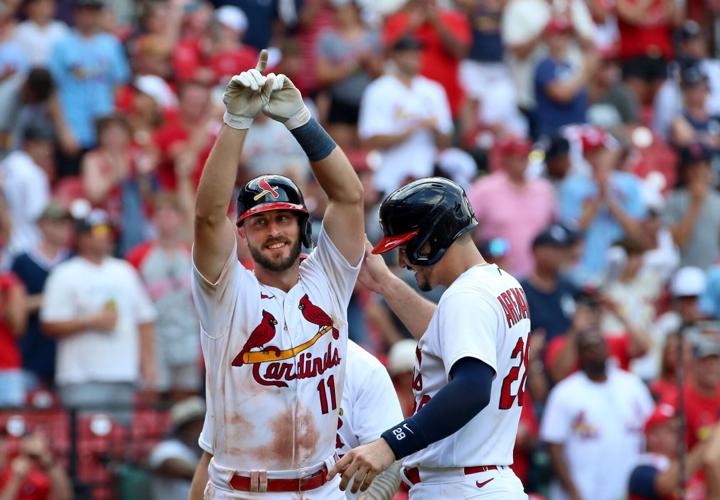