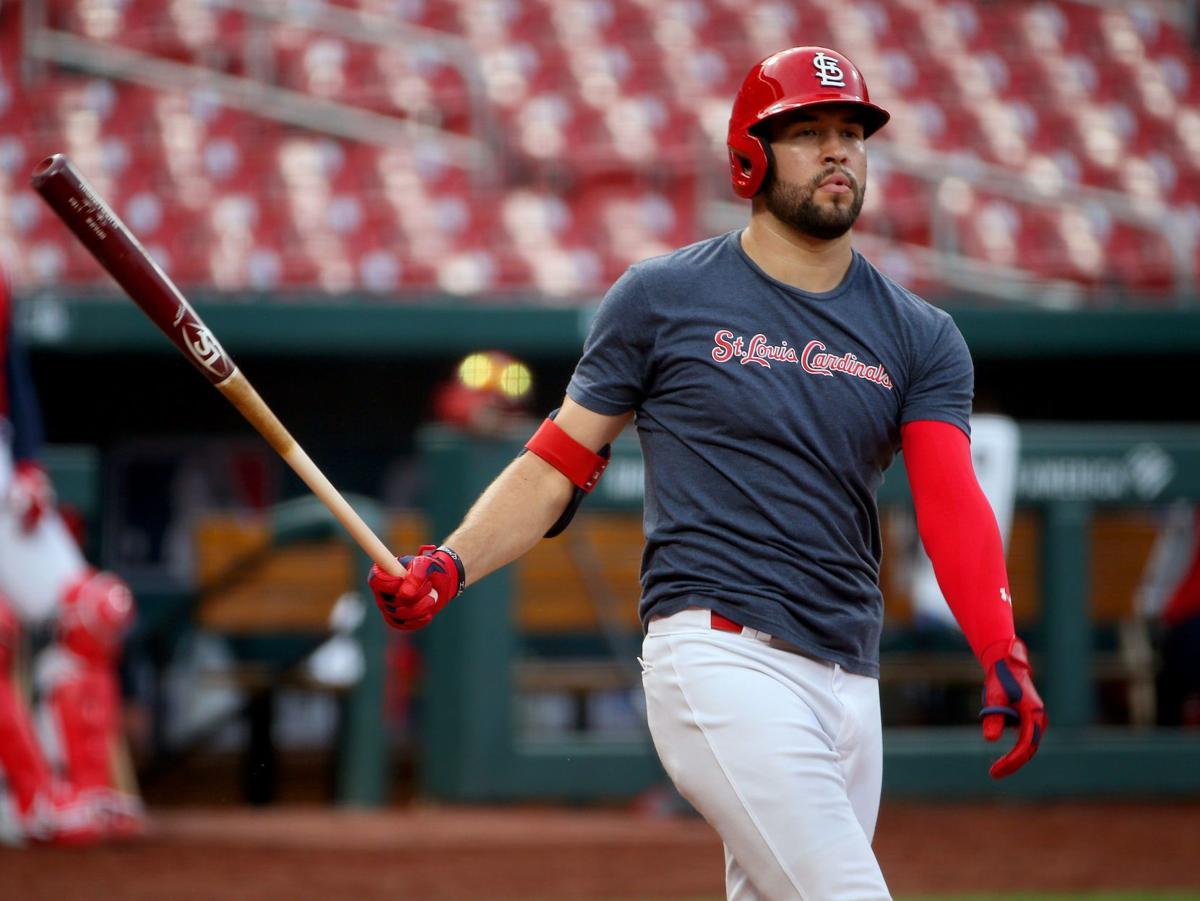 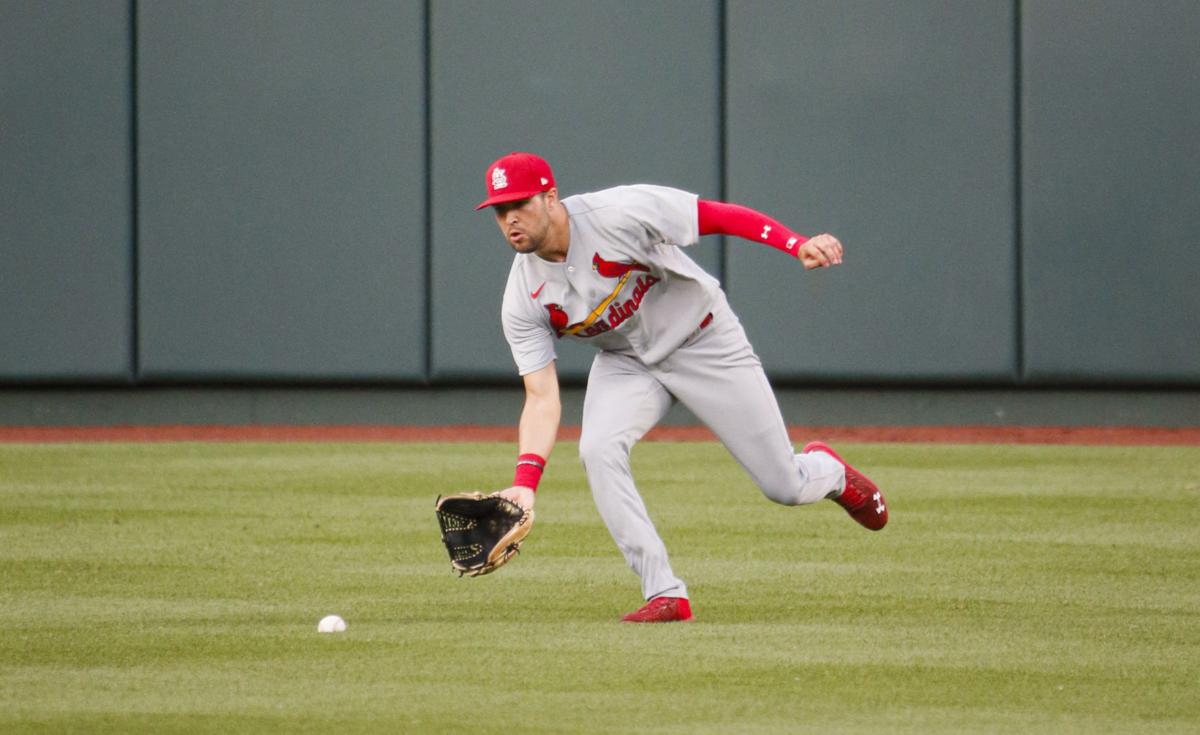 On the same day the Cardinals were originally scheduled to walk through an Iowa cornfield and into the magic of a made-from-Hollywood ballgame, they hope only to emerge from a fog.

The Cardinals remained on their ongoing regimen Wednesday of quarantine, daily testing for COVID-19, no games, and no team workouts. Unsure of when they’ll next play a game, the Cardinals continued putting plans in motion for what their club will look like when it does and how top prospect Dylan Carlson will be a part of it.

As they await clearance from Major League Baseball to regather at the ballpark and resume their schedule after a coronavirus outbreak, the Cardinals must also add reinforcements to a roster that has been mothballed for more than two weeks. Two of the team’s most recent positive tests for the virus were outfielders, Lane Thomas and Austin Dean, and the Cardinals need to tap into the talent at their alternate site for players who are closer to game speed.

That paves the way for Carlson’s promotion and other moves being planned, sources indicated.

For the third consecutive evening, the team did not hold a formal update on its situation, delaying it a day. Through a spokesman, the Cardinals said they had “no new information to provide but will on Thursday.”

Commissioner Rob Manfred told the Post-Dispatch on Monday that he’d like to see at least three consecutive days with no new positives before the Cardinals return to the field. The Cardinals had encouraging results from Sunday and Monday tests, according to two sources, and needed the same Tuesday to get to three consecutive clear and back on the field at the earliest Thursday.

The Cardinals’ next scheduled game is Friday — the game against the White Sox that was supposed to be a jewel event Thursday at the Field of Dreams in Dyersville, Iowa. That was cancelled for 2020, and the entire three-game series assigned to Chicago. Already the Saturday game has had its start time pushed back to accommodate additional time for test results.

Manfred described how Major League Baseball recognizes it would not be fair to have the Cardinals go from quarantine to competition without a few workouts, and that the leagues would adjust their schedules accordingly. He mentioned one way for the Cardinals to “manage that legitimate risk” was to turn to players from the satellite camp in Springfield, Mo. — players Manfred said “who are not shut down” and have been doing baseball activities.

Carlson, 21, has been part of that Springfield flock since being assigned there on the eve of opening day. The Cardinals have maintained that his opportunity was near, but that the first swings at starting would go to returning outfielders like Tyler O’Neill and Thomas. John Mozeliak, president of baseball operations, has steadfastly maintained that Carlson would reach the majors when it was certain he would play often, not watch.

The standard was clear. The opening is there.

If they start him, he will come.

In Springfield, a mix of prospects and recently drafted talents have been competing in live batting practice and going through simulated game situations. The camp, run by Jose Oquendo, has continued, an official confirmed, while the major-league team has been locked-in for six days at a Milwaukee hotel and another week at their homes in St. Louis. The satellite group also includes pitchers Johan Oviedo, Seth Elledge, and the organization’s pitcher of the year Angel Rondon. Due to injury and positive COVID-19 tests, the Cardinals’ current group in Springfield has, at most, only four players on the 40-man roster.

This week the Cardinals have made moves to rearrange the 40-man roster, add depth to Springfield, and additional moves are expected before they play a game.

Miles Mikolas, who is out for the season with a tear in his flexor tendon, was moved from the 10-day injured list to the 60-day, according to official transactions. That removes him from the 40-man roster. To the camp, the Cardinals have added pitchers Ryan Meisinger and Jesus Cruz, and a source said catcher Pedro Pages also has reported. The Cardinals can move any players who have tested positive for COVID-19 off the 40-man, but that will require a subsequent transaction to clear a spot for that player to return.

On Sunday, Cardinals management said they had not heard of any players wishing to opt-out of the season, as players can at any point. It's not yet clear how some Cardinals feel after the latest spread of the outbreak and what the lengthy stretch between games means for their health. The mid-month pay period offers an exit ramp from the season, if players choose.

The Cardinals have had 17 individuals test positive for COVID-19 since July 29, the last time they played a game. Ten of those are players.

Three players — Thomas, Dean and pitcher Ryan Helsley — tested positive this past weekend, forcing the Cardinals off the field less than 48 hours after they had just returned to it from their isolation in Milwaukee. They had been cleared by MLB to leave the hotel and travel, but new positives brought renewed concern and alarm.

Helsley exhibited symptoms of the novel coronavirus last Thursday, and KMOV/Channel 4 reported he had his hair cut that same day. The station confirmed that the Cardinals did not notify the hairstylist as part of contact tracing or protocol compliance, and in a statement to KMOV, Mozeliak said “this was an oversight unfortunately. We regret this and will take more ownership in the future.” As a result of the report, KMOV said Helsley called the hairstylist to apologize.

All-Stars Yadier Molina and Paul DeJong, who both tested positive in Milwaukee, are at least two of the players starting the protocols for a return. They had to wait a minimum of seven days and be asymptomatic. The team’s current quarantine has lasted long enough for them to be tested as many as four times. Each player needs two consecutive confirmed negative tests at least 24 hours apart and also to go through an antibody test and cardiac evaluation before rejoining the team.

The three positives this past weekend leaves the Cardinals with three openings on the roster, two fewer outfielders, and room to maneuver. And reason, too.

The Reds played their 18th game Wednesday, the Atlanta Braves their 20th. The Cardinals remain stuck at five. Manfred said it’s unlikely the Cardinals can complete a 60-game schedule with the calendar shrinking. Before they can look at all the games left to play, the Cardinals must get clear of the outbreak. When that happens, let the doubleheaders commence.

One of Shildt's coaches had new positive test for COVID-19, according to source. ESPN reported Jose Oquendo is being brought back to coach third base