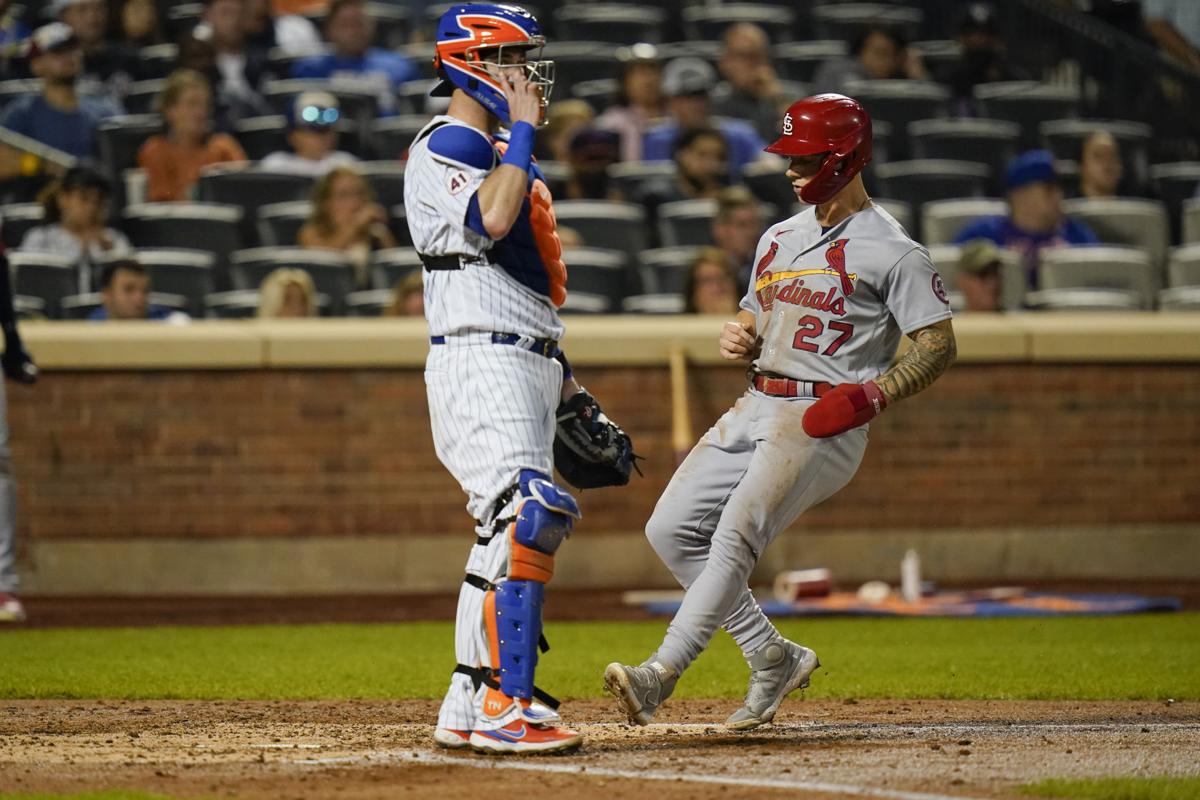 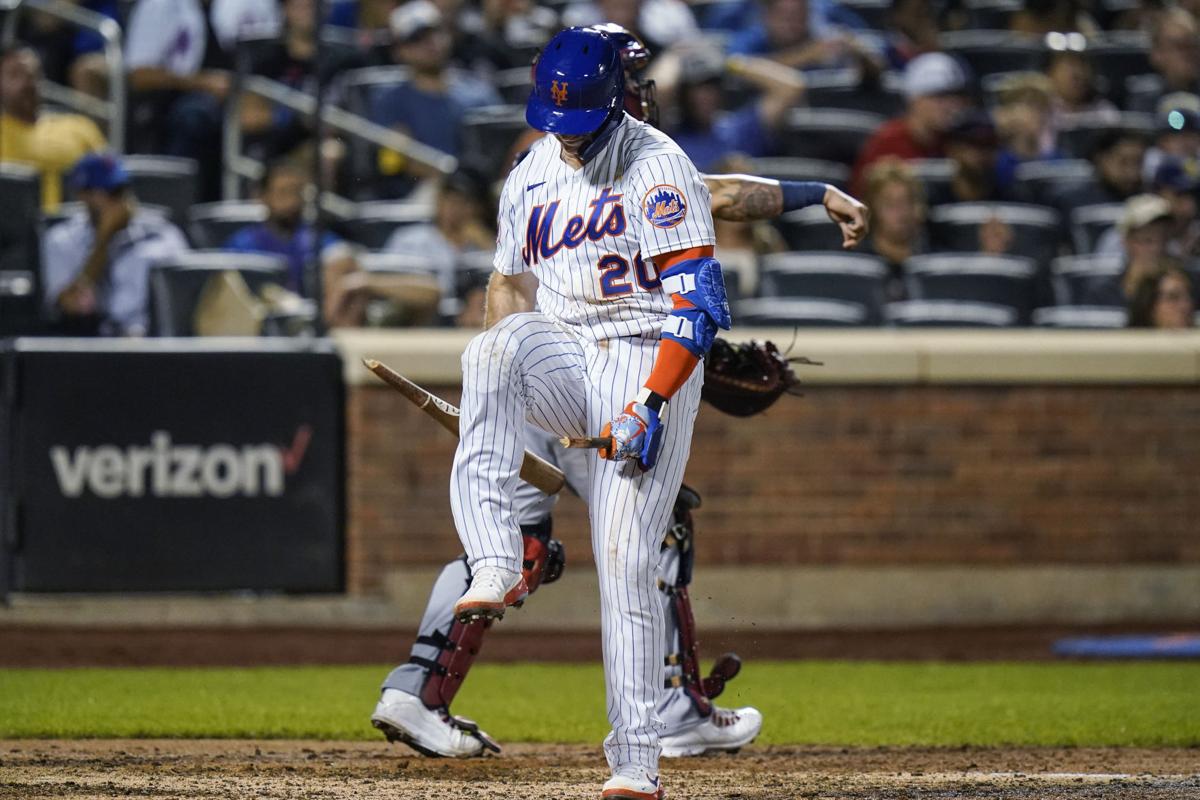 New York Mets' Pete Alonso (20) breaks his bat after striking out during the fifth inning of the team's baseball game against the St. Louis Cardinals on Tuesday, Sept. 14, 2021, in New York. (AP Photo/Frank Franklin II) 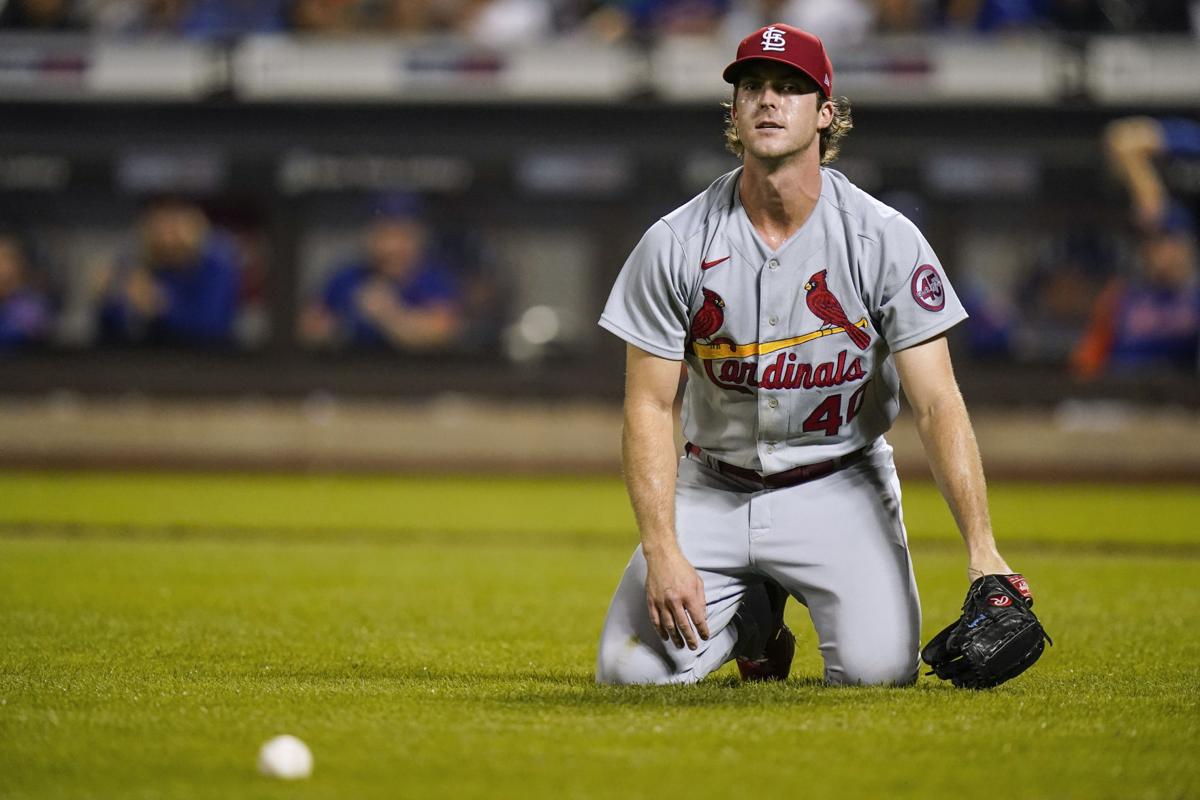 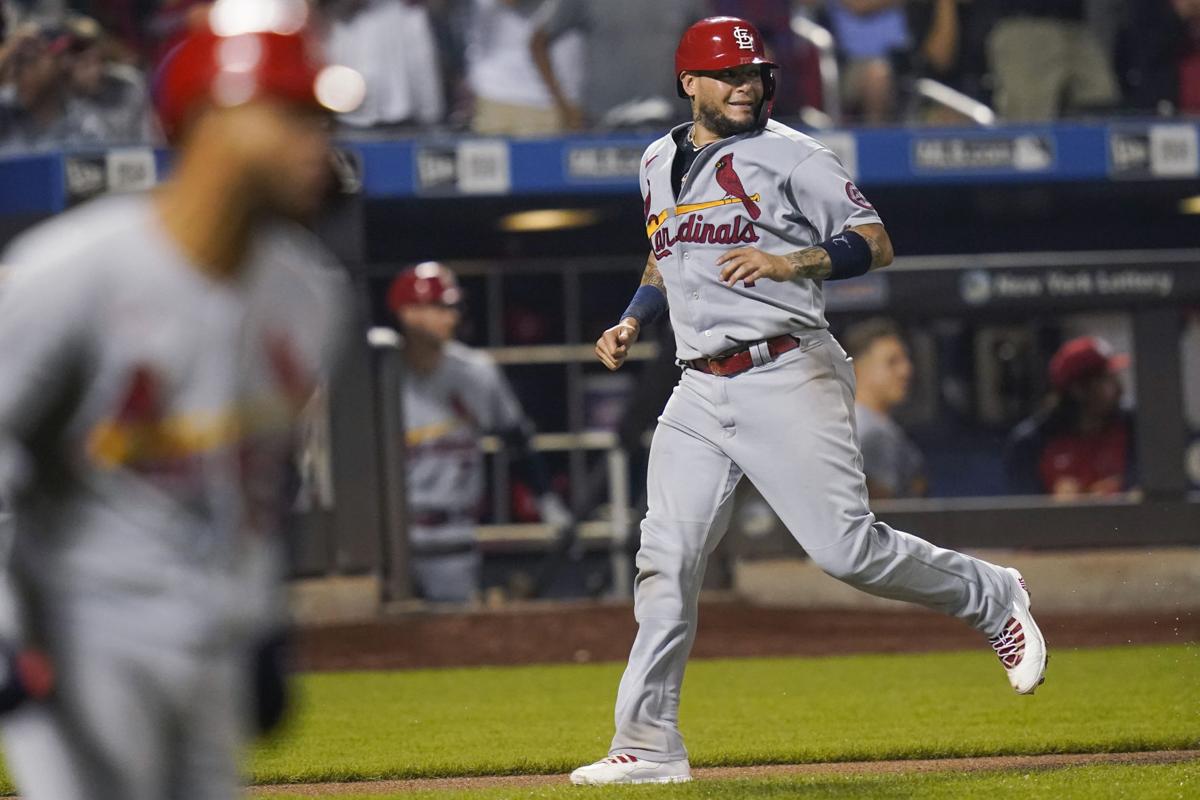 St. Louis Cardinals' Yadier Molina smiles as he scores on a single by Edmundo Sosa, left, during the 11th inning of the team's baseball game against the New York Mets on Tuesday, Sept. 14, 2021, in New York. (AP Photo/Frank Franklin II)

NEW YORK — Given the winding, unpaved, hilly, and sometimes jarring scenic route the Cardinals took to find their lane into October, it’s fitting that the win that put them ahead meant coming from behind before things really got bumpy in extra innings.

A lead claimed in the eighth vanished on the first pitch of the ninth and hurtled the Cardinals and New York Mets into the night. The Cardinals survived the 10th inning with a golden double play and seized the lead in the 11th with a series of batters from the bottom of the lineup, two of whom were still on the bench when extra innings started. Edmundo Sosa roped the tie-breaking RBI single and Andrew Knizner, as a pinch-hitter, had a two-run single that set the difference in a 7-6 victory at Citi Field.

The Cardinals exhausted every corner of their roster, needed every facet of their play, but the reward was a new view on this season.

The win, the Cardinals’ sixth in seven games, vaulted them into the lead for the National League’s second wild card. They moved one-half game ahead of division rival Cincinnati and a full game ahead of struggling San Diego. With a home series this weekend against the Padres and 18 games remaining on the schedule, the Cardinals are, for the first time in weeks, in control of their own playoff destiny.

A race that's been stuck in reverse is now theirs to drive.

“We’ve been waiting to bust out all year,” said outfielder Tyler O’Neill, whose two-run homer in the eighth provided the lead lost moments later. “This is crunch time. We’re the Cardinals. September baseball. Stuff’s important. Here to win. That’s what we do.

In the 10th, the teamwide trait they’ve been able to count on all season once again pulled them back from a loss. With the winning run at third base and one out, shortstop Francisco Lindor nudged a groundball down the first-base line. Paul Goldschmidt gloved the grounder, tapped first for the nearby out and then threw home to Yadier Molina. That trapped the lead runner between third and home, and he was quickly tapped out by Nolan Arenado to complete the double play.

A miss is a loss.

“That was a fantastic play,” manager Mike Shildt said. “Obviously a game-saving play. It was a high baseball I.Q. play.”

Sosa summarized: “It was a very incredible play.”

That essential play was followed by a three-run 11th that hinged around a single by Jose Rondon, a defensive replacement in the 10th, and Knizner’s two-run single. Knizner’s single to center that scored Rondon and Sosa to provide the eventual game-winning run.

As if to illustrate the elasticity of the roster, the last pitcher available in the game not named Miller, Kwang Hyun Kim, pitched the 11th. He sidestepped the tying run on second base and his own error to secure his second career save, his first since the opening of 2020.

The Mets tied the game on the first pitch of the ninth inning. Javier Baez, that flamboyant and furiously gifted fielder who played so long on the north side of the Chicago, greeted Cardinals closer Giovanny Gallegos’ with a solo homer off the blue wall beyond the left-field fence. Baez’s 31st homer of the season and ninth since the trade that sent him to the Mets leveled the game suddenly at 4-4 to shove the game into extra innings. A lead taken by force had vanished in the same manner.

O’Neill nearly took a bite out of the big red apple with a two-run homer to center field that vaulted the Cardinals out of a one-run deficit and into the lead that Gallegos tried to cement in the ninth inning.

O’Neill’s 26th homer of the season came with one out in the eighth inning and it was a harbinger of the boos that ushered Mets reliever Jeurys Familia off the field two batters later with two runners still on base. O’Neill’s home run scored Goldschmidt, who reached base three times through nine innings, and that duo scored the first four of the Cardinals’ runs.

They had three of the Cardinals first six hits.

The inning that gifted the Mets their second lead of the game also sparked a clash in the Cardinals’ dugout.

Drawn into the game in the fifth inning, righthander Daniel Ponce de Leon, a member of the opening day rotation who through injury and assignment has become a long reliever, walked the bases loaded with one out. He and catcher Molina cycled through signs, and the walks prompted two different conferences on the mound. The mess invited by all the walks was quelled by reliever Kodi Whitley, who held the Mets to a sacrifice fly before easing out of the inning down only by a run.

The inning over, the argument started.

In the Cardinals dugout, Molina and Ponce de Leon had to be separated by coaches as they exchanged words. First base coach Stubby Clapp got between Molina and Ponce de Leon. Bench coach Oliver Marmol gave his title a new meaning by leaping over the bench to get to Ponce de Leon and, with manager Shildt, usher him to the other side of the dugout — and then out of it and into the clubhouse. The flashpoint of the argument was not clear or caught on camera, but the subject of it appeared to be the pitch calling and walks in the fifth.

“Things happen. Heat of the moment,” Shildt listed. “Brotherly love. Cameras catch every little thing. It was not that big of a deal.”

Jake Woodford allowed two runs in the first inning of his four-inning outing, and yet there wasn’t a hard hit ball in the group. He allowed an infield single, another that slipped through the shift, and a blooper. One of the runs he allowed was on a bunt by Baez that nearly reached Woodford on the mound for a popup. Later in the game, Woodford stepped off to nab Baez as he tried to take second on the righthander. That too didn’t seem like a big deal at the time, but the game was rich with small moments that build to the big, wild, topsy-turvy ending. O’Neill took third on a single to be in position to score the Cardinals’ tying run on a sacrifice fly in the fourth.

Goldschmidt's leadoff double ahead of O'Neill's RBI in the fourth was the Cardinals' first baseman's 1,549th of his career. He moved ahead of Delino DeShields for careers hits by a player born in Delaware — another first for Goldschmidt from the first state.

Rondon had used more gloves as a fifth infielder and an outfielder in the 10th inning than he had swings before his single in the 11th. The double play that decided the game was not the first Goldschmidt turned to pry the Cardinals free from an inning. And there was Alex Reyes (8-8), former closer, thrust into a spot for the second consecutive night because of availability. He pitched the scoreless 10th with help from Goldschmidt's savvy and Arenado's tag to push the game into the 11th.

Because what's another inning for a season that's taken them this long to catch up to the contenders?

They're no longer looking at another team's taillights.

Time to turn on their brights.

“There was just a lot of things on display that were little things that lead to big things, and we did some big things as well,” Shildt said. “That was a whale of a baseball game. We’re looking out the windshield, not the rearview mirror. We’re looking at what’s ahead. We’re going to get after what’s in front of us.”

On Roberto Clemente Day, Molina is one of the players on the field to wear the Hall of Famers No. 21.

New York Mets' Pete Alonso (20) breaks his bat after striking out during the fifth inning of the team's baseball game against the St. Louis Cardinals on Tuesday, Sept. 14, 2021, in New York. (AP Photo/Frank Franklin II)

St. Louis Cardinals' Yadier Molina smiles as he scores on a single by Edmundo Sosa, left, during the 11th inning of the team's baseball game against the New York Mets on Tuesday, Sept. 14, 2021, in New York. (AP Photo/Frank Franklin II)