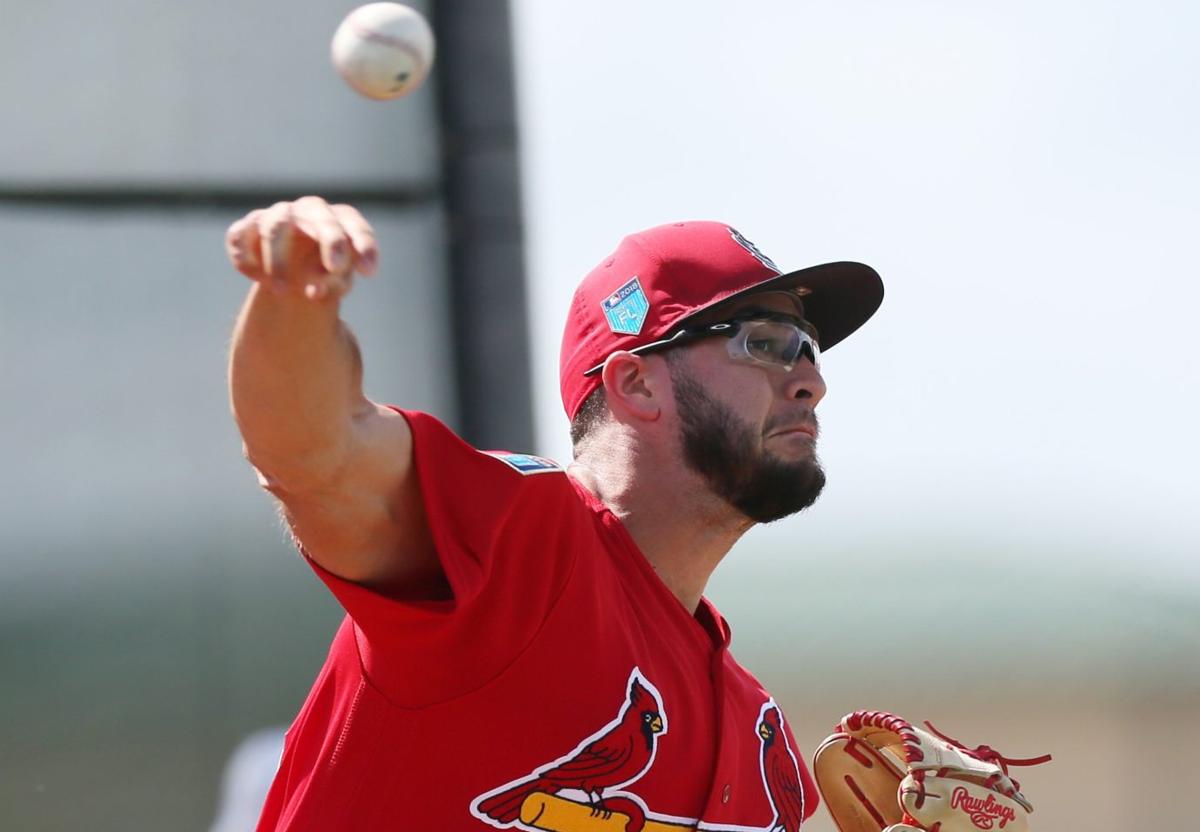 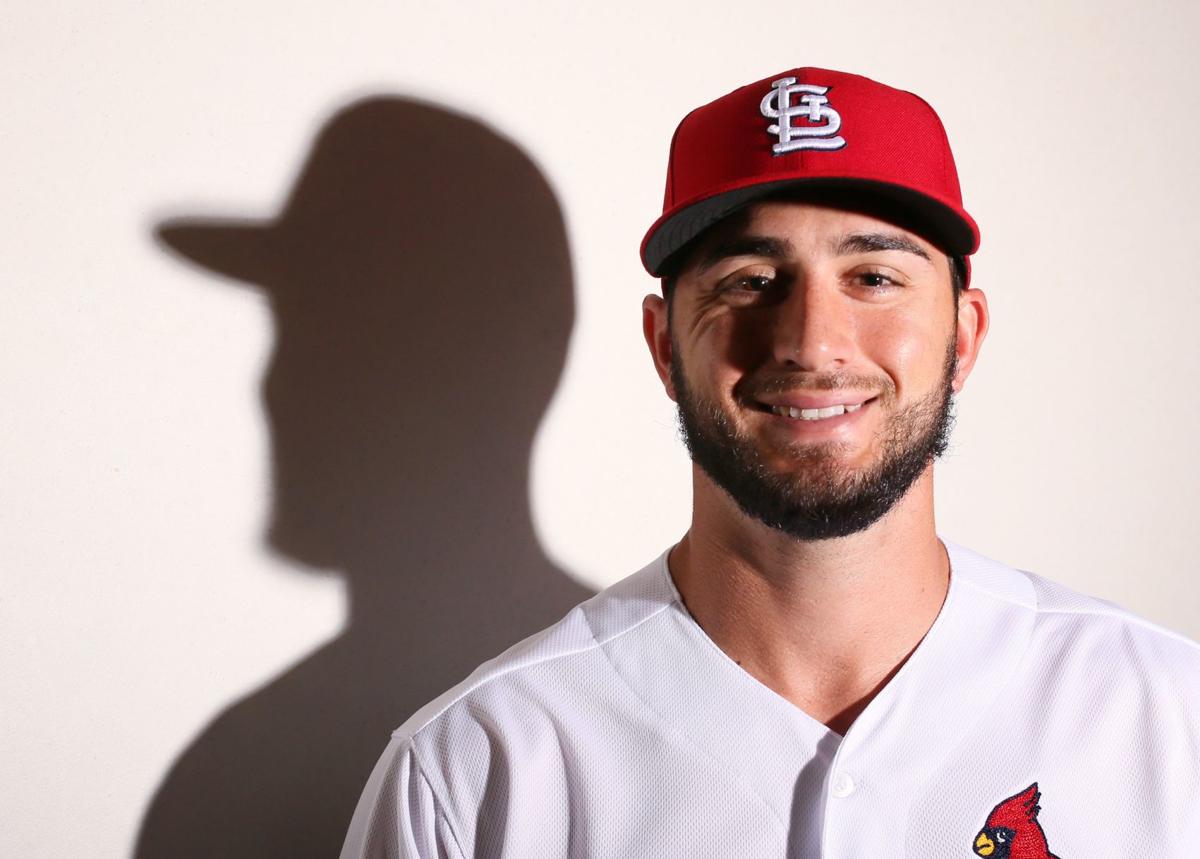 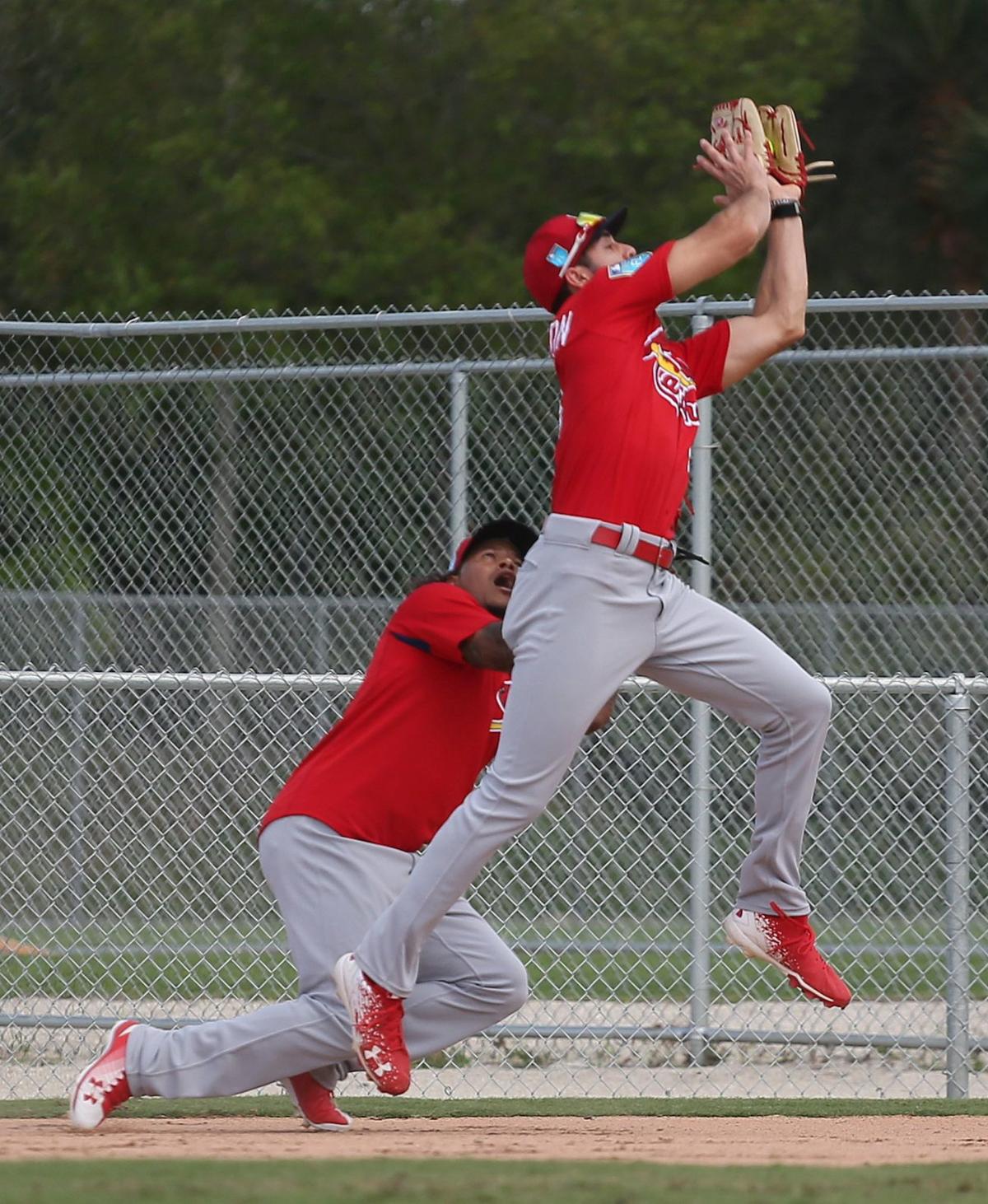 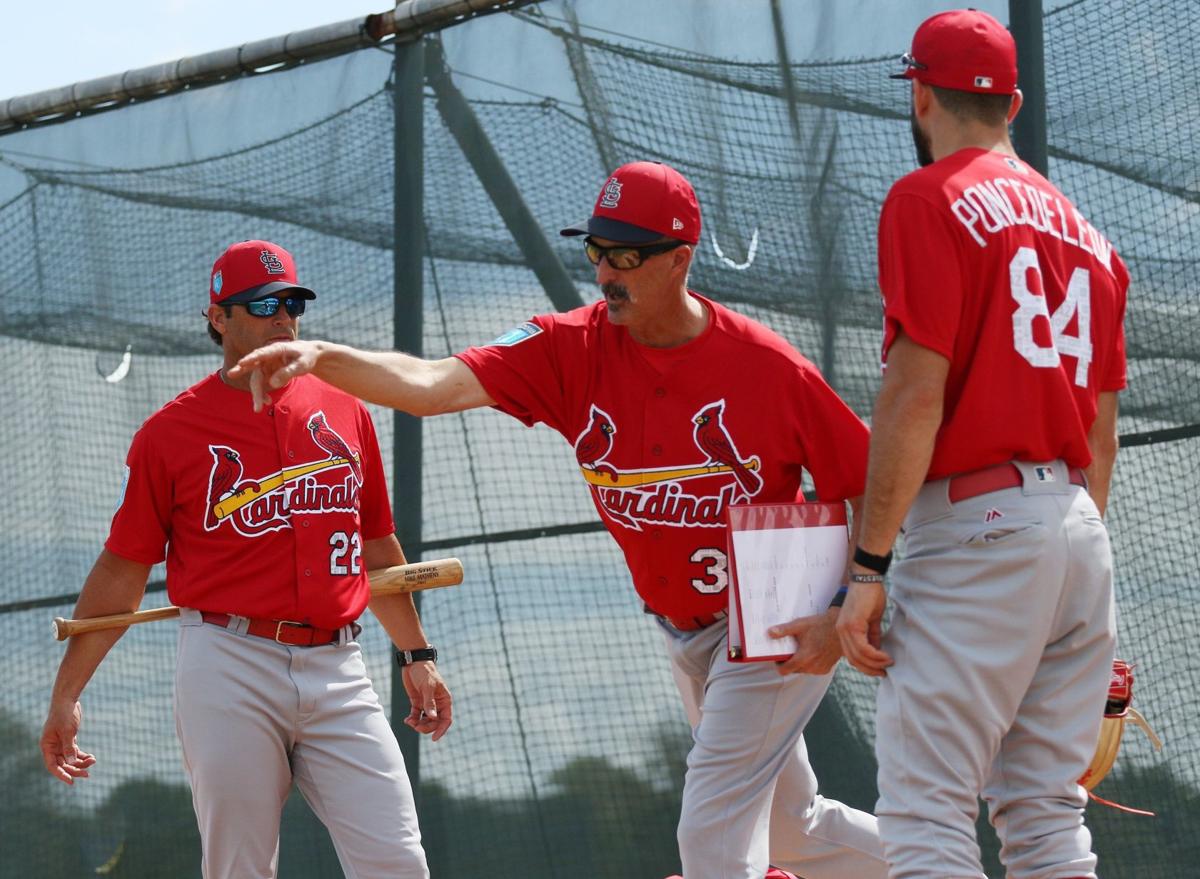 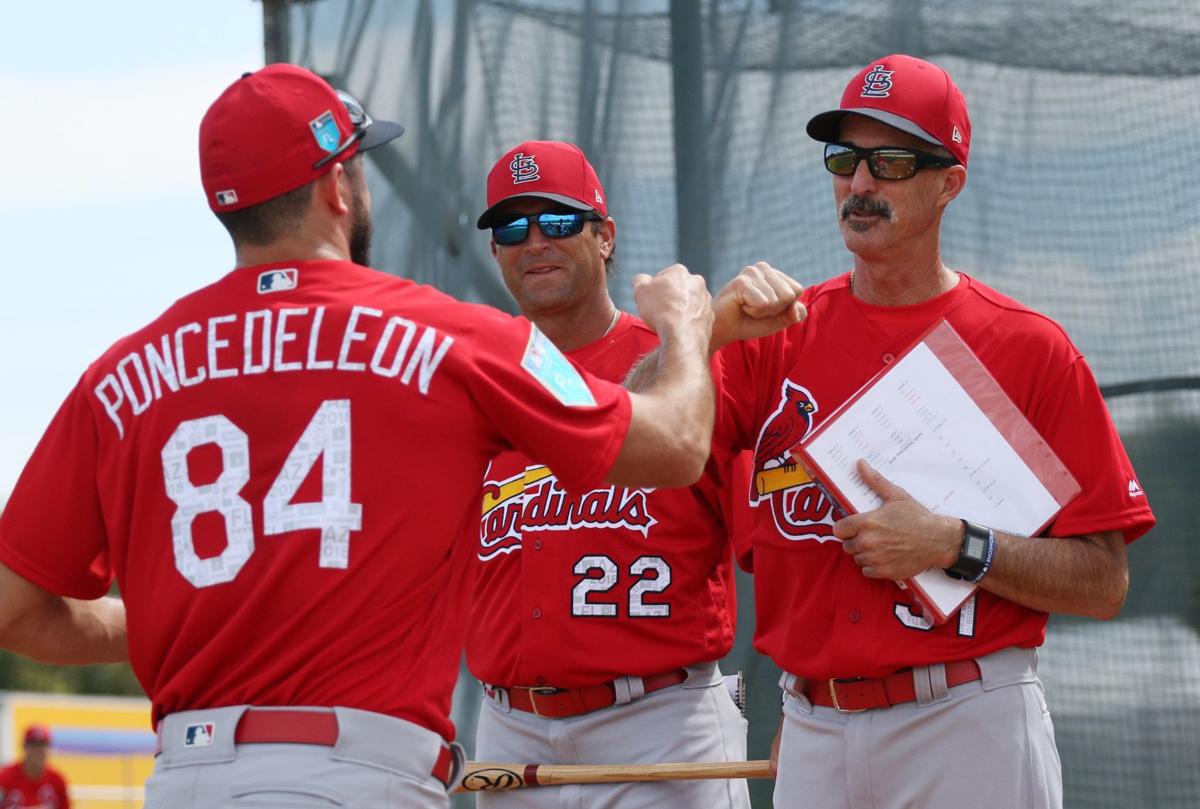 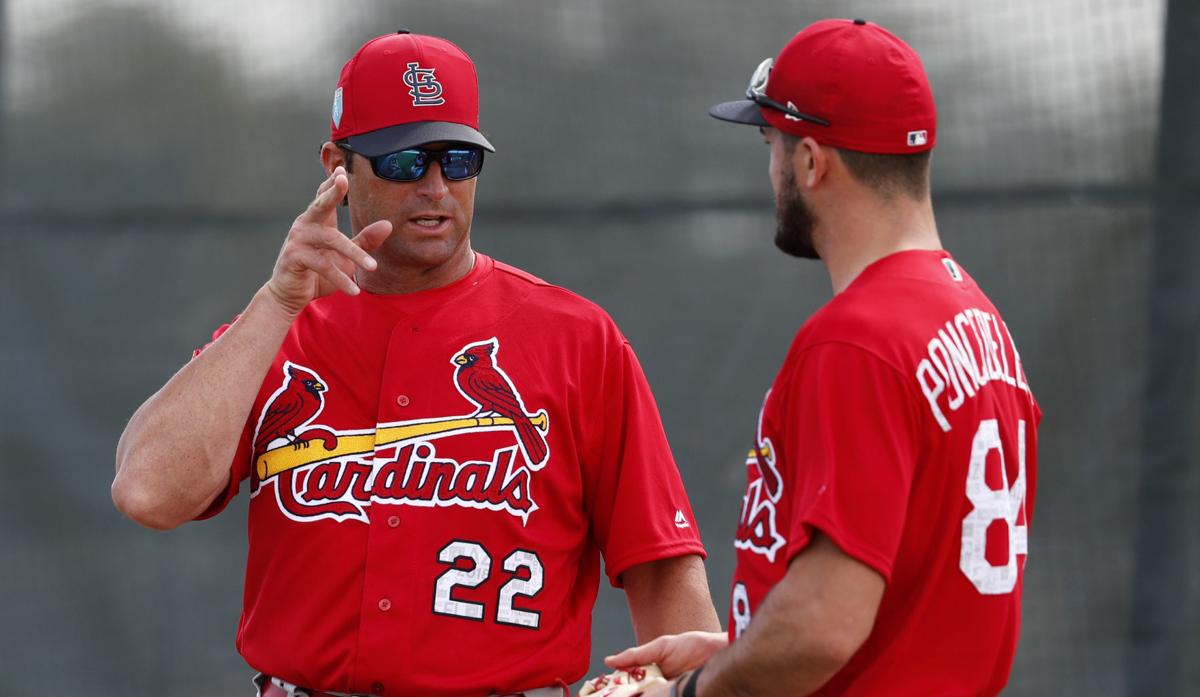 JUPITER, Fla. • With her husband warming up in the distance for an appearance that was impossible to consider when they had wheeled him in for emergency surgery at an Iowa hospital last May, Jenn Ponce de Leon juggled their wriggling son and tried to steady her own butterflies.

“I’m getting more nervous as it’s getting closer,” she said. “But he knew, he knew all along that he was coming back. He didn’t have a doubt. He only had a lot of persistence.”

Cardinals prospect Daniel Ponce de Leon made his spring debut Sunday and threw his first pitch in a game since the last one was lined back at him, fracturing his skull and threatening his life. Jenn, their son Casen, Daniel's father Ramon, and four other friends and family members sat in Section 206, Row 5 at Roger Dean Stadium for pitches Daniel always insisted he would make. Ramon had watched his son’s warmup in the bullpen and returned to his seat to record every pitch.

He spoke softly, fearing his son might hear him.

Daniel found the feel for his cut fastball in the second of two innings. He got through the first inning by playing a four-seam fastball off his curveball and limiting the Astros to a run. He struck out Alex Bregman, the first batter he faced, with an elevated fastball that came after the curve. Then he threw a scoreless sixth with two groundouts and an assist from an outfielder.

Before the outing, teammates who were with him at Class AAA Memphis on May 9 referred to Sunday’s game as “extremely special” and a “relief.” Daniel kept it cool. Manager Mike Matheny told him it was a “big deal” when Daniel returned to the dugout, his day done.

“Eight months ago did you picture you’re going to be standing here right now?” the manager asked him.

“As soon as it came out, I knew that,” Matheny said later. “Let’s be honest. There are no certainties. What you went through was tough, and the fact that you’re right here right now where you are and that stuff looks like it looks, this is a big day.”

Daniel, who is in the process of legally changing his name from Poncedeleon, as it’s been, to Ponce de Leon to match his wife and son and the family’s decision, had spring outings like Sunday’s before. A year ago, he caught the eye of the major-league coaches for the movement that added to his strong arm. He had a better feel for his curve. He took that into Memphis’ rotation, and on a getaway day against the Iowa Cubs he was about to shave his ERA down to 2.17 and was looking for his third win in six starts. He had not lost. As the Cardinals looked for some bullpen help at the same time, his name came up.

On the 14th pitch of that start, Daniel was hurt.

Iowa catcher Victor Caratini laced a fastball down the middle directly whence it came. The liner caught Daniel on the temple, where he still has a scar and dent. The righthander fell to the ground. Several of his teammates began to pray.

Ponce de Leon was taken to a nearby hospital, and when he had some bleeding and swelling around and in the brain, surgery was necessary. He remembers being struck and leaving the field — and then mostly haze.

The Redbirds, who would win the Pacific Coast League title, had to finish the game. But instead of leaving for the drive back to Memphis they turned the team bus to the hospital. They waited there for an hour for an update, any update, before a call had to be made. The bus had to roll home.

“It was the hardest thing I had to do was pull that bus away from the hospital,” said Class AAA manager Stubby Clapp. “It was the hardest thing to have to leave a player behind like that in that situation. To be honest with you, the season was irrelevant in those moments. Tomorrow’s game was not important. Anything that happened after that pitch was not important. How delicate every second is.”

Jenn had been watching the game on her computer back home in New Smyrna, Fla. The Cardinals’ trainer provided her updates about Daniel’s condition, but before long she, Casen, and her parents were on a flight toward Iowa.

“I couldn’t get there fast enough,” she said as his second inning started Sunday.

The couple, who married earlier this month, met in college, at Embry-Riddle University, when she sat by him during marketing class. An outside hitter for the school’s volleyball team, Jenn (nee Beatty) was at her third school and Daniel his fourth. He was drafted by the Cardinals in 2014’s ninth round, and two years later he was in Class AA. Casen arrived Thanksgiving Day 2016, and he had just been to his first game to see his dad pitch shortly before the injury. Sunday was his second time at his dad’s game.

“He’s getting inside,” Ramon said, still filming. “I love it.”

Ramon, a longshoreman in California, raced to Iowa, too. Daniel would be there another three weeks before he was cleared to fly. During that time, the wives and girlfriends of the Cardinals raised money to ship Daniel’s car from Memphis to Florida. Caratini, the Cubs’ catcher, and his wife visited and brought home-cooked meals. Other I-Cubs’ wives and girlfriends did, too. Not once during that time did Daniel express any sentiment other than he would return.

He suggested Sunday that relief was never a sensation.

“I think that’s for everyone else,” he said. “For me it was fine. You did it. You got out there. Well, that wasn’t good enough. If I got out there and struck out everybody, that would be. That’s the goal.”

“Ponce,” as his teammates call him, is scheduled to throw again Wednesday, in relief. He’ll build on his pitch count and toward a likely return to Memphis as part of the rotation. If Sunday was a memorable appearance because it was his first since the injury, then Wednesday will carry a different numerical importance.

Instead of the first since, it will be his second toward the majors.

“I’m very proud of him coming back, and all the concerns of him being on the mound,” Ramon said.

“We can breathe now?” Jenn interrupted as her husband reached the dugout. “I’m relaxed. I knew he was ready to go out. I knew this day would come. I’ll still be nervous every time, but every pitcher’s wife is. That won’t change. We have some catching up to do this year.”

Watch the series of Post-Dispatch videos from Cardinals spring training

Watch here for a collection of our Spring Training videos each day.

Ortiz: After adjustment period, Adolis Garcia is hitting his stride

JUPITER, Fla. • Adolis Garcia never could have imagined how much he had to learn after he signed with the Cardinals a year ago. Although he pl…

Hall of Fame baseball writer Rick Hummel had a lot to say in Monday's live chat. Read his thoughts on the Cardinals.

Hall of Fame baseball writer Rick Hummel had a lot to say in today's live chat. Read his thoughts on the Cardinals.

Cardinals righthander Miles Mikolas hopes to improve after struggling in his first outing with the Cardinals.

With his wife Lauren, a Jupiter native like himself, Miles Mikolas gave The Post-Dispatch a tour of his favorite spots from his youth (and tod…

Mikolas has a rough debut for Cardinals

JUPITER, Fla. • Miles Mikolas, a Jupiter native signed for $15.5 million for two years after pitching three seasons in Japan, didn’t have the …