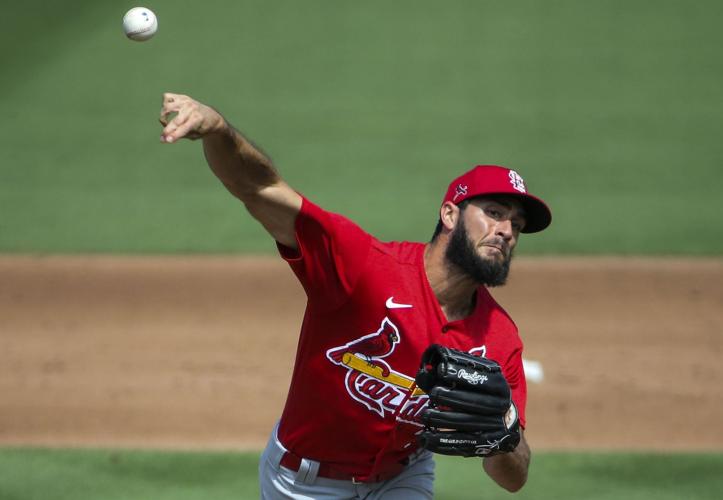 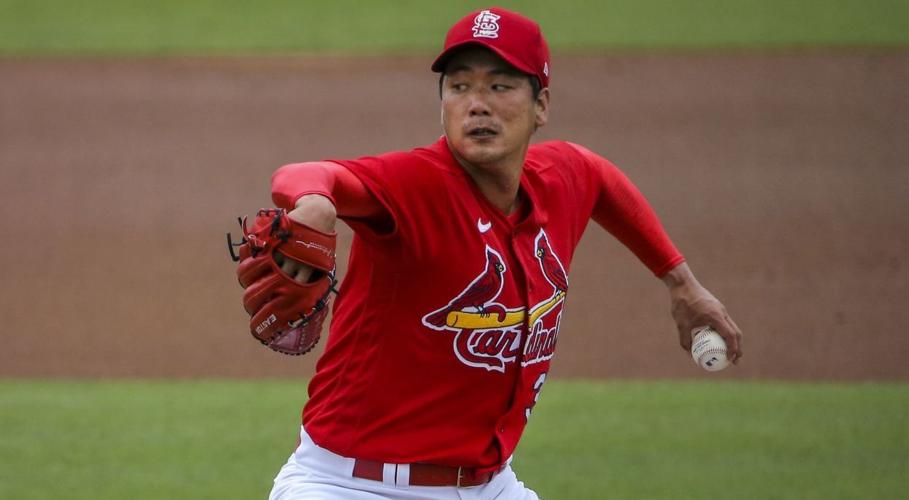 JUPITER, Fla. — Whether he was talking about his fastball or his rhythm the word Cardinals righthander Daniel Ponce de Leon returned to earlier this spring was “groove,” and he admitted when it came to his curveball he fiddled with three different grips searching for that.

He found it Saturday.

His timing couldn’t have been better — perhaps for the Cardinals.

Thrust into an unexpected start hours after the Cardinals had to delay the throwing program of a second starter this spring, Ponce de Leon punctuated 3 2/3 solid innings by landing a curveball on his 68th and final pitch for a called strike three.

Already auditioning starters such as Ponce de Leon for one opening in the rotation, the Cardinals possibly threw open another one Saturday. Kwang Hyun Kim experienced back tightness and had to stop his throwing program several days after Miles Mikolas’ shoulder sidelined him for the start of the season.

Already part of the casting call for the rotation, Ponce de Leon learned Friday he’d be featured for as many as four innings when he faced Miami for the third time this spring. He described the start as “a bit sloppy” but the finish was superb. The only run he allowed came after he left the game with two strikeouts and four hits allowed, and he took control of the game by being more assertive with his pitches, or, as he said, finding that “groove.”

“I’d say rhythm,” manager Mike Shildt said. “He found what he was looking to do. I was very encouraged. He was in the moment. A lot of quality pitches.”

A snappy game played out after Ponce de Leon’s departure as John Nogowski had four hits and four RBIs for the Cardinals in their 6-4 victory against the Marlins at Roger Dean Stadium. Nogowski, who has played well at first base this spring, hit ninth and brought depth to the day’s lineup. The Cardinals expected one thing they could count on all year was the depth of their pitching staff. With 2½ weeks remaining before opening day, that depth has been chiseled away.

Kim experienced stiffness in his back after the 28th pitch of his otherwise routine between-start bullpen session. The Cardinals had him set to start Saturday, plunge as far as four innings into the game, and continue preparing to be the team’s third starter when the regular season opens in Cincinnati. The schedule has some elasticity with an off day in Cincinnati, but there’s concern within the walls that the lefty might be delayed enough to not be available that first week in April.

“We don’t think it’s a huge setback,” Shildt said. “But nonetheless — a setback.”

Kim’s absence will lead to a shuffling of assignments in the coming days to get contenders starts and expanded innings. John Gant, the leader for the fifth spot so far in camp, will be joined by Ponce de Leon and likely Jake Woodford and Johan Oviedo as pitchers getting longer looks to build their arm strength, their pitch counts, and their candidacies for the openings. Lefty prospects Zack Thompson and Matthew Liberatore will continue to get the innings of a starter, but they’re not competing for a spot in the rotation, Shildt said.

The tandem lefties pitched consecutive innings Saturday and retired the first nine batters they faced. Liberatore was perfect through his two innings. Thompson ran into trouble with three walks in his second inning of work.

“We are working from a resource of depth,” Shildt said. “That is being tested early on.”

The Cardinals announced Saturday contracts for the 24 players on the 40-man roster with less than three years of service time. The club can assign the salary those players receive if unable to come to an agreement.

The Cardinals use a formula that considers service time and a publicly available statistic, Wins Above Replacement, to set the player’s salary. For Ponce de Leon, the gave it a twist. He served in spot duty as a starter last year, but because he was used in doubleheaders there were stretches in which he received service time one day at a time. A source confirmed that the Cardinals set Ponce de Leon’s salary for 2021 as if he had a full year of service time in 2020, even though officially he did not because of coming off the roster.

With Jack Flaherty and Adam Wainwright fixed in the rotation and Carlos Martinez named part of the rotation Saturday, the returning leader for starts is Ponce de Leon.

He made eight last season, one more than Kim.

Ponce de Leon’s grip on a starter’s role revolves around brevity. Able to elevate the fastball and plunge the curve, the righthander lapses into trouble when he throws to many balls or runs into deep counts with a lot of foul balls. Efficiency is essential. In his first inning Saturday, he felt behind two of the four batters, and he needed 24 pitches to get three outs. In the second, he again fell behind in the count to two of the first four batters he faced. On his first 40 pitches he had five outs and three baserunners. That’s when Andrew Knizner visited.

“Had a ton of foul balls again, which ran my pitch count up,” Ponce de Leon texted after his start to the Post-Dispatch. “The visit provided me rest, but usually when you get runners on you have to tighten your stuff up a bit to stop the bleeding. I think I did a good job of that.”

Twenty of his next 28 pitches were strikes.

Both of Ponce de Leone’s strikeouts came on three pitches, including the strikeout immediately after Knizner’s visit. He got two called strikes — one with a fastball, the other with the curve — and then ended the at-bat with a 93-mph fastball set up by the curve.

“I have some fond memories of that curveball this camp,” Shildt said. “He had a slider/cutter that is a quality pitch that came into play for him. Really big league quality for sure.”

Ponce de Leon pitched around baserunners in each of his innings and did it without consistently being grounded. He allowed only one groundball out in the start, but that turned into a double play that ended his third inning. He got those three outs on 13 pitches.

Nine of them were strikes.

That expediency continued into the fourth, and while a runner he permitted via single ultimately scored, he got ahead in the count to three of the four batters he faced. That included a foul ball and a swinging strikeout to the final batter of the inning, infield Isan Diaz. Ponce de Leon said he came to with a new grip on his curveball that started “slipping away” in an earlier game. So he went back to an old grip, one he trusted last year.

On Saturday, he threw the same one for all the curves — the ones that dropped 68 inches and the last one that plummeted 58, according to Statcast.

That was enough to catch Diaz looking to end Ponce de Leon’s outing.

That’s what has the Cardinals watching.

“It was still not great the whole time,” Ponce de Leon texted about the curve. “But I was able to knuckle down knowing that I just needed to land that last one.”

Media Views: Current Cardinals announcers were scolded, and glad they were, by Buck early on

Memories of legendary Cards broadcaster remain vivid, 20 years after his passing, to those who have the job now.

His hair trimmed because of the heat in St. Louis, Arenado homered for the second consecutive day, igniting an 11-run game and an encore for the lineup.

Ortiz, showered with gifts on his farewell tour, presents Pujols with No. 5 placard from Green Monster. Also: creative catching solutions and Flaherty on Flood.

Taking game out of Wainwright's hands, into McFarland's proves 'tricky' for Cardinals

Marmol's decision in the seventh, hinged around a matchup on the horizon, proves pivotal after Cardinals rally in 6-5 loss to Red Sox at Fenway.

Rookie hits two home runs, drives in career-high four to knot the top of the division standings with Cardinals' 6-2 victory at Milwaukee.

Rookies rush to rescue, adjusting on the fly vs. Brewers and reshaping Cardinals' season

Gorman hits two homers, drives in four, and Marmol says rookies' 'ability to not rely on their talent but develop it is going to be the key for our success.'

Right-hander made 19 starts, one shy of the major-league record to begin a career without a win, but has renewed confidence, new role in win vs. Brewers.

Hummel: Pujols isn't going anywhere, but Marmol needs to be more careful about when to use him