There is a certain rhythm to how Major League Baseball’s annual amateur draft usually unwinds through the course of three days, 40 rounds, and more than 1,000 names — revving from the pulse-quickening first picks to the roster-filling lightning rounds on Day 3. Cardinals assistant general manager Randy Flores likes to say the draft has “three different personalities.”

There is the “tremendous buildup for one or two high-stakes picks,” he said. On Day 2, teams shift into “their process” selections and veer toward strategically saving bonus money to spend later. On the draft’s final day, with the pace of picks accelerating, the panning for sleepers and lost gems creates a feel that is a faster “mixture,” Flores said, “that depends on what happened in days 1 and 2.”

It’s unlike any before it.

“What will that feeling be like at the end of round five, and will it match the exhaustion of a normal 40-round draft?” said Flores, the Cardinals’ head of the draft and former lefty reliever. “I’m as curious to see how this unfolds as much as anyone who follows the draft.”

Due to a scouting season cut short, a major-league season stuck on pause, and the shriveling revenue experienced throughout the game due to the coronavirus crisis, this coming week’s draft has been truncated to five rounds. That’s it. The Cardinals will have the 21st overall pick when the draft begins Wednesday evening, and the team will make its next six picks on Thursday, when the draft concludes. The Cardinals and San Francisco Giants have the most picks (seven) of any teams, and the Cardinals have five selections in the first 93 picks, putting an emphasis on this being a draft to replenish an organization.

It’s the most they’ve had in the top 100 since 2012, and this draft arrives three years after the hacking scandal left their system thinned with only one top-100 pick.

“Putting it simply, in my short experience here, having five picks in the top 100 is much more fun than having one pick in the top 100,” said Flores, who will be overseeing his fifth draft and plans to do so from his home office due to social distancing guidelines. “That’s clear, staff-wide.”

The amount of picks they have and the depth of college pitching available this year plays into the Cardinals’ sweet spot, and yet the unusual nature of this draft could work against the Cardinals because it completely eliminates an area the club likes to flex.

After 160 picks — 1,030 fewer players selected than recent years — the draft will be over and the Wild Wild West will begin. This year, teams will be allowed to sign an unlimited amount of eligible and undrafted free agents for a max bonus of $20,000. It’s a free-agent bonanza, and it radically changes the Cardinals’ ability to identify, draft, and develop mid- and late-round talents — the likes of which have nourished their roster for years.

Under these same rules, Albert Pujols (13th round) could have entertained offers from nearby Kansas City or sought a return to New York. Matt Holliday, a seventh-round pick years ago by Colorado, may have been a Cardinal sooner. For the Cardinals’ playoff opener against Atlanta this past October, the top three hitters were all drafted after the fifth round: Dexter Fowler (14th round, Colorado), Tommy Edman (sixth round, Cardinals), and Paul Goldschmidt (eight-round, Arizona). Impose these rules on the 2009 draft, and maybe Matt Carpenter (13th round, Cardinals) and Goldschmidt leap at offers to stay home, in Texas, and played against the Cardinals in the 2011 World Series. An area of the draft the Cardinals have strip-mined for talents like Carpenter, like Edman, like Trevor Rosenthal and Matt Adams, is now the frontier. Bring on the gold rush. Teams don’t have draft rights. Players have all the options.

And for some that includes returning to college for renewed eligibility.

“For generations and generations of players they are used to being drafted and then going and playing and there is a lot of uncertainty,” Flores said. “The absence of the structure of the draft is going to make that pool of players and their ultimate landing spots look different than before because factors that are out of the team’s control — location, childhood fandom, etc. — are going to be a part of the prospect’s calculus and they never were before.”

The Cardinals have outfitted scouts with talking points and other sales pitches for these undrafted players, and part of the message to them will be the club’s history of promoting from all corners of the draft and from the team’s practice of “promoting as rapidly as production demands.” It will be an unfamiliar ending to an abbreviated draft chocked with oddities.

As owners and the players’ union continue to circle each other in the ring of negotiations for a season — landing a few uppercuts, blocking a few counterpunches — the first real glimpse of teams experiencing acute financial distress will be this week. It is possible that some teams make their picks based on spending less, not acquiring more talent. That could upset the first round as teams trying to reduce cost wherever possible, take players they aren’t likely to sign or reach for players who are willing to take less than a pick’s prescribed bonus.

Signability looms as a larger question with fewer picks, too, and especially when it comes to high school players who can wait a few years for a traditional draft.

“One of the things people are talking about in this draft is since there are less rounds, signability is going to be of even more importance,” Flores said. “The opportunity to fix in that pond, that high school pond, might be limited without the flexibility afforded by a 10-round draft.”

The Cardinals enter the draft with a bonus purse of $7,901,100, and all indications are they’ll shape their strategy to fit around limit, not aim for less. Teams will be allowed to defer some of the bonus payments from this year’s draft to future years.

The 21st overall pick has an assigned slot of $3.1 million, and there will be a handful of college starters that fit the Cardinals’ profile available there. Tennessee lefty Garrett Crochet is considered a swift-moving player with an above-average fastball-slider combo, and the Cardinals have leaned left to break ties recently. Louisville righthander Bobby Miller has a 98-mph fastball and the look of a closer, while Georgia’s righthander Cole Wilcox comes with velocity, size, and the SEC pedigree the Cardinals value. So does Auburn starter Tanner Burns, with Duke’s righthander Bryce Jarvis and Miami’s righthander Chris McMahon also in the Cardinals’ mold and likely available around No. 21.

College starters expected to go early in the draft include Minnesota’s Max Meyer, Georgia’s Emerson Hancock, and Louisville lefty Reid Detmers. His father, Kris, was a Cardinals’ draft pick in 1993 and he was pitching for Class AAA Memphis when Reid was born in 1999.

Baseball America’s mock draft had 14 college pitchers going on the first day of the draft, though the BA pundits saw the Cardinals taking a shortstop. There’s a void in the position at the lower minors. BA saw the Cardinals picking Baylor shortstop Nick Loftin at 21st overall. Loftin hit .323 as a sophomore in 2019, and before joining Team USA this past summer had a nine-game look at the Cape Cod League. The Cardinals put an emphasis on performance in that summer wood bat league, and it was there that Mississippi State shortstop Jordan Westburg slugged two homers in his Cape Cod debut and hit .326 with a .901 OPS in 25 games.

The Cardinals have four picks in the draft before any team other than San Francisco. They would have had two picks on Day 1 but swapped the 37th overall pick with Tampa Bay in the January trade headlined by Jose Martinez leaving and Matthew Liberatore arriving. After 21, the Cardinals next pick at 54th, 63rd, and as compensation for free-agent Marcell Ozuna, 70th overall. It’s a cluster of picks that allows for some gamesmanship. The Cardinals could use it as a reason to shuffle around bonus money and reach for a pick, to gamble on signability — or play it safe, target predictable picks, and try to get sure things from an unsure draft.

“Any one pick in any one year you could cherry pick and come up with a Cardinals draft strategy,” Flores said. “When in reality, each pick is made in the context of that moment.”

This draft’s personality is shaped by the moment, for the moment.

During his opening comments at the televised draft, the commissioner also calls for MLB and its clubs to be 'active participants in social change.'

Louisville's Bobby Miller, with a 98-mph fastball and the look of a closer, could be among Cardinals draft picks later this week. (AP Photo) 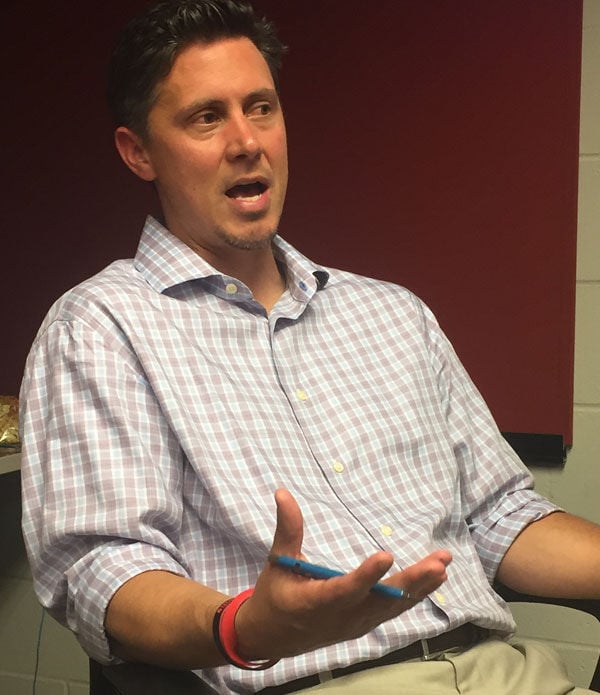