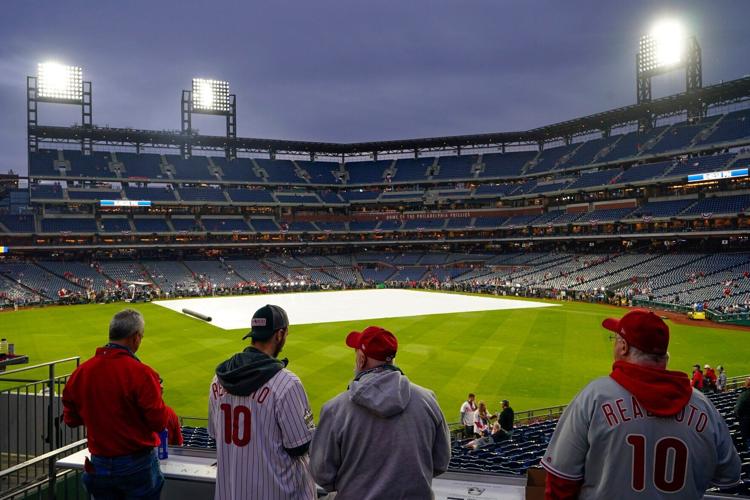 Fans arrive for Game 3 of World Series between the Astros and the Phillies on Monday in Philadelphia. However, the contest was postponed because of rain. 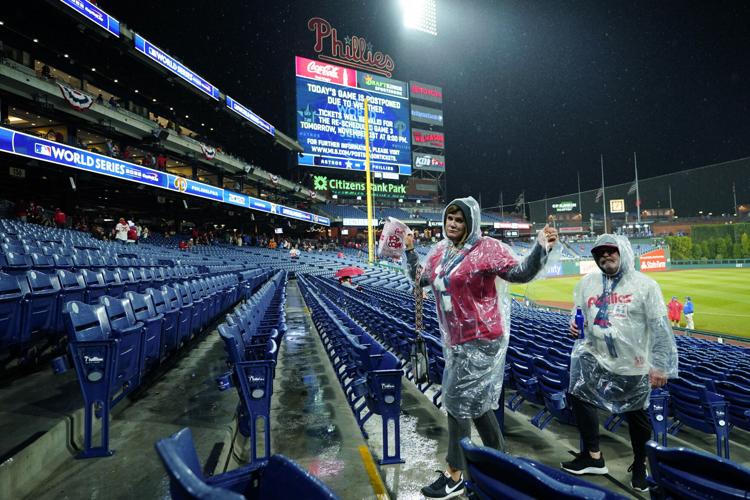 Fans leave Citizens Bank Park before Game 3 of baseball's World Series between the Houston Astros and the Philadelphia Phillies on Monday, Oct. 31, 2022, in Philadelphia. The game was postponed by rain Monday night with the matchup tied 1-1.

A forecast for intensifying rainstorms and the potential for sloppy play in the rain prompted MLB to postpone Game 3 of the World Series between Philadelphia and Houston and not, as they did in 2008 in Philadelphia, play into the inclement weather and see how far the game could slide. It’s the first time a World Series game has been postposed before starting since 2011 in St. Louis, when an extra day allowed the Cardinals to reset their pitching staff and have Chris Carpenter more rested for a Game 7 start he’d win against Texas.

In a best-of-seven series tied at a game each going into Tuesday night’s rescheduled Game 3, the pitching benefit will reveal itself swiftly.

But not as quick as a more pressing concern.

“Well, it affects both teams,” Astros manager Dusty Baker said. “I heard it’s hard getting reservations (Monday night). Everything’s full. So, you’re hoping that the guys can get reservations, get in and eat, and be with their families and be ready to play (Tuesday). It’s part of the game. You can’t control the weather. So you just deal with it.”

Major League Baseball, the teams and representatives from the players’ union met several times throughout Monday to determine whether they could start Game 3 before the rain arrived, and if so how much of the game could be played. Officials opted not to make a final decision until closer to the scheduled game time — after some Phillies had taken batting practice on the field, after the gates to the ballpark had been opened and fans streamed in. The first hint of rain arrived, and the game was postponed rather than play under the threat of worsening conditions.

Unlike the earlier rounds of the playoffs, the entire schedule will shift to accommodate the postponed game and not cost the teams a travel day back to Houston for a Game 6, if necessary. Game 7, if needed, is set for 7 p.m. Sunday at Minute Maid Park with its retractable roof, going head to head in primetime with the NFL.

With the rainout, the Phillies rewrote their pitching plans, shuttling Noah Syndergaard back to the bullpen for Game 3 in favor of Ranger Suarez. The lefty has allowed only six hits and two earned runs in 9⅔ innings this season, but use as a reliever in Game 1 of the World Series initially pushed back his start to Game 4. The extra day allows Suarez to start Game 3 and be available to start Game 7, if the series gets that far. Aaron Nola will start Game 4 on Wednesday.

Syndergaard will start Game 5, Phillies manager Rob Thomson said, unless the right-hander is needed in relief before then.

Zack Wheeler will remain as Philadelphia’s Game 6 starter, if needed.

Houston is sticking with Lance McCullers as its Game 3 starter.

When the Phillies last won the World Series, in 2008, they experienced a 91-minute rain delay in Game 3 and then things really got murky. In Game 5, Tampa Bay rallied to tie the game 2-2 in the sixth inning during a downpour. Playing through the rain became impossible and the forecasts were foreboding for days to come. Snow was expected. Then commissioner Bud Selig said he would not allow a World Series to end with a game called because of weather.

“We’ll stay here until we have to celebrate Thanksgiving,” he told reporters.

The game officially was suspended and two days later it resumed with Philadelphia winning the game and the championship on Pedro Feliz’s seventh-inning RBI. A few months later, owners officially adopted a new rule that assured a postseason game would be played to its completion at the same site, regardless if it was suspended after seven innings or seven outs.

In 2011, Major League Baseball stayed ahead of the start by preemptively postponing Game 6 of the World Series because of inclement weather in St. Louis, and by telling everyone they would see them tomorrow night they set the stage for David Freese, Carpenter, and the Cardinals’ 11th championship in chilly but competitive conditions.

Vierling, a state champ and once a Cardinals draft pick, began year as Philly's starting center fielder, but had to overcome demotion to Triple-A to be October contributor.

Bryce Harper's two-run homer in the first inning struck for a quick lead, but it was what he spotted that may have led to record five homers off Astros starter.

Phillies tied World Series record with five homers in 7-0 shellacking of Houston in Game 3. Philadelphia has 22 homers in the postseason, surpassing all other teams.

Fans arrive for Game 3 of World Series between the Astros and the Phillies on Monday in Philadelphia. However, the contest was postponed because of rain.

Fans leave Citizens Bank Park before Game 3 of baseball's World Series between the Houston Astros and the Philadelphia Phillies on Monday, Oct. 31, 2022, in Philadelphia. The game was postponed by rain Monday night with the matchup tied 1-1.