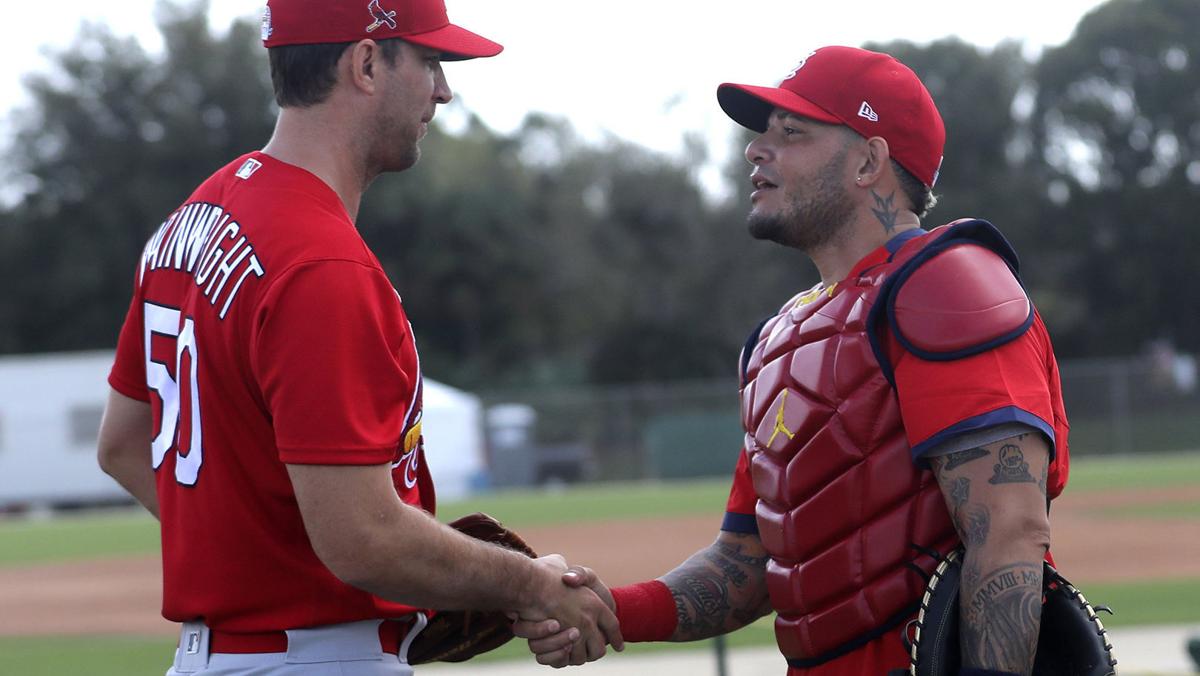 Adam Wainwright (50) and catcher Yadier Molina (4) meet after they completed a bullpen session in spring training in 2020. Photo by Laurie Skrivan

That first at-bat would come in the second inning, the cherished first hit would come three innings after that, and a runner would dare to try and steal in the eighth; he was unsuccessful. But a career about to reach a singular milestone truly began that summer night in Pittsburgh when Woody Williams uncoiled from his windup and delivered a pitch.

Awaiting it, in a crouch that will one day be bronzed, was Yadier Molina.

“It is so long ago, not only for a catcher — but 17 years since I threw him that first pitch and so long ago that I don’t even feel like baseball was part of my life anymore,” Williams said Tuesday from Texas. “And to see that he’s still doing it and still doing it at a high level. If I’m one of those pitchers on that staff, especially one who has struggled in recent years, I’m a bobblehead.

“My head is just going up and down on the mound,” Williams added. “He puts down a sign, and I’m throwing that pitch.”

What began June 3, 2004, at PNC Park with six shutout innings from Williams and a win for those runaway Redbirds will continue Wednesday afternoon at Busch Stadium with what’s scheduled to be Molina’s 2,000th game behind the plate. Only the sixth catcher in major-league history to receive 2,000 games, Molina will be the first to do so entirely with one team.

Molina received Tuesday night off after manager Mike Shildt canvassed his regulars and offered Molina either that night or Wednesday’s day game as a break. Andrew Knizner’s start at catcher Tuesday sets up Yadi2K with longtime teammate and “brother” Adam Wainwright delivering the pitches. Wainwright recently marveled at how Molina, 38, has revved into the season with 12 hits through the first 10 games and a .998 OPS.

“I mean — staying immortal like he always is?” Wainwright said. “Nothing he does surprises me. He’s a little heavier than he was last year, got a little more pop in the bat. You can tell he’s feeling good, moving well.”

It is possible to measure Molina’s career in statistics. He’s one of three active players with at least 2,000 hits, and earlier this season he passed Hall of Famer Johnny Bench for eighth all-time among catchers with his 382nd double. Molina will have caught 76.6% of the 2,609 games the Cardinals have played since his debut, not including his NL-record (for any position) 101 playoff games. He craves his 10th Gold Glove award and sets out to lead the league in innings behind the plate. Since 2004, Molina’s 25.4 defense Wins Above Replacement are second only to sublime shortstop Andrelton Simmons (25.8), according to Baseball-Reference.com. The next closest active catcher is Salvador Perez at 13.4 dWAR, and for context teammate Nolan Arenado, who debuted in 2013, has a 15.6 dWAR.

There have been eight Platinum Gloves awarded in the NL. Arenado has won the previous four; Molina won the first four.

Or, the longevity of Molina’s career can be measured in events. He debuted 16 years, 10 months, and seven days ago. A fan born that day can drive to his 2,000th game today. His debut was years before Netflix started to stream (2007), Twitter started a feed (2006), or his personal favorite Instagram filtered in (2010). The iPhone was an idea. Pluto was still a planet. The Astros batted pitchers in the NL not battered trashcans in the AL. During Molina’s time with the Cardinals, London won a bid to host the Olympic Games and hosted the Summer Games — almost nine years ago — and was about to host the Cardinals for two games before a pandemic limited travel.

“The way I put records like that into context and I do that like with Cal (Ripken Jr.) is you start to put that in the context of how many years that is of playing,” Shildt said. “In Cal’s case it’s every day. In Yadi’s case it’s most every day. I don’t know which one is more impressive because they’re both amazing feats. You put 2,000 games into the context of 162-game regular season, and you say, OK, if he caught every single game how many years would that be. And you go — whoa.”

“I think he could go out there and catch 150 games right now,” Williams said. “You knew early on there was something special with him. It starts with humility. You learn a lot about the makeup of a person. It’s just going about doing my job and for, good gracious, 20 years now or something silly he’s done his job. It’s incredible.”

Kim back, Ponce to bullpen

Kwang Hyun Kim, sidelined since spring because back soreness interrupted his throwing program, will rejoin the rotation Saturday, and start that afternoon against the Phillies. His return shifts Daniel Ponce de Leon to the bullpen as the long reliever for at least the short term. Ponce de Leon, who is out of options and must pass through waivers to go to the minors or taxi squad, was available as soon as Tuesday for an overtaxed bullpen.

John Gant will remain in the rotation for the foreseeable future, Shildt said. The righthander completed five innings and allowed three runs on six hits Monday.

To import a fresh arm and setting themselves up for the shift to a six-man rotation later this month, the Cardinals swapped righthander Johan Oviedo for reliever Kodi Whitley on Tuesday. Oviedo returned to the alternate site, where he will have to remain at least 10 days unless called upon to replace an injured pitcher.

Molina will catch Wainwright as part of his 2,000th game at catcher. Also: Washington gives its lineup a La Russa-like twist.

By many measures Tommy Edman has been as-advertised at leadoff hitter.

Whitley optioned to make room on roster for lefty's return to rotation.

Adam Wainwright (50) and catcher Yadier Molina (4) meet after they completed a bullpen session in spring training in 2020. Photo by Laurie Skrivan