Editor's note: On Oct. 9, 1969, Cardinal nation was stunned by the firing of broadcaster Harry Caray. Anheuser-Busch said the decision was marketing-based, although rumors swirled that Caray was having an affair with Susan Busch, wife of August Busch III. Busch would later deny the rumors, but in "Under the Influence," a book published in 1991, Caray said: “You couldn’t say I did and I wouldn’t say I didn’t.”

Here was our original coverage of the announcement.

His employer since 1954, Anheuser-Busch, Inc., dismissed him yesterday. Caray said he was told at 3:25 p.m. by Anheuser-Busch advertising director Donald Hamel that his contract would not be renewed for 1970 and that he would be replaced by Jack Buck as head of the Cardinal broadcasting team.

Caray said he expected to talk to representatives of other major league teams, when he attends the World Series next week, about joining another broadcasting operation. He said, "I love the Cardinals but I love baseball too much not to broadcast it."

A statement issued by company president August A. Busch Jr. said the decision was based on a recommendation from the company's marketing division. Busch said, "We have been very glad to have had Harry Caray as a member of our broadcasting team since 1954, and we can assure our fans that we will do everything possible to make the Cardinal broadcasts of the future both interesting and enjoyable."

In an interview after the announcement, Caray said, "I'm bruised. I'm hurt, and I feel badly about it."

He disputed the marketing reason given for his dismissal, saying that Busch beer sales had risen from 200,000 cases to 3,000,000 barrels annually since he began advertising it.

Caray said, "I want to know why I was fired, I've heard a lot of rumors involving personal things."

Referring to Busch, Caray said, "I think the world of Mr. Busch. I'd cut off my arms for him. But you'd think that after 25 years, they would at least call me in and talk to me face to face about this."

The brewery said the decision was made "in conjunction with the entire advertising, promotional, and merchandising plans for next year. This has been the practice for many, many years and has not been deviated from this year."

On Nov. 3, 1968, he suffered serious injuries, breaking several bones, when he was hit by a car while trying to cross Kingshighway. Police iss…

George W. Couch Jr. of Anheuser-Busch's advertising department would say only, "We felt Caray would not fit into our 1970 program. I think the announcement speaks for itself."

Robert Hyland, general manager of KMOX radio, the principal station on the Cardinal radio network, said that Buck would continue to be sports director for KMOX.

Who will assist Buck in broadcasting the games has not been determined, Hyland said.

Cardinal broadcasts are carried over a network of more than 100 stations in 14 states. Rumors that Caray would be dismissed had been circulating in the last half of the baseball season. Caray said a report in August that he would be replaced by Pittsburgh Pirates broadcaster Bob Prince might have been a trial balloon.

Monday, Caray was given about six hours' notice that he had been dropped as announcer of a 10-minute evening sports show on KMOX.

Hyland said that he called Caray at Shea Stadium in New York about noon when he received word of the cancellation from the brewery's advertising agency.

Hyland said he expected Caray to continue  his broadcasts of the University of Missouri football games trough the fall season.

A group calling itself the Harry Caray Fan Club has called a protest rally at 10 a.m tomorrow at the Musial statue at Busch Stadium. Jerome Collins and Robert Brown, spokesmen, expressed hope that baseball fans who enjoy the Caray broadcasts turn out in an effort to have Caray rehired. Petitions will be circulated. Meanwhile, a movement to gather petitions asking Anheuser-Busch to reverse its decision began in Jefferson City.

The petitions began as a joke Thursday, but John Harm, executive director for the Missouri Oil Jobbers, has started circulating them seriously. The petition says in part "Out here in the boondocks, Harry Caray IS the Cardinals to many of us. He makes the names in the line-up dance with reality, and the quivering faith or haunting doubt that goes into the outcome of every game, every play, gives new reality and lasting emotion to all of us who love the Cardinals."

Caray, born Harry Carabina in St. Louis 52 years ago, attended Webster Groves High School. He was originally hired by Ed Griesedieck, president of a brewery that decided to sponsor Cardinal and Brown broadcasts in 1944.

He was selected by the Sporting News as the outstanding play-by-play announcer of the National League for 1946, 1948. 1949 and 1951. Caray brought great enthusiasm to his reporting and acquired a large and loyal following.

He had critics, however, who believed that his enthusiasm for the Cardinals detracted from the objectivity of his description.

He was the subject of a long feature story in Sports Illustrated magazine a year ago, in which writer Myron Cope said that "Cardinal fans either love Caray or hate him, there being no middle ground."

His cry, "Ho-lee cow," and his preparation of listeners for home runs "It might be, it could be, it is! " became famous.

Caray was injured seriously when struck by an automobile Nov. 4, 1968, near the Chase-Park Plaza Hotel. He recovered in time to resume his broadcasts when the season opened last spring.

Buck said he had been offered the job yesterday and that details of his contract remained to be forked out. He said that he and Caray were on good terms.

"We always were and still are," he said, "I always wanted to be No. 1 but not at the expense of Harry or anyone else."

Caray, when interviewed last night in a suburban St. Louis restaurant, noted that about all could do in protest was to scrap Busch products and pick up another beer, which he did - a Schlitz.

He said that he considered the separation from the brewery final.

Looking back: The day Harry Caray was nearly killed while trying to cross Kingshighway 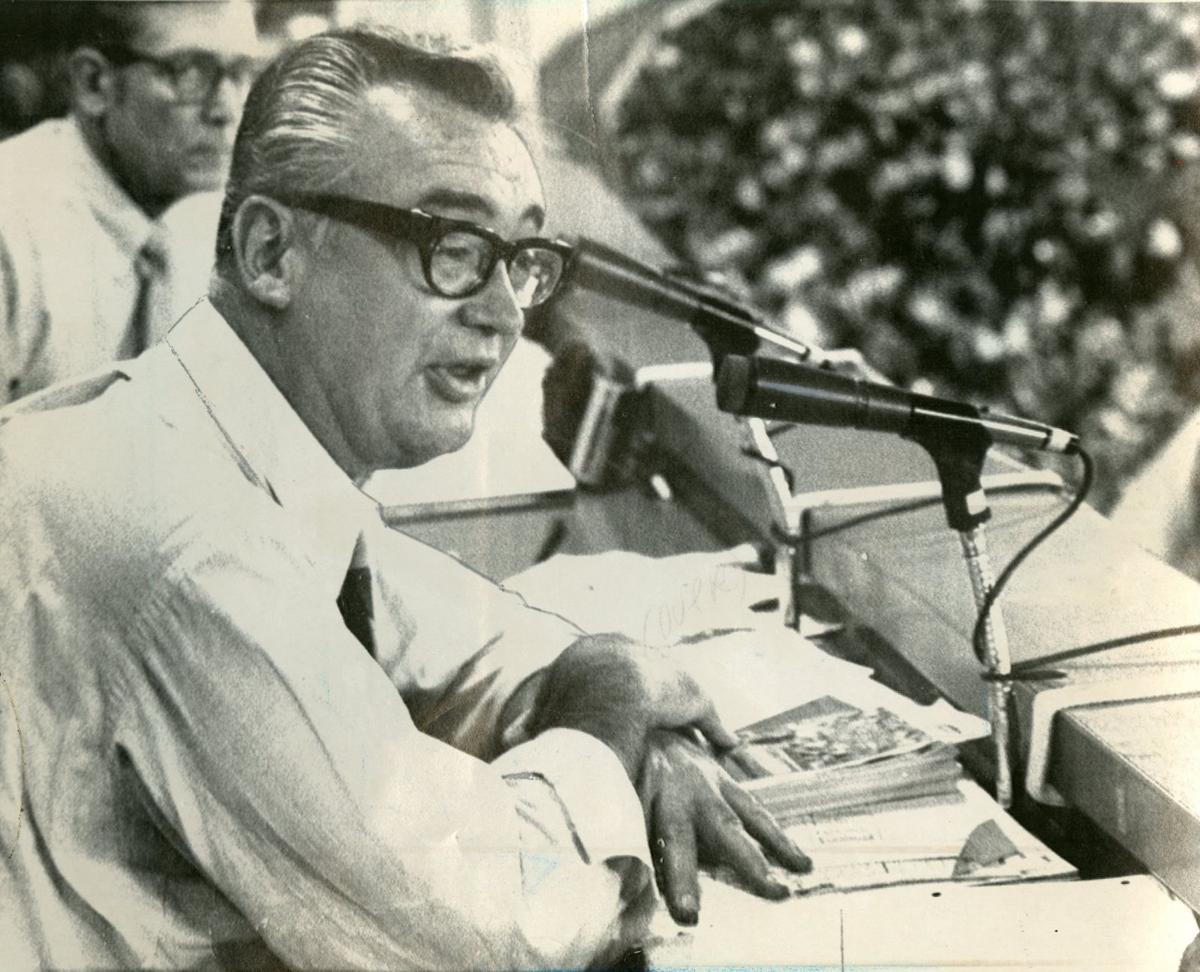 Harry Caray at work behind a microphone at his last game as a Cardinals broadcaster on Oct. 9, 1969. Associated Press file

Announcers and old friends Harry Caray and Jack Buck clown around in the KMOX booth at Busch Stadium before a 1982 game between the Cardinals and Cubs. (Post-Dispatch photo by J.B. Forbes)