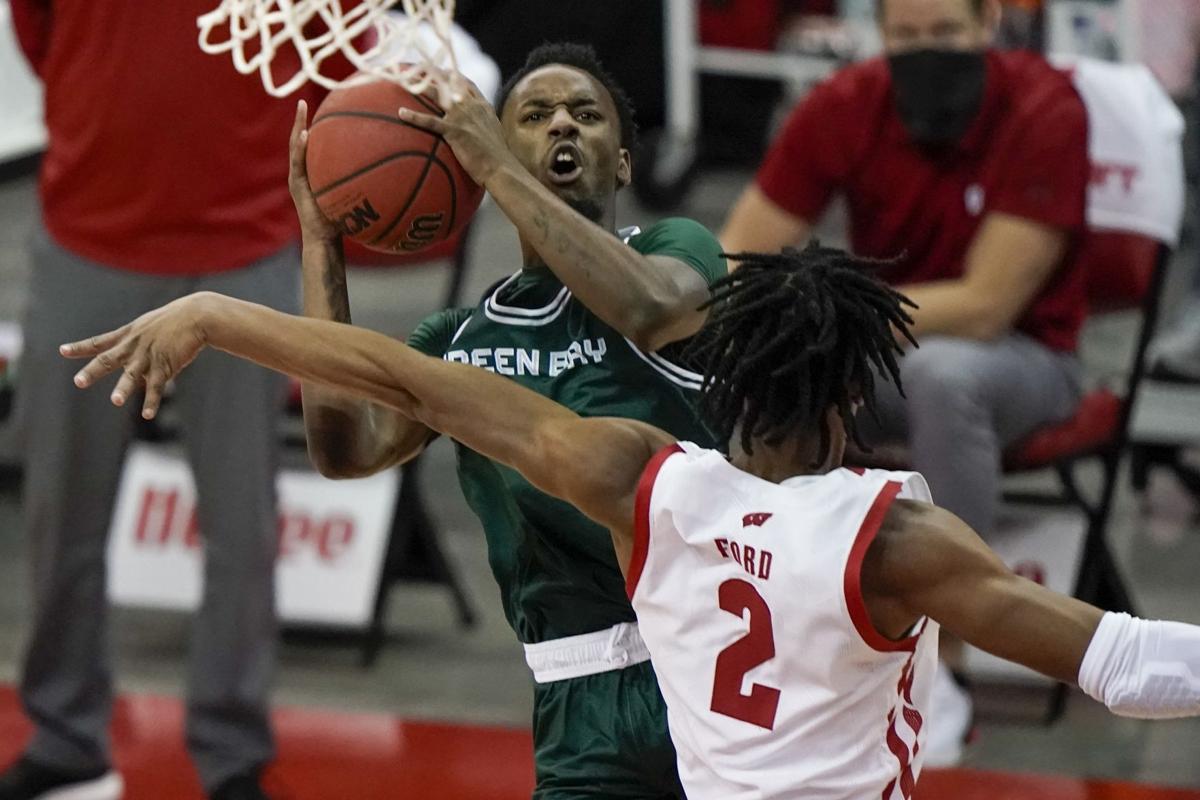 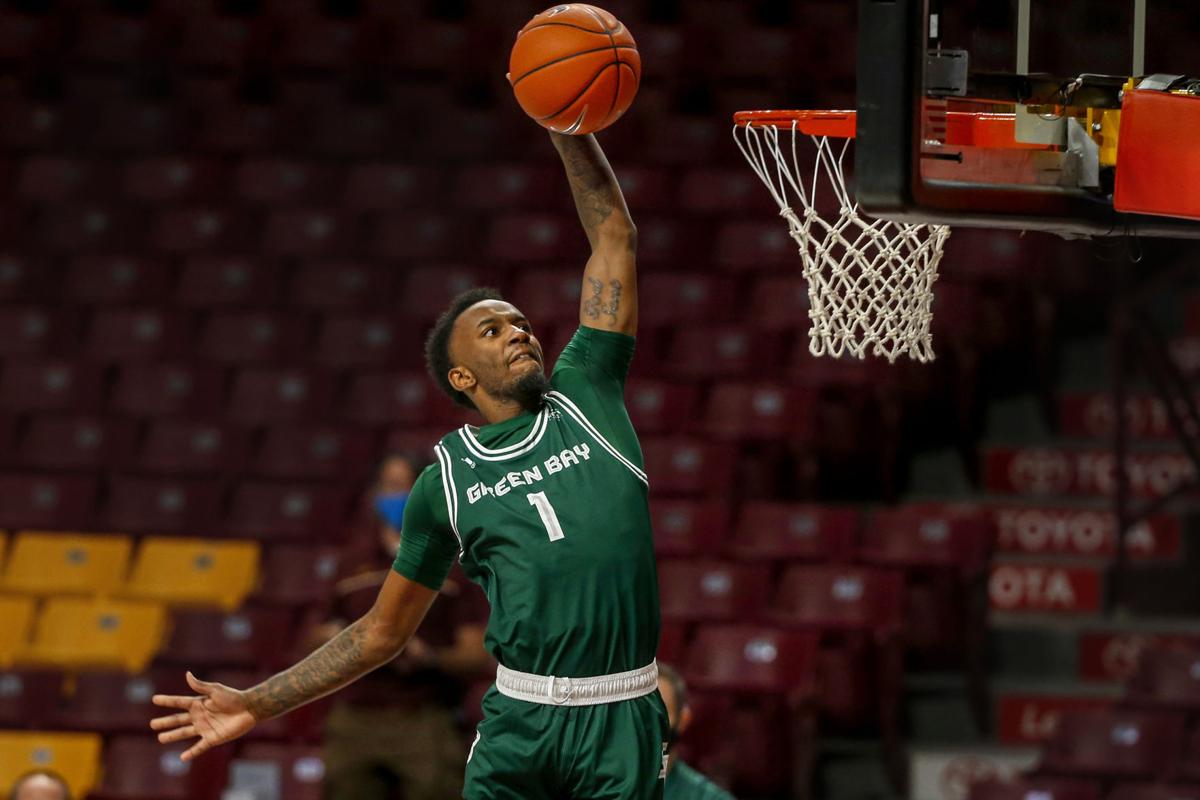 Green Bay guard Amari Davis (1) dunks on a breakaway against Minnesota in the first half of an NCAA college basketball game, Wednesday, Nov. 25, 2020, in Minneapolis. Minnesota won 99-69. (AP Photo/Bruce Kluckhohn)

Amari is a sophomore guard who played the last two seasons at the University of Green Bay. He’s one of more than 1,200 college players who entered the NCAA transfer portal this year. He’s found a new team at Missouri and will soon settle into a new role on a bigger stage in the Southeastern Conference.

But the purpose stays the same.

Amari plays for Lamar, the big brother, known as “Boo,” who never got a chance to fulfill his promise on the court. In October 2007, Lamar Davis, then a 14-year-old high school freshman, collapsed during a basketball workout in Huber Heights, Ohio, near Dayton. He was rushed to a local children’s hospital where he was pronounced dead. Lamar, with the build of a Division I player, had yet to play a varsity game at Trotwood-Madison High but was already receiving college recruiting letters. An autopsy later revealed that he suffered complications caused by an enlarged heart.

Amari, just 6 at the time, lost his big brother. He lost his idol.

At the time, Amari served as the varsity team’s ball boy then stayed connected to the program until it was his time on the court. He became a four-year starter and guided Trotwood-Madison to its first state title as a senior, the 2019 Ohio Division II championship.

His inspiration has never changed.

“He’s one of the main reasons why I wanted to play basketball,” Davis said in a recent phone interview. “Growing up I used to watch him at his practices. Then, when he died, I told myself I’d follow in his footsteps. From every game on I played for him. It’s what he would want me to do. He gives me a boost for every game and every practice.”

Lamar would be 28 now. His legacy lives on back in Ohio. Current players at Trotwood-Madison know all about Amari Davis, but longtime coach Rocky Rockhold makes sure they know about Lamar, too.

“When we break down at the end of practice, we say his brother’s name,” Rockhold said. “That tradition still continues. It still carries.”

Next, Davis will carry those memories and motivation to Mizzou. Despite averaging 30.1 points per game during his all-state senior year, the 6-foot-3 guard didn’t generate much interest among college programs around Ohio, much less high-major conference teams in the region. He was prepared to commit to a mid-major in-state school — Rockhold declined to name the team — but the program pulled the scholarship offer in favor of another player, who only lasted a year on the team.

“I don’t say this in a negative way, but coaches have a check box,” Rockhold said. “Is he big? Can he run fast? Does he jump out of the gym? Is he a knock-down shooter from 3-(point range)? Well, he doesn’t check any of those boxes. But sometimes we forget the intangibles and the fact that he can just score. He just has an ability to score the ball.”

“We also forget he can defend, therefore, he can create other shots for us,” he added. “His anticipation defensively is off the charts. You don’t teach that. Kids either have that or they don’t.”

Davis found a match at Green Bay, a Horizon League program coached by former Purdue player and student assistant Linc Darner. As a freshman, Davis was far from a polished scorer — he missed the only eight 3-pointers he attempted — but he averaged 15.9 points per game, earned Horizon League freshman of the year honors and set the team’s freshman scoring record, breaking the 30-year-old mark set by current Virginia coach Tony Bennett. He led the Horizon and ranked 11th nationally in 2-point baskets. Davis’ game defied modern analytics, eschewing 3-pointers for mid-range jump shots. As a freshman, 59.5% of his field goal attempts came on 2-point jumpers, per HoopMath.com.

“He’s got a really good pull-up game,” said Darner, who was fired after Davis’ freshman season. “He’s really good off the dribble. He’s really good in the open floor. But the thing that I liked about him is the ball just went in the hoop a lot.”

“His ability to create scoring opportunities and finish at the rim will help us from the jump,” said Mizzou’s Cuonzo Martin, who happened to be Darner’s college teammate at Purdue.

As a sophomore, Davis averaged 17.2 points per game while expanding his range. He shot 28% on 3.3 3-point attempts per game. That’s hardly sharpshooter standards, but it’s part of his game his former coaches believe will develop at Mizzou, where he’ll be one of at least eight newcomers on next season’s team as Martin continues to shop the transfer market to rebuild his roster.

“It just comes down to having time in the gym, getting comfortable and really knowing if that’s going to be his role or not,” Rockhold said. “Do you want him to be a knock-down shooter from 3? Or do you just want him to be good enough so he can stretch the defense and then get to the rim? Once Coach Martin defines that for him and says, ‘This is who I need you to be,’ he’ll do it.”

Rockhold believes this because he watched Davis’ dedicated approach for four years. By his count, Davis never missed a single offseason workout or practice at Trotwood-Madison. The game became an obsession, perhaps an endless chase to make good on the promise he made to himself years ago.

Lamar never got the chance to thrive in the sport. Little brother won’t let those moments pass.

“We all have reasons for why we do the right things at the right times,” Rockhold said. “I think (Lamar) is part of the reason for Amari. He just feels like his brother is watching.”

Green Bay guard Amari Davis (1) dunks on a breakaway against Minnesota in the first half of an NCAA college basketball game, Wednesday, Nov. 25, 2020, in Minneapolis. Minnesota won 99-69. (AP Photo/Bruce Kluckhohn)