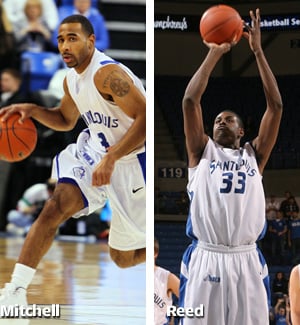 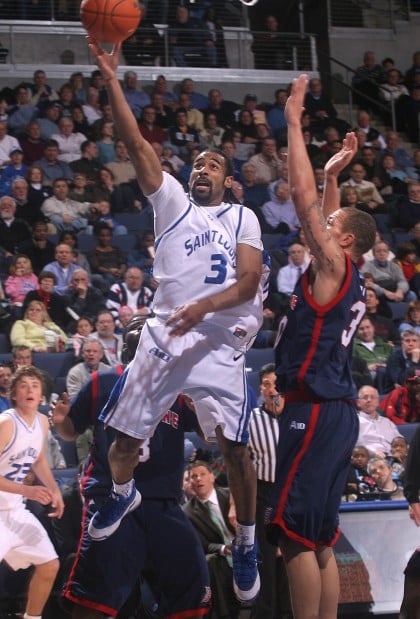 February 4, 2009 -- SLU guard Kwamain Mitchell (left) goes up for a shot against Duquesne guard/forward Bill Clark in second half action during a game between St. Louis University and Duquesne at the Chaifetz Arena in St. Louis, Mo. Chris Lee | Post-Dispatch 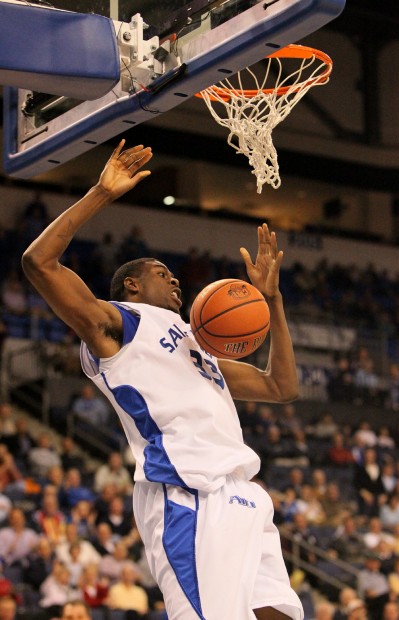 SLU's Willie Reed follows through on a dunk against Princeton in a game last March at Chaifetz Arena. (Dawn Majors / dmajors@post-dispatch.com)
BY ELIZABETHE HOLLAND and BRYAN BURWELL

Two of St. Louis University's top basketball players are no longer on the team or enrolled at the university — at least until January — amid allegations they sexually assaulted a female student.

The university released a statement Wednesday afternoon saying Kwamain Mitchell, the team's leading scorer, and Willie Reed Jr., a key starter, were no longer enrolled. The university would not comment further, saying it was legally obligated to protect the students' privacy.

Sources said the university's student conduct committee held a hearing last month involving allegations of a sexual assault May 1 and recommended a harsher punishment — a one-year suspension for each player. But in response to an appeal, the university administration set aside that recommendation and told the players they could return in January if they met certain conditions, sources said.

Mitchell hopes to return in January, said his attorney, John Rogers. But Reed insists he did nothing wrong and does not plan to return to SLU, said his father, Willie Reed Sr.

The departures come as SLU's basketball team was looking forward to its best season in years.

"The administration and the appellate process found that there was no evidence to substantiate that Kwamain should be disciplined for any type of sexual assault," Rogers said. "I anticipate that Kwamain will do everything in his power to satisfy the administration that he is a student worthy of reconsideration when he attempts to re-enroll ... after the first of the year."

Reed's father said his son intends to ask SLU for a release from his athletic scholarship so he can enroll and play elsewhere.

"I'm not happy with the process — the way everything happened, the accusations that were brought up against him," Willie Reed Sr. said. "He said he didn't do anything. ... What (SLU is) saying is, 'Hey, we're suspending both of them for a semester and they can reapply back to the school.'"

Willie Reed Sr. said the players were told they would have to give a written apology "to the young lady, to the school, to the coaches, to the teammates. And I said my son is not doing that (because) he didn't do anything."

Rogers said he would not discuss whether Mitchell was asked to write such a letter, or any other specific requests the university has made in considering whether to re-enroll him.

St. Louis police questioned three SLU basketball players in early May after a 20-year-old SLU student said she had been sexually assaulted in the campus's Grand Forest Apartments on Laclede Avenue by two people she knew. (The third player has since left SLU.)

Police investigators presented the case to prosecutors, but the St. Louis circuit attorney's office decided against filing charges. In a statement in May, Circuit Attorney Jennifer Joyce said her office had found "insufficient evidence for us to bring charges against the suspects at this time." The statement said her office would continue to seek additional information, "and if circumstances change, we will re-evaluate the matter."

Ed Postawko, the chief warrants officer for the circuit attorney's office, said Tuesday that while no charges have been filed, the office's sex crimes unit was still reviewing the case and that it has been classified as "taken under advisement."

"Because of the serious nature of charges like this, we like to be thorough and not rush anything," Postawko said.

David Korum, an attorney for the woman who reported the assault, said in May that the student and her family were disappointed that no charges had been filed. He said that the woman would continue to provide information to police and push for action by the university against her alleged attackers.

SLU's policy on sexual assault says that "even if criminal justice authorities choose not to prosecute, the university can pursue disciplinary action." Such action could result in dismissal or suspension.

The policy defines sexual assault as 'sexual contact without consent." The policy includes acts "committed either by force, intimidation or through use of the victim's mental incapacity or physical helplessness, including intoxication."

Sources who know the female student said she did not return to SLU this semester.

"It doesn't seem like a very harsh sentence," she said. "It makes it seem like someone at SLU who has a lot of stock just wants some of the star players to play."

Mitchell and Reed have been Billiken standouts. Mitchell, a junior who has started at point guard since his freshman season, was a second-team all-Atlantic 10 selection last season, and Reed, also a junior, received honorable mention.

This had the makings of a breakout season for SLU as coach Rick Majerus' rebuilding program moved into its next phase. After two seasons of being one of the youngest teams in the nation, the anchors of SLU's team were juniors.

Majerus declined to comment Wednesday. "I've been instructed by the university not to speak on the matter, and so I won't," he said.

A Post-Dispatch reporter saw Mitchell playing basketball with SLU team members Wednesday at the Chaifetz Arena, but Mitchell left without talking to the reporter.

Tom Timmermann of the Post-Dispatch contributed to this report.

Top players Kwamain Mitchell and Willie Reed are no longer on the team — at least until January — amid allegations they sexually assaulted a female student.

Reed's father says SLU came up with "compromise that didn't satisfy anyone."

Former St. Louis University center Willie Reed is heading home and is looking to continue his basketball career at Kansas State, according to …

February 4, 2009 -- SLU guard Kwamain Mitchell (left) goes up for a shot against Duquesne guard/forward Bill Clark in second half action during a game between St. Louis University and Duquesne at the Chaifetz Arena in St. Louis, Mo. Chris Lee | Post-Dispatch