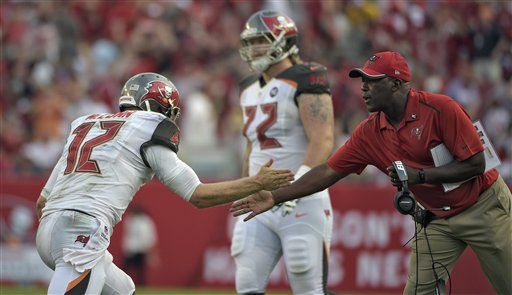 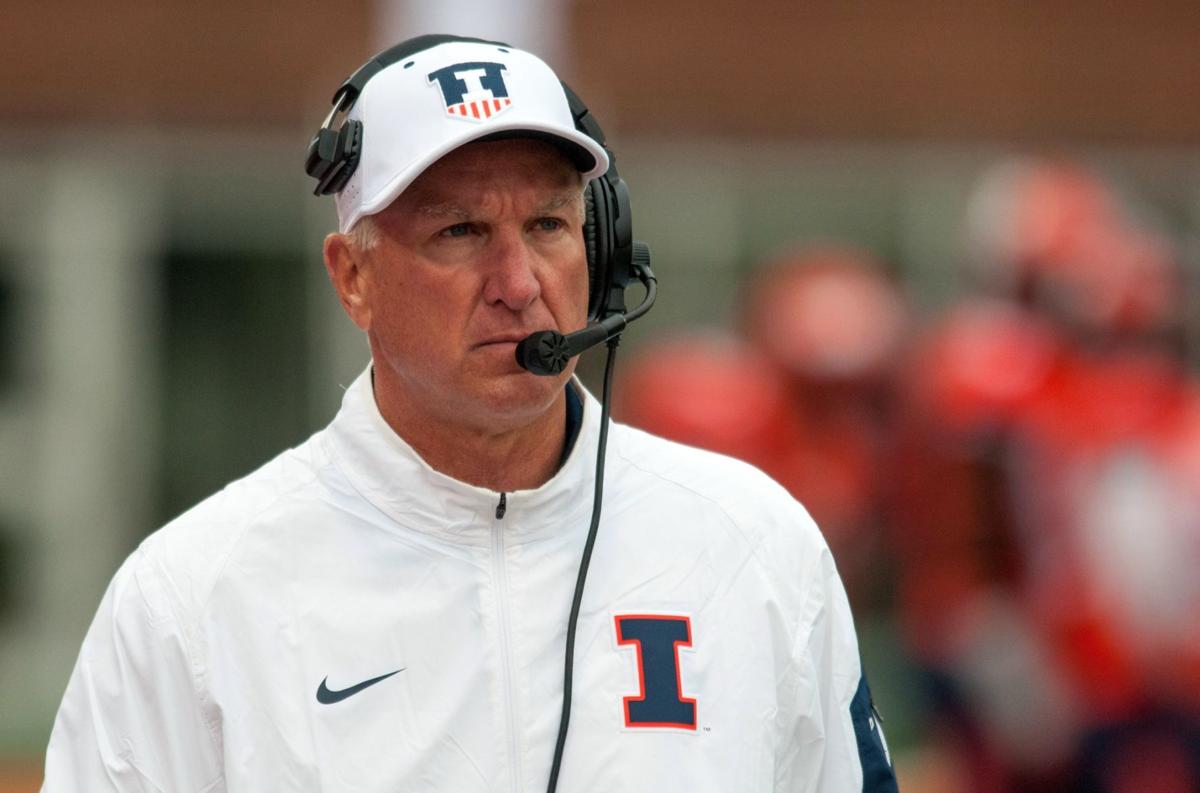 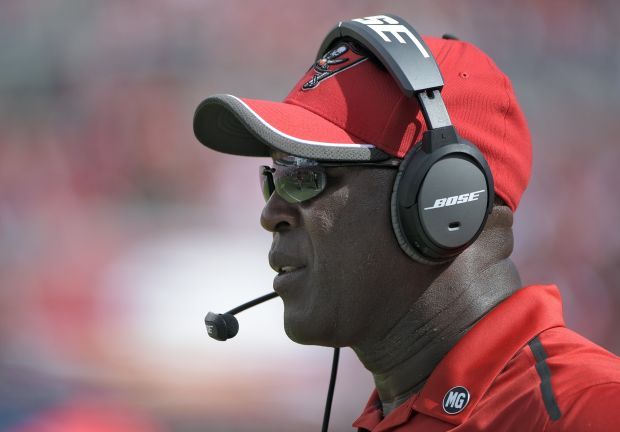 FILE - In this Sept. 7, 2014, file photo, Tampa Bay Buccaneers head coach Lovie Smith looks on from the sidelines during the first half of an NFL game against the Carolina Panthers in Tampa, Fla. The Buccaneers did little right during a season-opening loss to Carolina, yet still had a chance to beat the Panthers. That gives coach Smith and his players something to build on going forward. (AP Photo/Phelan M. Ebenhack, File)

CHAMPAIGN, Ill. • Lovie Smith, an NFL head coach for 11 seasons and former Rams defensive coordinator, soon will be introduced as the new head football coach at the University of Illinois according to multiple sources. Ryan Baker of WBBM television in Chicago was the first to report the news, and an announcement is expected as early as Monday.

Illini athletics director Josh Whitman wasted little time in his first day on the job. On Saturday morning he announced he was retaining John Groce as men’s basketball coach, then dropped a bombshell by dismissing Bill Cubit as the football coach.

Whitman delivered the news in person to Cubit on Saturday morning during a 20-minute meeting. He also told Cubit that his son, offensive coordinator Ryan Cubit, was being let go.

Whitman met with the current Illini players at 2 p.m. and spoke at a news conference at 3 p.m. in which Whitman threw out no names but said “we have a plan” for finding the next coach. Smith’s name was ricocheting through social media and internet sources.

Smith, 57, was head coach with the Chicago Bears for nine seasons, starting in 2004, and had an 81-63 record that included three NFL North championships and an appearance in the Super Bowl for the 2006 season. He then coached the Tampa Bay Buccaneers in 2014 and 2015 before being fired after compiling a record of 8-24.

He was the defensive coordinator for the Rams when they went to for the Super Bowl for the 2001 season.

Smith last coached in college in 1995, when he was a defensive assistant at Ohio State.

Smith is a native of Texas and his former scouting director, Greg Gabriel, Tweeted that he sees Smith as a college head coach who will be able to attract elite talent.

“Having spent 8 years with Lovie, don’t underestimate his ability to recruit,” Gabriel said. “He will be able to compete for the top kids.”

Smith is likely to bring his two sons to the coaching staff. Mikal Smith was coaching safeties for his father at Tampa Bay. Miles Smith was an offensive intern. A third son, Matthew Smith, is Lovie Smith’s agent.

Whitman said the coaching change means the start of spring practice will be delayed, probably two weeks. And the spring game, which had been scheduled for April 16, will be moved to a later date.

Whitman said Cubit’s unusual two-year contract made it difficult to project long-term success. And he didn’t feel strongly enough to consider an extension. Thus the reason to dismiss Cubit and start now on a long-range option.

“It’s something I’ve been thinking about for a long time, long before I knew I’d be selected to this position,” Whitman said. “I didn’t know until recently this was the answer but I knew it was a possible answer.”

Whitman said he involved others in the administration with this plan within the last week.

Cubit was named interim head coach on Aug. 28, 2015 when former athletics director Mike Thomas fired Tim Beckman during an investigation relating to injury reporting and student-athlete medical treatment. Cubit led Illinois to a 5-7 record in 2015, including 2-6 in the Big Ten. Cubit had the interim tag removed form his title on Nov. 29 when he was given a two-year contract.

The university said Cubit will receive the remaining balance of payment due for the upcoming season, approximately $985,000. He will be paid approximately $361,000 for the remainder of his contract.

There was no word on the details of Smith’s contract. Whitman said he has been working with the president, chancellor and board of trustees to let them know they’ll be exploring new financial ground.

“There are always financial restraints and every decision we make has financial implications,” Whitman said. “That said, I’m very grateful to our chancellor, board and president. We’re all prepared to support this new coach in a way we have not in the past.”

Ayo Dosunmu, Kofi Cockburn and Giorgi Bezhanishvili have all declared for the NBA draft, Adam Miller has entered the transfer portal.

FILE - In this Sept. 7, 2014, file photo, Tampa Bay Buccaneers head coach Lovie Smith looks on from the sidelines during the first half of an NFL game against the Carolina Panthers in Tampa, Fla. The Buccaneers did little right during a season-opening loss to Carolina, yet still had a chance to beat the Panthers. That gives coach Smith and his players something to build on going forward. (AP Photo/Phelan M. Ebenhack, File)