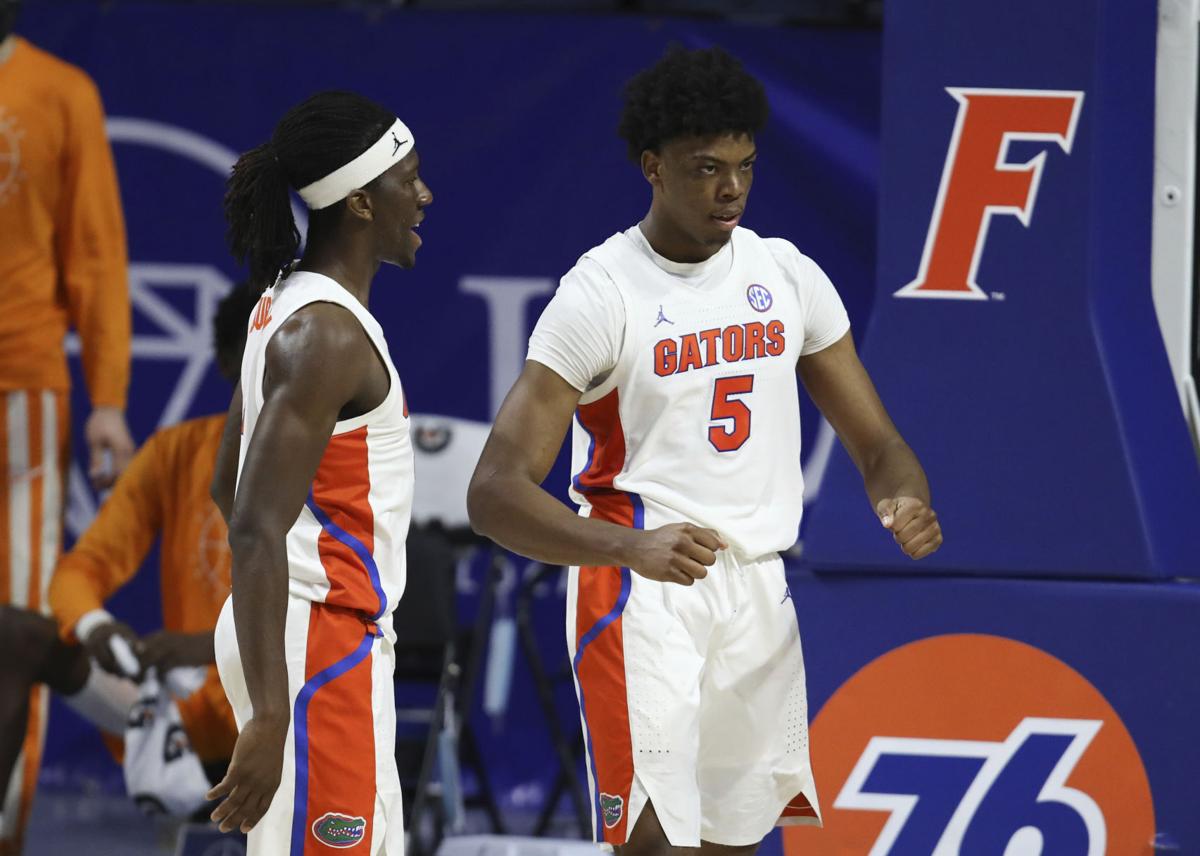 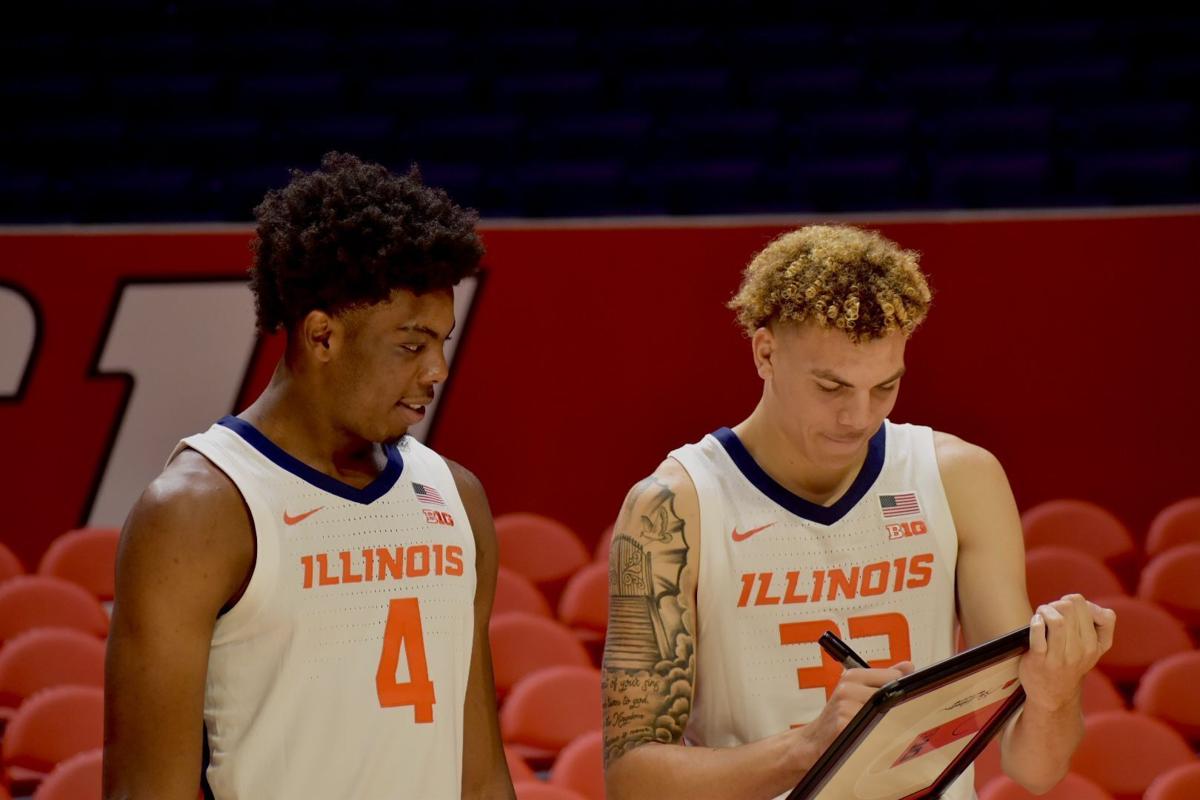 CHAMPAIGN — Omar Payne sat down in the Orange Krush fan section at State Farm Center just a few feet away from Lou Henson court. The 6-foot-10 forward, who transferred from Florida to Illinois, then bent over and pulled the tongues down on his Nike basketball shoes.

It was the Illini's media day Oct. 1, and Payne was being bombarded with questions about how he'd fit in with his new team, especially considering that when he committed to Illinois, star center Kofi Cockburn wasn't in the picture. The consensus Second Team All-American had declared for the 2021 NBA Draft, but after testing the pro waters, he decided to come back for a third season in Champaign.

Cockburn's return instantly pushes the Illini into the upper echelon of the Big Ten and the country, but it also changes Payne's role significantly. The transfer big man is no longer in line to be the team's starting center, and he's perfectly fine with that.

Payne's shoes — or rather the 'Every Day Guys' slogan written on the tongues — embody that.

"I feel like with me, my personality type, I can jell with anybody because I'm not a problematic dude," Payne said. "So just coming in, I feel like if I go hard and push the team, they'll push me and it'll be a great fit."

The lopsided win gives Payne a little bit of bragging rights, but a lot has changed since then, particularly with Cockburn. The 7-footer has become one of the most dominant players in the nation, averaging 17.7 points, 9.5 rebounds and 1.3 blocks last season.

Cockburn believes he and his team can be even better with Payne, who uses his freakish athleticism to play above the rim on both ends of the court. Last season, Payne averaged 1.2 blocks in just under 16 minutes per game.

"He definitely does (give me some trouble in practice)," Cockburn said. "Omar, he's a strong physical player. He loves physicality, and he has a motor like no other. He never takes a play off. He makes things so weird now being around him and his long arms. You can't really slack off. You gotta make sure that everything is strong and powerful."

Illinois coach Brad Underwood called Payne "a pleasant surprise," and he intends to find ways for him and Cockburn to share the hardwood.

"(Payne's) got a very good 15-17 foot jump shot. ... (It's) something that is a great addition for us," Underwood said. "They're going to play together some. There's no doubt. And (Payne) can guard anybody. He literally can guard point guards and (centers). He's got great, great quickness. He's got that great 7-5 wingspan, so his versatility is something I'm really excited about."

Cockburn is stoked as well, although the Illini's opponents probably won't feel the same way.

"It looks scary, man. It looks scary," Cockburn said of competing alongside Payne. "Playing any one of us by ourselves is scary. But if you put two guys out there that's physically dominant and has a high motor that never (stops) moving, it gives a lot of (teams) trouble, man. It's gonna be crazy."

Payne said he transferred to Illinois because he "needed a fresh start," and his new teammates have welcomed him with open arms. He's confident that he'll be able to contribute right away because having already played high-major basketball: "There's nothing I never did before or a stage I never played on before."

Payne will make his Illini debut in the team's season opener at home against Jackson State on Nov. 9. Illinois is eyeing consecutive trips to the NCAA Tournament for the first time in 22 years.

"I'm gonna come in and work hard," Payne said, pointing at the slogan on the tongues of his sneakers. "Just try to be the 'Every day guy' like they say."

Check out photos and videos of Illinois' open practice

Watch now: 'I do want balance throughout the lineup' says Blues coach

Boyd: I'm off to cover the Indiana Pacers, but first I'd like to say thank you for changing my dream

"I won't be joining Pacers guard Malcolm Brogdon in the backcourt, instead joining him in the press conference room. But again, that's the beauty of dreams and how they change."

"They've been here since the onset, since it was rough," coach Brad Underwood said.

The Illini were in it from the opening whistle. They used seven-man fronts and the hard-charging abilities of McCray and Brown to outmuscle Penn State.

Illinois has high expectations for the 2021-22 season and the Associated Press Top 25 preseason poll reflects that.

Watch now: Illinois' Bret Bielema says 'as a head coach you're only as good as your roster"

"You know what? Believe it or not, I used to be the tailback before. Way, way back (when we were kids), though," Sydney Brown said, laughing.

Watch now: Who will start at quarterback for Illinois? Brandon Peters or Artur Sitkowski?