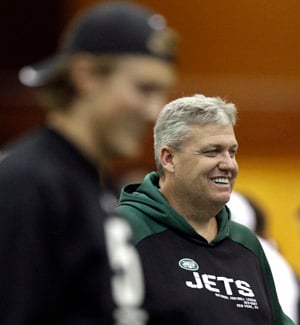 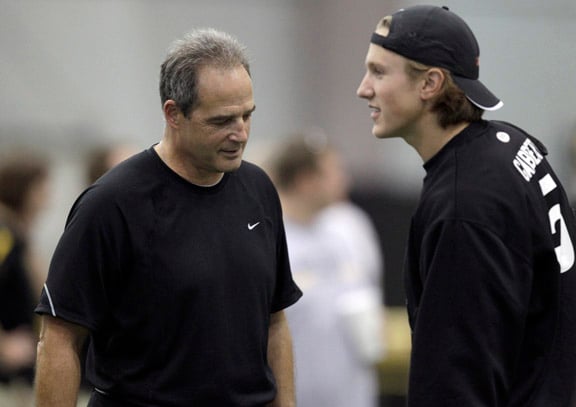 The Mizzou weight room was so crowded it was hard to move around. As each Tigers draft prospect took his turn at the 225-pound bench press, former teammates shouted encouragement. They shared the space with more than 100 NFL coaches, scouts and personnel executives - all 32 teams were represented.

Several dozen spectators watched from the upstairs balcony - a mix of agents, media people and friends and relatives of participants. The media roster included Pro Football Weekly, Sporting News, SI.com and the Kansas City Star, plus draft analysts Gil Brandt (NFL.com), Mike Mayock (NFL Network) and Todd McShay (ESPN). And, naturally, just about every media outlet in mid-Missouri was there as well.

Not even Cam Newton's Auburn workout attracted this kind of media crush, one scout said.

One of the spectators watching the bench press wore a shirt that read: Jasper Simmons, Best Pick For Any Team.

Where'd he get that shirt?

"God made it," said a smiling Terry Simmons, the father of the Mizzou safety. He had flown in from Pensacola, Fla., to watch his son perform for the pro scouts.

When it was time for the field drills, the portable bleachers were packed in the Dan Devine Indoor Pavilion. The event was closed to the public, but somehow about 400 spectators found their way inside. For some, watching the workout wasn't the only purpose for being there.

"That's one of his favorite players," Blaine said. "Hey, my brother's 10. He can do whatever he wants."

Pro days are often quiet, businesslike affairs. But at times it was hard to tell if this was pro day or pep rally.

Depending on what happened during the workouts, there were cheers, gasps, applause and sighs. When Gabbert was done with his throwing session, QB tutor Terry Shea - a former NFL assistant coach who in effect was emcee of Gabbert's workout - turned to the crowd, took a small bow and announced: "On behalf of the University of Missouri, we thank you."

In 36 years of college coaching, the last 10 as head coach at Missouri, Gary Pinkel had never been part of a pro day with such hoopla.

When you have a quarterback (Gabbert) who looks like a sure top 10 pick and could be among the first couple of names called, your pro day will attract attention. But it was more than that. For example, coach Rex Ryan of the New York Jets wasn't there to watch Gabbert - he was there scouting Mizzou defensive end Aldon Smith, who is expected to go mid to late in the first round.

For years, there wasn't much reason for NFL scouts to make their way to Columbia. But Mizzou's pro day on March 17 underscored the fact that times have changed in Tigertown.

"Absolutely, and not just because of the two kids you're talking about this year that are going to be high picks," Rams general manager Billy Devaney said. "We've said this the past few years with kids coming out of Missouri: The program is run like a professional program. These kids are ready to play - they're NFL ready. They're extremely well coached. They're mentally tough. They're physically tough. They know football."

If pre-draft projections hold up, only SEC powers Alabama and Florida will match or exceed Mizzou over that three-year span:

• The Crimson Tide will have six first-rounders taken in the '09, '10 and '11 drafts if defensive tackle Marcell Dareus, wide receiver Julio Jones and running back Mark Ingram all go in Round 1 this year.

• Florida will have five if guard-center Mike Pouncey goes in Round 1.

Southern California could get to five, but only if safety Rahim Moore joins offensive tackle Tyron Smith in the first round this year. And that seems unlikely according to almost all of the mock drafts out there.

"I've known Pinkel a long, long time," said Brandt, who made his name as a personnel executive with the Dallas Cowboys from 1960 to 1989. "I think the guy has done a fabulous job at Missouri. The last couple years, they have been on fire as far as getting (draft) prospects."

Prior to Maclin and Hood in 2009, Mizzou hadn't had a first-rounder since Justin Smith in 2001. And prior to Justin Smith, you had to go back to big John Clay in 1987 for another first-rounder. So it has been a long dry spell. But on April 28, Missouri will have a player drafted in the first round for an unprecedented third year in a row.

"I think every player coming out of high school who goes to college wants to play in the NFL," Pinkel said. "Now, we know it's unrealistic that that's going to happen, but still the top programs in the country produce the most NFL players on a consistent basis. And slowly we're racheting it up; we're moving ourselves up into that area. Now, we haven't arrived yet in any way. So let's keep 'er going. All's I care about is keeping it going."

All told, Pinkel has had 17 players drafted during his tenure at Mizzou. Gabbert and Aldon Smith will add to that total, and cornerback Kevin Rutland and center Tim Barnes also could be added to that total this year.

Making all those numbers even more impressive is the fact that very few of the Mizzou draft picks were of the "five-star" variety as high school recruits.

"There's no ‘stars' in our evaluation system," Pinkel said. "We just do what we do. We don't really get caught up in what other people think or say or do."

One of the key facets of that evaluation system is something Pinkel calls speed potential.

"You can judge that by track times," he said. "You can judge that by vertical jump. By standing broad jump. You can see athleticism a little bit. But if we bring in a player with speed potential ... we can develop his speed and quickness. And then obviously, we can coach him and develop his fundamentals, and we think we can turn him into a really good football player."

Rutland, who joined Gabbert and Smith as Mizzou players invited to this year's NFL scouting combine, is a case study in player development. As a prep quarterback out of Houston, he was recruited to play cornerback at Missouri. Rutland was redshirted as a freshman and didn't break into the starting lineup until his junior season - his fourth year in the program. Now he has a chance to be a late-round pick.

"It took awhile for me to get things kind of where I wanted 'em, and the coaches never left my side," Rutland said. "That's one thing I'll always say about Mizzou. When they get a player, they're going to work to develop that player until the last time he's there. I thought they would give up on me, but it never happened."

Several factors have converged, and fed off one another, in Mizzou's recent success on the field and success in getting players into the NFL:

• Forty victories over the past four years - the 10th-highest total in Division I over that span - has attracted better high school recruits and brought more NFL scouts to campus.

• High graduation and academic progress rates also help in recruiting and in general tell pro scouts that the prospect should be able to handle complicated NFL playbooks.

• There was a time when Mizzou's facilities were a drawback in recruiting, but after millions of dollars of upgrades, that's no longer the case. It also makes for a more pleasant experience for pro scouts, whether they're on campus for a pro day, a private workout or an in-season visit.

• The fact that Mizzou players have had recent success in the NFL also works both ways. For high school recruits, it makes the NFL dream seem a little more tangible. For NFL teams, it means the school must be doing something right.

"Yeah, there are programs that are like that - that have that reputation," Devaney said. "Certain schools do a great job of getting their kids ready for the NFL. And Missouri's certainly one of those."

And such a statement has rarely been applied to Mizzou over the years.

Rams Talk: Sound off about the 2012 schedule