On Nov. 19, 1960, undefeated Missouri squared off against Kansas in football. To this day, the schools still don't agree on the result. Kansas scored the most points in the game on the field, but the Jayhawks deliberately suited up a player who had been ruled ineligible. As a result, the Big Eight ruled the game a 1-0 Missouri victory and named the Tigers as conference champs.

Even today, the two schools still don't agree on the series record. KU states Mizzou has an 56-55-9 lead, while MU contends it leads the series 57-54-9.

Here was the Post-Dispatch original coverage of that game.

COLUMBIA, MO. - Missouri couldn't climb the highest mountain. Kansas today flung 70 years of tradition and a fired-up football team at the Tigers, outplaying and overpowering them, 23-7, to take the Big Eight Conference Championship.

A record Memorial Stadium crowd of 43,000 mournfully watched Ol' Mizzou miss its first perfect season in history, the conference crown and the national collegiate championship. An Orange Bowl bid still was extended and accepted, however.

Faced with the inviting target of the nation's No. 1 team in this traditional test, the Jayhawks made the home team as blue as the visitors' helmets and pants. As a result, Kansas once more has taken the edge in the lengthy series in which Missouri twice has drawn even, but never has been in front.

Ol' Mizzou has been trying since 1891 and probably never had more at stake than in this afternoon's game, which enabled Kansas to gain its first undisputed league title since 1930, when big Jim Bausch jarred 'em for the Jayhawks.

So K.U., last school even to share the conference championship with Oklahoma, in 1946-47 before the Red Wreckers' 12-year dynasty, achieved the distinction of succeeding the Sooners in the Big Eight's revolt of the Seven Dwarfs.

Because of illegal recruiting activities, however, the Jayhawks are not eligible for a bowl game. And, ironically, the player whose acquisition drew NCAA censure, Bert Coan, was the individual star. Kansas's decision to play the TCU transfer student in defiance of Big Eight rules is expected to be ruled on by the conference's faculty committee, Commissioner Reaves Peters said.

Coan, one of the quick back-field giants operating behind Kansas's agile, aggressive line, led the same's ballcarriers in a contest of little offense and considerable stout defensive play by both sides. The husky sophomore from Pasadena, Tex., rushed for 67 yards, six more than the entire Missouri back-field, plunged for one touchdown and scored another on a 19-yard pass.

The Tigers, fifth nationally in rushing with a robust average of more than 275 yards a game, were whipped on the ground, 186 yards to 61, and couldn't compensate in the air against the alert, hard-nosed K. U. defense. The Jayhawks, needing five fewer passes to match Missouri's modest 53-yard aerial total, took the Tigers' pet play away from them the power sweep with effective strategy and intent, savage blocking execution.

Against the single wing blocking favored by Ol' Mizzou, the Jayhawks crashed their ends part way to prevent the Tiger wedge from turning intact in the alley between end and tackle. Strong defensive pressure inside, quick linebackers outside and active secondary support helped the K. U. ends Missouri had hoped to blow out of the stadium.

Although never free to roam, Kansas dominated this one to the extent that it shrugged off the potential impact of three first-quarter fumbles, then held Missouri without a first down until the third period was six minutes old. By then the Jayhawks held a 10-0 lead that this day was as solid as Fort Knox or wherever Uncle Sam's gold is. Small wonder curly-haired Jack Mitchell, the Kansas coach deprived of an Orange Bowl bid by Dan Devine a year ago at Lawrence, 13-9, called this "the most gratifying victory" he ever had known.

Don Faurot, Missouri's athletic director, appeared to touch on a factor in the upset of the seven-point favorite. Announcing the acceptance of the Orange Bowl bid minutes after the game, Faurot expressed admiration for and sympathy toward the team and coaching staff. "They did a great Job," Don said, "but they just didn't have enough left to snap back from that great, yet punishing effort last week at Oklahoma. Not enough time, either."

The Sooners held Kansas even at Lawrence, 13-13, accounting for the only conference blemish on the record of a fast-closing club that lost only to Syracuse and Iowa. Missouri, 9-1 over all, broke a 24-year Jinx at Norman a week ago against Oklahoma, 41-19.

Until this bluebird afternoon, Kansas hadn't won at Columbia since 1946. And this one, with the Tigers having more to lose than the Jayhawks, became only the second K. U. triumph here since Frank Carideo resigned as coach after the 1934 Thanksgiving Day rout. "We were so, so ready this time," Mitchell emphasized afterward.

Kansas was so keyed up it almost hurt at the beginning when the Jayhawks decided to take the wind and give up the ball. Three times in the first period the visitors fumbled stiffly. Norm Beal, Danny LaRose and Ed Blaine recovered for Missouri on the K.U. 48, 46 and 42.

On past weekends a foe would have been fortunate if the Tigers had put only two touchdowns on the scoreboard out of those three opportunities, but this time they couldn't budge. And before the day was done the mechanically-clean Mizzou team had coughed up three fumbles, too, had been a victim of a pass interception and had juggled punts and hand-offs.

As Devine said, "we made more errors today than in the other nine games put together, but Kansas was the best team on the field and deserved to win."

Before the half ended scorelessly, Kansas had recovered Mel West's second fumble on the 11-yard line, but had been turned back at the 3 in a spirited goal-line stand. Again, a result largely of a clever screen pass from John Hadl to Hugh Smith, the visitors drove for first down on the 14 before the Tigers defensed triple-talented Hadl handsomely on the split-T option series. And when end Tommy Carpenter finally threw Hadl for a 12-yard loss, John Suder tried a 33-yard field goal that was short.

When the Jayhawks finally opened the scoring four and a half minutes into the third period they did so on a field goal from even farther out. However, it was Roger Hill, a strong-legged halfback, whose powerful kick from the 36 became a 46-yard three-point play.

Three plays later Norris Stevenson fumbled and K.U.'s Gil Wilson recovered at the M.U. 19. Two plays went nowhere before Hadl passed to Coan at the northeast corner, where a Missouri secondary man was late. Conn caught the ball at the 1 and trotted in. Suder's conversion made it 10-0.

As the third period ended the Jayhawks went to work on a 69-yard scoring march of 13 plays, featured by Coan's 26-yard spin around right end on quick pitchout. Doyle Schick inside helped, too, before Coan pushed through from two yards out.

With a flashback to the surprising, pleasant season past, West took the next kickoff, ran to the west sideline, cut back and was overtaken from behind after he had carried from the Missouri 10 to the Kansas 36. Ron Taylor's 17-yard screen pass to Andy Russell offset losses and finally Taylor hit a fourth-down TD pass to West from the 17.

Only 5:24 was left and the Tigers tried - and missed - an onside kick. This just wasn't over, Schick picked off one of Taylor's passes at the 24 and Rodger McFarland, understudy to Hadl, fired a 3-yard jump pass to end Sam Simpson for a touchdown.

Missouri had climbed farther and faster than expected this Orange Bowl season, but just hadn't been able to climb the highest mountain.

Mizzou plans to have Memorial Stadium back to full capacity for the 2021 football season for what he believes can be a special one for Eli Drinkwitz's program.

Summer school's in session for Mizzou's cast of newcomers

Tigers coach shared some first impressions of his newcomers on Thursday.

The 12-team playoff movement continues to have momentum as CFP board of managers authorizes a summer feasibility study.

Defensive back from Texas, a 2022 target, changes commitment after official visit to Mizzou. 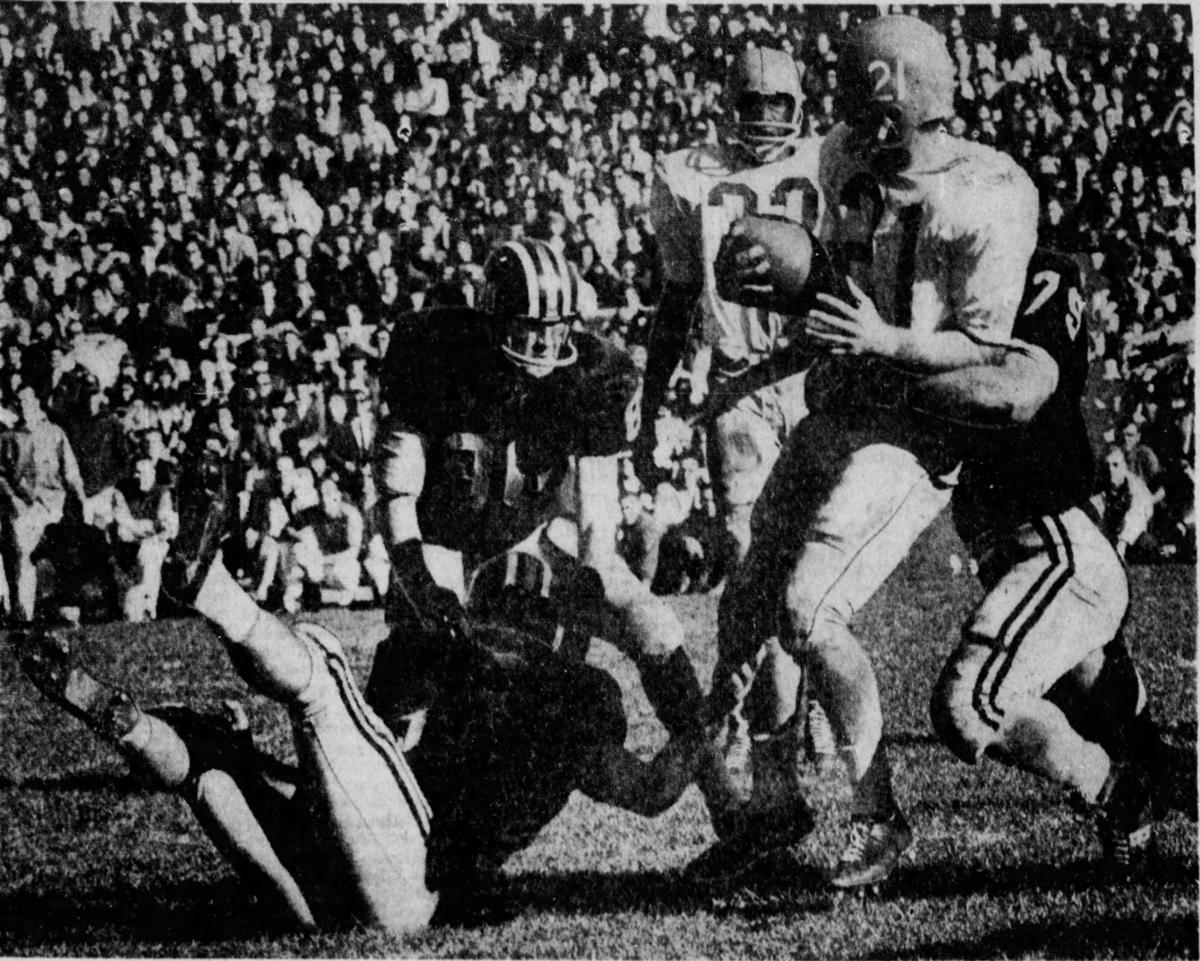 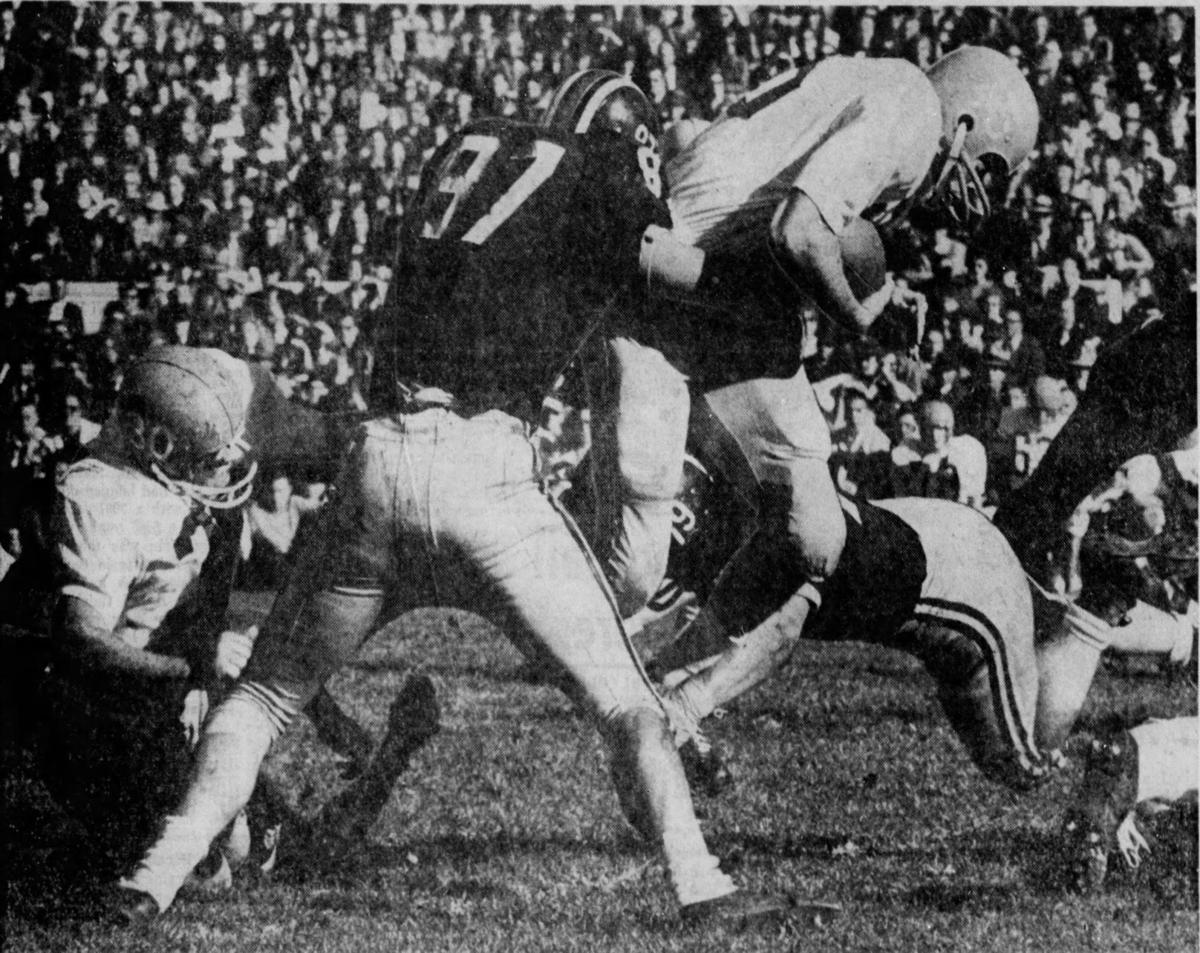