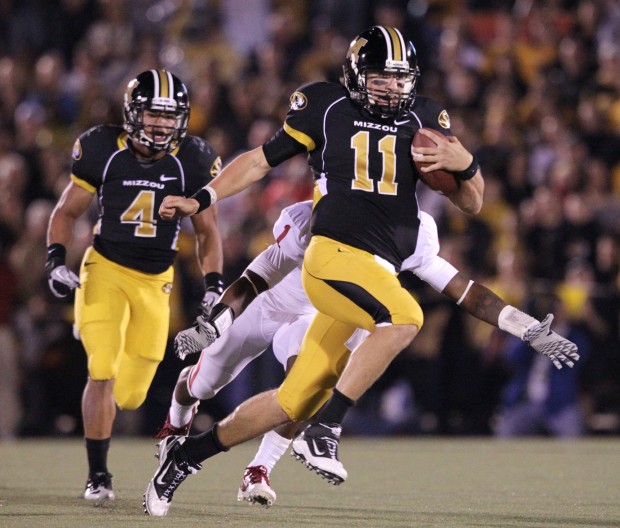 Mizzou QB Blaine Gabbert's ability to rise to the occasion in big moments could make the difference Saturday against Nebraska. (Post-Dispatch photo by Laurie Skrivan)

October 23, 2010 -- Missouri quarterback Blaine Gabbert runs the ball as his line blocks for him in second quarter action during a game between Missouri and Oklahoma at Faurot Field in Columbia, Mo. Chris Lee clee@post-dispatch.com
BY TOM TIMMERMANN | > 314-340-8190

COLUMBIA, MO. • It's been almost three years since quarterback Blaine Gabbert changed his mind and decided to play football for Mizzou after initially committing to play at Nebraska. Does he think enough time has passed that Cornhuskers fans will be over it when the Tigers travel to Lincoln on Saturday?

Gabbert can expect to hear a lot of things when the Tigers, sixth in the BCS standings and ranked seventh in the Associated Press poll, face 14th-ranked Nebraska in a game that will go a long way toward deciding the Big 12 North champ and, just maybe, the national championship picture. The Tigers inserted themselves into the picture with their win over Oklahoma, the No. 1 team in last week's BCS standings, on Saturday and even with all the love they're getting nationally now, a second straight win over a top 25 team would cement their status among the nation's elite this season.

Since a team's success is closely correlated with its quarterback, that success means Mizzou and Gabbert are on a roll, with his past two games, pivotal wins over Texas A&M and Oklahoma, being among his best. Two weeks ago in College Station, Gabbert completed 31 of 47 passes for 361 yards and three touchdowns. Against OU, he completed 30 of 42 passes for 308 yards. In the fourth quarter, he completed eight of nine passes for 95 yards and a touchdown.

Gabbert is sixth in the nation in passing, averaging 25.86 completions a game, is 16th in passing yards per game at 271.29, and on Monday was named one of 16 semifinalists for the Davey O'Brien National Quarterback Award and took Big 12 offensive player of the week honors.

Gabbert has thrown just three interceptions all season, none in Big 12 play. Among Big 12 starting quarterbacks, the only other player with no interceptions is Nebraska's Taylor Martinez, who has 64 fewer attempts. In Big 12 play, Gabbert has completed 66.1 percent of his passes with a 144.1 efficiency rating, numbers that are even more impressive when you consider in the past two weeks, Mizzou has run fewer bubble screens, which are such gimme completions that the Mizzou staff considers them running plays in their in-house statistics.

But ultimately, quarterbacks are rated by their number of wins. The Oklahoma game was Gabbert's 20th as a starter at Mizzou. His record in those games is 15-5.

"That's pretty good," coach Gary Pinkel said Monday. "I think he played an exceptional game last week and played really well against Texas A&M. I think he's playing very poised. He's getting a lot of time from his offensive line and the receivers made plays. A lot goes into it.

Offensive coordinator David Yost said he sees the game slowing down for Gabbert as he amasses experience at the college level.

"He's playing with a lot of confidence," Yost said. "The game is steadily slowing down for him from week to week. You can see, it looks like he's playing slower, more relaxed. He can see where he's going. His preparation has been really good and he's executing the game plan at a high level."

Said Gabbert: "Any time you can start a full season as a sophomore you benefit from it. You prepare week in, week out, you know what to expect from opposing defenses. It really just slows down after a while."

This will be Gabbert's first trip to Nebraska as a starter, which undoubtedly will bring him all sorts of flack, but last year's meeting with Nebraska at Faurot Field was also eventful. He was sacked in that game and injured his ankle, which limited his effectiveness in that game and the ones that immediately followed. Gabbert completed just 17 of 43 passes on that rainy night for 134 yards and no touchdowns. Asked on Monday what he remembered about that game, he offered, "It was raining. That's about it."

Actually, that's what Yost remembers too, though with a slight addendum.

"It was really wet," he said, "and Blaine hurt his ankle. When it started off, we were executing. Then he hurt his ankle and it took some of the things we wanted to do away. That hurt his effectiveness. He was doing a lot more scrambling around (back then) and making plays and that hurt us. ... Blaine's playing at a much higher level now than he was at that time."

But if Gabbert can expect a hostile environment in Lincoln on Saturday, there's no evidence it will bother him. Gabbert is 4-1 in road games as a starter; Texas A&M was another tough place to play, and he had few problems there. And Mizzou devoted a lot of attention in the offseason to how to handle a defense like Nebraska's.

All eyes will be on him Saturday.

Whatever comes next for MU, the events of the last few days still resonate, will be tough to trump and likely remain indelible for many.

Get past Nebraska and an undefeated regular season becomes a very tangible possibility.

Aldon Smith is tired but happy after victorious return

Star defensive end got in for 52 plays vs. OU after missing three games with broken leg.

Football was a hot commodity on St. Louis television last weekend, as the teams of most local interest drew their best rating in years.

Mizzou QB Blaine Gabbert's ability to rise to the occasion in big moments could make the difference Saturday against Nebraska. (Post-Dispatch photo by Laurie Skrivan)

October 23, 2010 -- Missouri quarterback Blaine Gabbert runs the ball as his line blocks for him in second quarter action during a game between Missouri and Oklahoma at Faurot Field in Columbia, Mo. Chris Lee clee@post-dispatch.com
© Copyright 2021 STLtoday.com, 901 N. 10th St. St. Louis, MO | Terms of Use | Privacy Policy
Powered by BLOX Content Management System from TownNews.com.
You don't have any notifications.