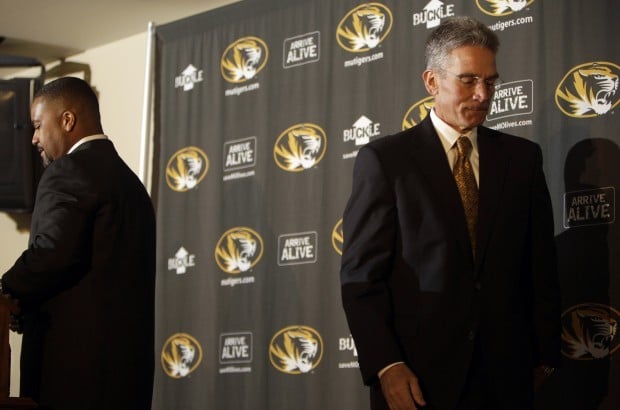 Missouri athletic director Mike Alden, right, walks off the stage after introducing Frank Haith, left, as the new basketball coach at the University of Missouri Tuesday, April 5, 2011, in Columbia, Mo. Alden has been criticized by some for the somewhat surprising choice of Haith, who was head coach at the University of Miami for the past seven season. (AP Photo/Jeff Roberson) 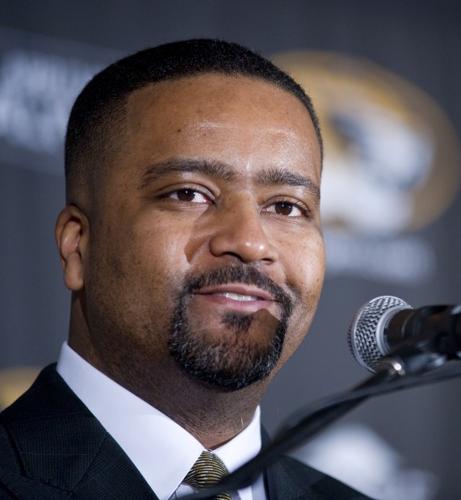 April 5, 2011 -- Frank Haith speaks at a press conference introducing him as the new head coach of the University of Missouri basketball program at Mizzou Arena in Columbia, Mo. (L.G. Patterson photo)

With another season behind and Mizzou coach Mike Anderson engaged in what became a spring ritual of wanderlust, Mizzou athletic director Mike Alden marshaled his resources in preparation to replace him.

He turned to colleagues around the nation to talk through ideas and names and potential fits for Mizzou, trying to sift through a complicated matrix to determine who was not only most desirable but also get-able.

MU would need someone relatively young yet proven, someone with a clean record of program integrity and academic emphasis, someone with the juice to recruit in ways Anderson never quite could.

And someone who wanted to stay for the long term.

One name came across in neon, improbable as it seemed:

Purdue's Matt Painter, in the midst of a four-year streak in which he would be named Big Ten coach of the year three times at his alma mater.

Yet Painter was unhappy with the cheap-skate culture of Purdue's athletic department, which made him just the eighth-highest paid coach in the Big Ten and nickel-and-diming his program.

Moreover, Painter had let it be known he was specifically interested in Mizzou. That intrigue tracked back to Purdue's 2007 game in Columbia, when he was smitten with Mizzou's facilities.

He shared that with several people, including at least two who had the ear of Alden.

TOP CHOICE IS OUT

So those mutual attractions were in the air as far back as last spring when Anderson took days to entertain the Oregon job before declining the overture.

It's unknown whether Alden simply kept Painter at the top of his list for future reference. But just over 48 hours after Anderson's departure for Arkansas on March 23, Painter emerged as MU's No. 1 target.

A day later, Mizzou had contacted Painter's agent. Three days after that, on March 29, Alden and other MU representatives traveled to Florida to make a pitch they believed was well-received.

Twenty-four hours later, Painter turned down Mizzou for reasons a source close to the situation found unpalatable, including a confusing concern of Painter's that he at once had too many players in Anderson's system coming back in 2011 yet too many leaving afterward.

Painter's inability or unwillingness to articulate a stronger reason left open to question whether he was too emotionally connected to Purdue despite his complaints or just so shrewd that he leveraged the situation into roughly a $1 million-a-year raise to $2.3 million annually.

To Mizzou, the reason didn't matter as much as the reality: a target that it had in mind for more than a year was out.

Moreover, at least two of the other candidates Alden was deeply interested in were off the board when Cuonzo Martin left Missouri State for Tennessee and Brian Gregory went from Dayton to Georgia Tech.

Several who know Alden well believe he was so taken with Martin that he was ready to make him the second choice despite only being a head coach for three seasons. Had Martin found a way to fend off scandal-ridden Tennessee for 48 hours or so instead of taking the job, he might well have been named Mizzou's coach last week.

Instead, Alden, his search committee and consultant Bob Beaudine essentially started over.

But according to a report on the Internet site "SportsbyBrooks" citing Mizzou administration sources, MU's original list had more than two dozen names on it.

None of those names, he wrote, was Frank Haith of Miami.

By Saturday, the day of the national semifinals in Houston, the buzz about Mizzou's next course of action was scattershot and seemingly conflicting.

New Mexico's Steve Alford forcefully denied he had spoken with MU as all the "coach chatter" had it, according to one source in Houston, and denied it all the more after a strange report in The Albuquerque Journal that said three coaches had told the paper Alford had already accepted the job.

Meanwhile, Minnesota's Tubby Smith was approached by Mizzou or a representative of the school but declined to pursue it any further, a source close to Smith told the Post-Dispatch's Bryan Burwell.

What was true and how true remains unclear.

Were whatever contacts that were made mild explorations or potential offers in the making? Was Mizzou spreading itself out, taking a more balanced batting stance? Was it creating diversions for potential competition ahead with N.C. State?

Whatever smoke was blowing, by the weekend MU began speaking with Haith, 45, whose persona and priorities largely conformed well to what Mizzou sought ... except for the pesky matter of his record in seven seasons at Miami: 129-101 overall, 43-69 in Atlantic Coast Conference play and just one NCAA Tournament appearance.

Just how the courtship was kindled remains uncertain, but between the work of the search committee, Beaudine and others Alden reached out to, it gained traction and perhaps ultimately blossomed with the help of former Missouri assistant AD Ross Bjork, now the AD at Western Kentucky and even at a distance an apparent common denominator between the sides.

Bjork took over at Western after five years at UCLA, which followed three years at Miami.

As an associate AD there, he led the search committee that hired Haith, who had been a highly regarded assistant at Texas.

"To me, that's why you're willing to share information. You want all to be successful."

Left unsaid by Bjork was the fact that Miami has been widely believed to be ready soon to move on from Haith, 10-22 in ACC play the last two seasons.

But to Bjork, Haith was a swan who could flourish with a change of environment from a school that has struggled to embrace basketball.

The program was shut down from 1971-85 for a lack of funding, and it has had an uphill battle to fit into the ACC because of its dearth of tradition and support compared to its new brethren.

"When he took the Miami job, we both acknowledged - and (Miami AD) Paul Dee for that matter - that Frank was taking a risk by having this be his first job," Bjork recalled. "Because Miami was going into the ACC, we knew what we were up against from a basketball history standpoint. And at that time, Miami was going into (just) its 20th year of having basketball back.

"So if you combine all those factors, young coach, new coach, first-time head coach, the ACC tradition, Miami only having basketball back for 19 years, Frank knew that he was taking a risk. We acknowledged that, he acknowledged that."

After some ups and downs through his first three seasons, including going 12-20 in 2006-07, Haith took Miami into the second round of the NCAA Tournament and finished 23-11 - MU's record the last two seasons.

But despite 60 wins the last three seasons, Miami never made it back to the NCAA tourney, leaving his tenure there marked more by four NIT appearances.

"He had it going in the right direction," Bjork said, "but getting over the hump proved to be difficult."

Which made for a jarring initial reception when news of Haith's hiring trickled out late Sunday night.

Yet Bjork believes Haith did wonders under the circumstances.

Superimposed over a better basketball blueprint in the form of MU, Bjork believes that record will clean up well for the very reasons he believed in Haith in the first place.

After Bjork met him in a restaurant in San Antonio during the 2004 Final Four, he reported back to Dee.

" ‘This guy is dynamic; this guy is going to be a great coach some day,' " he recalled saying. "You could see it. He was organized, passionate, was known as a great recruiter, had great people skills. ...

"He connects with people, and that's what recruiting is all about."

"I don't feel like because of the criticism of the hire that I have to do something right away just to prove something to people," Frank Haith said.

Missouri athletic director Mike Alden, right, walks off the stage after introducing Frank Haith, left, as the new basketball coach at the University of Missouri Tuesday, April 5, 2011, in Columbia, Mo. Alden has been criticized by some for the somewhat surprising choice of Haith, who was head coach at the University of Miami for the past seven season. (AP Photo/Jeff Roberson)

April 5, 2011 -- Frank Haith speaks at a press conference introducing him as the new head coach of the University of Missouri basketball program at Mizzou Arena in Columbia, Mo. (L.G. Patterson photo)