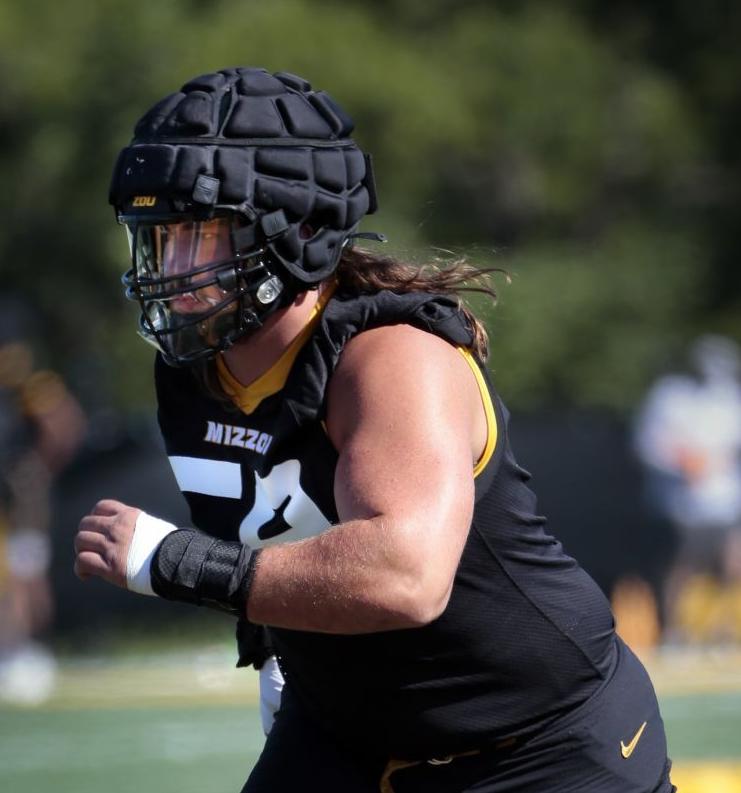 Missouri offensive lineman Case Cook runs drills during the first day of football practice for the 2020 season at the University of Missouri in Columbia on Monday, Aug. 17. (Robert Cohen, rcohen@post-dispatch.com) 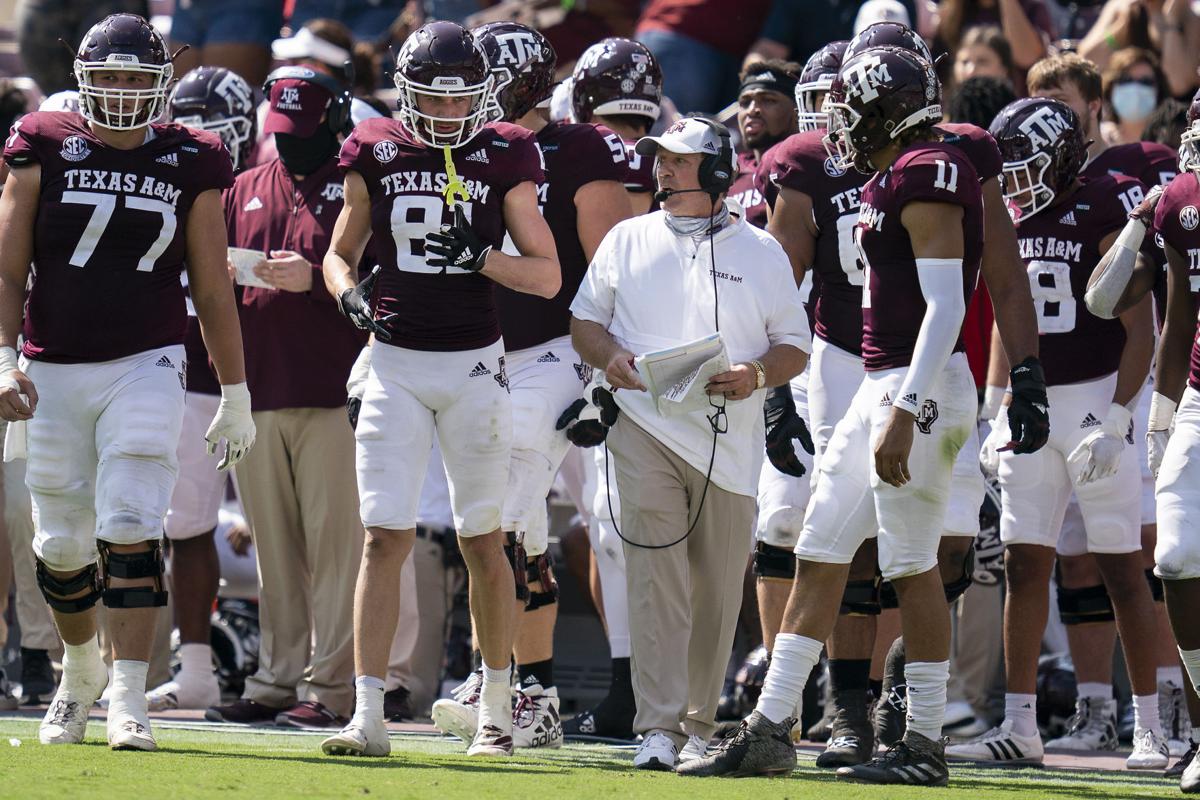 The Southeastern Conference pulled off a football season in the middle of a pandemic last year, but something was missing from the start. The SEC’s annual preseason media days was a scheduling casualty last July as the league scrambled to salvage the season, canceling what’s become one of the sport’s rites of summer.

A year later, with the start of the season seven weeks away, the four-day SEC kickoff event is back, starting Monday at its traditional home, the Hyatt Regency Birmingham-Wynfrey Hotel in suburban Hoover, Alabama.

There are some changes this year. The SEC has limited the number of credentialed media and will enforce some distancing parameters in the usually stuffed ballrooms and corridors throughout the hotel. Unlike past years, fans will not be allowed inside the Wynfrey — Alabama and Auburn fans annually squeeze their way into the first-floor lobby to get a glimpse of their teams’ coaches and players — and instead will have to gather outside and won’t be allowed to collect autographs. Also, teams are limited to two player representatives instead of the normal three.

For just the third time since making their SEC media days debut in 2012, the Missouri Tigers won’t be bringing a quarterback to the event. Instead, coach Eli Drinkwitz will arrive with offensive guard Case Cook and defensive lineman Akial Byers. (The Tigers also didn’t bring a QB in 2012 and 2016.)

But their contingent doesn’t arrive until Thursday, the fourth and final day in Hoover. Long before then, the best stories of the week will begin to unfold. Here are 10 to follow over the next four days.

1. Hoover rookies on deck Eight of the league’s 14 coaches will be making their media days debut for their respective schools: the four new coaches in 2020 and the four first-year coaches for 2021. Among those eight are some of the most intriguing personalities and colorful conversationalists across the league, including Mizzou’s Drinkwitz (Thursday), Mississippi State’s Mike Leach (Wednesday) and Mississippi’s Lane Kiffin (Tuesday).

2. Shots firedStarting with SEC commissioner Greg Sankey’s opening media session Monday, the week promises to include plenty of talk about COVID-19 vaccinations, especially as the Delta variant continues to impact states in the SEC footprint.

The conference has launched a social media campaign urging athletes at member schools to get their shots before the season to avoid the chaos of last year’s schedule. Unlike last year, the major conferences aren’t expected to reschedule games on the fly to accommodate teams depleted by positive tests and contact tracing and will instead institute forfeits if teams can’t field enough players.

Expect to hear a lot about North Carolina State’s baseball team this week: The Wolfpack became the latest COVID cautionary tale when their team was sent home from the College World Series after eight players tested positive.

Can Alabama continue its dynasty after a whopping six players were taken in the first round of this year’s NFL draft? Of course. The Tide bring back a loaded defense as Saban restocks his explosive offense with more five-star talent at the skill positions. He’ll address the media on Wednesday. On Friday, the SEC will release the media’s preseason all-conference teams and predicted league standings. Expect plenty of Crimson at the top.

4. Cashing in on NIL It’s been nearly three weeks since the NCAA allowed college athletes to profit off their name, image and likeness, prompting players from across the league to announce personal endorsement deals. Expect plenty of questions on the issue this week, including some coaches who surely will grumble over loopholes in state legislation that will impact recruiting.

Another compelling side piece to the new NIL landscape: Some media outlets will start paying college athletes for interview access. Just last week, a recruiting website that covers Texas A&M secured exclusive interviews with two Aggie players who were each paid $10,000 by a College Station real estate company.

5. Shortage of proven star powerFourteen SEC offensive skill players were among the first 100 selections in this year’s NFL draft, which means there’s a new wave of firepower ready to pounce, including a few slated to appear in Hoover this week.

Ole Miss quarterback Matt Corral is the league’s likely preseason choice for All-SEC honors — unless Georgia’s J.T. Daniels is the more popular choice. Both meet the media Tuesday. Otherwise, there aren’t a lot of high-profile offensive playmakers across the league, especially judging by the list of attendees: 14 of the 28 players coming to Hoover are linemen. Four teams are sending only linemen: Kentucky, Mizzou, Texas A&M and Vanderbilt.

6. Transfer talkOther than NIL legislation, the top headlines across college football this offseason focused on the transfer portal and the endless roster reshuffling.

Some of the most prized immediately eligible transfers arrived in the SEC, including a few who jumped from one SEC roster to another: Alabama linebacker Henry To’o To’o (from Tennessee) and Georgia receiver Arik Gilbert (Louisiana State).

Expect some coaches to squabble over new rules that have turned recruiting into college free agency.

7. Heat rising at LSUThere’s no doubt which SEC team needs a bounce-back season more than anyone: Louisiana State. After a dazzling 15-0 run to the national championship in 2019, coach Ed Orgeron’s Tigers couldn’t overcome injuries and defensive lapses last season during a 3-5 start. LSU rallied to win its final two games to salvage a .500 record before imposing a conveniently timed postseason ban for some NCAA malfeasance.

Less than two years after a perfect season, Orgeron sits upon the hottest seat in the conference thanks to last year’s stumbles and a trail of off-field missteps. He shook up his staff this offseason and turned loose his offense and defense to young upstarts from the NFL. Will that be enough to cool the simmering heat in Baton Rouge?

8. Vols makeoverThe Heupel experience should be fascinating to watch in Knoxville. The transfer portal gutted the Volunteers’ roster, and looming NCAA sanctions aren’t going to make the rebuild any easier for the first-year coach.

But the Vols can count on a more prolific offense under Heupel’s watch, assuming he settles on a quarterback from the stash of transfers he’s collected since taking over Rocky Top. The former UCF head coach and coordinator at Oklahoma and Mizzou doesn’t care much for the spotlight, but there’s no escaping the Hoover glare when he meets the media Tuesday.

9. Breakthrough for Aggies?In a few more years, the proposed 12-team playoff model will give more SEC teams a chance at the national championship. But until then, pressure is mounting for one program to either unseat Alabama from the four-team bracket or join the Tide in the playoff.

Texas A&M just missed out last year, finishing fifth in the final CFP rankings. With one of the biggest budgets in college sports and one of the few head coaches with a national championship ring (Jimbo Fisher), the Aggies might have the team to crack the four-team field this year.

10. The Pirate sets sailIf any coach in the conference deserves a mulligan it’s Leach. The maestro of the Air Raid offense had to rely on a chippy defense last year to squeeze four wins out of a team ill-equipped to challenge in the SEC West. Whether the Bulldogs can emerge from the pits of the division, he’ll have something interesting to say Wednesday.

Burden could give Mizzou instant jolt in 2022

After starring at Cardinal Ritter and East St. Louis, the five-star receiver could become an instant factor in Tigers' offense next season.

It's a light week in the SEC with five teams on a bye, but LSU-Ole Miss features a homecoming for the Tigers' embattled coach.

Teams are on the upswing after bottoming out several years ago.

The Tigers, the SEC's most penalized team in conference play, resumes action next week at Vanderbilt

Missouri offensive lineman Case Cook runs drills during the first day of football practice for the 2020 season at the University of Missouri in Columbia on Monday, Aug. 17. (Robert Cohen, rcohen@post-dispatch.com)