The Latest: Bloomberg team quick to respond online to debate

As Mizzou's search continues, could a service academy coach thrive in the SEC?
0 comments
Share this
Subscribe today: $3/3 months
1 of 2 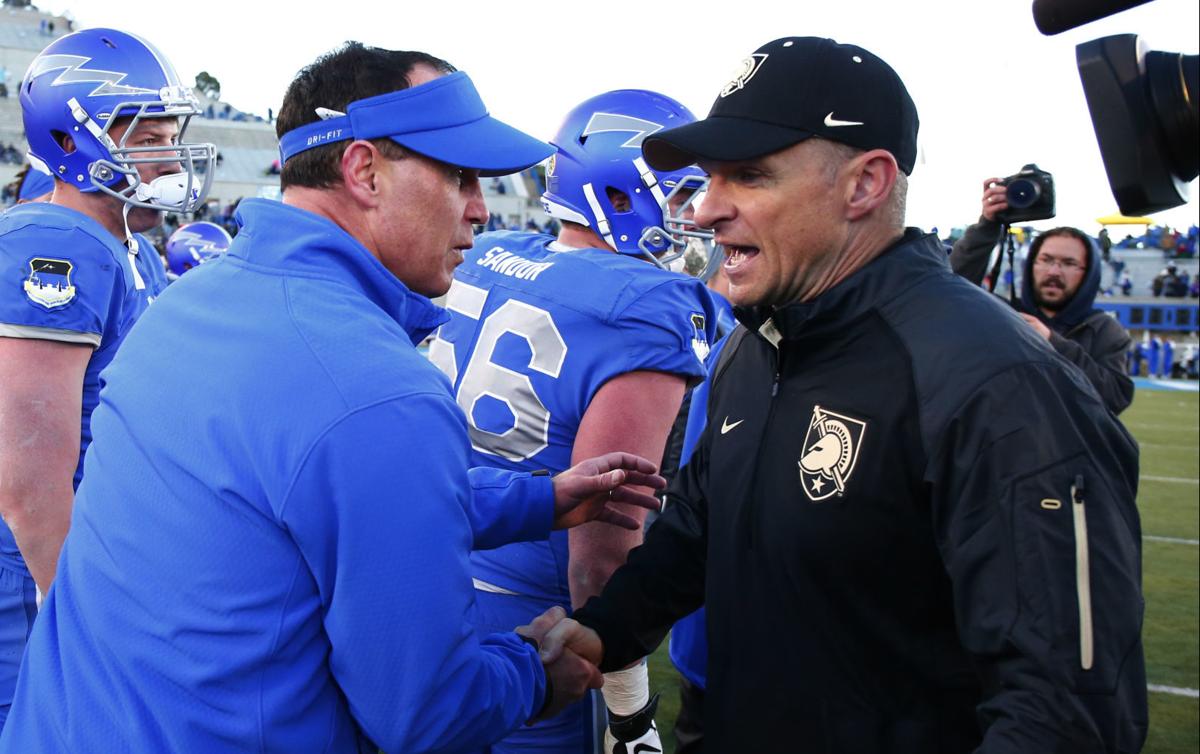 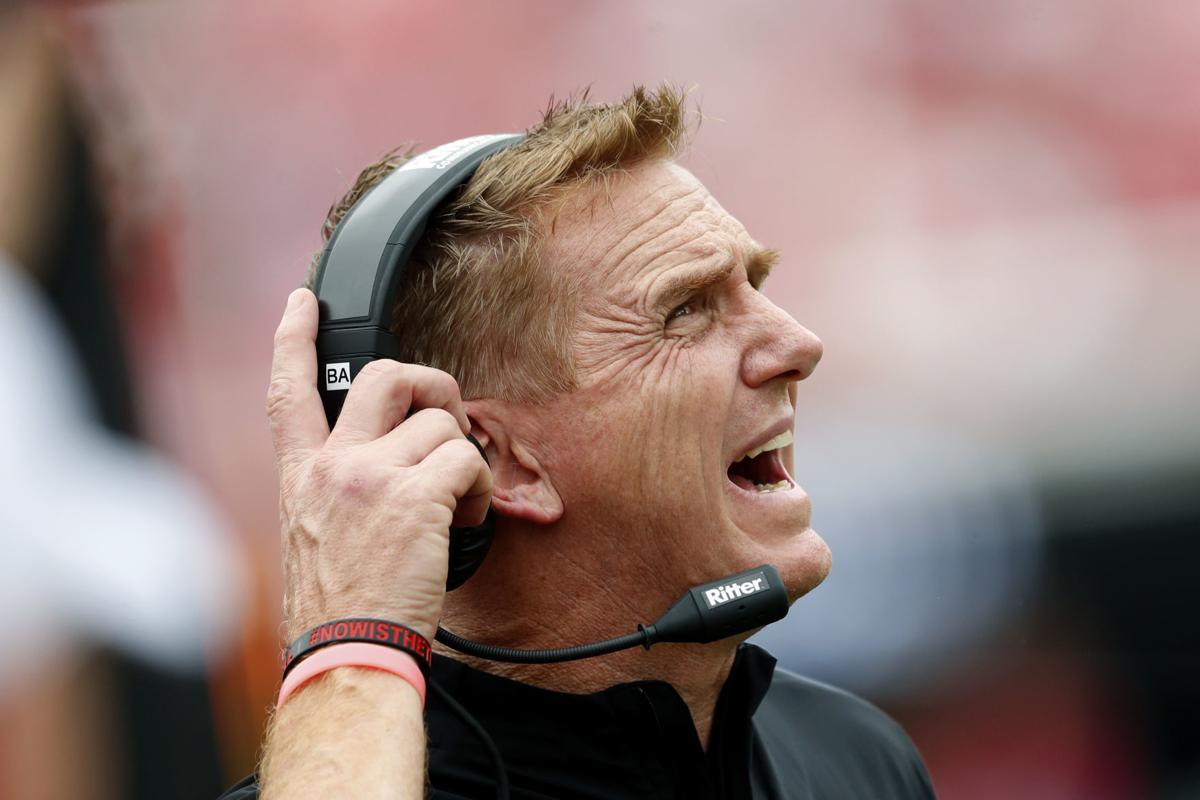 COLUMBIA, Mo. — Any college football coach who captures multiple national coach of the year awards and wins a school-record 11 games in one season would seem like a natural candidate for another job at a Power Five school.

Why, then, is Jeff Monken still the head coach at the U.S. Military Academy after his milestone 2018 season?

When it comes to Monken and his fellow highly successful peers at the other service academy schools, a few questions might give Power Five programs pause:

• They traditionally run versions of the triple-option offense, a system rarely seen this century in the major conferences.

• They recruit a different caliber of high school athlete with a completely different sales pitch.

“It’s more difficult to recruit because when you go into a home visit as a coach you’re not spending an hour there,” former Army coach Todd Berry said. “You’re spending three hours trying to explain what the Academy is about and what the military is about.”

From a football sense, can success at West Point or the Naval Academy or Air Force translate at a Power Five program like Missouri? MU athletics director Jim Sterk figures to be asking that question this week.

Monken, Army’s coach since 2014, has been linked to the Mizzou job since it became open Saturday. Monken would likely be interested in the position, a source close to the 52-year-old coach said this week. Air Force’s Troy Calhoun is another potential target. Outside of the service academy options, Mizzou has talked with Arkansas State’s Blake Anderson twice this week, a source confirmed Wednesday. Tulane’s Willie Fritz, Central Michigan’s Jim McElwain, among others, have been linked to the search, too.

Any talk of Mizzou hiring a coach from Army or Air Force leads to questions about offensive philosophy. The triple option goes against the grain in the Power Five, though for years, Georgia Tech was the exception, running the system under former coach Paul Johnson, who guided the Yellow Jackets to nine bowls in 11 seasons with two years of double-digit wins. Monken is a Johnson disciple. The Peoria, Ill., native first worked under Johnson at Hawaii in the 1980s then served under him at Georgia Southern, Navy and Georgia Tech. Monken took over as head coach at Georgia Southern, where he built an FCS powerhouse running the flexbone offense, highlighted by a 2013 upset at Florida.

From there, Monken landed the Army job for the 2014 season. The Black Knights were in a bad place for more than a decade, with just one wining season between 1997-2013.

After going just 6-18 his first two seasons, Monken found some traction in year three. That’s when Army re-established itself as one of the nation’s elite rushing teams and the Black Knights finally beat a Power Five team (Wake Forest) and rival Navy.

Last year’s 11-win season was full of highlights. After losing its opener to Duke, Army outplayed Oklahoma for stretches but lost in overtime. The Knights won their next nine games, including a 70-14 thrashing of Houston in the Armed Forces Bowl. Against the mighty Sooners of the Big 12, Army dominated the clock, running 87 plays to OU’s 40.

“They’ve got several Parade All-Americans,” Monken said at the time, “and as Paul Johnson used to say, we have several guys who have marched in a parade.”

This season, Army had Michigan on the ropes in Ann Arbor, Mich., but has slipped back to 5-7 with four of those losses by a touchdown or less.

With the early signing period starting Dec. 18, should Sterk be serious about Monken, Mizzou probably can’t wait until the Dec. 14 Army-Navy game for a decision.

Then there’s Calhoun. At Air Force since 2007, Calhoun, 53, mixes in other spread and pro-style elements to his option-based attack. Unlike Monken, he’s coached outside the scope of the triple option, including two years on NFL staffs in Denver and Houston. After two straight five-win seasons, the Falcons have recovered this year at 10-2, Calhoun’s 10th bowl-eligible season in 13 years.

Could Calhoun or Monken thrive elsewhere? You have to go back to Paul Dietzel in 1965 as the last Army coach who landed a head-coaching job at a current Power Five school after leaving West Point. He went from Army to South Carolina. Berry was fired midway through his fourth season at Army, took on a few assistant jobs and later became the head coach at Louisiana-Monroe. At Navy, Johnson went from Annapolis to Georgia Tech. Charlie Weatherbie resurfaced at Louisiana-Monroe and George Welsh parlayed his success at Navy into a long head-coaching career at Virginia.

Berry, now the executive director of the America Football Coaches Association, believes a service academy coach can run an option-based offense at a Power Five program, but in the age of prolific spread offenses, other concerns might keep ADs from turning their team over to Monken, Calhoun or Navy’s Ken Niumatalolo.

“I’m in the room with athletics directors and conference commissioners and when you hear conversations from that group the question isn’t whether you can win but whether your fan base is going to feel like they’re entertained,” said Berry, Army’s coach from 2000-03. “At the academies, the whole value of winning is at a premium. They put value over being entertained. That’s just the nature of their mindset.”

Then there’s the recruiting aspect. An option-based Power Five team wouldn’t have need for the four and five-star pocket passers and wide receivers emerging at the high school level. The same goes for offensive linemen. The service academies thrive with smaller, agile, cut-blocking linemen, the kind who gave Oklahoma and Michigan fits the last two years.

“Certainly there’s a lot of high schools out there still running option,” Berry said. “It’s not like there aren’t choices out there. You’re looking for a differential advantage on the field, but you’re looking for them in recruiting also. Some of those option quarterbacks who aren’t being heavily recruited at the FBS level, when you’ve got a guy who’s a tremendous athlete as an option quarterback, you’re not competing with anybody for them other than maybe if they’ll play another position.”

But it’s one thing for Army, Navy or Air Force to ambush one or two bigger, stronger Power Five rosters every season. Could an unconventional roster of undersized, unheralded recruits hold up against a full Southeastern Conference schedule? Is there another program bold enough to become the next Georgia Tech? Can a similar system thrive in the SEC?

Those are the question Power Five ADs have to ask themselves, including, perhaps, Mizzou’s Sterk.

Mizzou coaching search: Who is Will Healy?

Mizzou coaching search: Board not thrilled with some targets

With Arkansas State's Blake Anderson in MU's crosshairs, sources confirm UM System Board of Curators have reservations about some options for the position.