Best of the SEC: Georgia-Clemson headlines this season's top nonconference showdowns
0 comments
Share this
{{featured_button_text}}
1 of 2 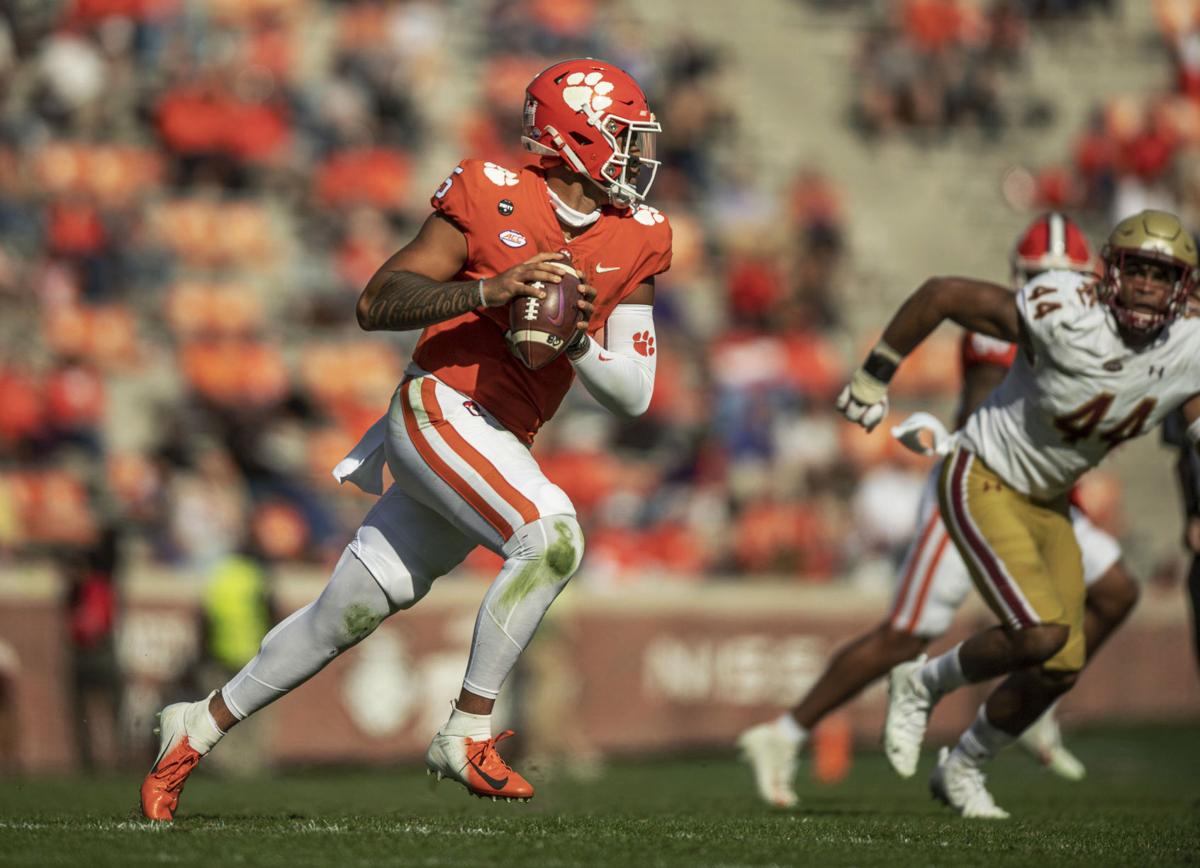 Clemson quarterback D.J. Uiagalelei runs during the first half of a  game against Boston College on Saturday, Oct. 31, 2020, in Clemson, S.C. (Josh Morgan/Pool Photo via AP) 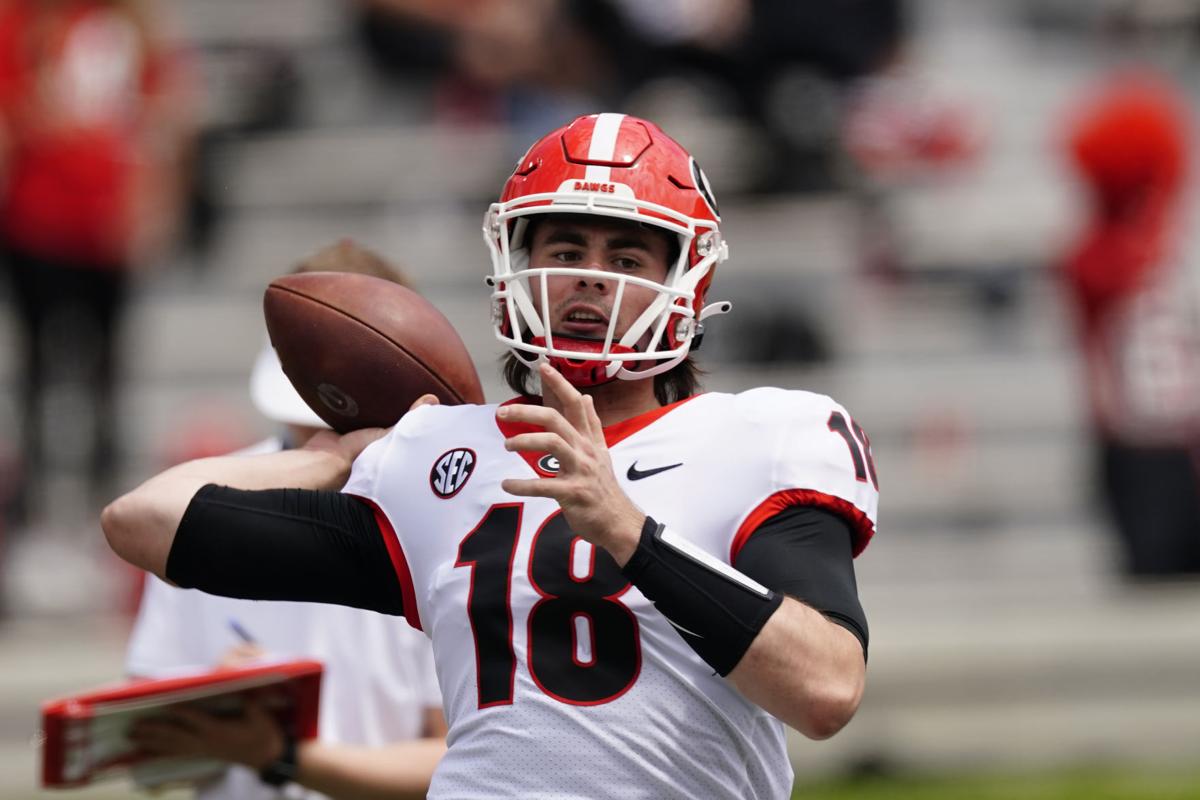 Wednesday is the final day of June, which means one thing in the Southeastern Conference: It is one day closer to the football season.

While SEC teams plan to welcome back full-capacity crowds this year, they’ll also welcome back nonconference games. The pandemic forced the SEC to call an audible last August and switch to 10-game conference-only schedules. But it’s back to normal this fall, with all 14 teams playing four games outside of league play, some more challenging than others.

In the first of several SEC countdown lists to preview the upcoming season, here’s the Post-Dispatch’s picks for the SEC’s best nonconference games for 2021.

1. Georgia vs. Clemson Sept. 4 (Charlotte)This clash of superpowers rekindles an old rivalry between schools separated by just 70 miles. Georgia trails Clemson in College Football Playoff appearances six to one, but both programs are stocked with four- and five-star recruits and begin each season with a “playoffs or bust” ethos.

Both feature loaded defenses and quarterbacks who will kick off the season with strong Heisman Trophy odds: Clemson’s D.J. Uiagalelei (6-1) and Georgia’s J.T. Daniels (10-1).

Clemson opens as an early 3-point favorite in what should be the most anticipated nonconference game on the entire national calendar.

2. Mississippi vs. Liberty Nov. 6This is not a misprint. The Hugh Freeze Bowl promises to be one of the country’s most entertaining games this fall.

If you like offense, circle the date now. Lane Kiffin’s Ole Miss Rebels return rubber-armed quarterback Matt Corral, who threw for 3,337 yards in 10 games last year for a team that also led the SEC in rushing. Liberty’s Malik Willis is one of the game’s most electric dual-threat QBs — he accounted for 34 touchdowns in 10 games — for another high-voltage offense.

But the star of the show will be Freeze, who’s won 18 games in two years at Liberty since his sudden and hardly graceful departure from Mississippi. His Oxford homecoming might transcend the Egg Bowl as the biggest game in the Magnolia State this fall.

Sept. 4 (Atlanta)In what’s billed as the Chick-fil-A Kickoff Game, the Crimson Tide and Hurricanes meet for the first time since the 1993 Sugar Bowl, when Gene Stallings’ Alabama team snapped the Canes’ 29-game winning streak to capture the national championship, the Tide’s first since the Bear Bryant years.

Miami could be an Atlantic Coast Conference contender this fall. But despite losing 10 players to the NFL draft, Alabama is an early 17-point favorite.

Sept. 11The Razorbacks and Longhorns revive a once-great rivalry, playing for just the fourth time in the regular season since their days in the Southwest Conference. They sure love second-year Head Hog Sam Pittman in Fayetteville, and if he beats the Horns and new coach Steve Sarkisian, Pittman will get his own state holiday.

Sept. 18Both programs are coming off disappointing 2020s by their lofty standards. This looms as a crucial early test for new Auburn coach Bryan Harsin, an SEC outsider who proved at Boise State he can win big outside of the Power Five. An upset in Happy Valley will signal the Tigers are ready to compete in the SEC West faster than most figure.

Sept. 4Coach Ed Orgeron needs a bounce-back season in Baton Rouge. Chip Kelly begins his fourth year at UCLA looking for his first winning record. Louisiana State underachieved last year, but that’s been a fall tradition at UCLA for nearly a decade. Something’s got to give in this Week 1 matchup. LSU is an early 3½-point favorite.

Sept. 11Coach Mike Leach’s rookie season in Starkville started hot, fizzled in the middle then ended on a high note. The Bulldogs should be better equipped to make noise in Leach’s second voyage. The Wolf Pack were two narrow losses from being 10-2 and could be a surprise team in the ACC.

Nov. 27What used to be a prime in-state showdown has lost its sizzle lately. The last five meetings have been decided by an average margin of 22 points, with the Gators outscoring the Seminoles in the last two games 81-31.

Sept. 11 (Denver)These two never crossed paths in the Big 12 championship game during the 15 years they shared in the conference and now meet as members of the SEC and Pac-12, respectively. The Aggies, 9-1 last year, are built to challenge Alabama in the SEC West but will have to survive this test at Empower Field at Mile High, home of the Denver Broncos

Others to watch• Ole Miss vs. Louisville, Sept. 6 (Atlanta)

Starting Thursday, athletes at Mizzou and beyond can cash in for commercial and promotional purposes.

Clemson quarterback D.J. Uiagalelei runs during the first half of a  game against Boston College on Saturday, Oct. 31, 2020, in Clemson, S.C. (Josh Morgan/Pool Photo via AP)