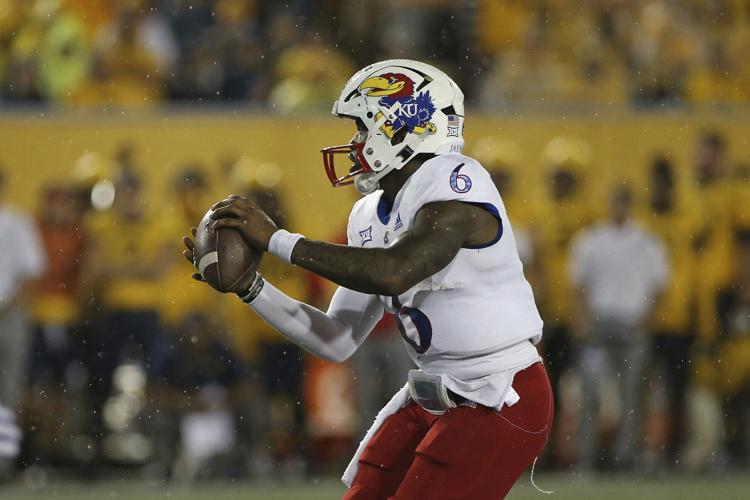 Kansas quarterback Jalon Daniels maneuvers against West Virginia on Sept. 10, 2022, when the visiting Jayhawks won by 13 points despite being a two-touchdown underdog. 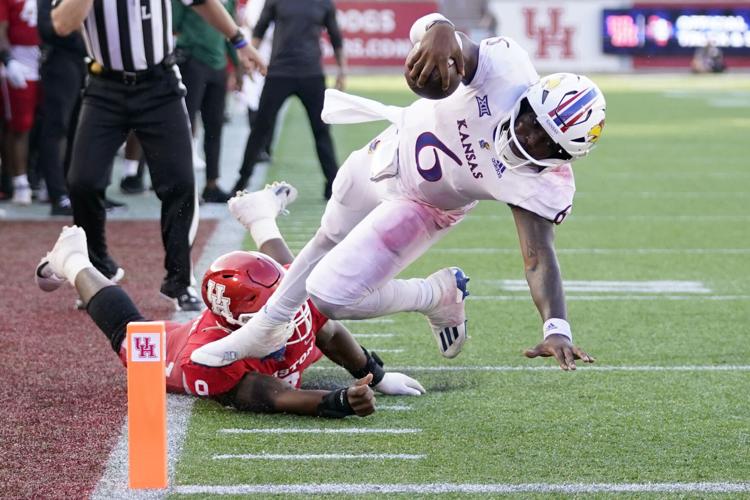 Kansas quarterback Jalon Daniels leaps over Houston defensive lineman Nelson Ceaser to score a touchdown in a game on Sept. 17, 2022, in Houston.

Sure, those are big-name programs that populate the top tier of this week’s national rankings. But from a betting standpoint, try to top Kansas. Yeah, Kansas. And we’re talking football, not basketball.

The Jayhawks, who not that long ago were the ‘”Jokehawks” of the collegiate gridiron, are 3-0 not only on the field but also against the point spread. They have won twice as an underdog, both times against teams favored by more than a touchdown and the other time as a big favorite vs. second-tier Tennessee Tech.

Sure, there are other teams that are perfect so far against the spread — but how many have done what KU has accomplished? The Jayhawks already have exceeded their over/under win total for the season, which generally was 2 or 2½ depending on the sportsbook. They have road wins against West Virginia and Houston.

This from a team that had a record 46-game road losing streak that stretched from Sept. 2009-Sept. 2018. Before this season, KU had gone 23-118 since 2010, never winning more than three games in a season. This year the Hawkers are averaging 53 points per game, third in FBS, and 7.55 yards per play, No. 9, under the guidance of second-year coach Lance Leipold. He previously built a powerhouse at Division III Wisconsin Whitewater before moving up to Buffalo and helping energize that program.

How good have the Jayhawks been from a betting standpoint? Two weeks ago, they were a 14-point underdog at West Virginia but won by 13. Last week they were nine-point ‘dogs at Houston and won by 18.

Taking it another step: Starting with a $100 bet on the Tennessee Tech contest and letting it ride on the next two games would have the bettor ahead $2,028.31.

In Oklahoma City, heart of Big 12 country, the Jayhawks are No. 1 this week in Berry Tramel’s power ratings for the conference. He writes for the Oklahoman newspaper.

“The Jayhawks have two wins, both on the road, better than any victory on the (Oklahoma) Sooner résumé,” he wrote, but with a caveat.

“That’s not a prediction,” he said. “I don’t think you’ll find the Jayhawks in (the league title game) this season. ... Remember, I rank teams on what they’ve done. Not what I think they will do.”

The Jayhawks are out of the underdog role for their game Saturday, at home against Duke. They’re favored by 7 or 7½ points, depending on the book. The game is sold out and will be just KU’s second home full house in 13 seasons.

It’s the battle of the Tigers on Saturday in Alabama, as Missouri‘s football striped cats play Auburn‘s version of the animal. And after some early betting action on the home team, the spread has remained steady all week at the St. Louis area sportsbooks.

DraftKings (East St. Louis) and FanDuel (Collinsville) had Auburn as a 6½-point choice shortly after the opening lines were posted Sunday, but by early evening the line had risen to 7 at DraftKings and 7½ at FanDuel. Argosy (Alton) posted a line later in the day, at 7½.

Reports this week that Auburn will be down to its third-string quarterback have had little impact on the spread for a game matching two far-from-impressive teams. As of Friday afternoon, Auburn was a 7-point choice at DraftKings and Argosy, 7½ at FanDuel.

Do you hate it, too, when announcers talk about a player “struggling” or having “a tough time” when going through a really bad stretch? No sugar coating it here — the picks in this section have been nothing short of lousy through two weeks. Maybe “putrid” sums it up better.

Good, bad or otherwise, we will be transparent here about the results, and last week, we were 0-4 to fall to 1-7 for the season and are down 12 units overall. That’s based on our ranking of selections (they can range from one • to five •••••).

For the second week in a row, a QB injury affected a college pick, as Fresno State pro-prospect Jake Haener left the Bulldogs’ game against Southern Cal early in the second half because of an ankle sprain. That helped the over/under stay below 72 points.

In the pros, we had the Ravens -3½ points and they led the Dolphins by three TDs in the fourth quarter before the defense decided to take the rest of the game off. Not only did Baltimore fail to cover the spread, it lost the game.

But as they say, “them’s the breaks.” The only thing in betting that matters is the final outcome, not the path there.

We’ll take it easy this week (odds are the most favorable that were available Friday afternoon among the three area sportsbooks):

Florida at Tennessee, 2:30 p.m. Saturday: The Volunteers unleash their fast-paced attack, which snaps the ball in an average of just over 20 seconds per play, against a team that will be on the road for the first time this season. Tenny will be motivated to pay back a beatdown last year in the Swamp and roll up points. Tennessee team total over 36.5 points (Argosy, DraftKings). ••

Bengals at Jets, noon Sunday: It’s time for Cincy to wake up from its Super Bowl-losing hangover, and this is the spot for the Bengals’ first win of the season. Jets coming off a miracle win. Not this time. Bengals -6 (all three books) •

Upcoming NFL games scheduled to be televised in St. Louis:

With a chance to pull off biggest upset in team history, Tigers stumble in fourth quarter, fall to Bulldogs 26-22.

How to watch Mizzou vs. Georgia Bulldogs football on TV, live stream plus game time

How to watch Missouri vs. UGA Bulldogs football on TV and online live stream plus game time on Saturday, Oct. 1, 2022.

Freshman receiver suffered an injury at Auburn, will be evaluated throughout the week.

The UGA Bulldogs football team took their first lead in the final five minutes and hung on for victory over Missouri.

Members of the Missouri and Georgia football teams got in a scuffle during pregame warmups on Saturday, Oct. 1, 2022.

In the wake of Saturday's overtime loss at Auburn, SEC Network morning show changes plans, headed to Ole Miss instead of Mizzou.

Kansas quarterback Jalon Daniels maneuvers against West Virginia on Sept. 10, 2022, when the visiting Jayhawks won by 13 points despite being a two-touchdown underdog.

Kansas quarterback Jalon Daniels leaps over Houston defensive lineman Nelson Ceaser to score a touchdown in a game on Sept. 17, 2022, in Houston.