Chaminade's Brady Cook driven to prove to St. Louis that he belongs at Mizzou
0 comments
Share this
{{featured_button_text}}
1 of 2 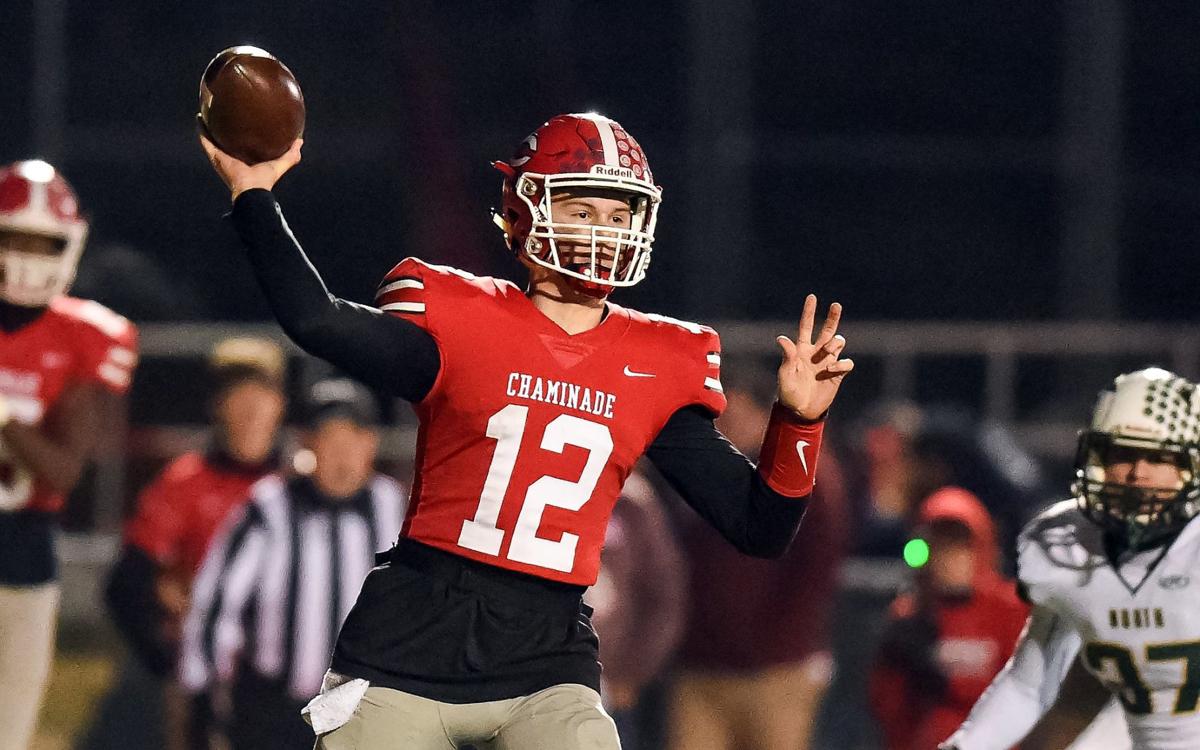 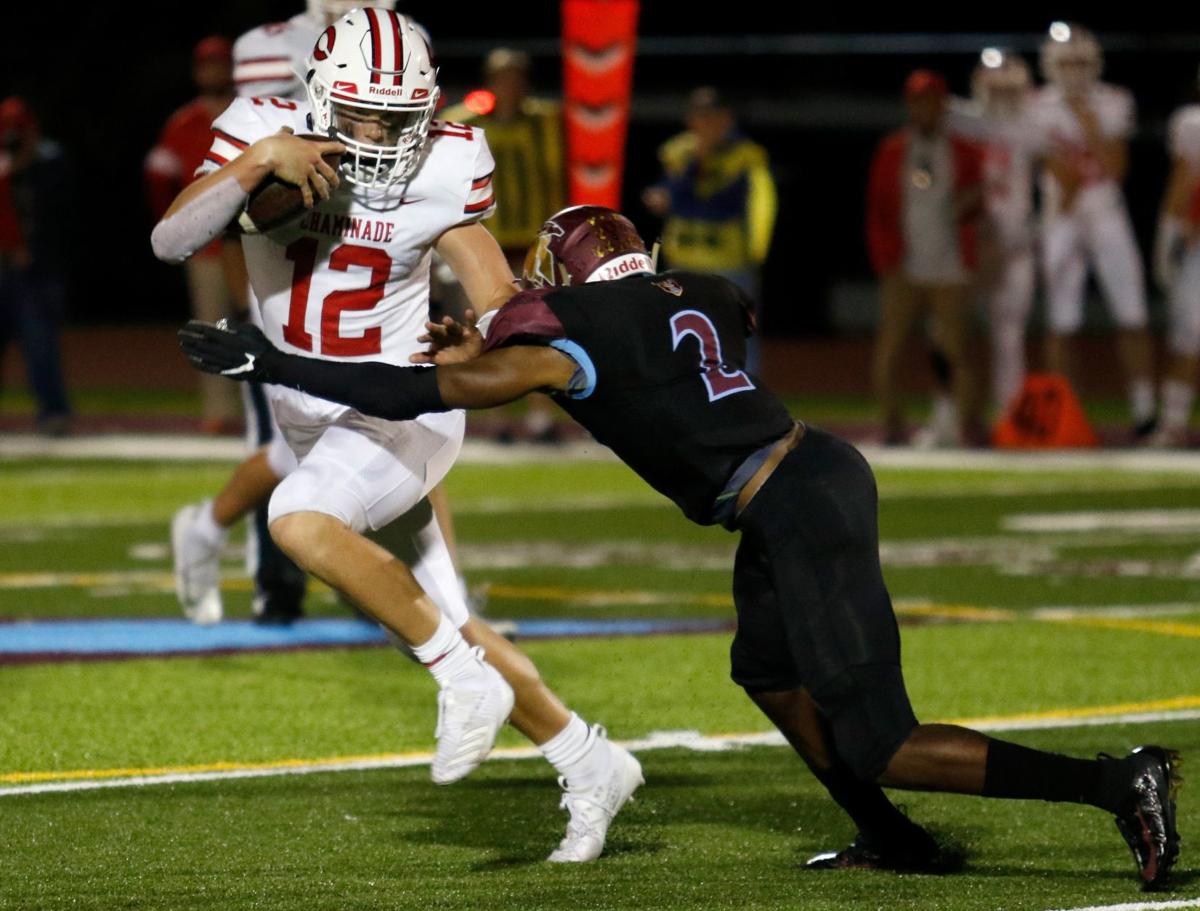 Before he took a snap his junior season at Chaminade Prep, quarterback Brady Cook already had convinced Missouri’s coaching staff he was worthy of a scholarship offer.

Had he convinced the rest of St. Louis he was that good?

As a sophomore, Cook threw for 1,361 yards and 13 touchdowns, with eight interceptions. When the 2018 season kicked off, several schools had shown interest in Cook. Missouri was the first Power Five program to offer a scholarship and he gave the Tigers a verbal pledge in September, becoming the first commitment for Mizzou’s 2020 class. Then came a solid but short of spectacular junior season: He threw for 1,795 yards and 14 TDs, with a dozen interceptions.

“He got to the point where he realized, ‘This is my show. I’m gong to write my own story here,’” said Matt Biermann, a quarterback trainer at St. Louis-based Elite Football Academy who has worked with Cook since he was in second grade. “He’s very dedicated. He took the offseason extremely serious. He wanted to prove that he is the guy.”

In the offseason, Cook strengthened his back and shoulder muscles so he could unload passes with a quicker release. He rebuilt his throwing mechanics with focus on firing his hips. He lowered his arm’s release point. He buried himself in Chaminade’s playbook, heavy on run-pass option plays, post patterns and drag routes. He was poised for a breakout senior year.

It was late August, shortly before the start of the season. It came from the Cardinal Ritter football team’s since-deleted account. The tweet listed Cook’s high school stats along with superior numbers by Mekhi Hagans, the Cardinal Ritter quarterback — a highly unusual approach for one school to mention another team’s player by name.

The tweet read, “No matter what happens in Mekhi’s senior year, we are advocating for his body of work because the facts is what should speak but apparently not. Last but not least if these stats were flipped there would be no comparison.”

(Unrelated to the tweet, Cardinal Ritter coach Brandon Gregory was fired in October for using an ineligible player in the Lions’ first game.)

“Coach B.G. and Cardinal Ritter, they’ve always been pretty salty toward me,” Cook said this week. “Over the past couple of years I’ve been numb to things like that as far as blatantly, outright saying things about me on Twitter and social media. I was not surprised at all. Mekhi is a great player and they love to advocate for him. I understood, but I didn’t think it was the right thing to do.”

As if Cook needed any more motivation heading into this senior season, the tweet did it for him. He kept a screen shot on his phone.

“It was definitely motivation because I didn’t have anything to back it up at that point after my junior season,” he said. “I was excited to get on the field and show them what I’m all about.”

On the field this fall, Cook more than validated Mizzou’s interest. He threw for 3,194 yards and 33 touchdowns while cutting his interceptions to seven. He became a running threat, too, totaling 375 rushing yards. The three-time team captain continued to excel as one of the state’s best punters, averaging 48.4 yards per kick.

He earned first-team All-Metro Catholic Conference honors at quarterback and punter, first-team Class 5 All-State honors as a punter from the coaches association and second-team honors in the state’s all-purpose category.

“Brady is a 4.0 (grade-point-average) student and that really showed on the field,” Chaminade coach Antoine Torrey said. “Every year he grew and developed. We threw a lot at him this year. We run a complex system, a no-huddle offense, and he really grew from his junior year to senior year.”

On Wednesday, Cook will be one of several St. Louis area players expected to sign with Missouri, the first day of the 72-hour early signing period.

The last week has been a whirlwind for new Mizzou coach Eliah Drinkwitz to salvage what’s left of the commitments former coach Barry Odom collected. Cook was one of a dozen or so 2020 commitments in Columbia last weekend on official visits to meet Drinkwitz, who is expected to collect signatures from most of those recruits starting Wednesday. The group includes Kirkwood receiver Jay Maclin, Francis Howell offensive lineman Drake Heismeyer, Mehlville offensive lineman Mitchell Walters and, possibly, East St. Louis defensive end Kevon Billingsley.

Others expected to sign this week include Columbia Rock Bridge linebacker Will Norris; Elijah Young, a running back from Knoxville, Tenn.; Winter Garden, Fla., defensive backs Jaylon Carlies and Tyler Jones; Dominique Johnson, a running back from Crowley, Texas; and Harrison Mevis, a kicker from Warsaw, Ind.

Mizzou is still in the running for Javian Hester, a four-star wideout from Tulsa, Okla., who has considered other options since Odom was fired.

The same goes for Memphis, Tenn., offensive lineman Ray Curry, who visited both Missouri and Arkansas this weekend, on the heels of Arkansas both Odom and his Mizzou O-line coach, Brad Davis.

Odom’s staff missed on most of the state’s top-rated recruits — eight of the top nine in-state players, as ranked by 247Sports.com, are committed elsewhere — and Drinkwitz will have to supplement this week’s haul with more recruits on the traditional signing date on Feb. 5.

In Brady, the Tigers are getting a recruit who never wavered, even when his phone started buzzing after Odom was fired. Three Power Five schools have reached out to Cook to gauge his interest since MU’s head-coaching change: Kansas, Kentucky and . . . Arkansas. Yes, Odom checked in on his former QB pledge. Cook politely declined their interest.

“I’m going to miss (Odom),” he said. “The good thing is I’ll be shaking his hand next year after the game.”

Instead, Cook has spent time getting to know Drinkwitz and his “pro-tempo” spread offense. Cook plans to enroll at Mizzou next month and take part in spring practices. Sitting in his next coach’s office last weekend, Cook asked Drinkwitz if he planned to hire a quarterbacks coach.

“He basically told me I’m going to be working with him the most,” Cook said. “I’m going to be breaking down film with him. He’s going to be calling most of the plays, so that’s really exciting for me, getting to work with the head coach. That’s comforting.”

As Drinkwitz scrambles to put together his first recruiting class, there’s one piece he knows will be in place.

“There’s been several coaches that have visited and asked how solid he was with his commitment,” Torrey said. “He’s always wanted to be at Mizzou. When he first got to Chaminade his goal was to play in Columbia.”

Mizzou Signing Day: Drinkwitz keeps together most of MU's class

New Tigers coach made the rounds in St. Louis on Thursday, shoring up MU's 2020 class. He'll eventually have to tackle NCAA restrictions, but Drinkwitz plans to swarm the state with recruiters.