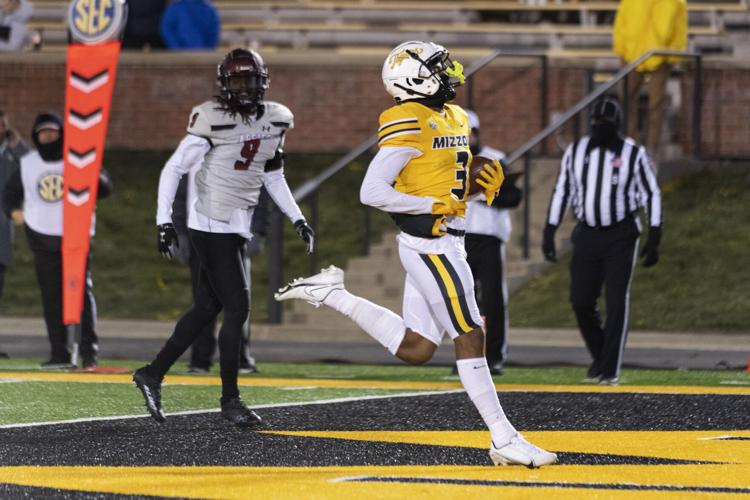 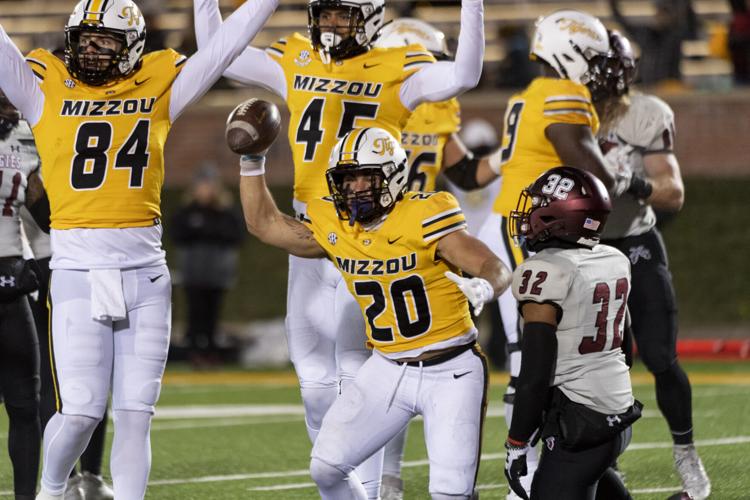 Missouri's Cody Schrader (20) celebrates after scoring on a 5-yard run in the third quarter of the Tigers' 45-15 victory over New Mexico State on Saturday, Nov. 19, 2022, in Columbia, Mo.

COLUMBIA, Mo. — Luther Burden III will be the first to admit his freshman season hasn’t always gone as expected. Then again, when you’re nicknamed “Touchdown Luther” and your focus every time you touch the ball is one singular thought — “End zone,” he said earlier this season — fulfilling the five-star hype might have been an impossible task.

But 11 games into Missouri’s football season, the Tigers have started to resolve two issues with one solution.

How do you fix a crummy red-zone offense? Get Burden the ball.

How do you get Burden more involved in the offense? Target him in the red zone.

That’s exactly what the Tigers did Saturday night to build an early lead against overmatched New Mexico State in a 45-14 victory. On a frigid night at Memorial Stadium, when the spotlight shined on a different Mizzou freshman, Burden turned two short red-zone passes into touchdowns, giving him eight scores on the season as a rusher, receiver and punt returner.

“I actually feel like I could have done better (this season), but eight touchdowns is cool,” Burden said after the win. “I’ll take that.”

With a spotty, shivering announced crowd of 45,231 on hand, Saturday’s victory snapped MU's two-game losing streak and, at least for one night, uncovered a remedy for the Southeastern Conference’s least effective red-zone offense.

Mizzou came into the weekend with the league’s worst touchdown percentage on possessions when the offense reaches the red zone, scoring TDs just 54.3% of the time — the lowest rate in coach Eli Drinkwitz’s three seasons at Mizzou. Only 10 Power Five teams kicked off Saturday with a worse percentage, including some of the country’s most decrepit offensive teams, such as Rutgers, Indiana, Colorado and Iowa.

But on Saturday, the Tigers punctured New Mexico State’s 20-yard line four times and scored touchdowns on all four visits.

Mizzou’s lengthy first series ended with the ball in Burden’s hands and Burden in the end zone. From the 12-yard line, the Tigers set up a screen pass for Burden on the far side of the field as a fleet of offensive linemen, wideout Tauskie Dove and tailback Cody Schrader charged toward the hash marks looking for bodies to block. But Burden made his own alley down the sideline, hurdled over right tackle Armand Membou and the pylon for the touchdown.

“He’s just got a knack with the ball in his hands to make some plays,” Drinkwitz said. “I don’t think we even blocked them up exactly the way we were supposed to. When he gets his shoulders going downhill he’s really tough to tackle.”

The Aggies (4-6) got another taste in the third quarter. With the Tigers ahead 28-7, Brady Cook converted a third-down pass to Barrett Banister to again set up shop in the red zone. This time, from the New Mexico 14, Burden crossed behind the offensive line at the snap, snagged a short underhand toss from Cook and raced behind Dove’s downfield block for another touchdown reception.

It was Cook’s shortest pass of the game but part of a 251-yard, three-touchdown night for the quarterback. Mizzou opened last week's game at Tennessee with a screen pass to Burden in the red zone that went for a touchdown.

“Get him the ball and let him do his thing,” Cook said. “He had some great blocks on the perimeter. Obviously when you get Luther the ball he can do stuff that makes you say, ‘Whoa.’”

Earlier in the quarter, Burden caught a 12-yard pass that put the Tigers back in the red zone, setting up Cody Schrader’s second touchdown run two plays later. Burden also had three carries on designed runs for 12 yards.

Much was made of Burden’s meager production early in the season. But heading into Mizzou’s regular-season finale, he continues to find ways to boost a limited offense that struggles to sustain drives and deliver explosive plays. The rookie from St. Louis has 36 catches for 299 yards and five touchdowns, 91 rushing yards and two more scores plus a punt return TD. His eight touchdowns are the most for a Mizzou true freshman since running back Damarea Crockett’s 10 in 2016.

As Burden's recovered from a midseason ankle injury, he’s seen his snaps increase in recent weeks. Why?

Mizzou fans have waited for Drinkwitz to break the seal on another freshman, and those who stuck around in the fourth quarter Saturday got their first glimpse.

With 12:08 left, backup quarterback Sam Horn made his college debut with a handoff to fellow four-star freshman Tavorus Jones. On the same series, Horn’s only series, an offensive-line penalty wiped out Horn’s only completion — a 29-yard bullet to Banister to the goal line — and his final pass got Banister hammered by a defender from behind.

The senior receiver posted a career-high 91 yards on seven catches but needed help to the sideline after apparently suffering a leg injury.

“I just told him, ‘Hey, make sure you catch the snap first,’” Cook said. “‘You're gonna be fine. Go out and ball like you always do.’”

By then, Drinkwitz had emptied his bench, replacing his established players with veteran backups, underclassmen and walk-ons — a rare luxury in a season that’s seen the Tigers play five one-possession games in conference play.

That doesn’t mean Drinkwitz was thrilled with all his reserves.

“I thought some of those guys handled it really well,” he said. “I thought some of them didn’t, to be honest. I think there’s some guys out there who didn’t take advantage of the opportunity the way they needed to do. They’re going to look back when we point out on tape maybe they were huddling back next to the heaters too much instead of having their minds set on the game.”

Mizzou’s comfortable lead afforded Burden the chance to spend the fourth quarter keeping warm by the heaters. After the game, Mizzou’s seniors took part in the annual senior night tradition, taking home a rock from the Rock M behind the north end zone as their teammates carried them off the field and into the locker room. Two receivers were among the 21 seniors the team honored Saturday, Banister and Dove.

This season’s not done, but the postgame scene got Burden already thinking about next year.

“It was really important to get those guys their rock,” he said. “They took me under their wing when I first got here. … Mainly just how to carry myself, just trying to put me basically in a leader role. Because when they’re gone I’ll have to step up and take control.”

A look at Mizzou vs. New Mexico State Aggies football on Saturday, Nov. 19, 2022

Here is a look at Missouri vs. New Mexico State Aggies football on Saturday, Nov. 19, 2022, in Columbia, Missouri.

Heading into Friday's regular-season finale against Arkansas, Mizzou's third-year coach made an impassioned case for the program's progress, bright future.

Tigers need a victory Friday over Arkansas to secure bowl eligibility but could still qualify under NCAA's 5-7 loophole.

Missouri's Cody Schrader (20) celebrates after scoring on a 5-yard run in the third quarter of the Tigers' 45-15 victory over New Mexico State on Saturday, Nov. 19, 2022, in Columbia, Mo.