'It's a robbery.' 31 years ago, Colorado beat Mizzou on a 5th down
0 comments
Share this
{{featured_button_text}}
Jim Thomas

Editor's note: It was a game that will live in infamy. On Oct. 6, 1990, the Colorado Buffaloes beat the Missouri Tigers 33-31 when the officials gave the Buffs an extra play - yes, a fifth down - and they used it score the winning touchdown as time expired. Here is our original coverage.

COLUMBIA, Mo. - How best to sum up Colorado's controversial 33-31 football victory Saturday over the University of Missouri?

For starters, this may be the first time in college football history that fans of the losing team tore down a goal post. Of course, Mizzou fans thought the Tigers won. Ditto for Mizzou players and coaches. And they may think so for some time. 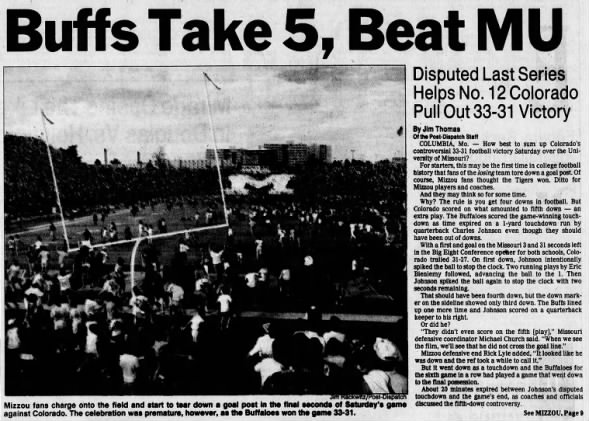 Why? The rule is you get four downs in football. But Colorado scored on what amounted to fifth down - an extra play. The Buffaloes scored the game-winning touchdown as time expired on a 1-yard touchdown run by quarterback Charles Johnson even though they should have been out of downs.

That should have been fourth down, but the down marker on the sideline showed only third down. The Buffs lined up one more time and Johnson scored on a quarterback keeper to his right.

''They didn't even score on the fifth [play], '' Missouri defensive coordinator Michael Church said. ''When we see the film, we'll see that he did not cross the goal line.''

Mizzou defensive end Rick Lyle added, ''It looked like he was down and the ref took a while to call it.''

But it went down as a touchdown and the Buffaloes for the sixth game in a row had played a game that went down to the final possession.

About 20 minutes expired between Johnson's disputed touchdown and the game's end, as coaches and officials discussed the fifth-down controversy.

Watch: Colorado wins on 5th down

Most of the Missouri team left the field, only to return and defend an extra point try. That play had to be run, because blocked extra points can be returned to the end zone for two points. Had Missouri accomplished that, the game would have ended in a 33-33 tie.

Instead of lining up for a kick, the Buffaloes lined up as if they were going for two. But Johnson simply fell on the ball and the game was over.

But the controversy was just beginning. Angry fans stormed after officials, who received a police escort to their dressing room. At least one fan and one University of Missouri police officer were injured in the wild sequence that took place near the south end zone.

Jack Watring, associate director of the University of Missouri police, said two arrests were made as a result of the mad dash by irate fans toward the officials' dressing room. Watring would not release names of those arrested or names of the injured, although he did say that none of the injuries was serious.

But what about that fifth-down play?

When asked about appealing the play, Mizzou coach Bob Stull said, ''It doesn't make any difference. If we stop them on fifth down, we win.''

Several Mizzou players were more outspoken on the subject.

''It seemed like the refs took it away from us, '' MU wide receiver Linzy Collins said.

''We can't get down on this game, because the game was taken from us, '' MU fullback Michael Jones said.

Be that as it may, 12th-ranked Colorado, the defending Big Eight champion, left Columbia at 4-1-1 overall and 1-0 in the Big Eight. The Tigers, trying to topple a ranked team for the second week in a row, are 2-3 overall and 0-1 in league play.

''There was a hell of a lot of difference between us against them this year and last year, wasn't there?'' Stull said.

The Buffaloes swamped the Tigers 49-3 last season, leading 35-0 at halftime. But from the outset Saturday, it was clear the Tigers would put up a much stiffer fight, much to the delight of a season-high crowd of 46,856 at Faurot Field.

As they did in last week's 30-9 victory over Arizona State, the Tigers went right at Colorado with their passing game. On Mizzou's first play from scrimmage, quarterback Kent Kiefer threw deep to Damon Mays. The pass fell incomplete, but that didn't stop Kiefer and the Tigers from putting it up again and again.

Kiefer threw three more times on the series, and completed all three, including a 19-yarder to Victor Bailey for a touchdown. It was Bailey's first TD at Mizzou, and he made it happen by beating Deon Figures down the left sideline then stretching out to make the catch with 11:10 left in the quarter.

The first of four Jeff Jacke extra points gave Mizzou a 7-0 lead. That lead held up until late in the first quarter, when aided by a 37-yard punt return by Dave McCloughan, the Buffaloes moved 50 yards in four plays. Bieniemy, who became Colorado's career rushing leader Saturday after gaining a career-high 217 yards, scored on a 29-yard run as the Buffaloes tied it 7-7.

That pretty much set the tone for the day. The Buffaloes used their speed and power to roll up one big play after another on the ground. The Tigers countered with the arm of Kiefer to pile up 326 yards passing.

Mizzou took a 14-7 lead on a 49-yard pass from Kiefer to Mays, who somehow caught up with a ball that seemed overthrown. But Colorado returned the favor on a 68-yard reverse by Mike Pritchard to tie the game 14-14 at halftime.

A 44-yard punt return by McCloughan resulted in a 35-yard field goal by Jim Harper that gave the Buffaloes a 17-14 lead in the third quarter. But the Tigers struck back with a 13-yard TD run by Jones, a play set up by a 48-yard pass from Kiefer to - Who else? - Mays.

So Mizzou took a 21-17 lead after three quarters, but Pritchard set the table for a wild fourth quarter with a 70-yard pass play for a TD from Johnson. Except for two series, Johnson went all the way at quarterback in place of Darian Hagan, who was slowed by a shoulder injury. Hagan, a Heisman Trophy candidate, played two series at the start of the second half but was ineffective.

''We put Hagan in to see if he could stand up, and he couldn't stand up, '' Colorado coach Bill McCartney.

As in stand up on Mizzou's Omniturf artificial surface. McCartney was extremely critical of the Omniturf, creating yet another controversy Saturday.

''The biggest story is not how the game ended, it's that field, '' McCartney said. ''That field is glass, that field was not playable.''

Colorado players may have slipped as many as a dozen times Saturday.

The teams traded fourth-quarter field goals after Pritchard's second TD. Then the Tigers scored what appeared to be the game-winner with 2:32 left when Kiefer again found Mays, this time for a 38-yard TD pass that gave MU a 31-27 lead.

Taking over on its 12 on the ensuing kickoff, Colorado proceeded to march 88 yards for the controversial game-winning score.

''First of all, I'm very proud of my teammates, '' Kiefer said. ''Second, Missouri football is back. We showed that two weeks in a row. Our dream was taken away from us.''

Fresh off beating Alabama, the Aggies visit Columbia with a dominant SEC record as road favorites.

Drinkwitz on Mizzou's loss to Texas A&M: 'The slow start doomed us'