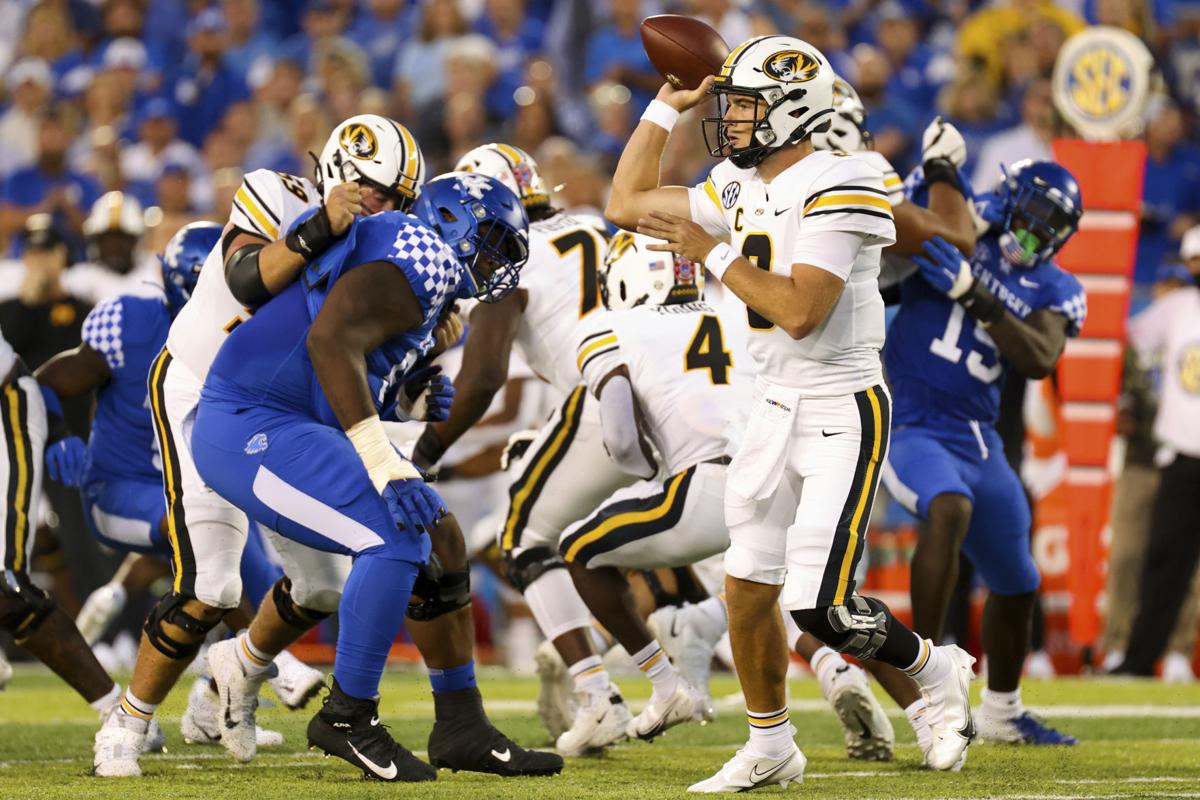 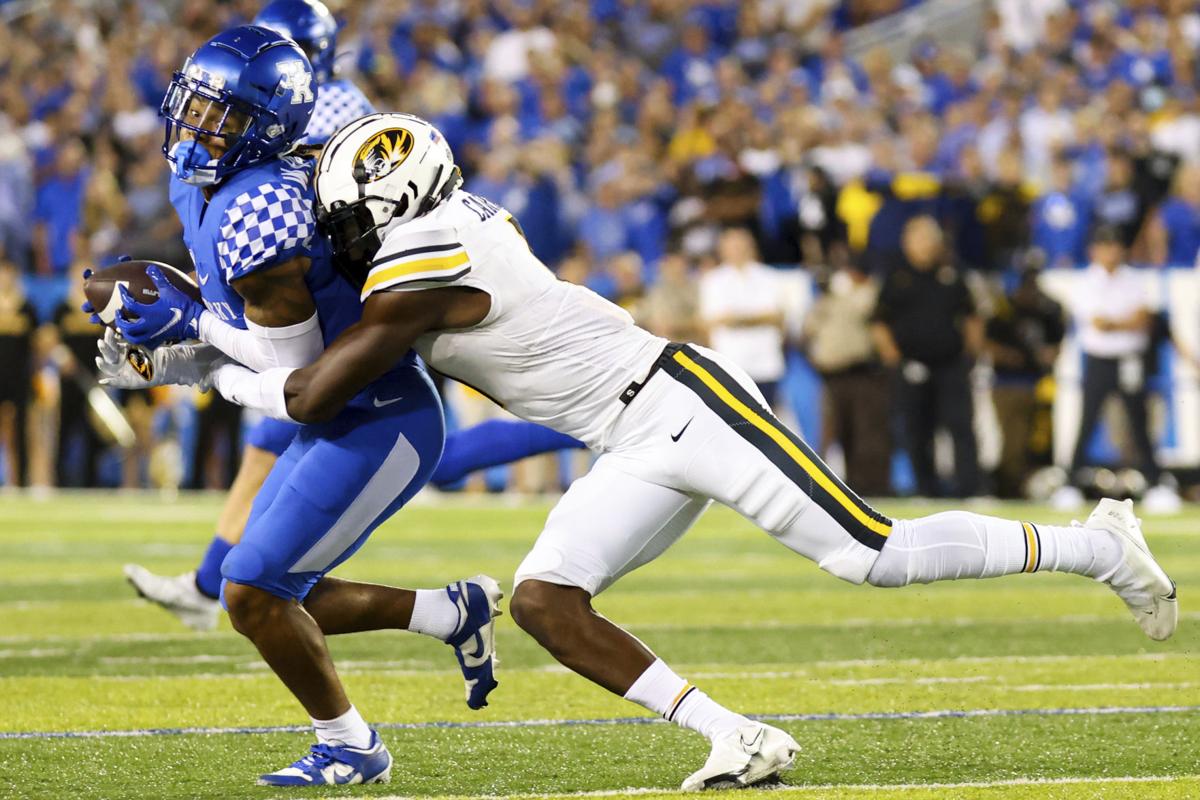 Any hope that last year’s victory over the Wildcats had moved the Tigers past UK in the Southeastern Conference East Division pecking order was put on hold Saturday night in their 35-28 loss at Kroger Field.

And it never was more obvious than along the line of scrimmage.

Like several games last year during coach Eli Drinkwitz’s debut season, the Tigers were outmuscled at the point of attack, especially on defense. And despite multiple rallies by Connor Bazelak, Tyler Badie and a resilient Mizzou offense, the defense couldn’t get out of its own way.

“We got our butt whipped up front and weren’t able to stop the run,” was all Drinkwitz could offer after his defense gave up 520 yards of offense, 341 coming on the ground. “Until I watch the film I’m not sure exactly what happened.”

Kentucky (2-0, 1-0 SEC) became the first SEC team to win a conference game this year — enjoy first place for at least a week, Wildcats! — after holding off one last Mizzou rally in the final minutes. The Tigers (1-1, 0-1) blocked a field-goal attempt to set up a final series in Kentucky territory, but the rejuvenated offense stalled for good to set off a celebration in the UK sea of blue.

Playing through some pain absorbed on a first-half tackle, Bazelak matched his career high with four touchdown passes, completing 34 of 52 throws for 294 yards. He led four TD drives of at least 75 yards each against a stout defense that specializes in limiting explosive plays.

Bazelak was slow to get up from a third-down sack on MU’s penultimate snap, then couldn’t complete his fourth-down pass for Dominic Lovett. That clinched the victory for Kentucky.

“I’m fine,” Bazelak said. “I took a little hit in the first quarter. It started nagging me in the fourth. I’ll be good for next week.”

He won’t be the only one.

For all the buzz around Kentucky’s revamped passing game, it was the rushing attack that punished the Tigers all night. Chris Rodriguez Jr. bulldozed through Mizzou’s defense for 207 yards and three scores. When UK did throw, the Tigers couldn’t cover Wan’Dale Robinson, who snagged five passes for 101 yards. Man or zone coverage, it didn’t matter much for the Tigers under first-year coordinator Steve Wilks. The Tigers forced just two punts on Kentucky’s first 10 possessions.

“We didn’t start fast. We didn’t execute early,” safety Martez Manuel said. “You look up and it’s 14-0. Offense got us back in the game multiple times. Defense didn’t step up, you know?”

The Wildcats proved from the opening series they’re still capable of running the ball down Mizzou’s throats. Robinson, a gift from Nebraska this offseason, shot out of a cannon for a 64-yard run through the teeth of Wilks’ defense and deep into Tigers’ territory. On third and goal, quarterback Will Levis and Rodriguez crossed up MU’s coverage and connected on an easy 5-yard touchdown pass. Fans were still filling out the upper corners of the stadium with UK ahead 14-0 on Rodriguez’s 2-yard touchdown run, his second of four visits to the end zone.

Mizzou broke through on its second series, scoring on a 6-yard Bazelak touchdown pass to Daniel Parker Jr. On the drive, MU got a spark from Badie, last week’s hero who was again the Tigers’ best playmaker. He was a one-man wrecking ball with 10 catches for 88 yards, plus another 61 yards on the ground.

Kentucky quickly surged back ahead by two scores with Robinson scorching the Tigers again, this time on a 49-yard catch on a Levis deep ball, finished with a diving catch just short of the end zone. Levis’ QB keeper put the Tigers in a 21-7 hole.

Just when Kentucky appeared poised to blow Mizzou out of the Commonwealth, the Tigers capitalized on a costly Wildcats gaffe. This time, Rodriguez fumbled when safety J.C. Carlies popped him short of the goal line. Linebacker Chad Bailey recovered the ball in the end zone for a touchback, giving the Tigers one last crack at points before halftime.

Bazelak delivered, driving the Tigers 80 yards in less than two minutes. He connected on six of seven passes on the series for 72 yards, zipping a 17-yard TD to Keke Chism to get the Tigers back within a score as they headed into halftime down just 21-14.

The Tigers quickly frittered away any momentum with their first turnover of the season, a Bazelak interception to linebacker Jacquez Jones on an underthrown pass for Chism.

“Our ground game wasn’t working (and on) the play-action, the backer didn’t bite on it,” Bazelak said. “He made a really nice play on it. I should have hit my checkdown like I was doing all day.”

Bazelak redeemed himself on MU’s next possession, leading the Tigers on another lengthy drive, hitting Parker on a shovel pass for their second touchdown connection.

Somehow, despite all the missteps along the way, after UK’s first three-and-out series of the game and its first punt, Mizzou took over midway through the quarter with a chance to even the score. It took a couple series, but the Tigers finally tied it up with 13:11 left on another long, methodical drive, ending with another Bazelak touchdown pass — a screen to Badie.

The Cats scratched right back with another Rodriguez TD, an 8-yard run, set up by a perfectly timed tight end screen to Justin Rigg that covered 28 yards.

The Tigers had one last gasp. With 2:07 left, linebacker Blaze Alldredge blocked what would have been a 37-yard Kentucky field goal. Kris Abrams-Draine recovered, but MU’s offense couldn’t respond, sending the Tigers home with plenty of issues to addressand a head coach trying to accentuate the positives.

“It’s one football game of 12,” Drinkwitz said. “We had an opportunity. We didn’t get it done, but there’s a lot of season left and a lot of fight left in this football team.”

A closer look at the snap counts and Pro Football Focus grades from Mizzou's 35-28 loss at Kentucky.

Mizzou notebook: Tight ends get into the action for Tigers

Hea, Parker combine for eight catches for 58 yards and two touchdowns against Kentucky.