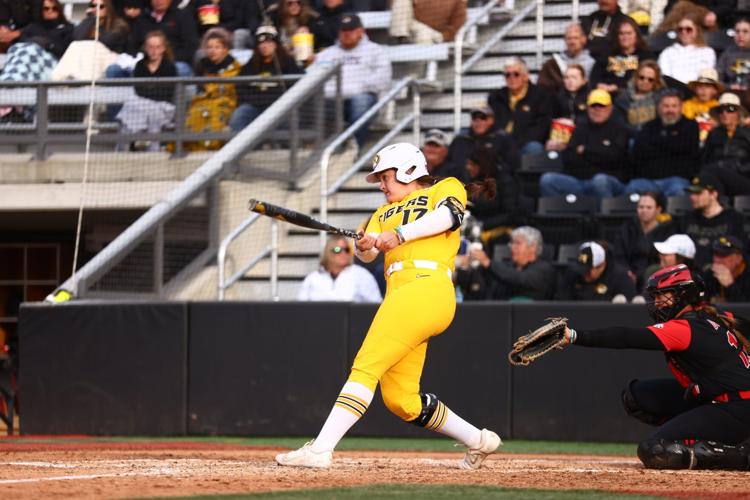 Missouri's Kim Wert bats against Georgia in a Southeastern Conference softball game on April 16 in Columbia, Missouri. Wert has set Mizzou's career home run record this season and enters the final series of the regular season with 15 homers. 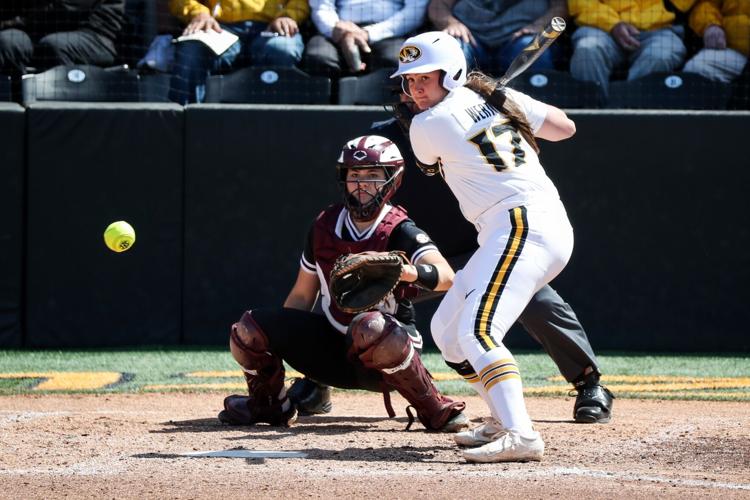 Missouri's Kim Wert bats against Texas A&M in a Southeastern Conference softball game on Sunday, May 1 in Columbia, Missouri. Wert has set Mizzou's career home run record this season and enters the final series of the regular season with 15 homers. 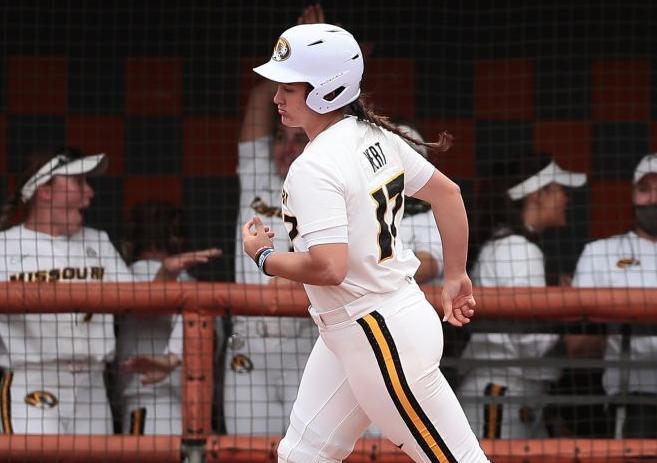 Kim Wert round the bases after hitting a home run for Mizzou's baseball team. Photo by Zach Bland/Mizzou Athletics

COLUMBIA, Mo. — The source of the Missouri softball team’s turnaround may have emerged on April 23 in an Embassy Suites hotel.

Kim Wert was struggling. Missouri’s star third baseman and designated player had seen her batting average dip by more than 30 points in less than two weeks and the team had lost all but one Southeastern Conference series before heading to Lexington, Kentucky.

But unlike many of the hotels that housed MU on the road this year, this Embassy Suites served Lucky Charms. Wert, a Virginia native, ate the toasted oat cereal “all the time” as a kid. So when she saw them as a breakfast option each morning in Kentucky, she didn’t hesitate.

Over the next three games, Wert went 6 for 7 with four home runs, including two grand slams, and 13 RBIs as the Tigers swept the No. 12 Wildcats. Wert’s second grand slam flew over the scoreboard in left field, a ball that she estimates as one of the longest of her career.

When the team returned home, the first thing on Wert’s mind was getting to the grocery store. But her teammates beat her to it. She didn’t have to make the trip.

As Wert goes, so does Missouri. The team is 13-1 in games that she has homered this year. And as Wert is playing her best ball of the season, so is Missouri. Fresh off a weekend sweep of Texas A&M, the Tigers (31-17, 11-9 SEC) are in the midst of a seven-game win streak, their longest of the season, and are back inside the national rankings at No. 24.

“We’re just having fun again,” Wert said. “We were putting so much pressure on ourselves to not only win but to surpass everyone’s expectations. It was putting too much pressure on us in the box, in the circle, on defense. We just got back to having fun, enjoying each other’s company and playing for the right reasons again.”

The preseason expectations didn’t only revolve around a Women’s College World Series appearance. Entering this year, Wert was nine home runs away from breaking Missouri’s all-time home run record of 48, set by Jen Bruck in 2008.

By the end of February, Wert had clubbed six, and she tied the MU record 10 games later against Illinois.

But the record began weighing on her, and she went homerless in eight consecutive games. Finally, on a 1-0 pitch in the bottom of the fifth inning against South Carolina on April 1, she broke through. Despite having her 2020 season cut short due to COVID-19 and another year spent at Hofstra, her name is now inked into the record books.

“So many people told me that she couldn’t play at this level,” Tigers coach Larissa Anderson said. “I knew deep down she could. I wanted it so much more for her to prove to all the people who were saying no. For her to break the records and to be one of the best hitters in the SEC just shows you her commitment and dedication and how hard she’s worked to get herself to that level.”

Heading into this weekend’s final regular-season series at No. 6 Alabama, Wert is hitting .333 with a team-leading 15 homers and 49 RBIs, and Missouri is up to fourth place in the SEC.

“She’s just a great hitter,” senior centerfielder Brooke Wilmes said. “She knows exactly what she wants and she’s going to go up there and attack it. But she also knows that if she doesn’t have her game, we have her back. When she does, she makes a huge impact on this team, and when she doesn’t, we’re going to do all that we can as a team to pick her up.”

When Wert struggled at the plate in two games against Texas A&M this past weekend, the rest of the lineup picked her up.

“A lot of things just fell into place at the right time,” Wilmes said. “We’ve been working toward all three parts of our game together. We haven’t had one here and there. Now, all three of them are working and they’re just feeding off each other.”

Unless the Tigers win this weekend’s series at No. 6 Alabama or make a long stay at next week’s SEC tournament in Gainesville, Florida, they’re unlikely to host an NCAA regional, though their RPI ranking remains high at No. 20. The Tigers aren’t focused on that, though. When Anderson receives a weekly report from the SEC, she doesn’t even open it.

“I just want to worry about Mizzou softball and that we take care of what we’re doing,” Anderson said.

Wert’s recent success isn’t in the lucky charms alone. She put more work into her swing and started using her legs. But she’s not taking any chances.

“I don’t think I’ll ever get tired of eating them,” she said.

A week after securing a commitment from four-star 2023 QB Gabarri Johnson, the Tigers hosted an more experienced option to possibly compete for starting job this fall.

‘The kids deserve it’: Mizzou players team up with collective to capitalize on their name, image

Mizzou players are among college athletes teaming up with business collectives to capitalize on their name, image and likeness under new NCAA rules.

Former Southern Miss starter will join Tigers as a walk-on with a chance to compete for the starting job in his seventh year of eligibility.

Dennis Gates has two walk-ons committed for next season's team.

Transfer portal fatigue? Embrace these 10 college hoopers coming back to their school

The transfer-portal whirlwind and NBA draft has not lured away these 10 players.

Time was right for Kyle Smithpeters, Mizzou to join sides

As the No. 15 seed, the Tigers will host Arizona, Illinois and Missouri State in the double-elimination regional starting Friday.

Missouri's Kim Wert bats against Georgia in a Southeastern Conference softball game on April 16 in Columbia, Missouri. Wert has set Mizzou's career home run record this season and enters the final series of the regular season with 15 homers.

Missouri's Kim Wert bats against Texas A&M in a Southeastern Conference softball game on Sunday, May 1 in Columbia, Missouri. Wert has set Mizzou's career home run record this season and enters the final series of the regular season with 15 homers.

Kim Wert round the bases after hitting a home run for Mizzou's baseball team. Photo by Zach Bland/Mizzou Athletics