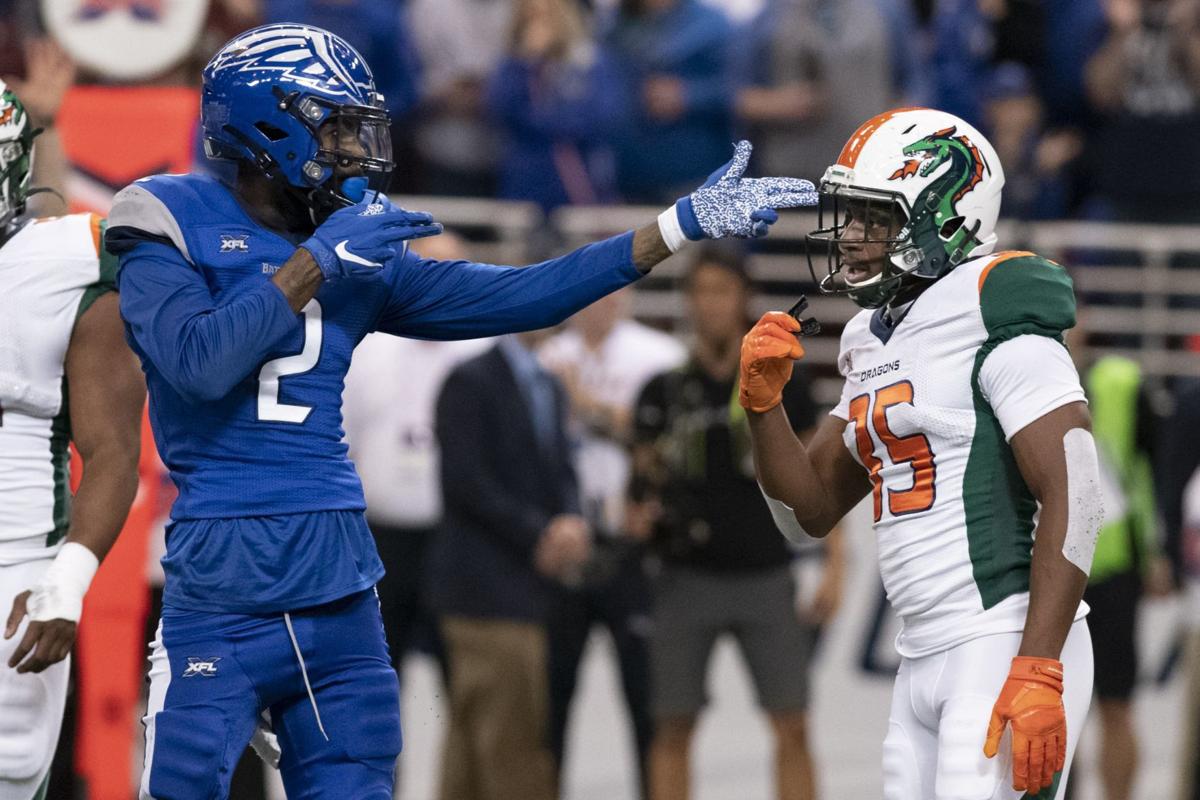 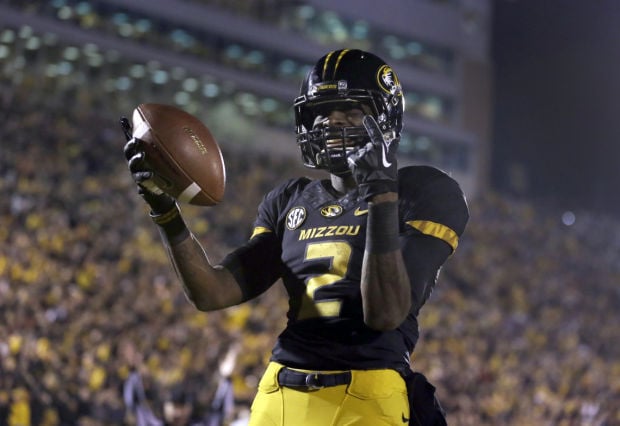 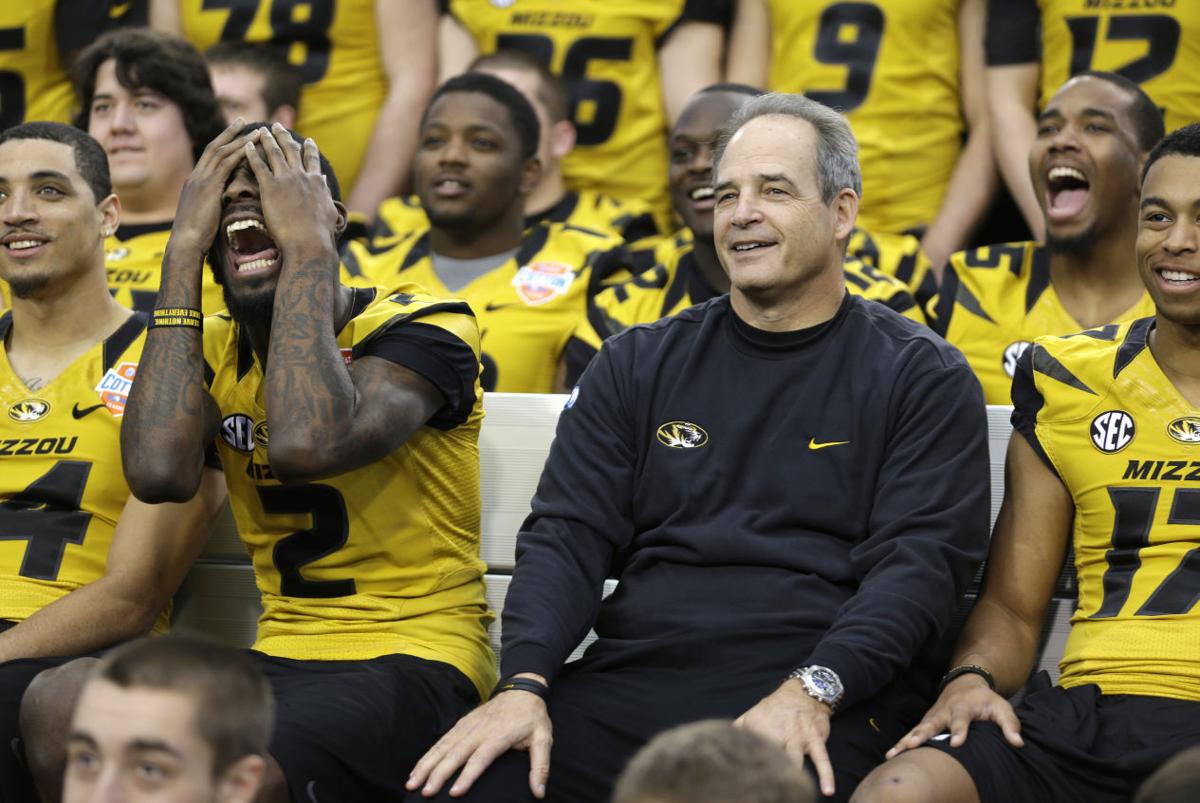 Missouri wide receiver L'Damian Washington (2) and coach Gary Pinkel react as they watch a photographer position himself to take a team photograph during the AT&T Cotton Bowl Classic media day on Monday, Dec. 30, 2013, in Arlington, Texas. Missouri will play Oklahoma State in the annual classic on Friday. (AP Photo/Tim Sharp)

A Mizzou fan favorite is moving on — but maybe not forever.

L’Damian Washington, a prolific wide receiver during the Gary Pinkel years and most recently Eli Drinkwitz’s director of player development, has accepted a job as the new wide receivers coach at Southern University.

The position came open recently and Washington quickly heard from Zach Grossi, the team’s offensive coordinator. Washington, 30, played for the Tigers from 2010-13, catching 100 passes for 1,735 yards and 15 touchdowns.

Washington bounced around several NFL teams and was a starter just last year for the XFL’s St. Louis BattleHawks before the league folded. He’s spent the bulk of his post-college years in Columba working for multiple charity organizations while serving on the board of directors for Gary Pinkel’s GP M.A.D.E. Foundation. He's currently working on a  new Columbia-based non-profit organization.

Now the Shreveport, Louisiana, native will return to his home state and coach at the state’s largest historically Black college and university in Baton Rouge. Also, he’s been chosen for the Bill Walsh Diversity Coaching Fellowship and will spend time with the Kansas City Chiefs during their preseason training camp.

On Tuesday, Washington spoke with the Post-Dispatch about his new opportunities:

Q: What does this opportunity to be a full-time college assistant mean for you?

A: I’ve learned so much from so many coaches and learned so much from the game. So when this came up it was a godsend because just a year ago I was playing in the XFL and if you just think about it enough, now to be a position coach, things really came fast. But I'm very excited. I’m very grateful that the job is back in Louisiana. I'll get to recruit Shreveport, which I'm super familiar with. So that's also a bonus. I'm excited. I grew up around Grambling and Southern football. Those are the only camps I ever attended.

Q: What kind of coaching style will you have? Will you take on any kind of personalities of coaches you played under?

A: I think we're all apart of everybody that we've met, especially in the coaching world. You take stuff from coaches that you know, the styles that you like that they had. Then what you didn’t you just kind of leave it where it is. But in the last year, I’ve gotten to be under (Mizzou receivers coach) Bush Hamdan, who I think is the youngest, brightest mind in college football. He's tremendous. He's been my mentor. He's done nothing but teach me everything. I think I’ll take on the same style that he has. He has a good balance of it all. When he's serious, it's time to go. But he also has a good, personable relationship with the players. They really appreciate that and they respect that.

And of course Coach Pinkel has been huge in molding who I am. So I'll take on a little bit of his role. Coach Pinkel, he means business. He’s kind of got that old school approach He’s all about the details and fundamentals and not missing anything.

Q: Who knows if the XFL will eventually come back for sure, but by taking this job are you officially calling it quits on a playing career?

A: I think when I took the job at Mizzou I called it a quits. Me and working out right now just don't go hand in hand. So I think for sure this is quiets. This is a great opportunity. I've been blessed to be a position coach in a Division I program. I think the SWAC is on the rise. And it's been gaining a lot of momentum. Back in the day Grambling and Southern had a lot of first-round draft picks before Power 5 conferences started allowing African Americans to join. The talent is there for us in Louisiana. I'm super excited.

Q: You’re also starting an internship with the Kansas City Chiefs. What all does that entail?

A: Basically, I'll get to go down to training camp and get to assist with the wide receivers which is huge, because I played receiver and I’m coaching receivers at Southern.  I’ll get to learn Andy Reid and that offense. That offense we all know what that offense is capable of. It’s one of the best if not the best offense in the NFL. It’s actually pretty funny because the Chiefs were the last NFL team I was associated with when I was playing and David Culley was the receivers coach at the time and now the Houston Texans head coach. He was the first person to tell me when I was done playing ball I should get into coaching.

Q: You’ve had this job on Eli Drinkwitz’s staff for the last year or so. What did you take away from that experience?

A: I had a day-to-day personal relationship with all the players. I got to help out and just be around them and build them as young men. I think anytime you're taking on a room as well, that's what you’ve got to do. You're dealing with different personalities. You're dealing with different people from different backgrounds and I got to embrace that role. Coach Drink, honestly, allowed me free access to do it how I wanted to do it. I was director of my own little program. Coach Drink has been tremendous. I love coach Drink and Mizzou is definitely in great, great hands with everything that he brings to the table. Drink and I have a great relationship and he keeps hinting that this is the step I need to come back here (to coach at Mizzou) in a year or two. I don't know what that entails right now for me, but I just have to go to Southern, work hard and do my job.

Q: Your story has resonated with Mizzou fans for more than a decade now. Now that you’re stepping away, what has the program and the school meant to you over all this time?

A: Honestly everything. I say this all the time but Mizzou really saved my life. I think Mizzou saved my family. Mizzou has shown us so much. My brothers live here now. This is definitely home. I don't see me leaving here permanently for too long no matter where the world takes me. I'll always come back here. But Mizzou fans have become my family. I came here as a 17-year old boy. Now I'm leaving as a 30-year old man. Mizzou has raised me and I'm forever grateful. I’m always going to give back to this university. And not only just Mizzou but the Columbia community. … Mizzou has truly, truly been my family. And I love it here.

Mizzou softball is back in the super regionals for the first time since 2016. In the this episode of Eye On The Tigers, Mizzou beat writer Dav…

Missouri wide receiver L'Damian Washington (2) and coach Gary Pinkel react as they watch a photographer position himself to take a team photograph during the AT&T Cotton Bowl Classic media day on Monday, Dec. 30, 2013, in Arlington, Texas. Missouri will play Oklahoma State in the annual classic on Friday. (AP Photo/Tim Sharp)