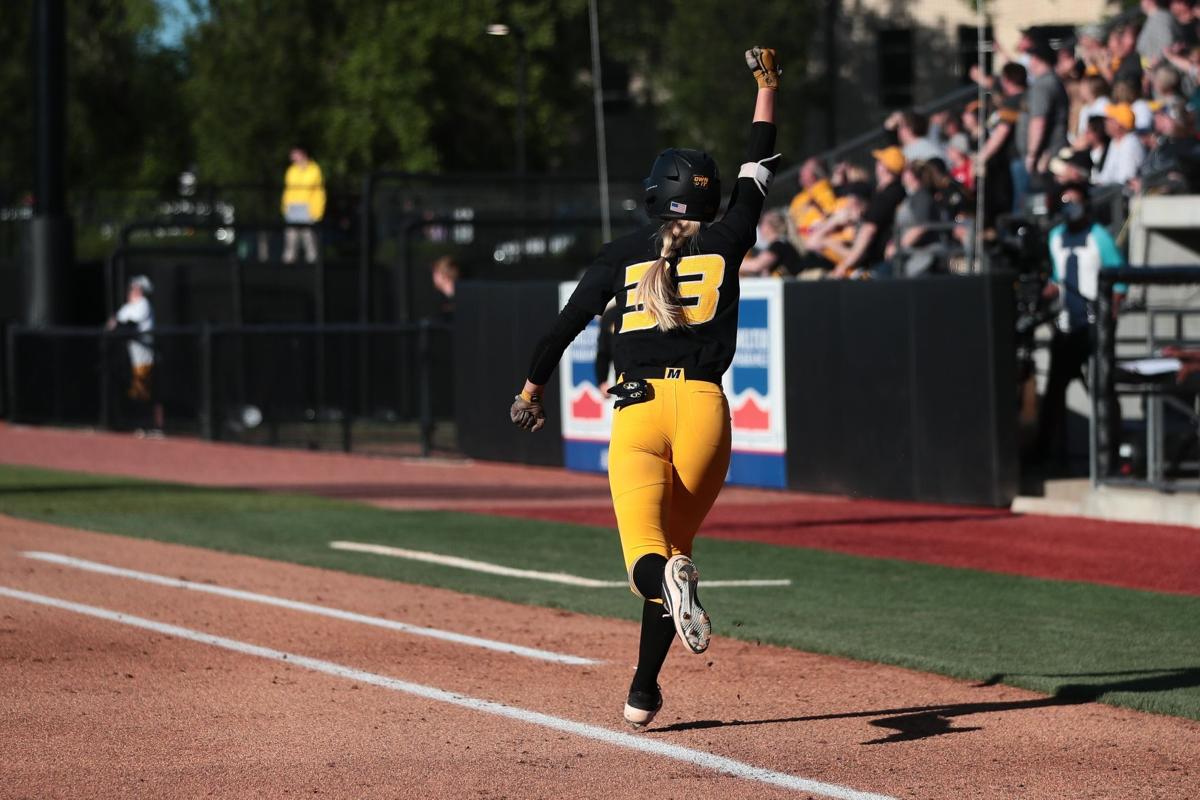 Missouri's Cayla Kessinger runs to first base on her first of two home runs against James Madison in Game 2 of the NCAA super regional series May 29 in Columbia, Missouri. Mizzou Athletics photo 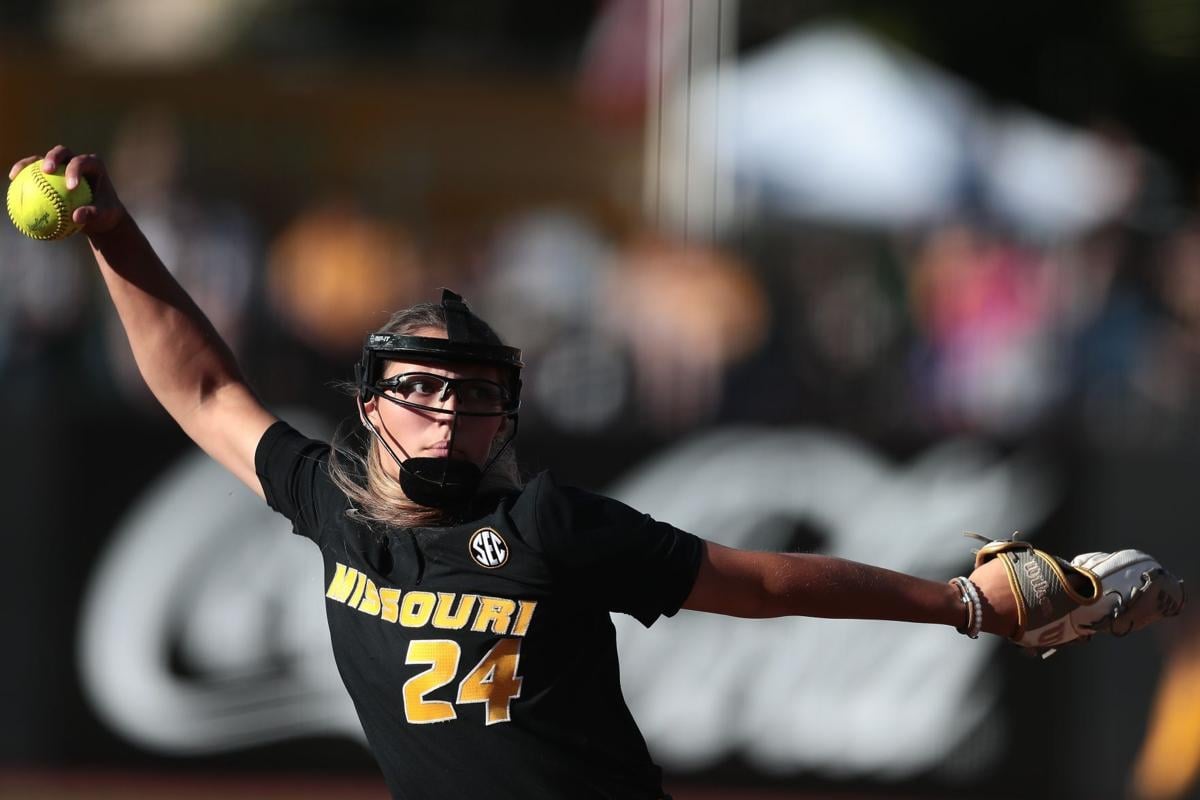 After barely putting the ball in play Friday, the Tigers upgraded to home run derby Saturday, blasting three James Madison pitches out of Mizzou Stadium in a 7-1 victory to even the best-of-three NCAA super regional series.

At stake in Sunday’s championship game, a place in the eight-team field for the Women’s College World Series. The Tigers (42-16) last reached the WCWS in 2011. James Madison (38-2), its 28-game winning streak ended Saturday, will play for its first appearance. Sunday’s deciding game starts at 11 a.m. on ESPN.

On Saturday, in front of another Mizzou Stadium record crowd of 2,679, the Tigers’ six-run second inning was more than enough to back freshman starter Laurin Krings (11-3), who held the Dukes to four hits and no walks while matching her career-high with 10 strikeouts.

JMU finally got to Krings in the seventh with a couple doubles, but with the capacity crowd on its feet, she got Lynsey Meeks to flail at the game’s final strike, setting off an eruption in the stadium as catcher Hatti Moore jumped out of her crouch, pumping her fist.

A Missouri team seemingly most vulnerable in the circle this postseason delivered another brilliant start from its young pitching staff.

“To get that out of a freshman is just incredible,” Anderson said. “She had such great command today.”

As for the strength of Anderson’s team, the Tigers’ usually potent lineup mustered just one hit and rarely made hard contact in Friday’s 2-1 loss against JMU standout starter Odicci Alexander. Facing the same matchup Saturday, the Tigers appeared to make the right adjustments, knocking Alexander out of the circle before she could complete the second inning.

A day after Alexander threw 125 pitches in Friday’s win, things unraveled for the senior righthander in the second after a leadoff strikeout, starting with Cayla Kessinger’s solo blast for a 1-0 Mizzou lead. During the at-bat there was some confusion on the count when the scoreboard flashed three balls and two strikes when it was actually 2 and 2, causing a brief delay. Once play resumed, Kessinger drilled Alexander’s first pitch into the crowd behind the right-field wall.

“I wasn’t going to let her beat me again,” said Kessinger, 0 for 2 with a walk against Alexander on Friday. “She’s a great pitcher. Don’t get me wrong. She throws hard and she spots the ball and her ball moves. I had a different approach going into today and was trying to get ahead and stick to my game and put a good piece of the barrel on the ball. Luckily it went in my favor.”

Later in the inning, Alexander should have escaped on Abby George’s routine grounder to the circle, but first baseman Hannah Shifflett couldn’t handle Alexander’s throw, allowing Casidy Chaumont to score from third on the error.

Next up, Brooke Wilmes smashed a three-run homer to left-center for a 5-0 lead. From there, Jenna Laird smoked a double off the center-field wall to force JMU’s first pitching change of the weekend with Alissa Humphrey replacing Alexander. Hatti Moore greeted her with an RBI single.

“Sometimes you guess right and they guessed right on some pitches,” JMU coach Loren LaPorte said.

Anderson credited the team’s video study and afternoon hitting session with assistant coach Chris Malveaux for Saturday’s improved approach at the plate. One focus: Resist the off-speed pitches out of the zone.

“We were trying to hit every single pitch (Friday),” Anderson said. “The changeups she was throwing they weren’t for strikes and we were still trying to hit them. We just had a better game plan going in. And we stuck to the game plan and didn’t panic.”

Alexander (15-1) was tagged for only one earned run for the six she allowed but suffered her first loss of the season.

Kessinger donned the team’s celebratory home run hat for the second time in the third after crushing a Humphrey pitch to left-center for her 14th homer of the season.

By the end of Mizzou’s game Saturday, five other teams had already punched their tickets to Oklahoma City for spots in the WCWS, including fellow Southeastern Conference foes Alabama and Georgia. Arizona, Florida State and Oklahoma also advanced, while UCLA and Virginia Tech were playing their deciding Game 3 Saturday night. Texas and Oklahoma State play their deciding game Sunday.

After Saturday’s game, the Tigers had a curfew and a meticulous schedule Sunday morning to prepare for a quick turnaround, but Anderson wasn’t worried about her team being ready for the high-stakes moments that waited.

“The game motivates you,” she said. “I’m not going to have to say anything or do anything different. They’re going to be pumped up. It’s winner take all.”

Mizzou plans to have Memorial Stadium back to full capacity for the 2021 football season for what he believes can be a special one for Eli Drinkwitz's program.

Tigers coach shared some first impressions of his newcomers on Thursday.

Summer school's in session for Mizzou's cast of newcomers

The 12-team playoff movement continues to have momentum as CFP board of managers authorizes a summer feasibility study.

Defensive back from Texas, a 2022 target, changes commitment after official visit to Mizzou.

Quin Snyder paid his dues after he flamed out at Mizzou, and 15 years later it's time to recognize he's among the among the NBA's elite coaches.

Missouri's Cayla Kessinger runs to first base on her first of two home runs against James Madison in Game 2 of the NCAA super regional series May 29 in Columbia, Missouri. Mizzou Athletics photo