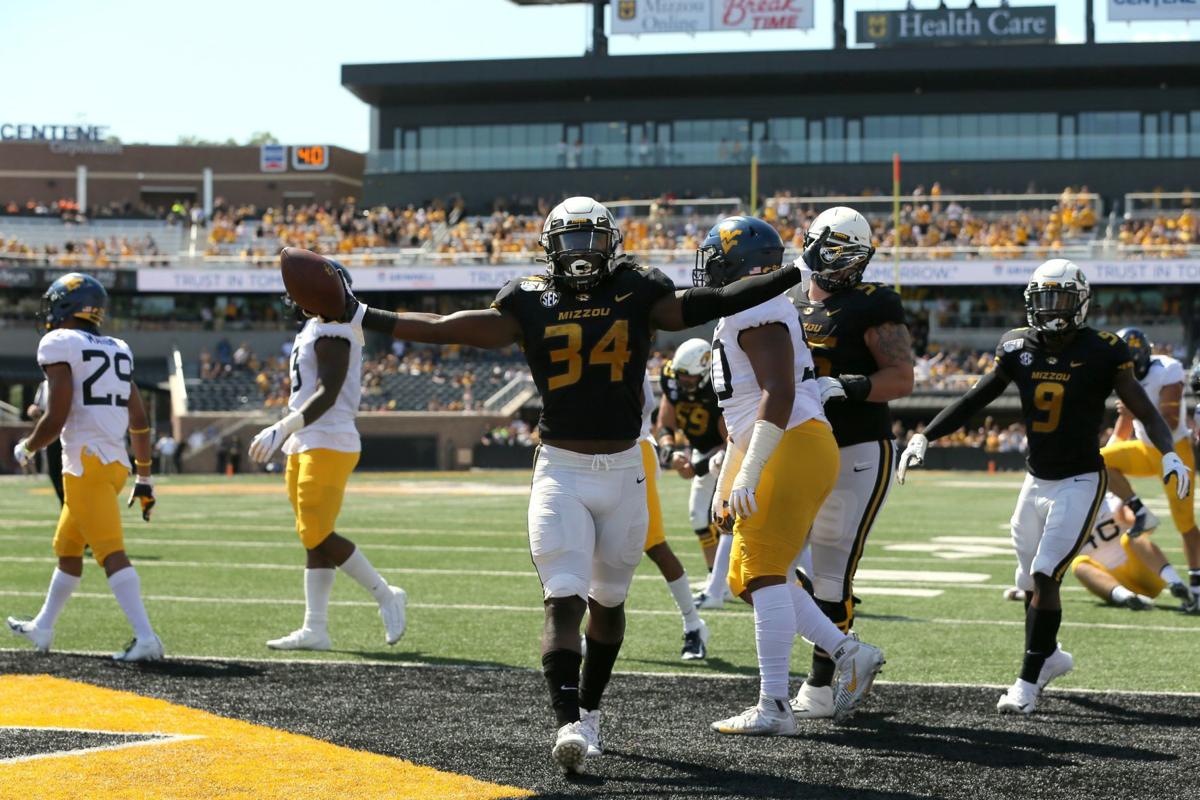 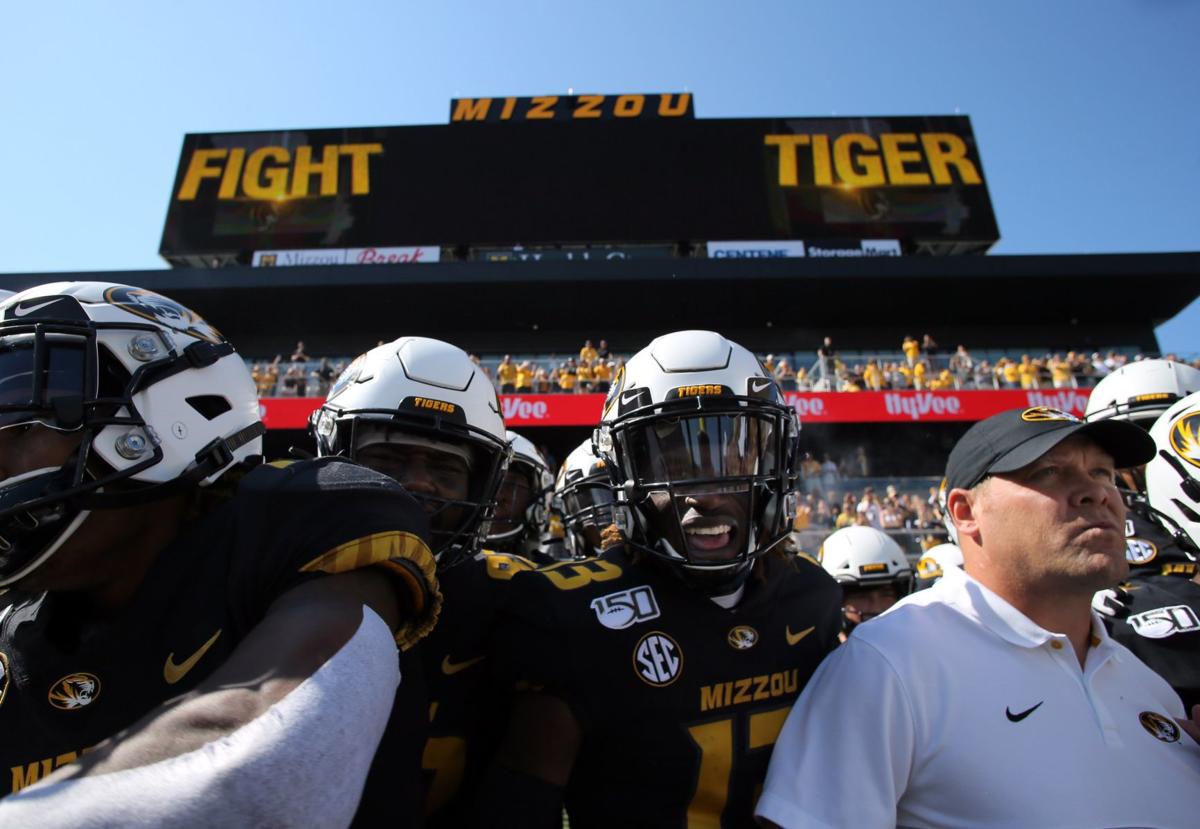 The Missouri Tigers and head coach Barry Odom enter the stadium for the game against West Virginia on Sept. 7 at Faurot Field. Photo by David Carson, dcarson@post-dispatch.com 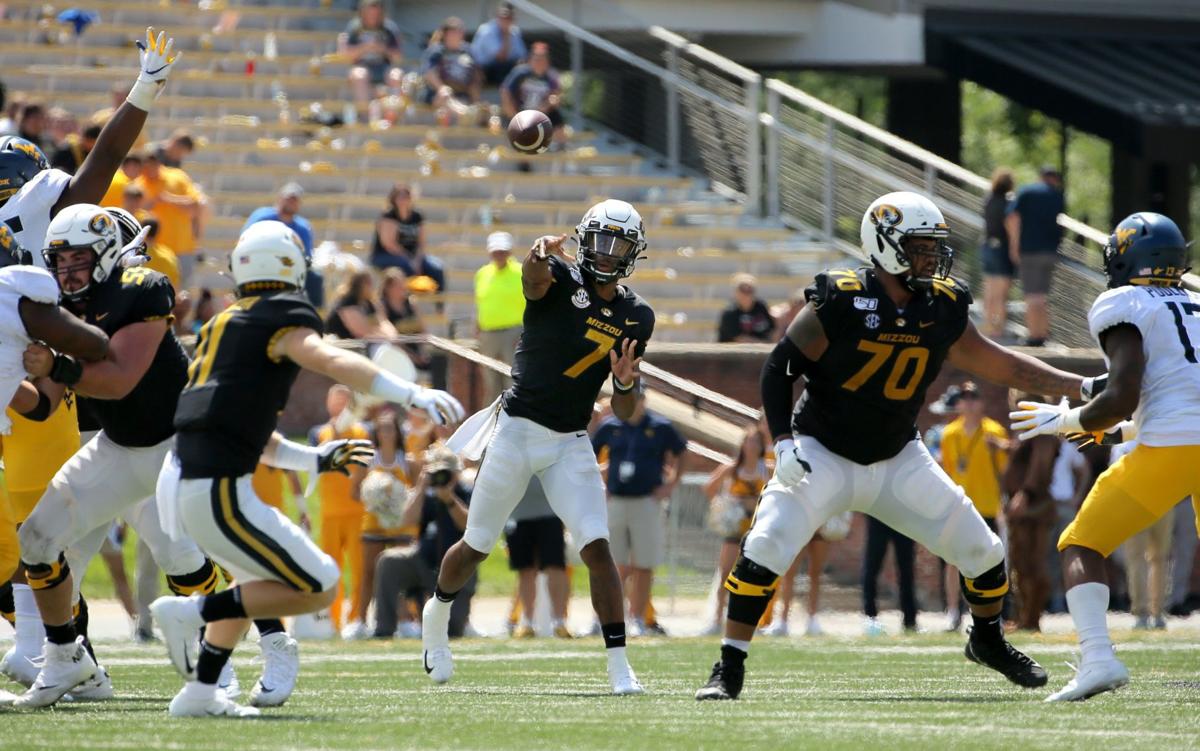 Missouri quarterback Kelly Bryant throws a pass in the second quarter during a game between the West Virginia Mountaineers vs the Missouri Tigers on Faurot Field at Memorial Stadium in Columbia, Mo. on Saturday, Sept. 7, 2019. Photo by David Carson, dcarson@post-dispatch.com 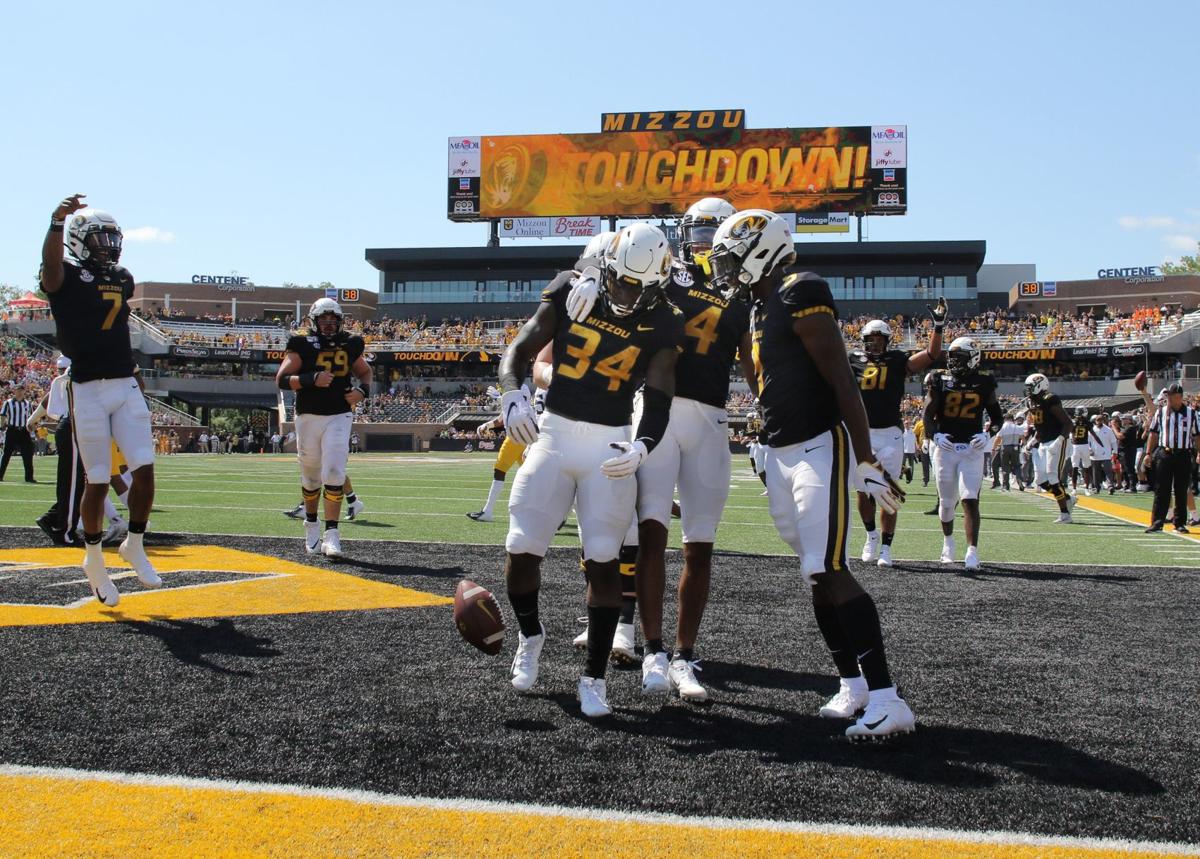 Missouri Tigers running back Larry Rountree III (34) is congratulated by teammates after scoring a touchdown in the second quarter during a game between the West Virginia Mountaineers vs the Missouri Tigers on Faurot Field at Memorial Stadium in Columbia, Mo. on Saturday, Sept. 7, 2019. Photo by David Carson, dcarson@post-dispatch.com

That was Barry Odom’s theme this week as his Missouri football team tried to recover from a humbling Week 1 loss at Wyoming. The Tigers might have wasted months of preparation and sabotaged their entire season if they let one miserable performance multiply into more.

Mizzou couldn’t erase what happened in Wyoming, but they’d never move on unless they believed in their teammates, their coaches and their game plan moving forward. Odom delivered that message all week. It especially resonated for a defense last seen getting trampled in Wyoming.

“Rely on the person next to you to do their job and trust the coaching staff is going to put us in the best position possible to win the game,” senior linebacker Cale Garrett said Saturday. “That's something that I've always had faith in, but fully embracing it on a daily basis is what's most important. To be able to do that with 11 guys on the field is a lot to ask, but if everybody buys into it, it can really be something special.”

For one day, Missouri’s defense was exactly that.

The Tigers team that fumbled and bumbled its way through last week’s season-opening loss didn’t show up for Saturday’s home opener against West Virginia. Instead, the Tigers looked like a different team on both sides of the ball in a 38-7 victory.

With an announced crowd of 51,125 on hand for the opening of the new south end zone renovations and the debut of alcohol sales at Memorial Stadium, Mizzou’s defense broke out a vintage performance, the kind rarely seen in Odom’s three-plus years in charge.

With members of the Stanley Cup champion St. Louis Blues in attendance Saturday, Odom’s defense did its best Jordan Binnington impression and nearly blanked the Mountaineers, whose only points came on a touchdown pass with 5:13 left against the backup defense.

Count Mountaineers coach Neal Brown among those impressed with the Tigers’ one-week recovery.

“I watched them all summer and they look like a team that can contend for the (SEC) East,” Brown said. “Their performance at Wyoming was not a true indicator of who they are. Today was a much better indicator.”

Playing almost exclusively in their 4-2-5 base structure, the Tigers (1-1) forced three turnovers, collected three sacks and 13 tackles for loss, deflected five passes and intercepted two and completely swarmed and smothered every facet of Brown's offense. WVU (1-1) had negative rushing yards until the game’s second-to-last series and finished with just 171 yards of offense, the fewest for any of Mizzou's FBS opponents since 2013.

“They were on a mission,” Odom said.

Odom was quick to credit defensive coordinator Ryan Walters, the scourge of Missouri fans last week after Wyoming gashed the Tigers for nearly 300 rushing yards. Unlike a week ago, the Tigers controlled the line of scrimmage, made crisp tackles in open space and consistently put heat on the pocket. The Mountaineers didn’t have a run longer than 9 yards.

Sophomore linebacker and first-year starter Nick Bolton was the defense’s breakout star with two interceptions, the second ending in the end zone after a 20-yard return. Senior safety Ronnell Perkins added an interception off a pass Garrett deflected. A week after going minus-three in the turnover battle, the Tigers were plus-three Saturday, which underscored the message behind the business cards Odom passed out to his players last week that read, “Takeaways=Victory.”

“Coach Walters really knows how to use us and get everybody in the right position in the right place to make the play,” Perkins said. “The biggest thing for us was to stick together, not listen all the outside noise and understand this was a new week and a new opportunity.”

Other than a mountain of penalties, Odom couldn’t have scripted a better first half as the Tigers took a 31-0 lead into the break. The Tigers finished the half with more penalty yards (100) than WVU’s offensive yards (78). Everything else imploded on the Tigers at Wyoming worked out in the first 30 minutes against the Mountaineers.

Remember that rancid running game? The Tigers ran for 149 yards and averaged 5 yards per attempt in the opening half. Larry Rountree got back to bowling over defenders and finished the game with 99 yards and a touchdown. By game’s end, MU’s three running backs combined for 227 yards.

In his Faurot Field debut, quarterback Kelly Bryant toyed with the WVU pass rush, slipping out of sacks left and right and completed 17 of 25 passes for 150 yards and three touchdowns, two to tight end Albert Okwuegbunam. Bryant left the game late in the third quarter and went into the locker room after becoming overheated.

By then, West Virginia’s offense was running on fumes. Bolton ruined WVU’s second drive when he picked off a pass that bounced off a receiver's hands, then off a split on Bolton's hand.

“Impressive to say the least,” Garrett said. “I'm proud of him. We knew he was capable of doing that.”

On WVU’s next series, Garrett got a hand on Kendall’s pass on third and long and tipped it right to Perkins. Missouri’s defense shook off early penalties and showed some gumption when WVU first visited the red zone midway through the second quarter. On third and long, Garrett blitzed up the middle and dragged down Kendall for MU’s first sack of the season. The Mountaineers missed a 47-yard field goal on its best scoring chance of the half.

WVU switched quarterbacks to begin the fourth quarter, but backup Jack Allison had no better luck. Bolton snatched his second pass and dashed to the end zone for the final touches on a defensive masterpiece — for one day at least.

The Tigers missed 13 tackles and gave up two long touchdown runs in a discouraging season-opening loss to Wyoming.

1. Can Tigers rediscover the run?

Missouri football players carried more than the disappointment of their season-opening loss to Wyoming around campus this week.

The Missouri Tigers and head coach Barry Odom enter the stadium for the game against West Virginia on Sept. 7 at Faurot Field. Photo by David Carson, dcarson@post-dispatch.com

Missouri quarterback Kelly Bryant throws a pass in the second quarter during a game between the West Virginia Mountaineers vs the Missouri Tigers on Faurot Field at Memorial Stadium in Columbia, Mo. on Saturday, Sept. 7, 2019. Photo by David Carson, dcarson@post-dispatch.com

Missouri Tigers running back Larry Rountree III (34) is congratulated by teammates after scoring a touchdown in the second quarter during a game between the West Virginia Mountaineers vs the Missouri Tigers on Faurot Field at Memorial Stadium in Columbia, Mo. on Saturday, Sept. 7, 2019. Photo by David Carson, dcarson@post-dispatch.com