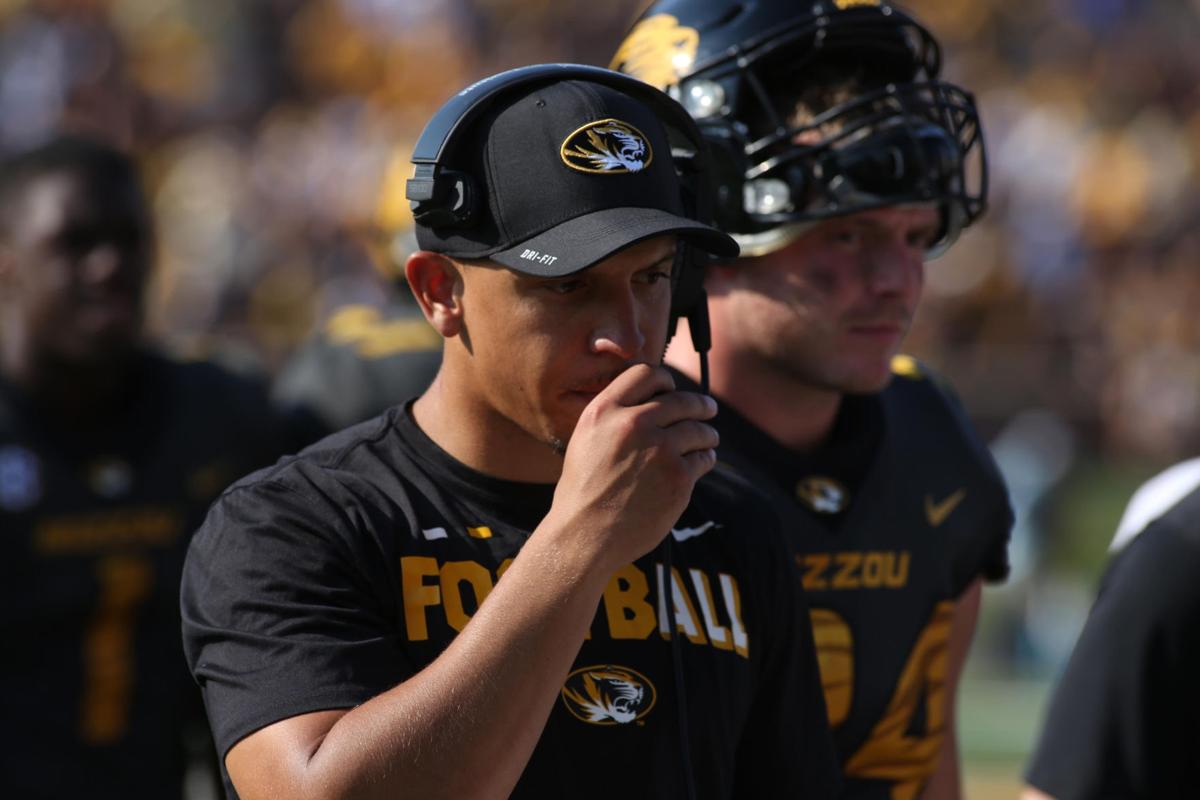 Ryan Walters has been Mizzou's defensive coordinator since the end of the 2017 season and was one of three defensive assistants Drinkwitz retained on the staff. (photo provided by Mizzou Athletics)

COLUMBIA, Mo. — Missouri football coach Eli Drinkwitz is in the market for a new defensive coordinator. That’s because Ryan Walters is headed to Illinois to take on the same position under new head coach Bret Bielema, multiple sources confirmed Wednesday.

Reached on Wednesday, Walters did not confirm he had accepted the job but indicated via text message he was leaving Mizzou. Illinois officially announced the hire Thursday morning.

"I'm thankful and grateful for the opportunity that Coach Bielema is giving me to coach with him at the University of Illinois," Walters said. "Coach B is one of the most respected defensive minds in college football, and, as a young defensive coordinator, this is an opportunity I can't pass up. Coach B has a proven track record of incredible success in the Big Ten, as well as his years working in the NFL, that will put our program in position to win at a high level. I appreciate the time and opportunity that I had at Missouri, but my family and I are looking forward to the new challenge in front of us as we build a championship football program."

Walters, 34, has been Mizzou’s defensive coordinator since the end of the 2017 season and was one of three defensive assistants Drinkwitz retained on the staff when he took over the program after the 2019 season, along with defensive line coach Brick Haley and cornerbacks coach David Gibbs. Walters agreed to a new contract last January that pays him $900,000 per year through the 2022 season. He interviewed for the head-coaching job at Colorado, his alma mater, last February. Terms of Walters' deal at Illinois were not released Thursday.

"I'd like to wish Ryan, Tara and his family well as they begin a new chapter in his coaching career," Drinkwitz said in a statement posted on Twitter. "Ryan is a coach of great character, work ethic and leadership. We are grateful for his contributions to Mizzou and wish him and his family well in the future."

"It is a great pleasure to bring Ryan here to the University of Illinois Football Family," Bielema said. "Ryan has demonstrated great success in his coaching career as an assistant, as a coordinator and as a leader of young men. He'll be a great addition to our staff to help us motivate, recruit and develop a roster full of champions. Ryan and his family will be a terrific fit in our program, at our university and in the Champaign-Urbana community."

According to Walters’ contract if he leaves Mizzou for a coordinator position at a school outside of the Southeastern Conference, he owes MU a maximum buyout of $225,000. His contract calls for Walters to pay MU no more than six months of his monthly salary ($75,000) times a multiplier of 0.5, which equals $225,000.

Under Walters’ watch, the 2019 Mizzou defense ranked among the nation’s top 15 in several categories — No. 14 in yards allowed per game (312) and No. 15 in points allowed per game (19.4) — but against a 10-game SEC schedule this past season, the Tigers dealt with multiple injuries, opt outs and other roster shortages and allowed 35 or more points in seven games. The defense especially struggled down the stretch, allowing 18 touchdowns the final three games against Arkansas, Georgia and Mississippi State.

Walters first came to Mizzou in 2015 to reunite with Barry Odom, then the Tigers’ defensive coordinator. They previously had coached together at Memphis. He was among several staffers who stayed at Mizzou after Odom replaced Gary Pinkel as head coach following the 2015 season.

Walters’ hiring means both Illinois coordinators will have worked on Mizzou’s 2019 staff. Bielema recently hired Tony Peterson to run the Illini offense. He served on MU’s 2019 staff as an offensive analyst under coordinator Derek Dooley. Coincidentally, Petersen was Appalachian State’s offensive coordinator this past season, after Drinkwitz left there to coach Mizzou.

Bielema announced Tuesday that he’s retaining assistant coach Cory Patterson, who will now coach the Illini running backs. Patterson, the former head coach at Trinity Catholic High School, was one of Illinois’ primary St. Louis recruiters under former coach Lovie Smith. Walters was among the four assistants Drinkwitz had assigned to recruit the St. Louis area, but he’s spent most of his time at MU recruiting Florida and Texas. With six years on the Mizzou staff he figures to be a recruiting asset in the St. Louis region for Bielema.

Where will Drinkwitz turn next to take over the Mizzou defense? Gibbs would be a possible internal candidate. Gibbs has been a coordinator at several Power Five programs, most recently at Texas Tech from 2015-18, and took over the coordinator duties this past season when Walters was in quarantine for two weeks. Gibbs served as the team’s coordinator for the Nov. 21 victory at South Carolina when Walters had to stay home in Columbia after his wife tested positive for COVID-19. Gibbs is lobbying for the job, a source said Wednesday.

Several high-profile defensive coaches are also on the open market, including two former Southeastern Conference head coaches, Derek Mason and Will Muschamp, who were both fired this past season.

Mizzou’s next defensive coordinator will be the program’s sixth since 2001.

Matt Eberflus, now the Indianapolis Colts’ coordinator, held that role under Gary Pinkel from 2001-08, followed by Dave Steckel from 2009-14. When Steckel left Columbia for the head-coaching job at Missouri State, Pinkel brought back Odom to take over the defense. The following year, Odom became head coach and hired former Mizzou teammate DeMontie Cross as coordinator, only to fire Cross two games into the 2017 season. Odom managed the defense for the rest of the regular season then officially promoted Walters to coordinator for the Tigers’ Texas Bowl against Texas.

Mizzou in Review: Bazelak took the reins at QB in 2020

Ryan Walters on leaving Mizzou for Illinois: 'It was time to pave my own way.'

Ryan Walters has been Mizzou's defensive coordinator since the end of the 2017 season and was one of three defensive assistants Drinkwitz retained on the staff. (photo provided by Mizzou Athletics)