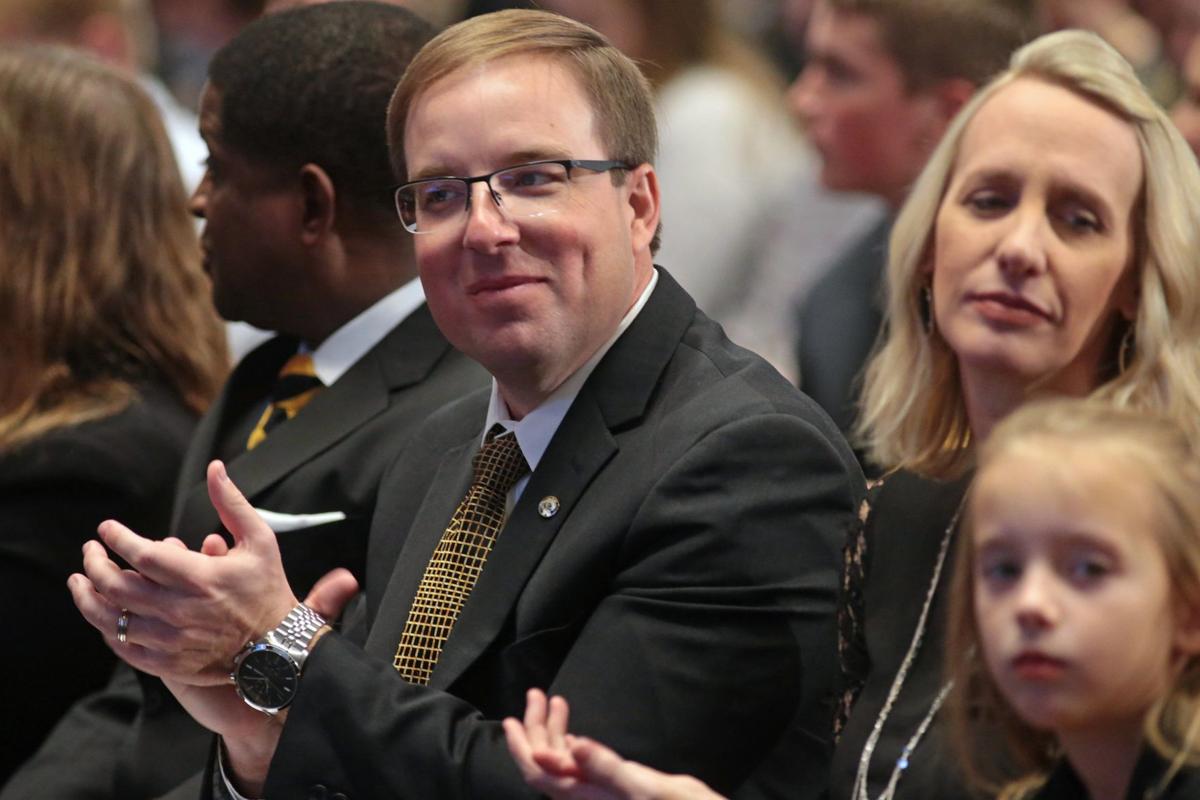 Eliah Drinkwitz, the new football coach at the University of Missouri, claps during a news conference announcing his hiring in the Show-Me Club at Memorial Stadium on Tuesday, Dec. 10, 2019. He continues to build his recruiting class. (Cristina M. Fletes, cfletes@post-dispatch.com) 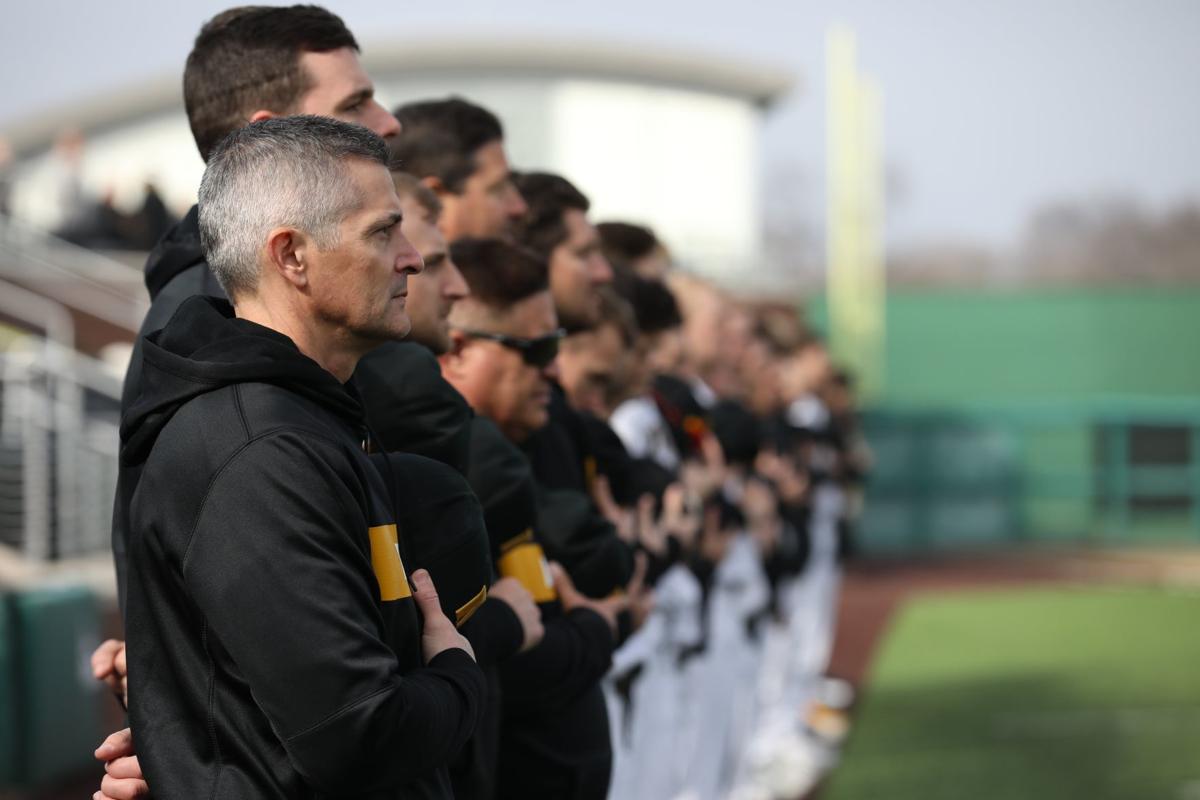 Missouri baseball coach Steve Bieser and his team stand for the national anthem during a game this season at Taylor Stadium in Columbia, Mo. Mizzou athletics photo

Also, with his team facing a postseason ban for the upcoming season, Missouri baseball coach Steve Bieser received a three-year contract extension and raise through the 2024 season. His full salary increases from $300,000 to $400,000. His original five-year deal was set to expire after the 2021 season.

Defensive line coach Brick Haley, one of three defensive holdovers from Barry Odom’s staff, had another year added to his deal plus a hefty raise through the 2022 season. MU is still finalizing new terms for defensive coordinator Ryan Walters and defensive backs coach David Gibbs, also retained from Odom’s staff.

Four of the new hires received significant raises from their 2019 salaries at other schools and all agreed to the same incentives package with a maximum yearly value at $165,000. They’ll also receive a complimentary car or a monthly car stipend of $500.

Luper, brought to Mizzou from Texas Christian University where he was the Horned Frogs’ co-offensive coordinator, will make $550,000, the most among the staff’s new additions. He’s signed through Feb. 28, 2023.

Luper and the other new assistants agreed to base salaries of $300,000 plus additional non-salary compensation that differs for each coach and covers “participation in radio/television/internet or streaming shows, speaking appearances, marketing events, apparel or footwear contracts and all such matters related to community or University functions.” Luper’s non-salary compensation is $250,000.

Walters, staying at Mizzou as defensive coordinator, had two years left on his deal through Feb. 28, 2022 with a salary of $800,000, the highest among all the current assistants. Gibbs, also retained by Drinkwitz, made $300,000 in 2019, his first year on the staff, and had a clause in his contract that pushes his salary to $420,000 for 2020. New strength and conditioning coach Zac Woodfin, joining the program from Kansas, has a two-year deal for $400,000 ($300,000 base plus $100,000). New director of football operations Andrew Lutz agreed to a two-year deal worth a total of $175,000. He comes to MU from Appalachian State and replaces Brittany Boehm-Johnes, who’s no longer part of Mizzou’s staff.

Drinkwitz’s complete contract has not been released. After one season as the head coach at Appalachian State, he agreed to a six-year deal with a $4 million annual salary and an incentive package that maxes out at $850,000 annually.

All of the new assistants agreed to an incentives package that rewards them if the team hits certain milestones for academics, victories, bowl games and championships. For the coaches to be eligible for such incentives, the team must have a minimum multiyear Academic Progress Rate score of 930.

Here’s how the incentives break down:

* The coaches make an additional $10,000 for the team hitting an “academic aspirational achievement” goal.

* If MU finishes in the top 25 of the AP poll, coaches poll or College Football Playoff rankings, the coaches make $5,000.

* If an assistant coach is named a finalist for the Broyles Award, he makes $5,000. That bonus increases to $10,000 if the coach wins the award.

As for Bieser, MU officials signed off on his new contract in late December, agreeing to pay him an annual base salary of $300,000 plus non-salary compensation of $100,000.

Bieser is 104-67-1 through three seasons at MU, the most wins for any MU baseball coach through his first three years, and just missed an NCAA regional each of the last two years. He might have his best Mizzou team in 2020, but the Tigers are banned from both the SEC and NCAA tournaments as part of the NCAA case against former tutor Yolanda Kumar, who did coursework for several former MU athletes from 2015-16, before Bieser ever coached a game for the Tigers.

His new deal was extended three years through July 31, 2024 and includes an option for more extensions. If Mizzou makes the NCAA tournament under Bieser’s watch or finishes No. 35 or higher in the final RPI rankings of the regular season, he’s eligible to have one year added to his contract, provided the team maintains an Academic Progress Rate multiyear score of 930. He’s eligible for that extension only twice through the length of his new deal.

Should Bieser leave Mizzou before his contract expires, he owes the school $600,000 if he leaves on or before July 1, 2020, after which the total decreases by $150,000 each year. If he’s fired without cause, MU owes Bieser his base salary ($300,000) for every year left on his deal, offset by his salary at his next job.

No stranger to controversy and scandal, 58-year-old Petrino is the choice to replace Dave Steckel and breathe life into Bears football.

Eliah Drinkwitz, the new football coach at the University of Missouri, claps during a news conference announcing his hiring in the Show-Me Club at Memorial Stadium on Tuesday, Dec. 10, 2019. He continues to build his recruiting class. (Cristina M. Fletes, cfletes@post-dispatch.com)

Missouri baseball coach Steve Bieser and his team stand for the national anthem during a game this season at Taylor Stadium in Columbia, Mo. Mizzou athletics photo