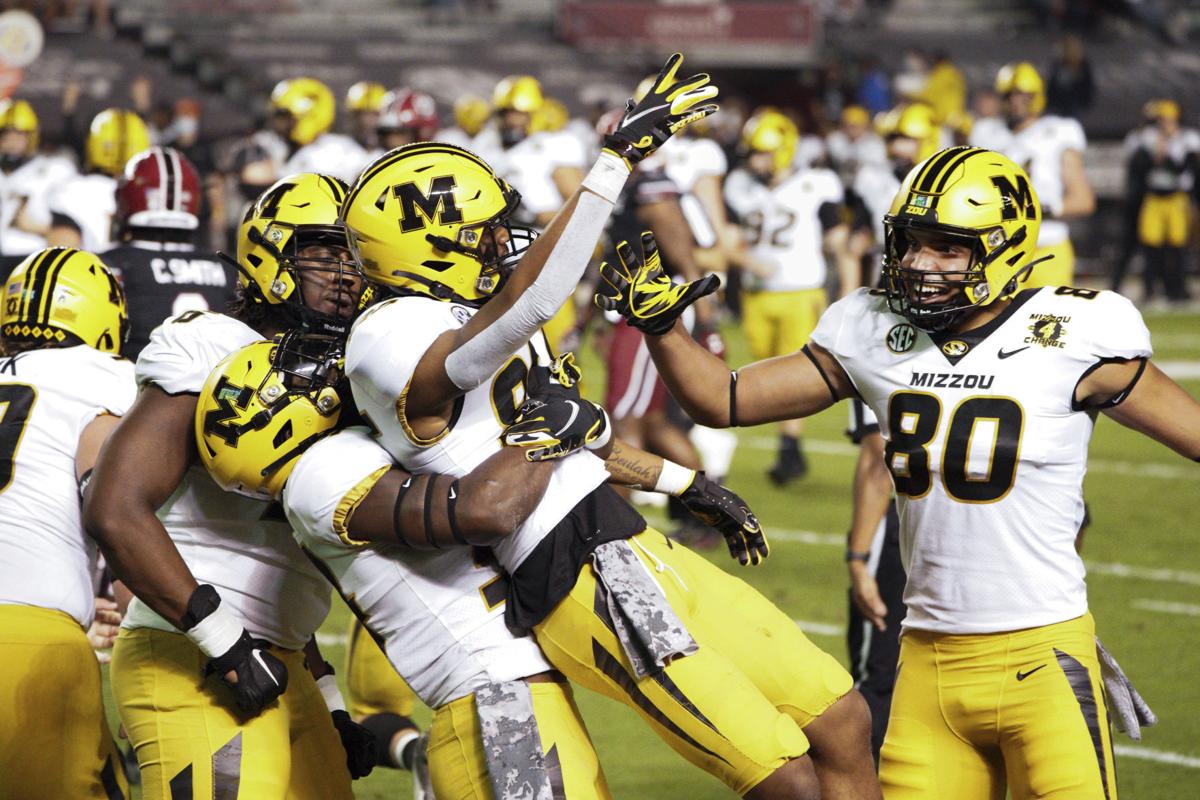 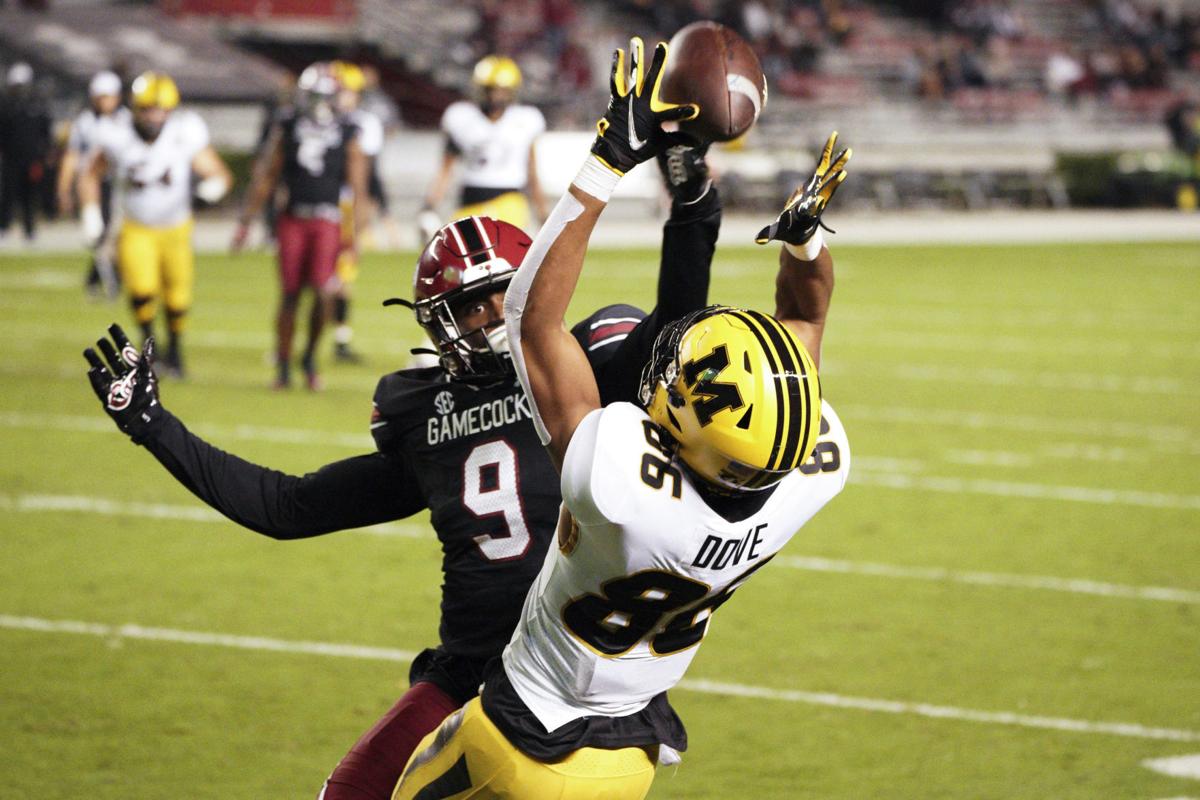 COLUMBIA, S.C. — With just enough players to field a team, the Missouri Tigers came to the Southeastern Conference’s other Columbia as favorites for the first time this season. They played like it for the first half Saturday at South Carolina.

The second half lived up to 2020’s pledge to make nothing easy.

On the field for their first game in three weeks and with a roster depleted because of injuries and COVID-19 contact tracing, the Tigers outlasted South Carolina 17-10, needing a takeaway in the game’s final minute to clinch their first road victory under coach Eli Drinkwitz.

Those who stuck around had their hearts in their throat . . . until Mizzou linebacker Devin Nicholson snagged Luke Doty’s pass to seal the win that brought the Tigers to 3-3.

Among those back home in Missouri was Tigers’ defensive coordinator Ryan Walters, who has been away from the team for nearly two weeks. When his wife, Tara, tested positive for the virus, Walters and their two sons had to quarantine at their home in Columbia. As of Saturday, Walters and both boys have tested negative.

With cornerbacks coach David Gibbs calling plays from the sideline, Walters watched their defense dominate the Gamecocks in the first half then squelch the comeback in the second.

“Crazy isn’t the word, man,” Walters said via text message late Saturday night. “Proud of the team and definitely proud of our defense. Had full confidence in our players and our staff. I’ve always said it’s a collective effort putting together and implementing a game plan and that definitely held true tonight. Thought Gibbs did a great job of putting our guys in good positions and being smart in situational football. Kudos to Drink because we’ve had this COVID plan in place since July so it wasn’t an operational shock to anybody when I got contact traced.”

He wasn’t the only one ensnared in the net of contact tracing. Mizzou had only 52 available scholarship players Saturday — four more made the trip but were out because of injuries — and didn’t have key players along both lines and in the secondary. Last week, the Tigers had too few defensive linemen to face Georgia but had just enough bodies Saturday at the three position groups the Southeastern Conference requires a minimum number of players.

“We wanted to play no matter what,” Drinkwitz said. “As long as we didn’t have something from a medical standpoint that we would have considered it to be an outbreak we were going to play. . . . We’re running low, but we felt like it was important to give our guys an opportunity to play.”

They were able to do that.

“At the end of the day nobody’s nobody really cares (how many players) we have,” quarterback Connor Bazelak said. “They want wins. The fans want wins. With whoever we’ve got, that’s what we’ve got to do.”

In the Tigers’ first visit here since their meltdown in the monsoon in 2018, they tempted fate again in the second half, ceding momentum to the home team after racing to a 17-0 halftime lead. In a chilling reminder of another Mizzou collapse against South Carolina, a second-half quarterback change sparked a surge for the Gamecocks.

With 4:59 left, the Gamecocks punched in a 1-yard touchdown run to make it a one-score game. This time, though, Mizzou’s lead proved durable enough. The Tigers punted on their next series — all five of their second-half possessions ended on the foot of punter Grant McKinniss — but the transfer from Kentucky saved his best for last, dropping a beauty to South Carolina’s 1-yard line.

Doty, a freshman quarterback, managed a few first downs but didn’t see Nicholson covering the middle of the field and hit him square in the hands to extinguish the rally.

“He didn’t get enough air on the ball and we had somebody underneath and over the top,” said Missouri linebacker Nick Bolton, who continued his All-American campaign with 14 tackles, two in the backfield.

It was Mizzou’s only takeaway on a night the Tigers held South Carolina to 283 yards and tallied nine tackles for loss, including three sacks. Gamecocks running back Kevin Harris, who began the day as the SEC’s leading rusher, totaled just 58 yards on 16 attempts. The Gamecocks (2-6) visited the red zone just once in 11 possessions. It helped that star wideout Shi Smith suffered an injury on the game’s first possession, but the Tigers weren’t going to apologize for another team’s setbacks.

“He did a great job of just staying calm, calling the defense, being able to handle run adjustment, pass adjustments, subbing in personnel, matching personnel,” Drinkwitz said. “He dialed up some great pressures, mixed up zone and man. I mean, crud, he held them to 10 points. He did everything good.”

In their first game since losing at Florida on Halloween, it wasn’t the most awe-inspiring night half of offense for the Tigers. But a touchdown pass by Bazelak to Tauskie Dove and a 1-yard TD run by Larry Rountree III was more than enough scoring to complement a swarming defense.

All it took Missouri was one offensive series to shake off the cobwebs from its three-week chasm between games. Following a quick three-and-out possession, the Tigers visited the end zone first on Bazelak’s first touchdown pass in six weeks, a 20-yard back-shoulder fade to Tauskie Dove, who snagged the TD falling on his back into the end zone.

On his eighth carry of the night, Rountree made Mizzou history with an 11-yard run off the left side, giving him 19 yards for the game, just what he needed to pass Zack Abron for No. 2 on the team’s career rushing list and making him the program’s all-time leader for running backs.

“I don't believe it. It's just weird,” said the co-captain, who went on to credit his offensive linemen, past and present, for the feat.

With their season wheezing its last breaths, the Gamecocks made a quarterback change in the second half — a scenario Mizzou fans know too well. It was in 2013 when a hobbled Connor Shaw came off the bench for Steve Spurrier’s Gamecocks and rallied his team to an overtime victory at Mizzou, handing the Tigers their only regular-season loss that year.

MU’s biggest lead that night? 17-0. With the Tigers in front by the same score Saturday, South Carolina turned to Doty, who delivered his team’s first points on the board, setting up a field goal with a few completions and first-down runs.

Coincidentally, Saturday was Shaw’s debut game as South Carolina’s newly promoted quarterbacks coach. He had served as the team’s director of player development until USC fired coach Will Muschamp last Sunday, opening a spot on the coaching staff.

This time, though, the rally ran out of life.

The Tigers showed signs of rust at times Saturday, especially in the second half. Bazelak threw an interception near the goal line in the second quarter. The offensive line struggled to gain traction in the trenches. Rountree and Tyler Badie barely averaged 3 yards per carry. But after a week when another game was in doubt, with a cluster of players and a staff leader back home, the Tigers didn’t pick their nits. Not this night. Not this year.

“I’ve got a couple of screenshots of people that predicted us to only win two games,” Drinkwitz said. “They can have those screenshots back. . . . People counted us out before we got to the fight. There’s no quit in us.”

Up next: 11 a.m. Saturday vs. Arkansas, SEC Network

An offseason roster churn will give the Tigers a new identity in 2021-22 but hasn't dulled Martin's outlook on the future.

Junior guard staying in the SEC to play for Will Wade's Tigers.

But Tigers not underestimating South Dakota in opener Wednesday.