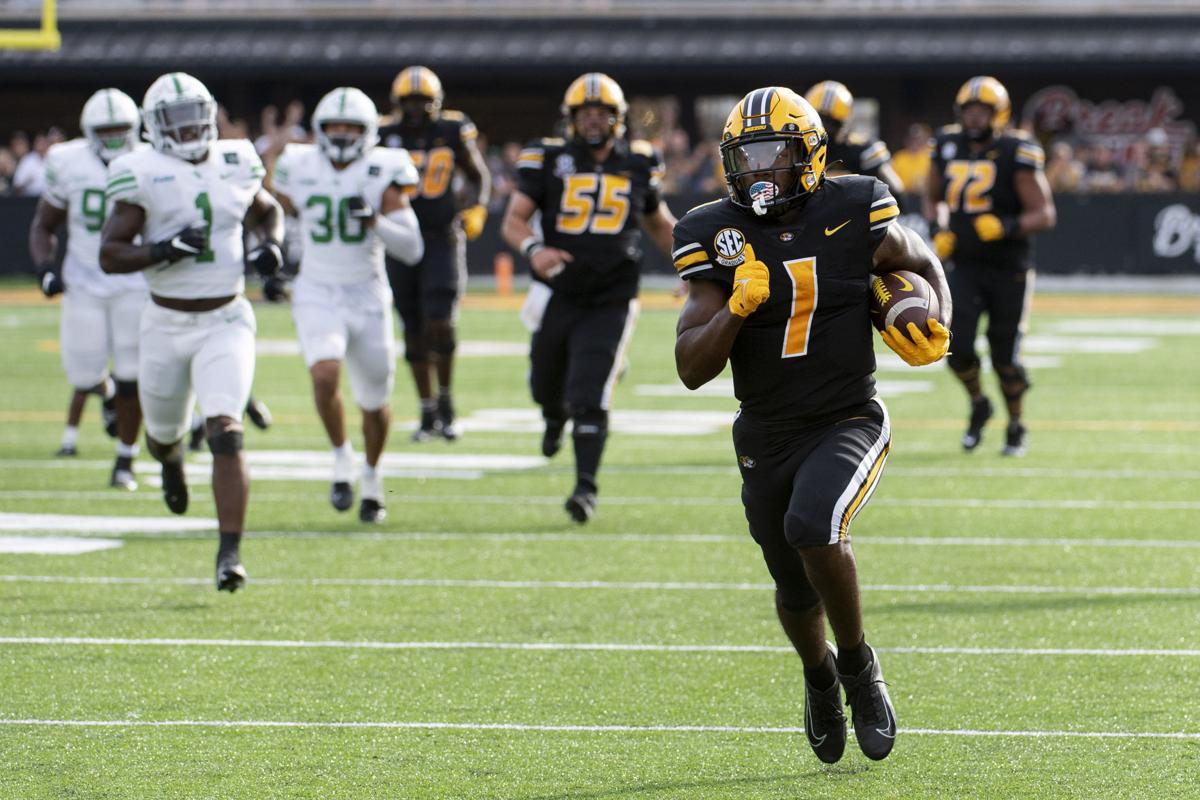 Missouri running back Tyler Badie, front right, outruns the pack as he scores a touchdown during the second quarter of an NCAA college football game against North Texas, Saturday, Oct. 9, 2021, in Columbia, Mo. (AP Photo/L.G. Patterson) 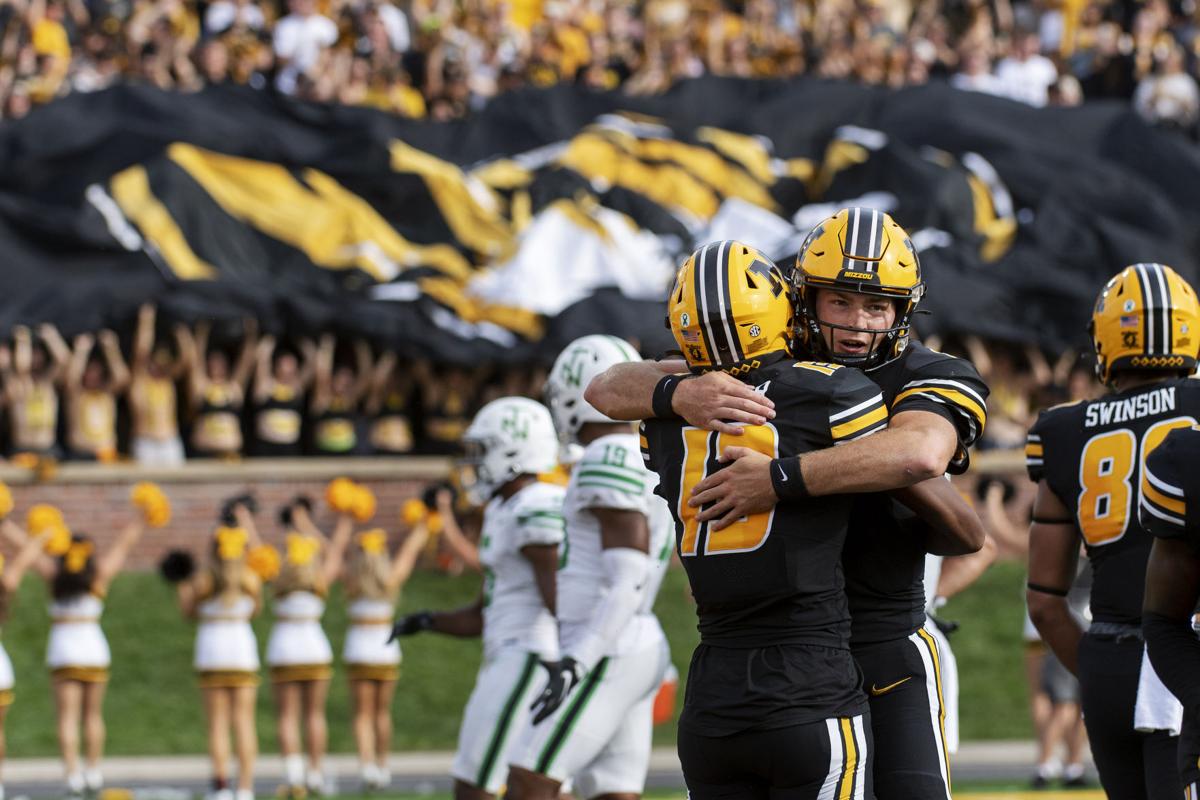 COLUMBIA, Mo. — Missouri’s defense is hardly healed after Eli Drinkwitz applied a tourniquet last week, but there’s a reason he walked out of Memorial Stadium with a victory Saturday.

Tyler Badie plays for his team and not North Texas.

With a game plan designed around Drinkwitz’s renewed commitment to the running game, Badie bullied the Mean Green for a career-high 217 rushing yards on just 17 carries in the 48-35 win. He visited the end zone three times on an otherwise sluggish day for Drinkwitz’s offense.

Mizzou finished plus-three in turnovers and caused some rare havoc along the defensive line, but Badie was the difference as the Tigers (3-3) snapped a two-game losing streak. Drinkwitz scrapped his depth chart in the wake of last week’s 38-point loss to Tennessee, but there was never any doubt about the team’s No. 1 playmaker.

“He’s probably the least talked-about great player in the country right now,” Drinkwitz said. “The guy is playing at an extremely high level. … He refused to be tackled.”

Just ask DeShawn Gaddie. The North Texas defensive back had Badie squared up for an open-field tackle at midfield on the final play of the third quarter. He wrapped Badie in a headlock but couldn’t pull off the takedown. Badie ducked his helmet, pirouetted 360 degrees through a scrum of tacklers and slipped free for a 42-yard gain.

How’d he pull off the magic act?

“Honestly, I just closed my eyes,” he said. “Sometimes good things happen when you close your eyes. I wasn’t down, so I just kept running.”

And with that, he was done running for the day. Drinkwitz rested Badie for the entire fourth quarter and watched his reserves finish the job. Drinkwitz planned to stick with the run Saturday: The Tigers ran the ball a season-high 39 times for 314 yards, the most prolific rushing day in Drinkwitz’s 16 games as head coach.

“We have the ability to throw the ball,” he said, “but there’s just something about that physicality and being able to run the football and establish who you are.”

Thriving in the role he always envisioned while he backed up former teammate Larry Rountree III, Badie continued to state his case as one the Southeastern Conference’s most electric playmakers and Mizzou’s most valuable player through the first half of the season. The SEC leader in touchdowns when the day began added TD runs of 12 and 52 yards and snagged a 3-yard TD catch on a scramble drill just inside of the pylon.

“He’s got a bigger heart than I knew,” Drinkwitz said. “He’s got a big heart. And he loves this football team. He loves Mizzou. He loves competing. He’s playing at a high level. And he knew we needed a spark. That sucker is gritty.”

As for Mizzou’s much-maligned defense, Saturday marked subtle progress for one of the nation’s worst units. Six days after Drinkwitz shook up his defensive coaching staff, replacing D-line coach Jethro Franklin with analyst Al Davis, the Tigers (3-3) forced three turnovers, made 10 tackles behind the line of scrimmage and scored a touchdown on defense for the first time this season. But the Mean Green (1-4) still managed to puncture the Mizzou defense with plenty of chunk plays: six passes of 20 yards or more and 10 10-yard runs. North Texas outgained the Tigers in total yardage 491-474 and edged MU in first downs 21-20.

The Mean Green played catch-up with three fourth-quarter touchdown passes, but on a day Mizzou led by two scores for all but 14 minutes, 12 seconds, Drinkwitz sounded relieved his defense wasn’t the story of the game.

“It wasn’t perfect,” Drinkwitz said, “but we didn’t think we’d transform into the ’85 Bears overnight.”

In front of a homecoming crowd of 46,985, MU’s biggest of the season, Drinkwitz’s defense flipped the field on North Texas’ first possession, getting a diving interception by nickelback Kris Abrams-Draine on UNT’s third play from scrimmage. Mizzou turned that into a Badie touchdown run, a 12-yard scamper off the left side of the line for a quick 7-0 lead. Badie made it 14-0 a series later, grabbing a Connor Bazelak touchdown pass on third down. It was a rare play outside the pocket for Bazelak, who rolled away from pressure and flicked the 3-yard TD to Badie just inside the pylon.

After a North Texas touchdown run, Bazelak broke out the deep ball, connecting with J.J. Hester on a 41-yard touchdown pass.

As the Tigers muddled around on offense in the second half, the defense visited the end zone for the first time in 2021 when defensive end Trajan Jeffcoat tipped a pass to tackle Mekhi Wingo, who rumbled 40 yards on the interception return. Those points would prove valuable as North Texas stayed on the attack late.

But not as valuable as Mizzou’s man in the No. 1 jersey. The Tigers’ first-half MVP left no doubts Saturday.

“I know my goal at the end of the day is to be the best running back in this conference and the NCAA,” Badie said. “Period.”

Drinkwitz: 'This program is going to be built on competition ... This ain't Ted Lasso.'

A look back at the snap counts, PFF grades for Mizzou's 48-35 win over North Texas.

Missouri running back Tyler Badie, front right, outruns the pack as he scores a touchdown during the second quarter of an NCAA college football game against North Texas, Saturday, Oct. 9, 2021, in Columbia, Mo. (AP Photo/L.G. Patterson)