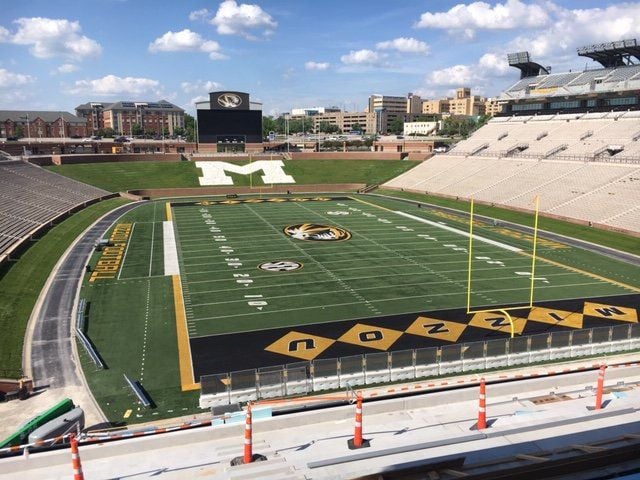 A view of Faurot Field from the balcony outside coach Barry Odom's new office at the south end zone complex being added to Missouri's Memorial Stadium. (Post-Dispatch photo by Dave Matter)

Missouri hopes to put more fans in the seats at Faurot Field this coming season, here seen from the balcony outside coach Barry Odom's new office at the south end zone at Memorial Stadium. (Post-Dispatch photo by Dave Matter)

Average attendance at Southeastern Conference football games has declined each of the past three years, and while no one’s going to feel sorry for programs that still rank among the richest in college football, schools continue to scramble for solutions to boost dwindling numbers at the gate.

SEC home attendance has fallen about 6 percent since 2015, a drop-off that follows a national trend that’s seen home attendance fall off at 4.6 percent across all Football Bowl Subdivision games.

From 2015 to 2018, average announced football attendance dropped at 12 of 14 SEC schools, with everyone but — go figure — Alabama and Georgia seeing smaller crowds over the past three seasons. Since 2015, four SEC schools have seen a decline by more than 10 percent: Kentucky (10.1), Arkansas (11.1), Vanderbilt (12.7) and Mizzou, at a whopping 21 percent decrease.

Missouri’s Barry Odom might be more attuned to the issue than most of his peers in the SEC. For one, Odom has a bonus clause in his contract tied directly to ticket sales. Any year that MU makes more than $11.7 million in ticket revenue, Odom earns a bonus equal to 20 percent of the amount over that threshold. Mizzou hasn’t made $11.7 million in football ticket revenue since the 2015 season, when MU hauled in nearly $13.3 million. In 2014, the last time Mizzou won the SEC East Division, the program made nearly $16.5 million in ticket revenue. That total plunged to $10.5 million in 2017, according to the most recent data available.

Odom’s had a front row to the empty seats at Memorial Stadium, a trend that began in 2016, some of that a fallout from the tumultuous 2015 season, when the football team briefly boycotted team activities in support of racial protests on campus. While athletics director Jim Sterk has worked to reconnect relationships across the state — MU has lifted its donor base above 10,000 for the first time — and Odom has come through with consecutive bowl seasons, the Tigers continued to play in front of smaller crowds last fall, with average attendance dipping to 51,466, down from 65,120 in 2015, Gary Pinkel’s final season as coach. (Memorial Stadium’s capacity was limited to 60,000 last year while construction crews worked on the south end zone complex.)

For years Mizzou fans bellyached about the Big 12 Conference’s limited TV exposure, but now that every game is televised on the SEC’s more expansive platforms, that TV exposure can work against programs struggling to fill seats.

“It’s something we all better be aware of,” Odom said at last week’s SEC media days in Hoover, Ala. “It’s a national trend and not just in football. You get the best clarity of video (on TVs) and you can sit in the comfort of your own home. Our administration at Mizzou, we’ve had open conversations about it. We understand what we need to do to continue to improve that.”

SEC commissioner Greg Sankey’s only mention of attendance in his opening remarks in Hoover last week noted that the SEC led the country in attendance again last season — for the 21st consecutive season. Despite the decreased numbers, the SEC landed seven teams in the nation’s top 13 for average home attendance last year. The numbers reflect the nation’s biggest moneymakers, too: In USA Today’s annual checkup of college sports’ top revenue producers, the same seven ranked among the nation’s top 11.

Five SEC schools have expanded their stadium capacity since conference realignment pushed the SEC to 14 teams in 2012. Meanwhile, Kentucky and Missouri have gone the opposite direction. When UK renovated Kroger Field in 2015, the school dropped capacity from 67,000 to 61,000. Mizzou’s new south end zone complex will introduce new seating areas for the 2019 season, but Memorial Stadium’s capacity will be capped at 62,621, down from 71,168 that stood as capacity from 2014-17. MU initially designed for capacity at 65,000 when the south end zone construction project first launched but have since changed plans.

Rather than rely solely on bigger crowds to help recapture revenue, the idea is to enhance the game-day atmosphere and drive revenue with premium seating areas and other conveniences.

“With the south end zone complex for us, the game-day environment for our fans is going to be as good or better than it’s ever been at Mizzou,” Odom said. “The sound system, concessions, all those things.”

“Obviously, I have to do my job and play winning football,” he added. “I’m proud of the fans at Mizzou. The state of Missouri is a group of folks that care deeply about our university. But I know we’ve got their support. What the numbers will be (for attendance), I think they’re going to continue to grow. But we’ve also got to step back and take a look from a big scope nationally on how can we continue to improve attendance because it’s an issue everyone is facing.”

As of late June, MU had sold about 20,000 season tickets. Renewal rate of season ticket sales stands at 85 percent, the school’s highest since 2014. For the upcoming season, Mizzou has reduced ticket prices for various sections around the stadium and significantly reduced costs for students.

Another solution Mizzou continues to explore is alcohol sales. This summer, the SEC membership voted to end its long-held prohibition of alcohol sales in general seating areas and will allow schools to sell beer and wine at games under certain guidelines. While some SEC schools have already announced they won’t partake in alcohol sales, Sterk is working to make that possible for the upcoming season, starting with the Sept. 7 home opener against West Virginia.

As long as Sterk and other campus leaders believe that move is best, Odom is all but ready to tap the first keg.

“I’ll be on board with having a great game-day experience,” Odom said. “If that’s something we decide to have at our stadium at Faurot Field, then I’m all in.”

While average football attendance across the Southeastern Conference has steadily decreased at a small rate the last few years, the Missouri football team saw a sharp decline after the 2015 season.

Missouri returns one of the SEC's best pass-blocking left tackles along the offensive line.

Mizzou back in Big 12/SEC Challenge, plays at West Virginia

Tigers back in the 10-game event for the first time in five years.

We're staying on defense as we count down the most important players for the 2019 Missouri Tigers ...

It's official: Mizzou will sell beer and wine at football games this season

In accordance with SEC's new alcohol policies, the university will tap the kegs and uncork the wine in public seating areas at Faurot Field.

A view of Faurot Field from the balcony outside coach Barry Odom's new office at the south end zone complex being added to Missouri's Memorial Stadium. (Post-Dispatch photo by Dave Matter)

Missouri hopes to put more fans in the seats at Faurot Field this coming season, here seen from the balcony outside coach Barry Odom's new office at the south end zone at Memorial Stadium. (Post-Dispatch photo by Dave Matter)