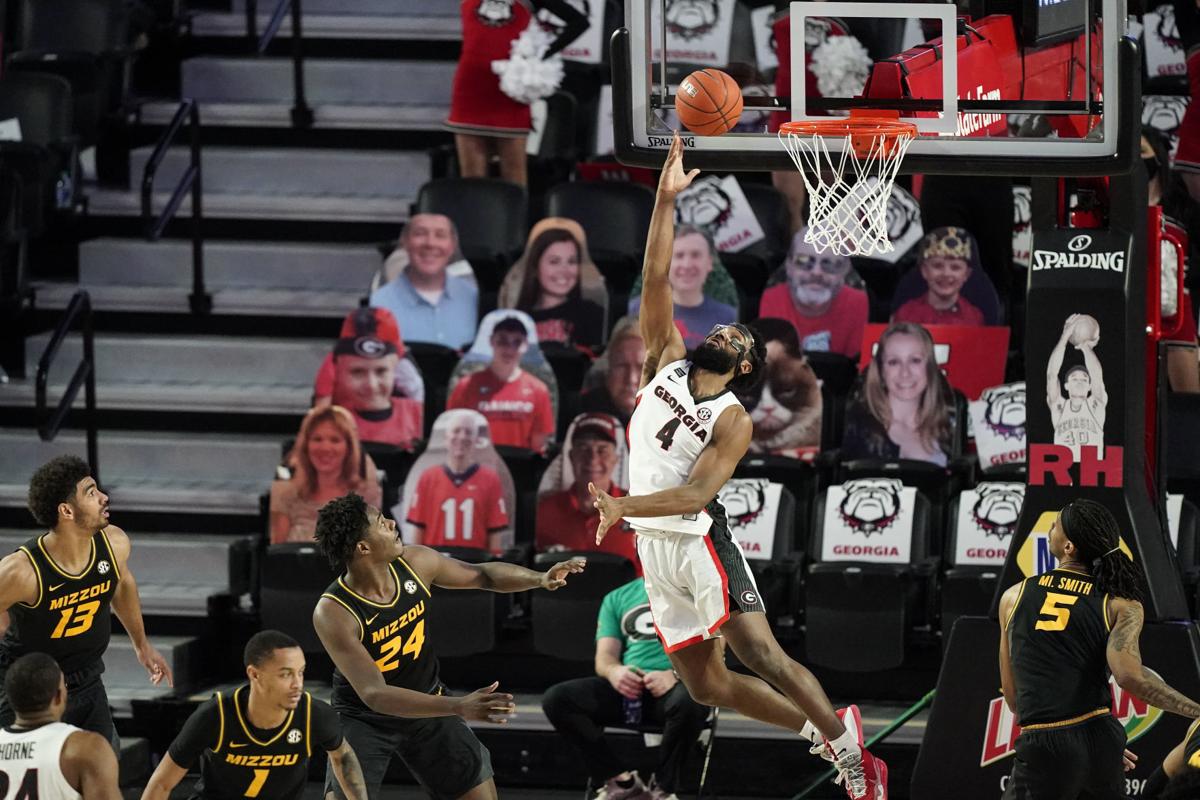 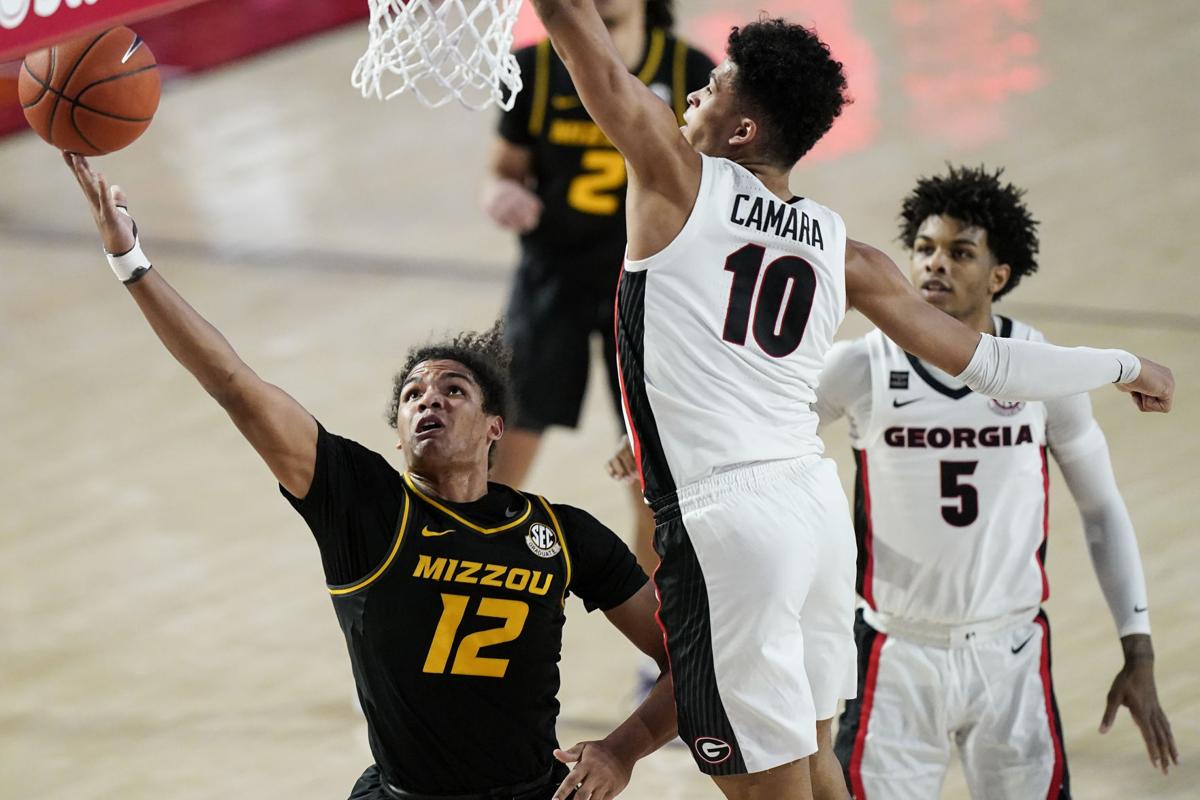 Back at Georgia’s Stegeman Coliseum for the first time since clobbering the Bulldogs by 25 points two years ago, Missouri was on pace Tuesday to match that blowout.

Then the second-half letdown happened, again.

Playing without senior center Jeremiah Tilmon for the second straight game, the No. 20 Tigers soared to a 13-point lead three minutes into the second half only to fall apart like so many times this season.

The recurring nightmare happened again: Georgia unleashed a 25-7 run and rode that surge to an 80-70 victory in Athens.

The loss was the Tigers’ third straight as they began a pivotal two-week stretch against four teams behind them in the Southeastern Conference standings. The Tigers dropped to 13-6 and back to .500 in SEC play at 6-6.

It was MU’s fourth SEC game this season that the opponent trimmed a second-half double-digit point deficit into a one-possession game. The Tigers survived comebacks against Kentucky and Alabama but not against Mississippi State and now Georgia.

“You put yourself in a position to win on the road you got to find a way to win,” Tigers coach Cuonzo Martin said.

Unlike last week’s loss at Mississippi, Martin wasn’t critical of his team’s effort. The Tigers didn’t lack grit, he said. But they lost their composure with costly live-ball turnovers and missed layups that the Bulldogs turned into momentum-shifting points.

“You’ve got to stay strong,” he said. “You’ve got to finish the game and stay strong. . . . I thought we had a great game plan and had great energy. We just couldn’t maintain for some reason and couldn’t execute what we tried to do offensively.”

A late breakdown embodied the Tigers’ latest meltdown: With 1:06 left and UGA ahead by 10, Xavier Pinson fumbled the ball before getting to halfcourt, then watched K.D. Johnson snatch it away and score on an uncontested dunk. Mizzou’s Mark Smith promptly turned the ball over on the inbounds pass. The Tigers turned the ball over 11 times in the second half after just two giveaways in the first half.

“I think we kind of stopped being aggressive,” MU forward Parker Braun said. “We had a lot of mismatches, and I think we kind of took our time in the first half and we took advantage of them. The second half we got sloppy, had a lot more turnovers, and we had bad transition defense and let it get away from us.”

Tilmon has been on a leave of absence following a death in his family. He missed his first game of the season Saturday in MU’s overtime loss to Arkansas. The Tigers next play Saturday at South Carolina in a rematch of last month’s 81-70 Mizzou win.

On Tilmon, Martin said, “I guess he’s doing as well as he can do right now when you lose a loved one. We expect him back soon.”

For the Tigers, the plunge continues: In six days Mizzou has fallen from second place to seventh in the SEC standings. It’s the kind of free fall that could soon have Mizzou on the  NCAA Tournament bubble. Can this team snap out of its funk?

"Without question,” Martin said. "As long as you have the effort. … This game, a quick shot here, a couple of easy misses around the rim takes the momentum out of you. Then you get the live-ball turnovers. I thought we had what we needed to (have) to win the game."

Justin Kier led five Georgia players in double figures with 15 points. UGA (13-8, 6-8), once plummeting toward the bottom of the SEC standings, snapped a two-game losing streak and in the second half played like the team with more at stake.

“We've come from behind before, but this is a really, really good team that's ranked for a reason,” Georgia coach Tom Crean said. “I think to be able to come back like that … it wasn't like they were sabotaging. They're experienced. They're playing hard. They weren't self-inflicting their own wounds. They were really going, so we had to earn it.”

“I am a big fan of what Missouri does,” Crean added. “I love the way they play. That is why it is extra special to have a win like that because you know you have to earn it. They are not going to give you the game. You have to truly earn it.”

After Alabama scorched Georgia for 18 3-pointers on Saturday, the Tigers seemed intent on trying to duplicate that strategy, hoisting 10 3s by the second media timeout. One problem: They connected on only two. For the game, Mizzou made just six of 26 shots from behind the arc. Pinson and Dru Smith were two-of-12 combined.

Coming out of the timeout, Mizzou put together a 7-0 run to regain the lead on a Pinson floater. Then the Tigers settled in with a more sustainable approach and feasted on the Brown and Braun two-man game.

First, Braun fed Brown out of the low post for a layup. Then, after a couple Braun free throws, Braun soared through the lane and dished a no-look pass to Brown for another basket, part of an 11-0 run to push the Tigers in front for the rest of the half. All the while, MU resisted hoisting shots from 3 and tried to take advantage of size matchups inside.

Brown went on the attack again, first with a post-up around a smaller defender, then another slick drive along the baseline, all part of a 17-4 run. MU took a 37-33 lead into halftime, setting up another second half for the Tigers to show some resolve and protect a lead.

In the second half Georgia came out flat first, committing turnovers on its first three possessions. The Tigers outscored Georgia 11-2 to open the half as the Bulldogs went nearly six minutes before their first field goal. Then came the eruption.

Georgia sank eight of 11 shots during a seven-minute blitz and exploited a toxic blur of Mizzou quick shots, careless ball-handling and missed shots at the rim. Georgia drained four 3-pointers during the rally by three different players. Kier’s 3-pointer in transition put UGA in front 60-55 to punctuate the 25-7 run. Georgia scored 10 points in transition during the stretch, including three 3-pointers on the break.

Martin called a timeout with 7:22 left, but the avalanche was already hurtling down the mountain by then.

“We’ve got to realize we can’t call a timeout every possession,” Braun said. “We’ve got to take it in our hands. We can’t put our heads down. We can’t just let them keep scoring on us and scoring on us. We’ve got to buckle down and really rely on our defense, because that’s what this program and organization takes pride in.”

The Tigers caught their breath and responded, first with a shot clock-beating 3-pointer from Braun. Then Georgia went back on the attack and regained the lead with six points on two straight possessions, including another wide-open 3-pointer by Sahvir Wheeler. The Tigers went nearly five minutes between field goals down the stretch in their latest but perhaps most painful second-half collapse.

Where does this team go next?

“Everyone in there wants to figure out what’s wrong,” Brown said. “No one’s in there moping about the loss. We’re trying to figure out what to do next. What’s the next step? We want to get better and be the team we know we can be.”

Former Chicago Sun-Times player of the year should upgrade MU's athleticism on the perimeter. Can he become a reliable 3-point shooter?

Blitz at peace with decision to leave Mizzou soccer

For just the second time in the women's soccer program's 25 years, Mizzou is searching for a new head coach.

The Tigers are 32-10 heading into a pivotal weekend showdown at first-place Arkansas.

Bring your Tigers football, basketball and recruiting questions, and talk to Mizzou beat writer Dave Matter in a live chat at 11 a.m. Thursday.