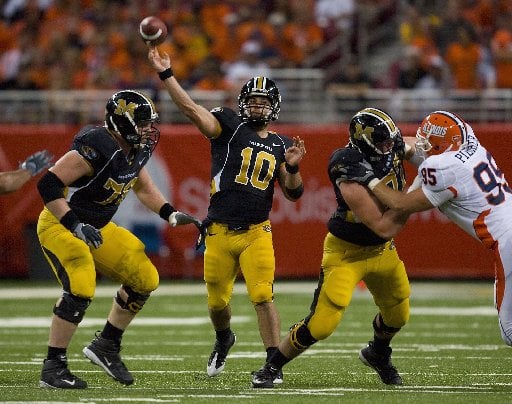 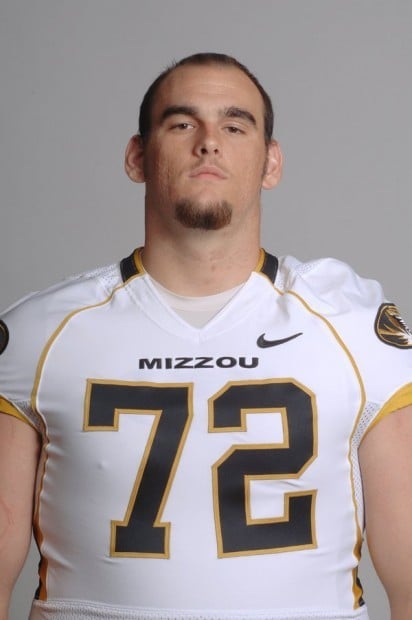 The senior-citizen jokes are old hat for Elvis Fisher, so much that he's even willing to poke fun at himself. The receding hairline made that inevitable long ago.

Spending a sixth year at Missouri was bound to increase the taunting, so the Tigers' elder statesman joined the banter via Twitter a few months back.

"I've been getting old-man jokes since I've been here because I'm bald," he said. "I love it. They're funny to me. I dish it out well and I take it well."

Fisher didn't plan to spend this much time in Columbia. But when he suffered a ruptured patellar tendon in his left knee last August, a sixth year of eligibility became an option, and eventually the NCAA approved his petition.

Now, with little fanfare, the 6-foot-5, 295-pounder is progressing toward possibly playing every game of his career at left tackle for the Tigers.

On Tuesday, he took off the red shirt, which cautions teammates not to hit, and went through live drills for the first time. After doing the same Thursday, he voiced hope that he might participate in today's scrimmage.

"It's going good, really good," Fisher said. "This was the first week doing everything full speed. (Thursday) was more about trusting it, more planting on it and it feels darn near close to 100 percent."

When the injury occurred, Fisher had started 40 consecutive games and was pursuing the school record of 50 consecutive starts. But that dream ended when he collapsed during a blocking drill without anyone hitting him. And he heard his knee pop.

The worst part of rehab, he said, was regaining range of motion. Now, it's all about getting the leg back to full strength, a process that will continue through the spring and summer.

"I haven't talked to the trainers about playing yet. It's kind of like a game-time decision," Fisher said. "If there's an opportunity I can get in, that would be great. Based on how it feels during practice, I could. If I could do a couple of series, I'm fine with that."

However, fans who follow the veteran on Twitter received a scare this week when Fisher "announced" his intention to skip the sixth year, writing "Nothing personal, I'm just ready to move on." The post came April 1.

He wasn't about to quit after going through several weeks of spring drills. Before springing the April fool's joke, Fisher had taken to Twitter with a series of posts under the topic "6th year problems," such as "My body is in a constant state of pain that no advil can cure" and "All my friends from back home all have steady jobs and no more spring breaks."

But there was a time when he wasn't sure about taking the extra year.

"There's always a question," he said. "They delayed the process forever. I didn't know what I was doing. Everyone was harping on me about what I was going to do. I didn't know if I got (the sixth year) what I would do. Mentally, I wanted to know."

When he found out, the decision to stay came quickly.

He arrived in Columbia in 2007 rated as the 53rd-best offensive tackle prospect in the country by Super Prep. It wasn't the type of rating that pointed to a major initial impact, and Fisher redshirted his first year.

He was an integral piece of one of the country's best offenses, a unit that ranked 16th for fewest sacks allowed per game.

Fisher built on that reputation the next two seasons and was primed for a big senior year when he was injured. Now, he's getting ready to protect his third starting quarterback at Mizzou.

Fisher still believes the record for consecutive starts can be his.

"I was excited about it," he said. "It's a record I wanted to get because longevity-wise it's a great record. I guess if I start all these games I'll have an asterisk next to it."

The St. Louis native rejoined Tigers' staff in 2021 after four years in MLB organizations and had battled kidney disease.

Ticket sales plunged under limited seating capacities as MU athletics operated at a deficit for the fifth straight year.

Peat, a Columbia native, was Stanford's leading rusher in 2021 and led the Pac-12 in kickoff return yards.

Texas State coordinator will take over Mizzou's receivers in 2022.

Baker, who coached with Drinkwitz at Arkansas State and last year coached LSU's linebackers, will handle Mizzou's safeties in 2022.

Graduate transfer started 10 games for North Carolina in 2020, missed most of 2021 with upper-body injury.