Become a Member
Read Today's E-edition
Share This
Mizzou upsets No. 15 Alabama behind Brown’s career day
0 comments
Share this
1 of 3 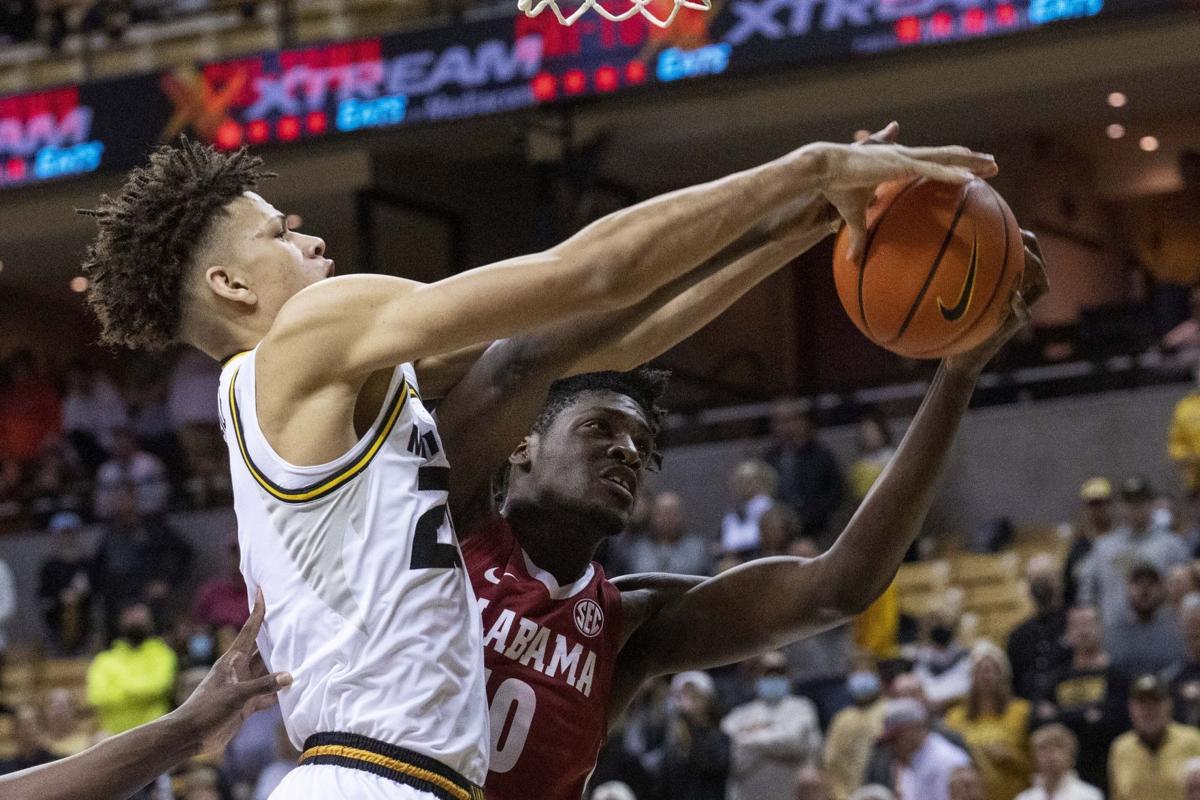 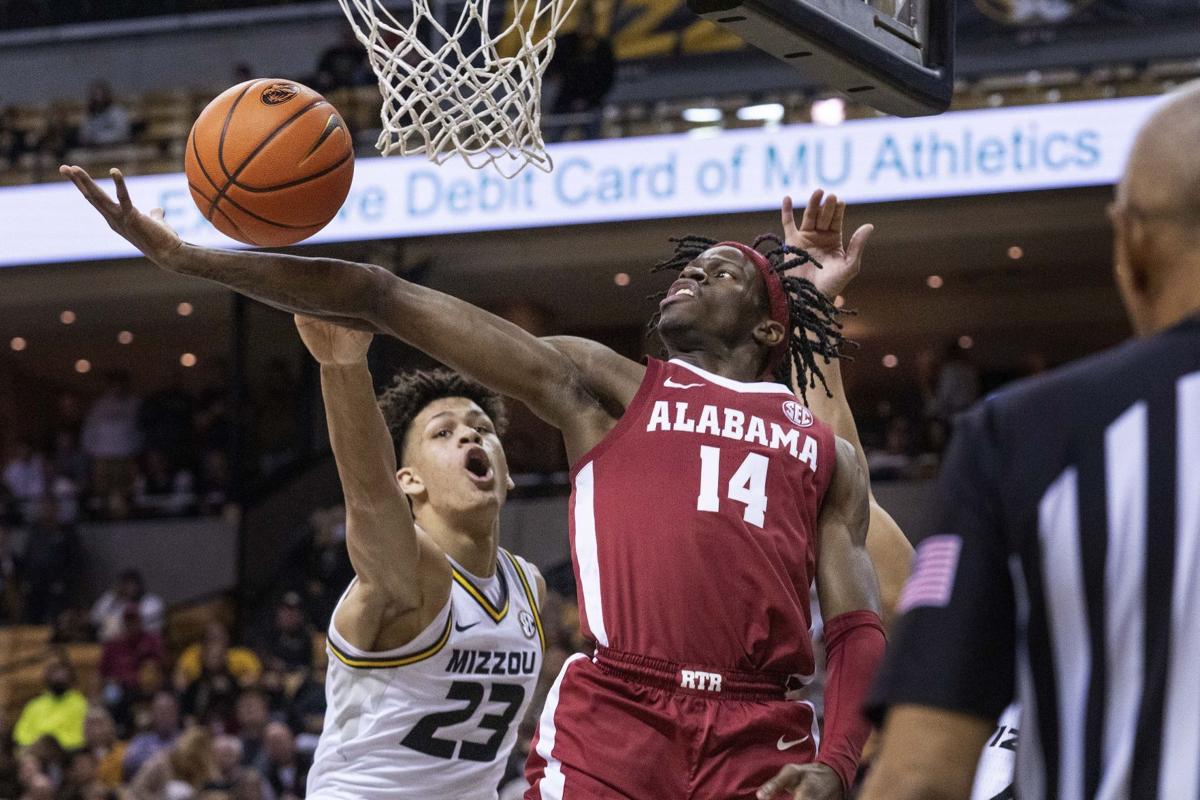 Alabama's Keon Ellis, right, loses control of the ball as he shoots in front of Missouri's Trevon Brazile, left, during the first half of an NCAA college basketball game Saturday, Jan. 8, 2022, in Columbia, Mo. (AP Photo/L.G. Patterson)

COLUMBIA, Mo. — The Missouri basketball team had enough players in COVID protocol to postpone Wednesday’s game and didn’t have enough available to practice five on five. But Cuonzo Martin made the most of the Tigers’ time together.

It wasn’t fun, at least not for the players.

“It took me back to my old school days of just really getting after it, which I really enjoy,” Martin said Saturday, stretching out his surgically repaired creaky knee that paid the price in MU’s short-handed practices. “That’s probably why my knee’s hurting. But that’s what it takes. You’ve got to dig deep.”

How deep did the Tigers dig?

“A lot of running,” Kobe Brown said. “A lot of physical drills.”

“A lot of competing,” Boogie Coleman added. “A lot of consequences if you lose.”

The grueling sessions paid off Saturday. Back from their COVID pause but still undermanned, the Tigers outlasted No. 15 Alabama 92-86 at Mizzou Arena, their first victory over a ranked opponent since last year’s home win over the same Crimson Tide. Playing for the first time since a Dec. 29 loss at Kentucky and down two regulars in the backcourt, the Tigers (7-7, 1-1 SEC) put together their most prolific and efficient offensive performance of the season, led by Brown’s career-high 30 points, plus 13 rebounds and four assists.

Mizzou matched its season high with nine 3-pointers on 24 attempts and finished with the season’s second-best shooting percentage from deep (37.5). The advanced metrics were excellent, too. MU scored 1.33 points per possession, the team’s best efficiency mark this season, second-best in an SEC game in Martin’s five seasons and sixth-best overall under Martin.

“Sharing the ball,” said Martin, whose team had a season-high 19 assists, the Tigers’ most in a regulation game since December 2019. “You have to share the ball. But really what we’re trying to drill into our guys more than anything (is) don’t get consumed if your shot isn’t falling. Don’t allow that to defeat you.”

Through the season’s first two months, the Tigers were barely competitive against the best teams on the schedule, losing to Florida State, Kansas, Illinois and Kentucky by an average of 28 points. With Alabama (11-4, 2-1) in town, favored by 13½ points at tip-off, another blowout seemed probable, especially with guards Amari Davis, the team’s second-leading scorer, and freshman point guard Anton Brookshire, both out for COVID protocols.

But the Tigers roared out of the locker room to start both halves, opening the game with a 9-0 surge. The Crimson Tide recovered to grab a 43-40 halftime lead, but Mizzou erupted again, scoring on its first nine possessions of the second half. The Tigers scored 32 points in the half’s first nine minutes.

Lately, Martin said he’s had to “put some restrictions on guys” from shooting 3-pointers and instead emphasized driving the lane. That paid off Saturday as the Tigers consistently looked to create scoring chances around the rim rather than settle for early 3s. Coleman finished with 18 points and six assists, while DaJuan Gordon and Javon Pickett both added 15 points.

Saturday’s unsung hero was another Brown, Kobe’s younger brother Kaleb. Stepping in for Davis and Brookshire, the freshman played a career-high 18 minutes, and while he didn’t fill up the stat sheet — two points, two assists, three rebounds — he calmly directed the offense and fought through bodies on both ends of the floor.

“I thought he had a tremendous floor game facilitating, making plays, directing traffic, defending, being physical without fouling,” Martin said. “I’m so proud of him, because oftentimes you can lose yourself when you’re not playing. But he stayed the course, had great energy. He brings his hard hat to work every day.”

“I’ve always known Kaleb could do that,” his big brother added. “He’s just a gifted ball-handler. He’s not really big on points. He’ll get them if he can but he just wants to get guys open … get assists and do what he can to win.”

Just as the older Brown approached his career-high in points, he picked up his third and fourth foul on back-to-back possessions and headed to the bench with 10:04 left in the game. But one of the nation’s worst 3-point shooting teams connected on two pivotal 3s late in the half by Gordon and Coleman to keep the Tide in chase mode.

Still, Jaden Shackelford’s 3-pointer with 15 seconds left got Alabama within four, and while Coleman missed two free throws on the next possession, the ball bounced out of bounds off an Alabama defender with 10 seconds left. The Tide had to foul Kobe Brown on MU’s next two possessions and he sank all four free throws to clinch the win.

As the buzzer sounded, Martin spun around toward his bench and pumped his fist. For a team that hadn’t experienced many tangible rewards through the season’s first few months, the new year couldn’t have started better.

“I told our guys don’t get don’t get consumed with what happened in the past as far as learning and growing and taking your lumps,” he said. “But learn from it. Learn from it and endure that pain and growing as a team. But also enjoy that because it makes you better if you don’t give up, you don’t quit. We have ways to go as a team. But I think we’ve made tremendous strides.”

Hogs up nextFrom here, the Tigers travel to Arkansas (10-5, 0-3) on Wednesday. The Razorbacks, an early candidate for the SEC’s most disappointing team, have lost five of their last six games, including Saturday’s contest at Texas A&M.

“I’ve always enjoyed going on the road, whatever that means,” Martin said. “If you’re applauding and praising and you’re in awe of beating a ranked team, that means we still have ways to go. I know we’ve grown as a team. And we said we’re not where we need to be as a team. But you have to understand, you have to believe that you’re good enough and don’t get consumed with a team having a number in front of them. And that’s a very talented (Alabama) team that has the tools and the talent to win it all. So I’m not saying that. But you have to understand you’re playing basketball at the highest level in arguably the toughest league in America when you’re talking about talent, athleticism and skill. So every night you have your work to do.”

Tigers start strongThe shorthanded Tigers didn’t have the sluggish start some might have feared, opening the game with a 9-0 spurt. Mizzou unlocked Alabama’s zone defense early and found Brown open at the elbow for three early unguarded baskets. As the Tide went scoreless on their first five possessions, the Tigers connected on 8 of their first 15 shots and turned the ball over just once through the half’s first 10 minutes.

“You can’t turn back the hands of time, but if you’re able to make shots, then your spacing is better,” said Martin, who was out with COVID during the Kentucky game. “I mean, look at all the best teams. They make shots and that’s why their spacing is good. You don’t make shots, then the defense tightens up and now you struggle.”

Back to back Coleman turnovers led directly to five Alabama points, but Coleman bounced back with a shot-clock beating 3-pointer off a great find from Brown on the baseline, keeping the Tigers within a possession of Alabama.

A few series later, Brown muscled through traffic to draw a foul right before the buzzer and earned two free throws at the four-minute mark, sinking both to trim Bama’s lead to 33-31.

Brown went to the bench with his second foul with 2:50 left in the half, but after falling behind by eight a couple times, the Tigers finished strong with a couple Gordon baskets and took a 43-40 deficit into halftime.

It was MU’s best offensive half against a quality opponent this season — until the day’s second half.

Martin salutes crowdMU’s announced attendance of 10,903 seemed higher than the actual crowd on hand, but with the outcome on the line late, Mizzou Arena was as loud as it’s been all season.

“We’ve got to give Missouri a lot of credit coming off a COVID pause and being down a couple of guys,” he said. “They played a lot harder than we played. That may have been our worst performance of the year. I told our guys going into the game this was going to be a leadership test, maturity test to see where we are at coming off two big wins against Tennessee and Florida. Last time we had two big wins was Gonzaga and Houston, and we did not play well on the road at Memphis. Same thing happened here, two big wins and we did not play well on the road. We’ve got to get some leadership. It starts here with me. I’ve got to figure out how to get these guys motivated and play a little harder because the effort was drastically different between the two teams tonight and it cost us the game. If we are going to try and compete for an SEC Championship, we got to win games on the road when we’ve got opportunities to win them. Tonight, we probably should’ve won on the road and had opportunities, but just weren’t able to take advantage. It’s a disappointing loss and we need to look ourselves in the eye and find a way to play tougher and harder than we did tonight.”

The St. Louis native rejoined Tigers' staff in 2021 after four years in MLB organizations and had battled kidney disease.

Ticket sales plunged under limited seating capacities as MU athletics operated at a deficit for the fifth straight year.

Peat, a Columbia native, was Stanford's leading rusher in 2021 and led the Pac-12 in kickoff return yards.

Aaron Fletcher, the team's cornerbacks coach this past season, leaving for Arizona State.

Texas State coordinator will take over Mizzou's receivers in 2022.

Graduate transfer started 10 games for North Carolina in 2020, missed most of 2021 with upper-body injury.

'Man, I didn't want to let him down.' How Gary Pinkel instilled loyalty at Mizzou

What made working for the soon-to-be Hall of Famer so unique? For his former staffers, it started with organization, loyalty and player development.

Watch now: Blues are good at coming back from behind

Watch now: Blues are good at coming back from behind

Alabama's Keon Ellis, right, loses control of the ball as he shoots in front of Missouri's Trevon Brazile, left, during the first half of an NCAA college basketball game Saturday, Jan. 8, 2022, in Columbia, Mo. (AP Photo/L.G. Patterson)