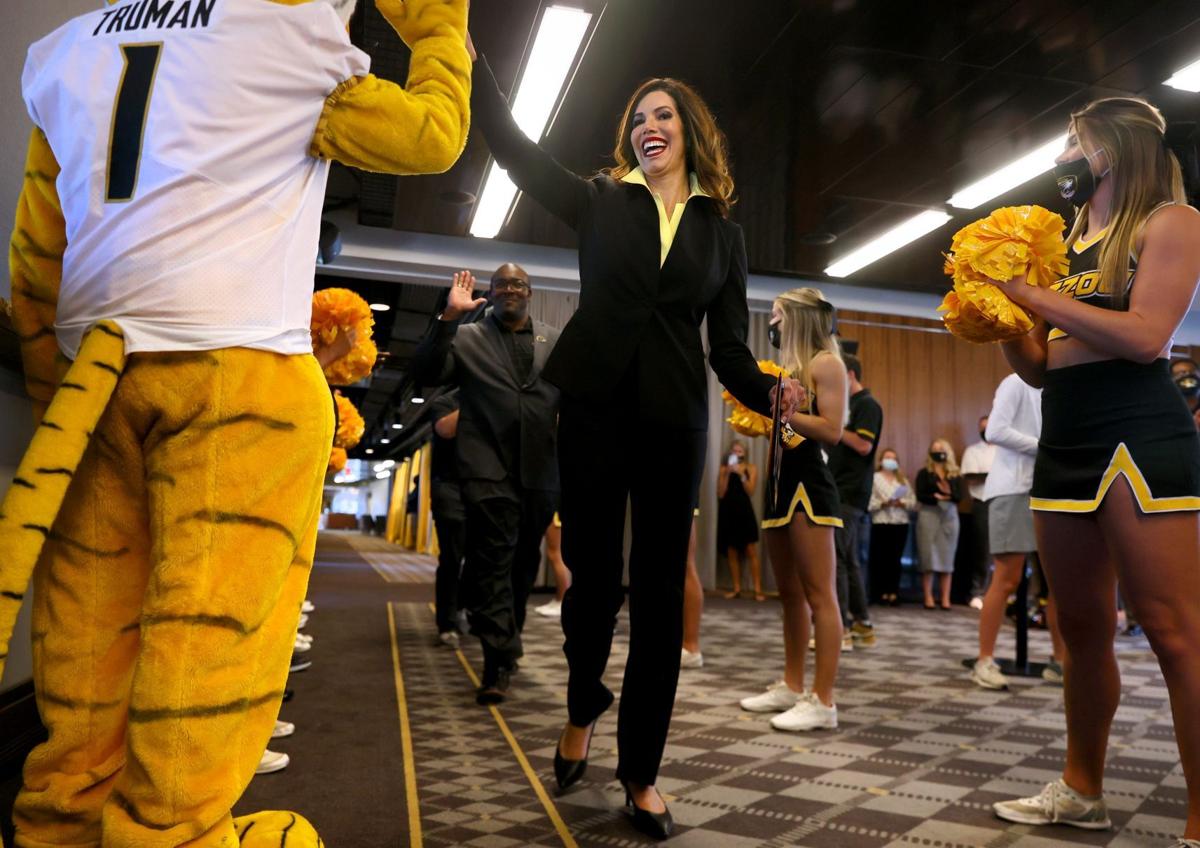 Desiree Reed-Francois gives a high five to Truman on Wednesday, Aug. 11, 2021, as she is introduced as the University of Missouri's 21st Athletic Director at Memorial Stadium in Columbia, Mo. Reed-Francois is the first woman to hold the position. Photo by Christian Gooden, cgooden@post-dispatch.com 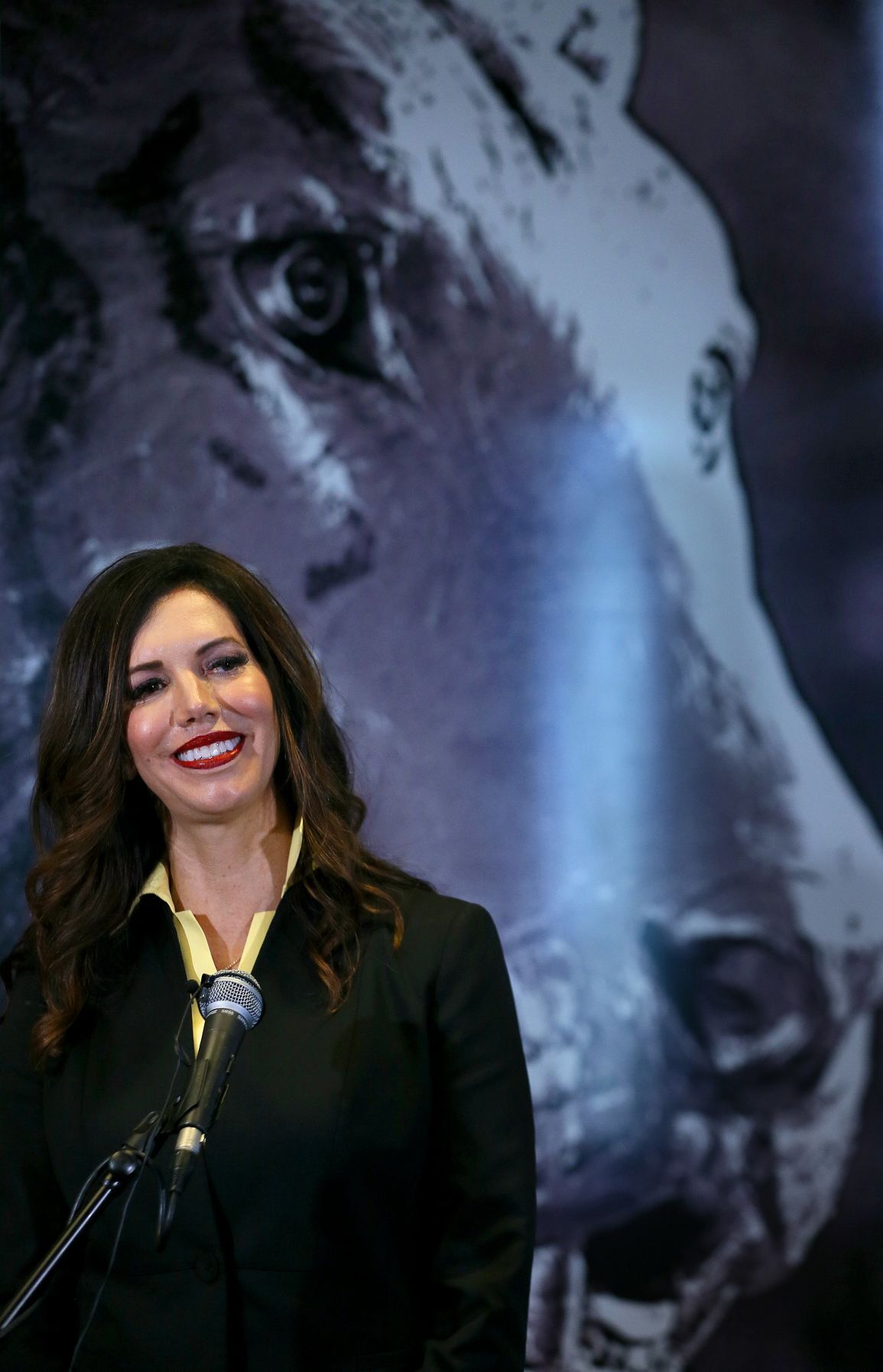 Desiree Reed-Francois, speaks to media on Wednesday, Aug. 11, 2021, outside the chancellor's suite at Memorial Stadium after she was introduced as the University of Missouri's 21st Athletic Director in Columbia, Mo. Reed-Francois is the first woman to hold the position. Photo by Christian Gooden, cgooden@post-dispatch.com

COLUMBIA, Mo. — Five years to the day that Missouri introduced Jim Sterk as the school’s new athletics director, MU went through the same routine Wednesday, parading his successor through the same room at Memorial Stadium as the pep band played the same fight song and cheerleaders and Truman the Tiger again greeted the new AD in front of a throng of supporters and media.

Desiree Reed-Francois, the first woman hired to run Mizzou athletics and the highest-paid in that position, flew Tuesday from Las Vegas to Columbia and on Wednesday shot for the moon.

From the top down, Mizzou’s messaging took on a new tone. University President Mun Choi started the event putting the Southeastern Conference and Mizzou fans on alert.

“Business as usual goes out the window with our new athletics director,” he said.

Reed-Francois, 49, armed with a six-year contract paying her $800,000 per year, used the word “championship” nine times in her introductory news conference — at a school that’s won just two league titles since joining the SEC in 2012, both in volleyball.

“We compete in the best conference in the country,” said Reed-Francois, who comes from UNLV, where she had been AD since 2017 and had just signed a four-year extension in April. “We we should regularly compete for SEC championships, which will put us in the hunt for national championships. But ultimately, I know this is the Show-Me State. And I know that our actions and our results will speak louder than my words. But I know this league. And I know we can do this. We can be one of the nation’s best in everything.”

That lofty ambition also explains the rationale behind Mizzou’s decision to part ways with former Sterk, who last month agreed to leave his post with two years left on his contract — in exchange for $1.5 million. Speaking publicly Wednesday for the first time since making that decision, Choi made it clear university leadership wanted Sterk out of office.

“Looking 10 years out into the future, I knew, the board knew, that we needed a different direction,” Choi said.

In his opening remarks Wednesday, in front of a crowd that included three of the five living Mizzou football head coaches — Eli Drinkwitz and former coaches Gary Pinkel and Bob Stull — plus former AD Mike Alden and most of MU’s current coaches, Choi noted that Mizzou athletics will no longer think in terms of “going from good to great.” Perhaps that was a coincidence, but in his opening statement five years ago, Sterk talked about taking MU from “good to great.”

For Choi and his new AD, that’s no longer the standard.

“At the end of the year, there’s only one champion standing,” he later told a smaller group of reporters. “And that’s where we want to be. It may take us three, four, five years to get there. We can’t do it with a snap of a finger. It takes a sustained commitment.”

That’s where Reed-Francois enters the scene. Choi and his search committee started with 30 potential candidates and trimmed that list to eight, then four then the two they interviewed in-person Sunday in St. Louis. Memphis’ AD Laird Veatch, a former MU administrator, was the other finalist, sources have said. After meeting with Reed-Francois, Choi was sold.

“She has the vision, the experience and the tough-mindedness that we need,” he said. “She’s gonna be making some deep but necessary changes.”

Coincidentally, Reed-Francois and her family, husband Josh and son Jackson, were just in Columbia in June visiting the campus. Jackson plans to enroll in the Missouri School of Journalism in 2022 and join Cuonzo Martin’s basketball team as a walk-on.

She has a head start with both coaches.

Drinkwitz hosted the family on a tour of the new football facility, not knowing she’d be his boss two months later. On Wednesday, she noted the football coach’s “infectious energy.”

In 2011, Reed-Francois headed the search committee at Tennessee when the Volunteers hired Martin as head coach.

Now, her success at Mizzou will be measured in part by their teams’ success. First, though, Reed-Francois said she plans to get to know MU’s administration, her coaches and athletes, then dig into the department with a thorough SWOT analysis, looking closely at MU’s strengths, weaknesses, opportunities and threats.

“Because we’re not just competing with St. Louis and Kansas City. We’re competing for people’s time,” she said. “We’ve got to make sure that we’re creating an event where people fear missing out. I want to make sure you never want to miss a Mizzou game. We’re going to ask people about their experience. And then we’re going to fix any challenges that we may have.”

Teams are on the upswing after bottoming out several years ago.

Burden could give Mizzou instant jolt in 2022

After starring at Cardinal Ritter and East St. Louis, the five-star receiver could become an instant factor in Tigers' offense next season.

It's a light week in the SEC with five teams on a bye, but LSU-Ole Miss features a homecoming for the Tigers' embattled coach.

The Tigers, the SEC's most penalized team in conference play, resumes action next week at Vanderbilt

Desiree Reed-Francois gives a high five to Truman on Wednesday, Aug. 11, 2021, as she is introduced as the University of Missouri's 21st Athletic Director at Memorial Stadium in Columbia, Mo. Reed-Francois is the first woman to hold the position. Photo by Christian Gooden, cgooden@post-dispatch.com

Desiree Reed-Francois, speaks to media on Wednesday, Aug. 11, 2021, outside the chancellor's suite at Memorial Stadium after she was introduced as the University of Missouri's 21st Athletic Director in Columbia, Mo. Reed-Francois is the first woman to hold the position. Photo by Christian Gooden, cgooden@post-dispatch.com