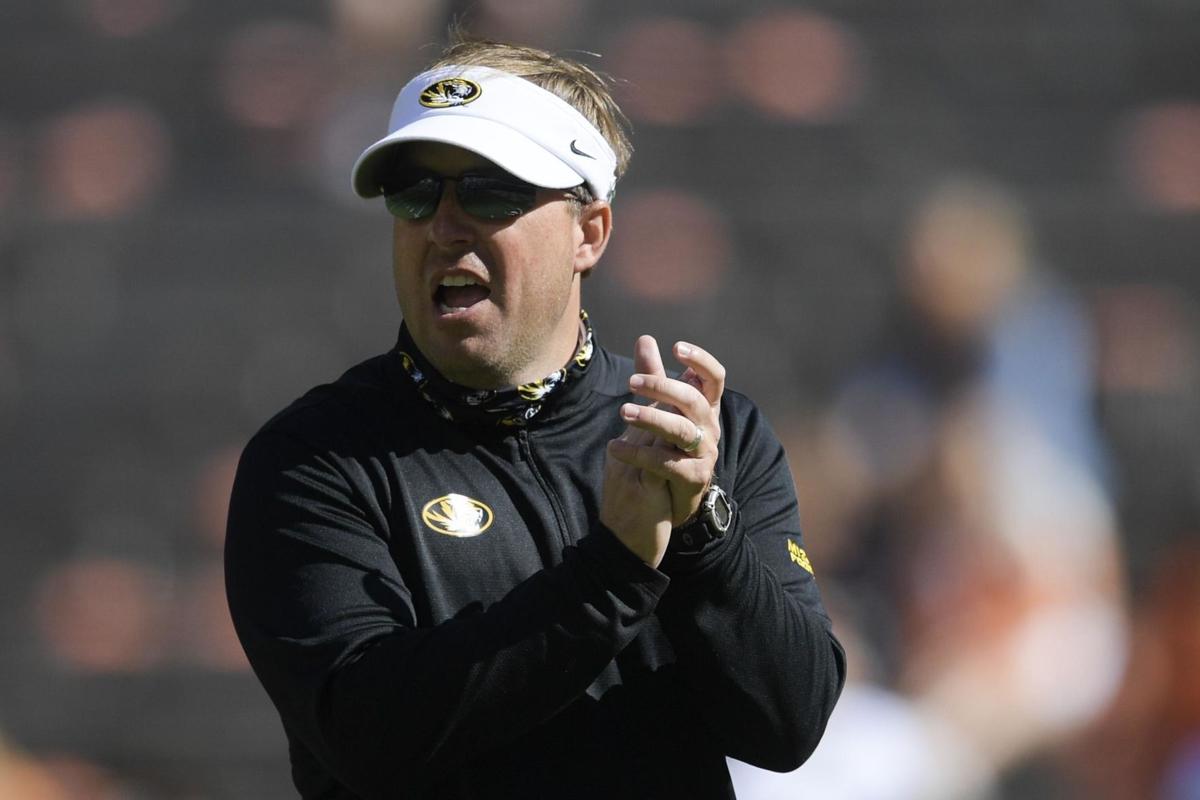 Missouri coach Eli Drinkwitz said, "We made the best decision in coordination with the SEC and Georgia to postpone."

COLUMBIA, Mo. — It will be another idle Saturday on Faurot Field.

Mizzou-Georgia became the SEC’s fourth COVID casualty that was postponed for the coming weekend, joining Auburn-Mississippi State, LSU-Alabama and Texas A&M-Tennessee. Earlier this season, Mizzou games against Vanderbilt and Florida were rescheduled because of both opponents’ COVID-depleted rosters.

As of Tuesday, the Tigers had one positive case within its program and other high-risk close contacts required to quarantine. One more positive test came up from Tuesday’s round of testing, MU coach Eli Drinkwitz said Wednesday, though another source confirmed that player was already ruled out of Saturday’s game for an unrelated reason.

“Disappointed, obviously, for our players, our coaches, our fans, our organization,” Drinkwitz said. “You work so hard to have opportunities to participate but, as we’re all dealing with nationally and worldwide. This pandemic has presented problems and the most important thing when we all started this was our players’ safety and the integrity and safety of the game. In that spirit, we made the best decision in coordination with the SEC and Georgia to postpone. We know that we’ll move forward and work to improve and wait for our next opportunity.”

Three of the four Mizzou players ruled out by contact tracing are on target to be available for next week’s game at South Carolina, a source said. The Tigers and Gamecocks kick off at 6:30 p.m. CT on Nov. 21 in Columbia, South Carolina.

“The plan is to do everything possible in order to play at South Carolina,” Drinkwitz said. “That will be our goal and intention. … I believe that would be 10 days out from right now. I think with this pandemic it’s just too far unknown. But we’ll do everything in our power to play and should have guys back in time to play.”

The SEC roster threshold policy states that teams must have a minimum of 53 scholarship players to play a game, including seven offensive linemen, four defensive linemen and one quarterback. The Tigers would have hit the 53 scholarship player benchmark Saturday, but it was a position group shortage that forced the postponement, the source confirmed.

“It’s not a massive outbreak,” Sterk said on Finebaum’s show. “It’s more of a matter of attrition. We’ve been low in our numbers from the start. A few folks opted out early then we had some season-ending injuries and then just this past week we’ve had a couple (positive cases). But then with contact tracing it really puts us below our numbers on the defensive line.”

“Coach Drinkwitz wanted to play this week,” he added, “but we just felt for the safety of our players that we couldn’t go forward with it and obviously the SEC made that decision.”

“We were going to do our dead-level best,” Drinkwitz said. “We tried (Tuesday), we went out there and practiced and tried to see if it was possible to make it work and it just wasn’t going to happen.”

Injuries and COVID issues have drained the team’s depth along the offensive line all season, but MU’s defensive line has lost multiple players to injuries, too, including nose tackle Kobie Whiteside and defensive tackle Darius Robinson.

Three players are suspended for the first half of Mizzou’s next game for their role in the halftime fight at Florida on Oct. 31, but Drinkwitz said those suspensions didn’t factor into the position group shortages that postponed Saturday’s game.

Unlike some other teams around the SEC that have to shut down all team activities — Texas A&M, Auburn, Mississippi State — Mizzou plans to move forward with practice and normal team activities through the rest of the week. The Tigers had a bye last week and haven’t played since losing at Florida.

What happens to the Mizzou-Georgia game? The teams don’t share a common open date, so, in the SEC’s terms, the opportunity to reschedule the game will have to be evaluated.

The SEC set aside Dec. 12 as a universal bye week for all teams, but MU has tentatively moved its home game against Vanderbilt to that date. SEC teams could meet on Dec. 19, the day of the SEC championship game in Atlanta, if they’re not playing for the league championship. As of this week, Florida is in first place in the SEC East Division, essentially two games ahead of UGA with the head-to-head tiebreaker and three games ahead of Mizzou, also with the head-to-head edge.

“The SEC is evaluating when the game will be rescheduled,” Georgia coach Kirby Smart said Wednesday. “That’s kind of out of our hands.”

“That has nothing to do with me and that would be up to the league office,” Drinkwitz said.

Should the Georgia game be rescheduled, tickets purchased for the game will be honored on the rescheduled date.

Arkansas, 6-0 against the spread this fall, host No. 6 Florida with a familiar face on the sideline as interim head coach.

Missouri coach Eli Drinkwitz said, "We made the best decision in coordination with the SEC and Georgia to postpone."