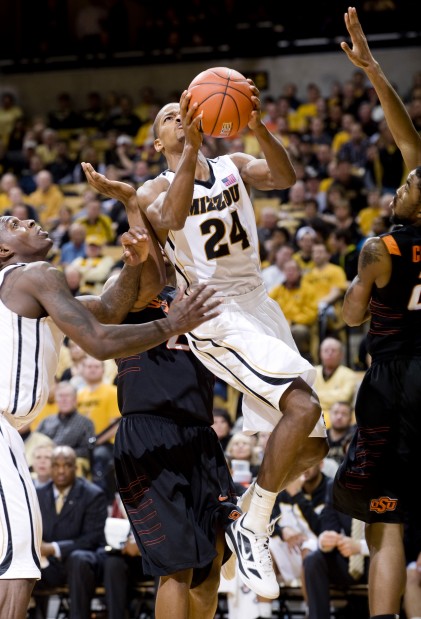 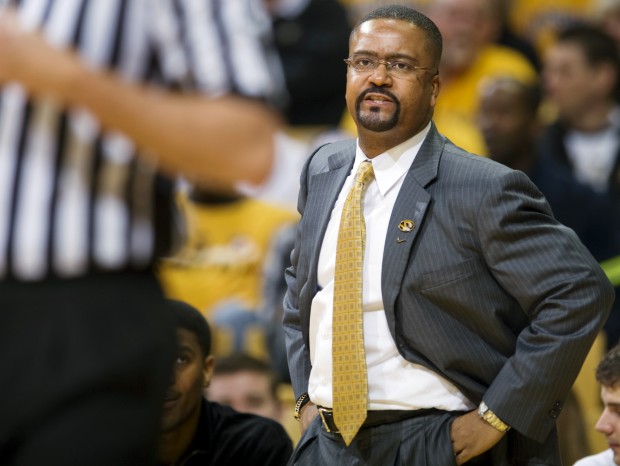 Missouri head coach Frank Haith discusses a call with an official during the first half of an NCAA college basketball game against Oklahoma State on Wednesday, Feb. 15, 2012, in Columbia, Mo. Missouri won the game 83-65. (AP Photo/L.G. Patterson)

Missouri's loss to Kansas State came six weeks ago, and the Tigers have accomplished a considerable amount of good in the meantime. Enough to firmly establish themselves as a frontrunner for an NCAA Tournament No. 1 seed.

But it hasn't been long enough for coach Frank Haith to forget or play down the moment. Not with the Wildcats visiting Mizzou Arena tonight.

The game tonight marks the beginning of a huge week for the Tigers (25-2 overall, 12-2 in the Big 12). Ranked No. 3 in the country, they have remained consistent enough that those who make a living projecting the tournament field have bestowed a No. 1 seed for a couple of weeks.

Now, it's the Tigers' task to protect that territory.

And while No. 4 Kansas remains a serious challenger for a top seed, the Tigers can't allow themselves to look ahead to Saturday's rematch in Lawrence. Not after Kansas State held Mizzou to 33 percent shooting and outrebounded the Tigers 39-25 in the first meeting, which ended 75-59.

"I don't think this team has (looked ahead) all this year," Haith said. "I'm proud of how they have stayed focused. We understand, no doubt, Kansas State can whip us like they did in Manhattan if we're not ready to play. They're the type of team that can take us out and be very physical with us."

Mizzou has a short turnaround after playing Saturday at Texas A&M. That leaves little time for guard Matt Pressey to recover from an ankle injury suffered at A&M.

Already depth challenged, the Tigers can ill-afford to lose another player. Haith said when a player goes down, it's "very scary" because of the presence of seven scholarship players.

That lack of depth is an issue that has forced Haith to make adjustments, whether it be the length of practices or strategy. For instance, he has emphasized to guard Phil Pressey that he be more solid defensively and keep his man in front of him.

"We needed him to be more solid because we were getting broken down by dribble penetration, and we can't afford that because of our lack of depth," he said. "If we had a shot blocker or some depth on our back line, maybe. Because of that limitation, we had him back off."

Practices have been adjusted so that "we don't meat grind them," Haith said. The maximum length of practices at this point is usually an hour 45 minutes.

"That's our adjustment based on personnel and how we have to keep our guys ready to play, and it's done pretty good so far," Haith said.

A-10 title would end long drought for SLU

The last time SLU finished first in whatever league it was in was in 1970-71, when it came in atop the Missouri Valley Conference.

Illini play for pride, little else

The image Meyers Leonard crying on the bench at the end of a loss at Nebraska has made the rounds and become something of a symbol of the team's slide.

The NCAA's Midwest Regional will be in St. Louis on March 23 and 25. Each week, Stu Durando highlights four teams that could make the trip.

ST. CHARLES - Lindenwood and McKendree found themselves in transition this season, about to enter the unfamiliar territory of NCAA Division II…

Missouri head coach Frank Haith discusses a call with an official during the first half of an NCAA college basketball game against Oklahoma State on Wednesday, Feb. 15, 2012, in Columbia, Mo. Missouri won the game 83-65. (AP Photo/L.G. Patterson)