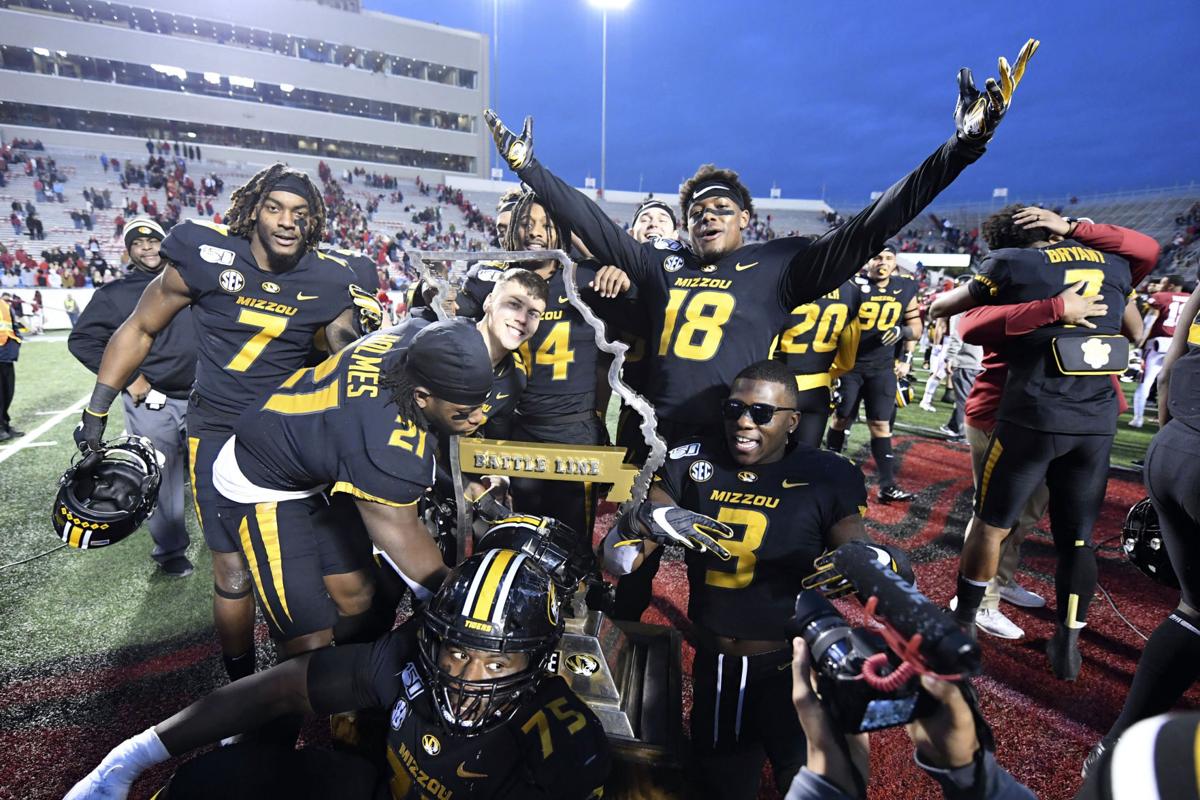 Missouri players hope to be celebrating with the Battle Line trophy after Friday's game against Arkansas, as they did in here in 2019. 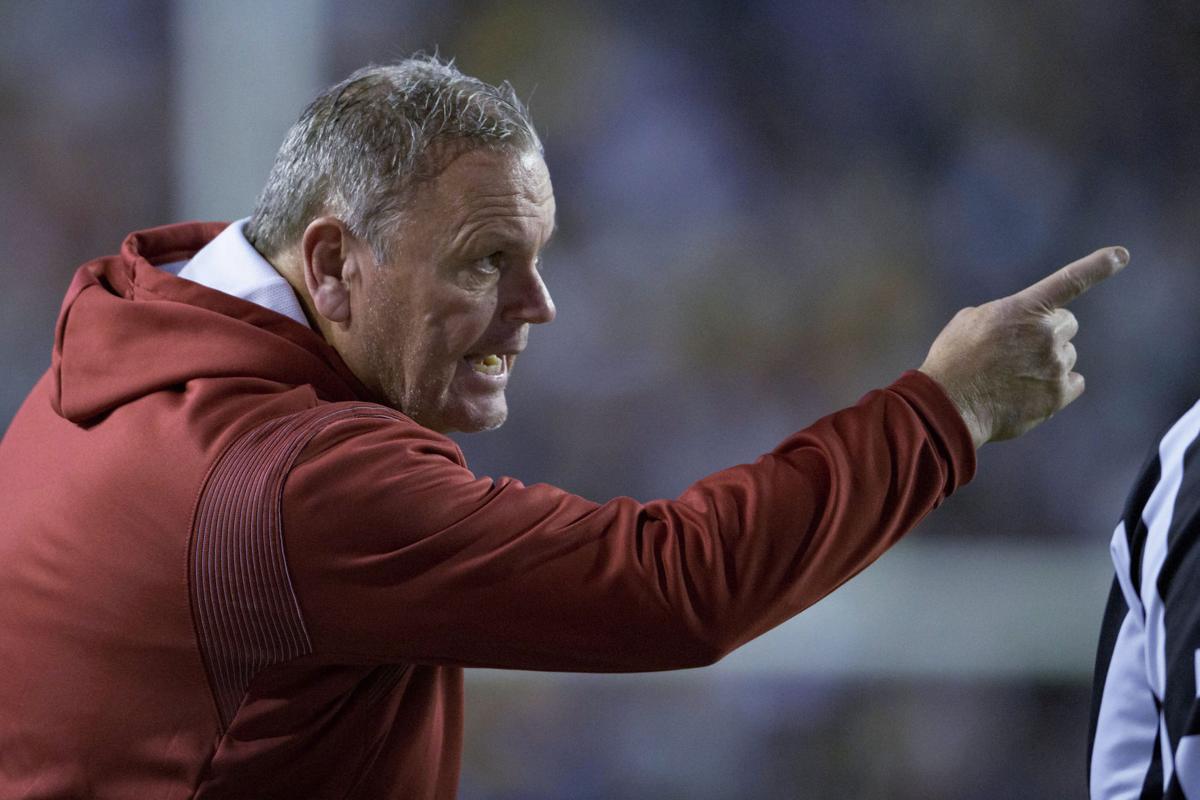 Coach Sam Pittman has Arkansas at 7-4, having clinched a winning record for the first time since 2016.

COLUMBIA, Mo. — It’s time for the Missouri-Arkansas Battle Line Rivalry, which means it’s that time of year to question whether the Tigers-Razorbacks showdown is indeed a true college football rivalry. (If you have to ask every year, probably not — at least not yet.)

But this year’s edition, which kicks off 2:30 p.m., Friday in Fayetteville, feels more like a family reunion. There are familiar faces up and down the sideline and storylines that intersect all the way from here to the northwest corner of Arkansas.

In a battle of two second-year coaches in Missouri’s Eli Drinkwitz (an Arkansas native) and Arkansas’ Sam Pittman (a former Missouri assistant), the rivalry, errr, matchup features two programs both headed to the postseason, both in position for winning seasons, both playing relevant games in November. That’s rarely been true since Arkansas became Mizzou’s permanent cross-division SEC opponent in 2014.

At 7-4, Pittman’s Hogs have clinched a winning record for the first time since 2016. If they didn’t play in football’s most grueling division — they’ve lost to Alabama, Ole Miss and Auburn by a combined 18 points — they might have double-digit wins and playing for a New Year’s Six bowl. Arkansas has lost five straight to Missouri but comes into Friday’s game favored by 14½ points.

At 6-5, Drinkwitz’s Tigers need one more victory to secure a winning record. A win Friday would be MU’s second straight as an underdog — the Tigers nipped 9-point favorite Florida 24-23 in overtime last week — and could knock off a ranked team for the second time in eight tries under Drinkwitz.

With a trophy on the line, to boot.

No, not the Golden Boot the Razorbacks took home after beating Louisiana State two weeks ago, but the gargantuan Battle Line Rivalry trophy that features a silver outline of the state of Missouri over a silver outline of the state of Arkansas. It stands 4 feet, 4 inches tall and weighs 180 pounds and since 2016 has lived in the Missouri locker room. The Tigers have owned the series so long the trophy has resided in two different locker rooms, moving across Providence Road to south end zone complex in 2019.

Here’s how familiar these two rosters have become: Two players and three coaches in Pittman’s program have celebrated with the trophy — as Tigers.

Arkansas defensive coordinator Barry Odom was 4-0 against the Razorbacks as Missouri’s head coach from 2016-19. Cornerbacks coach Sam Carter worked under Odom all four years at Mizzou as an analyst. Linebackers coach Michael Scherer was 3-0 against Arkansas as an MU linebacker and coached under Odom as a grad assistant in 2019.

Arkansas defensive linemen Markell Utsey and Tre Williams never lost to the Hogs when they played for Mizzou, including last year’s 50-48 victory in Columbia. Utsey transferred to Arkansas last spring, while Williams left Mizzou for Houston then reunited with Utsey earlier this year.

“So excited for (Williams) to have the right fit and find and accomplish what he’s accomplished there,” Drinkwitz said. “Markell Utsey is a graduate from the University of Missouri, who is from Little Rock and playing for his home state and having a successful season for them.”

Missouri safety Martez Manuel, a Columbia native like Williams, said he’s senses the MU-Arkansas series means more with so much familiarity between the rosters. It helps that both teams enter the game with a winning record for the first time since 2014.

“I feel like I came in at the perfect time because I felt like before it wasn’t much of a rivalry,” Manuel said. “But now that Coach Odom is there and Tre’s there and Utsey’s there, you can feel more of the tension, more of the rivalry. I think that’s a lot of fun.”

Missouri defensive line coach Al Davis played D-tackle at Arkansas from 2009-12 and later coached there. He’s been vital to Mizzou’s midseason defensive turnaround since Drinkwitz promoted him from an analyst position in October. If the D-line finishes the season strong he could secure the job for next year, too — if he hasn’t already.

“He didn’t try to be anybody but himself,” Drinkwitz said. “He took the same mentality that he had when he was a Razorback. The way he made himself into a great player and captain is what he did with our D-line. He holds those guys accountable. He teaches them exactly what they need to do. … I can’t imagine it could have gone any better.”

Drinkwitz hopes he’s saying the same thing Friday evening, when an untold number of family and friends will be on his side. Drinkwitz was born in Oklahoma but grew up in Alma, Arkansas, just 45 minutes south of Fayetteville down I-49. He had a regular seat at Razorback Stadium in the southeast corner of the end zone.

“There’ll be a lot of people there that I consider friends or considered friends prior to kickoff,” he said. “I don’t know after kickoff if they’ll still be my friends.

“But when we play,” he added, “it’s going to be our team versus their team trying to win that trophy. I don’t think there’s any ill will in this game at all. I think it’s a good old-fashioned rivalry.”

Eye on the Tigers Podcast: Rivalry or not, welcome to Mizzou-Arkansas Week

Arkansas defensive coordinator celebrates his birthday with a victory and the game ball.

Missouri players hope to be celebrating with the Battle Line trophy after Friday's game against Arkansas, as they did in here in 2019.

Coach Sam Pittman has Arkansas at 7-4, having clinched a winning record for the first time since 2016.