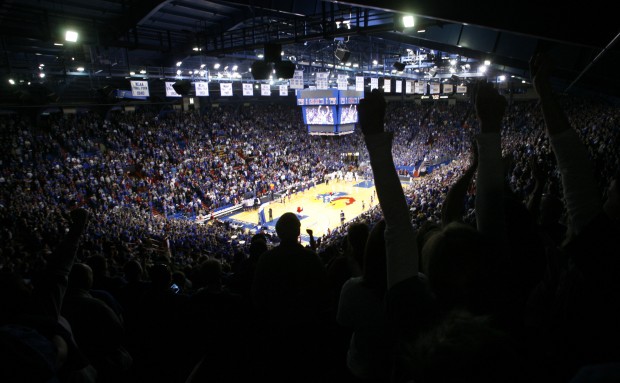 LAWRENCE, Kan. • As it happens, the single loudest noise Kansas coach Bill Self ever heard wasn't at Allen Fieldhouse, a thunder bin of college basketball.

It was at Gallagher-Iba Arena during a wrestling match in 1982, his freshman year at Oklahoma State.

"Unbelievable," said Self, who believes Allen has a more sustained roar but added, "I don't think I've ever heard Allen as loud as Gallagher-Iba was at that one moment."

At least he hasn't until Saturday.

A "perfect storm" of circumstances has Kansas basketball operations director Barry Hinson wondering how ear-splitting it might get when third-ranked Mizzou visits No. 4 KU in the 267th and last scheduled game between the ancient rivals.

The loudest precedent, said KU video director Mike Lickert, was 118-something decibels against Texas in 2009 and nearabouts often.

To breaking them, he meant — an observation that compelled Hinson to forage online for a decibel comparison chart to put it in context.

Below the list, on hearingaidknow.com, he found what he was looking for.

"Noise levels of 130 or over will be painful and likely to cause immediate hearing damage."

Mizzou Arena was plenty loud for Kansas on Feb. 4, leaving Self and Hinson among others dazzled.

But it's a din of inequity at KU, perhaps unequaled anywhere — and almost certainly the most precious experience to be lost for Mizzou with its move to the Southeastern Conference.

Typically, the boom is at its apex just before tipoff, and it's impossible to ignore. Scan the crowd, and you'll see some wearing ear plugs, others covering their ears.

When Ohio State played at KU earlier this season, Hinson saw a Buckeye just mouth the word "wow" in awe just before the ball went up.

Only adding to the mystique, as Hinson put it, Baylor coach Scott Drew once took his team off the court during the video buildup moments before the game started.

"That means we must have done a good job," said Lickert, who acknowledges the cranked-up sound system contributes mightily to the sound level but insists the stoked audience of 16,300 really moves the meter.

Lickert perhaps has some diabolical additions planned for the MU game, but he wasn't letting on.

And, of course, it isn't really the gonging bells and shrill whistles that make Allen what it is — though the haunting Rock Chalk Chant at game's end is another matter.

At the heart of it all is the arena and program's intimate ties to the creation and rise of the game itself.

"You truly feel like you can feel the ghosts of days gone by," said Kansas athletics director Sheahon Zenger, who lived blocks away when he attended his first game there as a 3-year-old and likes to wander Allen when it's quiet in the evening. "Who else starts their intro video with James Naismith and Doc Allen?"

That would be the inventor of the game and the "father of basketball coaching," despite Naismith evidently discouraging protégé Allen from trying to make a career of it.

Speak for yourself, Allen might have been forgiven for responding.

Each is buried in separate cemeteries in Lawrence, and the threads of their connection to the program remain taught.

Former KU coach Roy Williams occasionally ran by their graves and touched them for luck, and Kansas fans might still, say, name a dog "Phog." People who knew Allen, Naismith or their relatives still live in Lawrence, Zenger said.

All of which is inseparable from the aura of Allen Fieldhouse, which opened in 1955 with a construction cost of $2.5 million.

"You can't go to Kmart, Walmart or Target, walk in and say, `Where's the aisle where you sell tradition?' " Hinson said. "You can't purchase it. And I know it sounds like a Mastercard 'priceless' commercial ...

"But 100 feet from this office is Wrigley. It's Fenway. Old Yankee Stadium. It's the Colosseum. I mean, it is. And it's set down in a small town in midwest America. On Naismith Drive."

That history inspires senses of reverence and responsibility in those entrusted as stewards now.

Self appreciates and respects the traditions at Mizzou, and K-State and OSU, among others, but he still seems to find himself in disbelief that he is only the eighth coach in Kansas history.

"That's unbelievable! Some places have had eight coaches in the last 20 years. Pittsburgh football's had like four in the last 16 months," he said.

And yet with that comes a humbling understanding.

"The one thing that I certainly know … is I'll never be the best coach who's coached here. Never," said Self, who has won a national title and is 260-51 in nine seasons at Kansas. "And I'm not sure Larry (Brown) will be, either. Or Roy. Phog Allen coached here, the father of basketball coaching.

"And then you look at, I'm not sure that any recruit we'll have will ever be the best player to play here. Wilt (Chamberlain) played here.

"So, if you look at it like that, it's kind of like one of those situations where you're a part of something so much bigger than yourself, and all we are is caretakers during the time we're here. That's all we are."

Just as the success and tradition are entwined, the bricks and mortar and sheer simplicity and acoustics and aesthetics of Allen are essential to the experience of a game here.

"One of the most popular things in our society right now is retro," Hinson said. "Well, we live retro every day. We are retro."

When KU renovated the Fieldhouse, it did so with a prime directive: the integrity of the internal environment was to remain unmussed.

And other than new video boards and sound systems and fresh paint, the add-ons — including an enhanced Hall of Fame and luxury seating area — are outside the court area, where wooden seats still prevail.

So, the building has gone from "tired," as Self described its state when he arrived in 2003, to "probably as alive now as it's ever been."

And maybe as alive as any building could be.

"You can still almost feel and see the walls sweat," Self said.

They don't and, in fact, can't make 'em like Allen any more, as Hinson learned to some degree as head coach at Missouri State when the school set out to build JQH Arena.

"Our specs (at Allen), our fire codes, all that stuff, are from the old days. I mean, you can't build a building like Allen any more."

Not that Kansas needs to any time soon. Or maybe ever.

For all that's happened there, though, Saturday may create a moment — and a noise — like no other.

"I don't think in my lifetime I'll ever be in such an intense environment," said Hinson, adding, "It will be almost like a portrait."

Of a place in time never likely to be repeated for Mizzou — and in a certain way, even for KU.

Mizzou is prepared for Phog

Players have heard the loud crowd before, prepared with blaring crowd noise.

Tigers fight for No. 1 seed

And No. 1s fare much better than No. 2s when it comes to the NCAA Tournament.

KU's Self ready to move on without Mizzou