Oct. 24, 2010: Missouri fans storm onto Faurot Field at the conclusion of the Tigers' 36-27 victory over Oklahoma. Attendance for the OU game was a season-high 71,004. (Dilip Vishwanat/Getty Images) 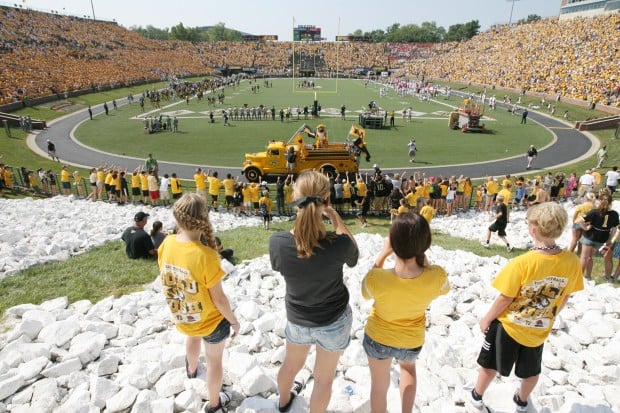 The Missouri Board of Curators will consider a $72 million facilities upgrade, including a 6,000-seat expansion at Faurot Field, when it meets Tuesday in Columbia.

The stadium upgrade would include 5,200 additional seats on the east side as well as 800 to 900 premium seats at a cost of $46 million, according to university documents.

Faurot Field has a capacity of 71,004 as the Tigers begin play in the Southeastern Conference in September. Mizzou will have the 10th-largest stadium in the conference in 2012 ahead of Kentucky, Mississippi, Mississippi State and Vanderbilt. The additional seating would push Mizzou past only Arkansas.

The facilities plan includes six smaller projects, including an expansion of the stadium's north concourse, stadium structural improvements and improvements for the tennis, baseball, softball and golf facilities.

The expansion plan comes as Mizzou prepares to become an official member of the SEC on Sunday. Missouri officials declined comment, however, athletics director Mike Alden discussed the timing at the SEC spring meetings last month.

He said it was a coincidence that the curators would discuss the issue days before the official welcome from the SEC.

"When you're preparing for our board, there's so much lead time necessary for that," he said. "The timing is good but it wasn't planned that way. It's just the way it worked out. We're looking forward to it because it gives us a real opportunity to portray the vision, how it's going to get started and how you pay for it all."

The timeline calls for designs for the seating addition to be ready in July 2013 and construction to be finished in July 2015.

The stadium work also includes plans for a $9.75 million press box renovation. Some media seating will be moved to the upper deck and vacated media areas will be turned into suite seating.

The field at Faurot already has undergone some changes with "Mizzou" replacing "Missouri" in the end zones, a larger Tiger head logo and SEC logos. Also, the parking lots surrounding the stadium have been resurfaced.

Mizzou officials are expected to discuss the master plan Tuesday. Additionally, the school has called a press conference for Tuesday to announce a "major private gift."

On Tuesday, the University of Missouri agreed to spend more than $100 million to finance upgrades to its football stadium and other facilities.

Mizzou Talk: Sound off about the SEC

Burwell: College football is always in season in the SEC

I wonder if St. Louis has room to embrace another full-time obsession: Mizzou football.

Mizzou has to ramp up its resources and facilities to be able to compete in a football conference whose members have claimed the last six national titles.

Oct. 24, 2010: Missouri fans storm onto Faurot Field at the conclusion of the Tigers' 36-27 victory over Oklahoma. Attendance for the OU game was a season-high 71,004. (Dilip Vishwanat/Getty Images)