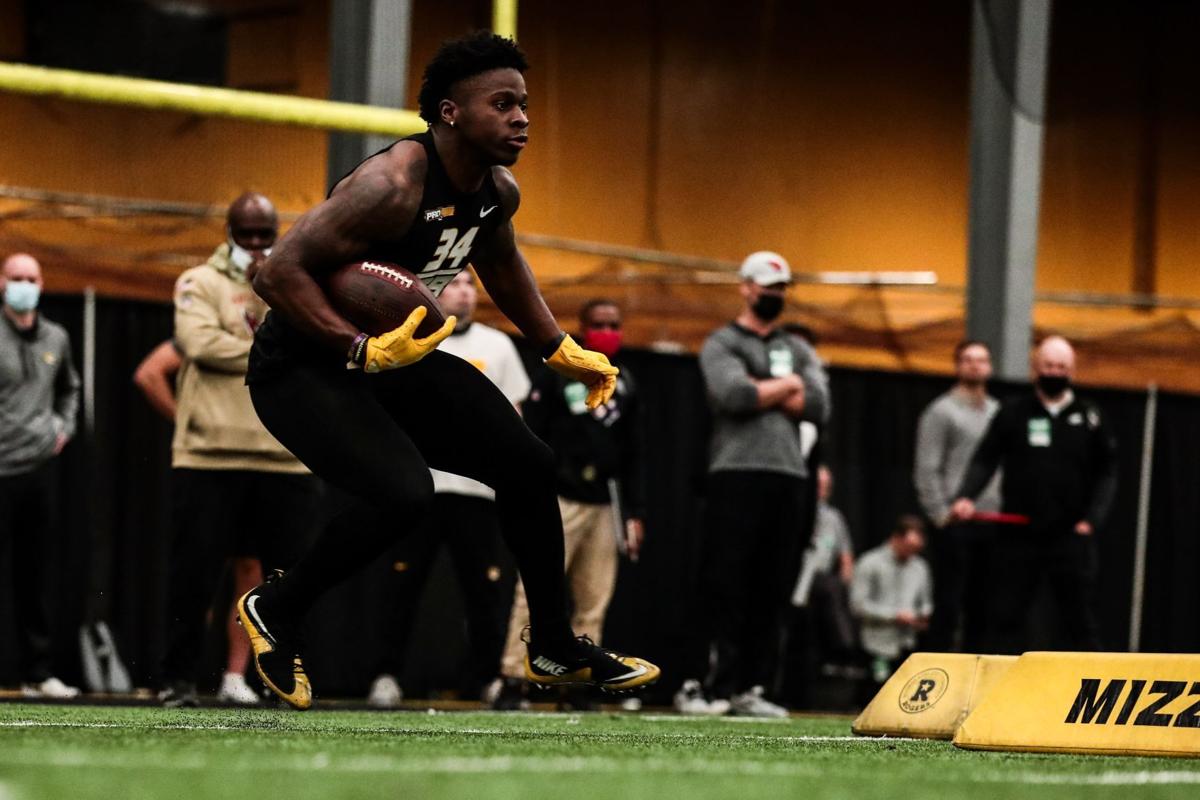 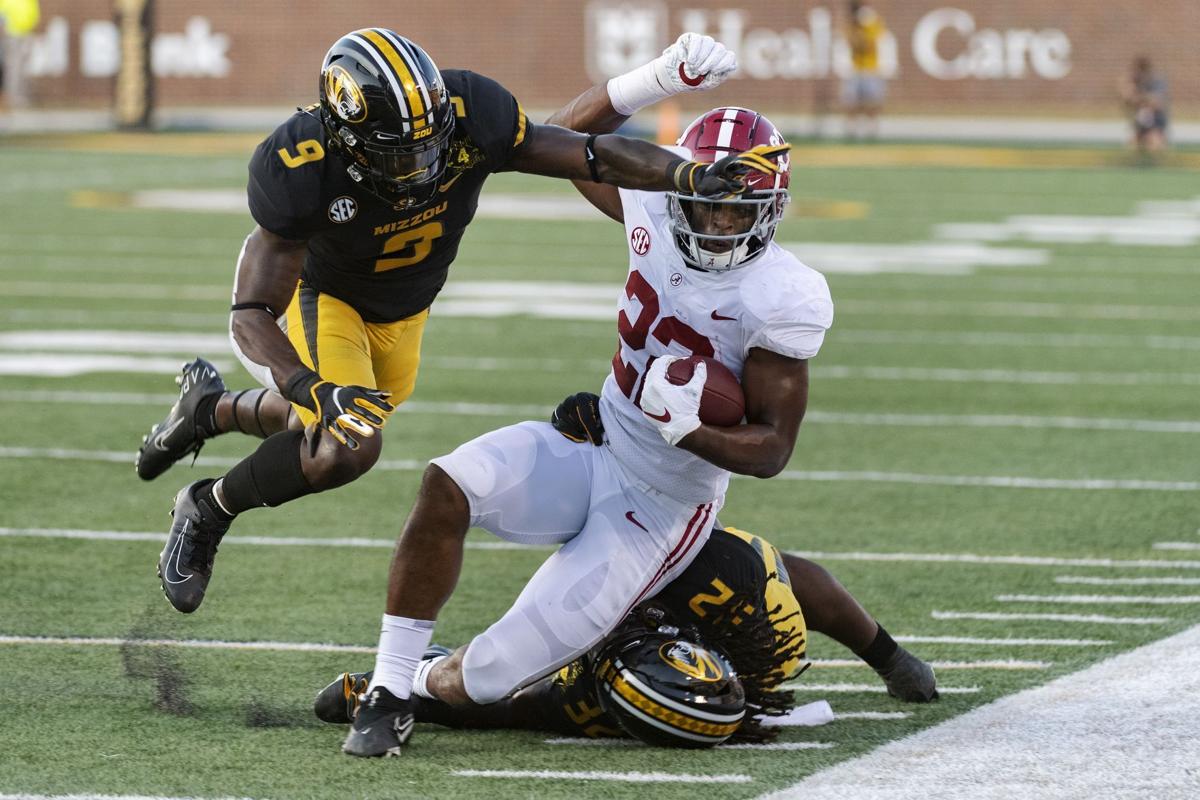 Alabama's Najee Harris, center, is knocked out of bounds by Missouri's Tyree Gillespie, left, and Nick Bolton, right, during the first quarter of a game on Saturday, Sept. 26, 2020, in Columbia, Mo. (AP Photo/L.G. Patterson) 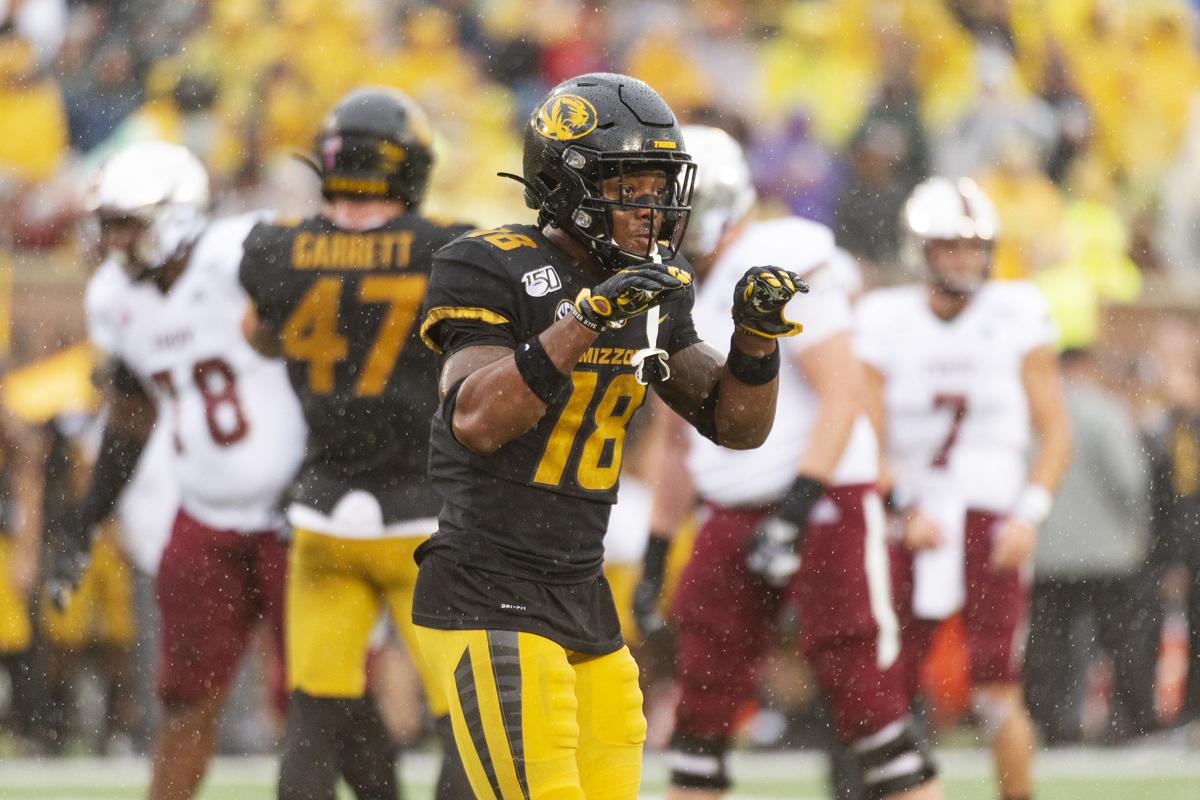 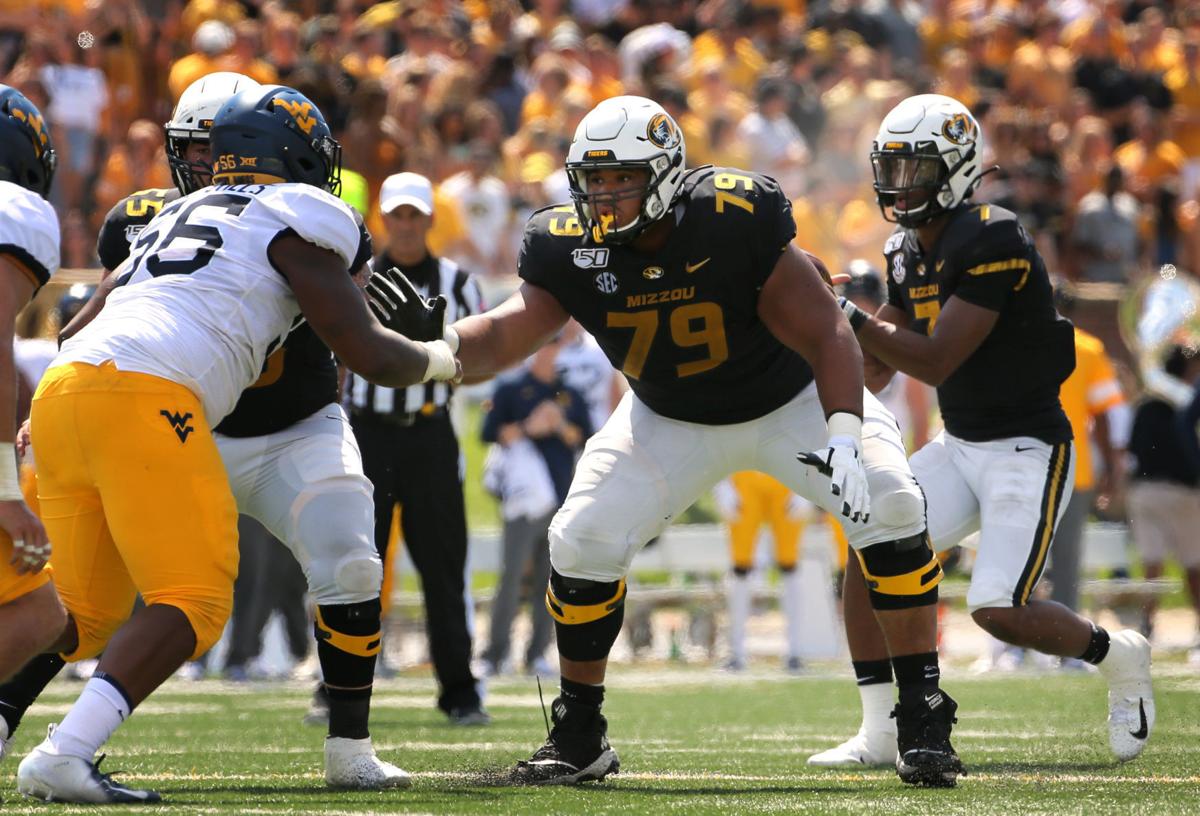 Mizzou's offense is sorely missing standout right tackle Larry Borom (79), who is out "a couple more weeks" with a lower-leg injury. Here, Borom blocks against West Virginia in a Sept. 2019 game at Faurot Field. (Post-Dispatch photo by David Carson)

Saturday was never in the plans for Larry Rountree III. Once a three-star football prospect from North Carolina, Rountree came to Missouri with a simple set of goals, none of which included the NFL draft.

“My mom and dad, they were just trying to get me into college. The NFL was not a dream,” he said Saturday. “It was, ‘OK, get in college, get your degree, do what you’re supposed to do, take care of your business and don’t embarrass our name.’ That was the goal. So, this is just a blessing.”

A day after the Kansas City Chiefs selected Mizzou linebacker Nick Bolton in the second round, MU safeties Tyree Gillespie and Joshuah Bledsoe also came off the board, along with offensive lineman Larry Borom.

The Las Vegas Raiders selected Gillespie in the fourth round (No. 143), while the New England Patriots took Bledsoe in the sixth (No. 188). They’re the first Mizzou safeties drafted in more than a decade. The last one was William Moore, a second-round pick to Atlanta in 2009.

In the fifth round, the Chicago Bears selected Borom (No. 151). One round later, the Chargers drafted Rountree (No. 198), who finished his college career with 3,720 rushing yards, more than any running back in Mizzou history. In Los Angeles, he’ll get to play with former Tigers quarterback Chase Daniel, MU’s career passing yards leader.

Mizzou’s five-man draft class matches its biggest class since 2009, when six players were drafted. The Tigers also had five players drafted in 2015.

“He runs with conviction,” Kiper said during the draft broadcast. “He looks to dish out as much punishment as he takes. He has a burst through the hole and an effective spin move. Now, there’s work to be done in the passing game. He needs to improve as a pass-receiving option and needs to improve as a blocker as well. But as a pure runner Larry Rountree III can get it done.”

Rountree, talking to reporters on his post-draft Zoom call, said he welcomes the chance to be more involved in the passing game after catching 47 passes in four seasons.

“That’s something I wasn’t really used (for) in college, but I always worked on catching out of the backfield and pass protection,” Rountree said. “So I don’t think it will be much of a big adjustment, but I know it’s something that I have to work on consistently.”

Gillespie and Bledsoe form the first tandem of Mizzou defensive backs chosen in the same draft since 1983, when Demetrious Johnson (fifth round, Detroit) and Kevin Potter (ninth round, Houston) were both drafted. Gillespie was the second safety the Raiders moved up in the draft to select, following second-rounder Travon Moehrig from TCU.

Bledsoe became the Patriots’ first draft pick from Mizzou in more than two decades. The last one was defensive lineman Jeff Marriott in 2000, who was taken in the fifth round, 38 spots before the Pats drafted a quarterback from Michigan, Tom Brady.

Borom became Mizzou’s first player drafted by the Bears since wide receiver Justin Gage in 2003. Borom said he had multiple meetings with the Bears before and after Mizzou’s pro scouting day in March and instantly clicked with offensive line coach Juan Castillo.

“As a player, I’m a mean, physical, dominant big person that’s going to displace people off the line of scrimmage,” Borom said on his post-draft Zoom call with reporters. “I play with that demeanor and that chip on my shoulder that I’ve had since I was younger. I’m never going to lose that.”

On the local front, Nashville, Illinois, native Royce Newman, an offensive lineman from Ole Miss, was taken by the Green Bay Packers in the fourth round at No. 142 overall. Newman, who initially committed to Mizzou in high school, was a two-year starter for the Rebels.

Tigers also push back a visit to Colorado to 2031.

Two-time All-SEC linebacker stays in the state, heads to the two-time AFC champions.

Alabama's Najee Harris, center, is knocked out of bounds by Missouri's Tyree Gillespie, left, and Nick Bolton, right, during the first quarter of a game on Saturday, Sept. 26, 2020, in Columbia, Mo. (AP Photo/L.G. Patterson)

Mizzou's offense is sorely missing standout right tackle Larry Borom (79), who is out "a couple more weeks" with a lower-leg injury. Here, Borom blocks against West Virginia in a Sept. 2019 game at Faurot Field. (Post-Dispatch photo by David Carson)