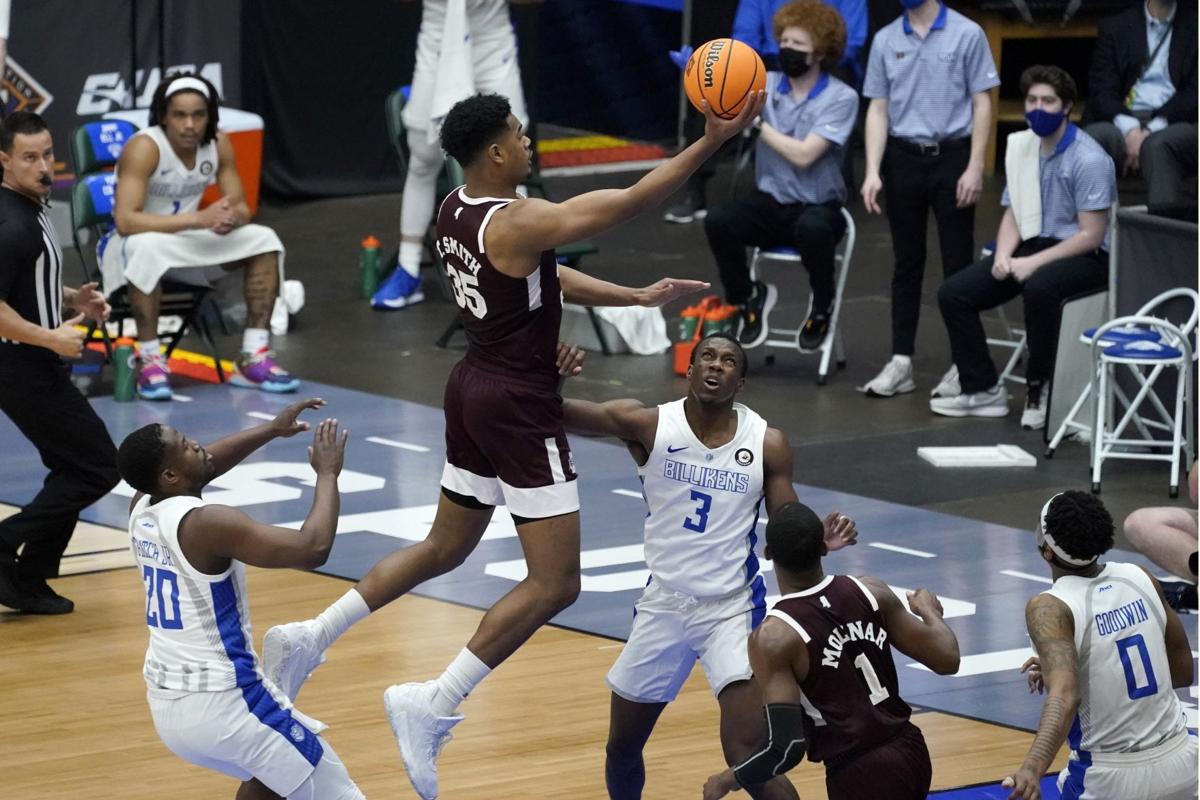 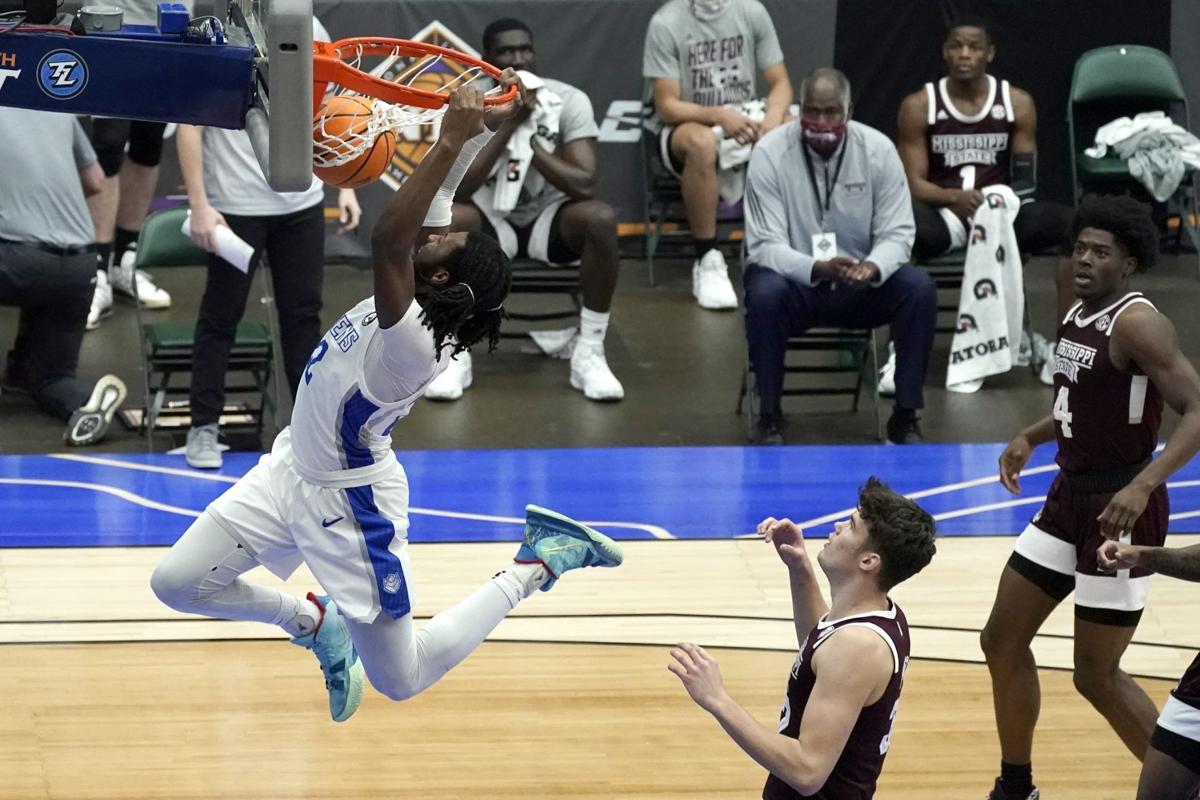 St. Louis University's  Terrence Hargrove Jr. (22) dunks the ball after getting past Mississippi State forward Quinten Post (32) as Cameron Matthews (4) looks on in the first half of an NIT game on Saturday, March 20, 2021, in Frisco, Texas. (AP Photo/Tony Gutierrez)

Another memorable Jordan Goodwin-Hasahn French moment was created Saturday when the senior guard came up with a steal, the two broke out of the pack and Goodwin tossed his roommate the ball for a reverse dunk that gave St. Louis University the lead.

The two seniors and their teammates were in need of a spark against Mississippi State in the first round of the National Invitation Tournament, and that seemed like a needed boost. But nothing SLU did created any sustained momentum in Frisco, Texas, and Mississippi State fended off SLU for a 74-68 win in what likely was the final college game for Goodwin and French.

“My heart is heavy,” Goodwin said. “Definitely hurting right now. I broke down after the game knowing it’s my last time playing in this uniform.”

Billikens coach Travis Ford said he spent time after the game talking to the team about lessons learned during a season unsettled by COVID-19 and thanking his two seniors.

“It hasn’t set in yet,” French said. “In the locker room it was really a weird feeling knowing I’ll never put on that jersey again.”

A season that was at one time full of promise for SLU (14-7) ended unceremoniously in the shadow of the NCAA Tournament. French had 17 points and 10 rebounds in his final game, and Goodwin had 14 points, six rebounds and six assists.

“I talked to the seniors about what they’ve meant,” Ford said. “No words are good enough that I can come up with about what they mean to me personally and to the program. I talked a lot about life lessons. I hope they remember this year, not for the wins and losses but what lessons we learned and how to handle adversity.”

The Billikens (14-7) had the ball wile trailing by three points twice with a chance to close the gap or tie it, but Goodwin missed on a 3-point attempt and Yuri Collins committed a turnover.

Javonte Perkins, a senior who has announced he will return for another season under a rule allowing an extra year off eligibility because of the coronavirus pandemic, led the Billikens with 21 points. But SLU couldn’t make up for Mississippi State shooting 50% and outrebounding the Billikens 35-32.

SLU experienced some of the same defensive lapses it had much of the season. In the final two months, the offense wasn’t always able to keep pace after starting the season averaging more than 80 points in nonconference play.

“I have done a lot of thinking about that the last couple of weeks, trying to figure things out,” Ford said. “It’s not hard to see we’re a different team. Our defense wasn’t great, but our offense was probably the biggest difference from that point to the second half of the season. We went from scoring at a high rate with high percentages to struggling to score.”

Mississippi State was able to keep SLU at arm’s length most of the second half at times with Billikens’ help. There was a missed dunk by Terrence Hargrove Jr. and a turnover when French flipped the ball from the front court to Perkins, who still was in the backcourt.

SLU entered the game with little experience playing away from home this season because of COVID-19 problems. The Billikens went 1-4 in true road games, with the victory coming at Fordham. They were 1-1 in neutral games at the Atlantic 10 Conference tournament.

That lack of wins away from home likely was part of the discussion when it came to SLU’s resumé for the NCAA Tournament.

SLU started Saturday by pounding the ball inside to French as was the approach in many games this season. The senior forward opened by scoring six points in the first five minutes before the Billikens got away from putting the ball in his hands the rest of the half.

Marten Linssen contributed to the inside attack early with a three-point play to give SLU a 14-13 lead. The Bulldogs followed with a 9-0 run that left the Billikens battling from behind.

When the Bulldogs came up with a loose ball under the SLU basket and turned it into a fastbreak basket and D.J. Stewart Jr. followed with a 3-pointer, Mississippi State had rebuilt its lead to eight points with little more than four minutes left.

St. Louis University's  Terrence Hargrove Jr. (22) dunks the ball after getting past Mississippi State forward Quinten Post (32) as Cameron Matthews (4) looks on in the first half of an NIT game on Saturday, March 20, 2021, in Frisco, Texas. (AP Photo/Tony Gutierrez)