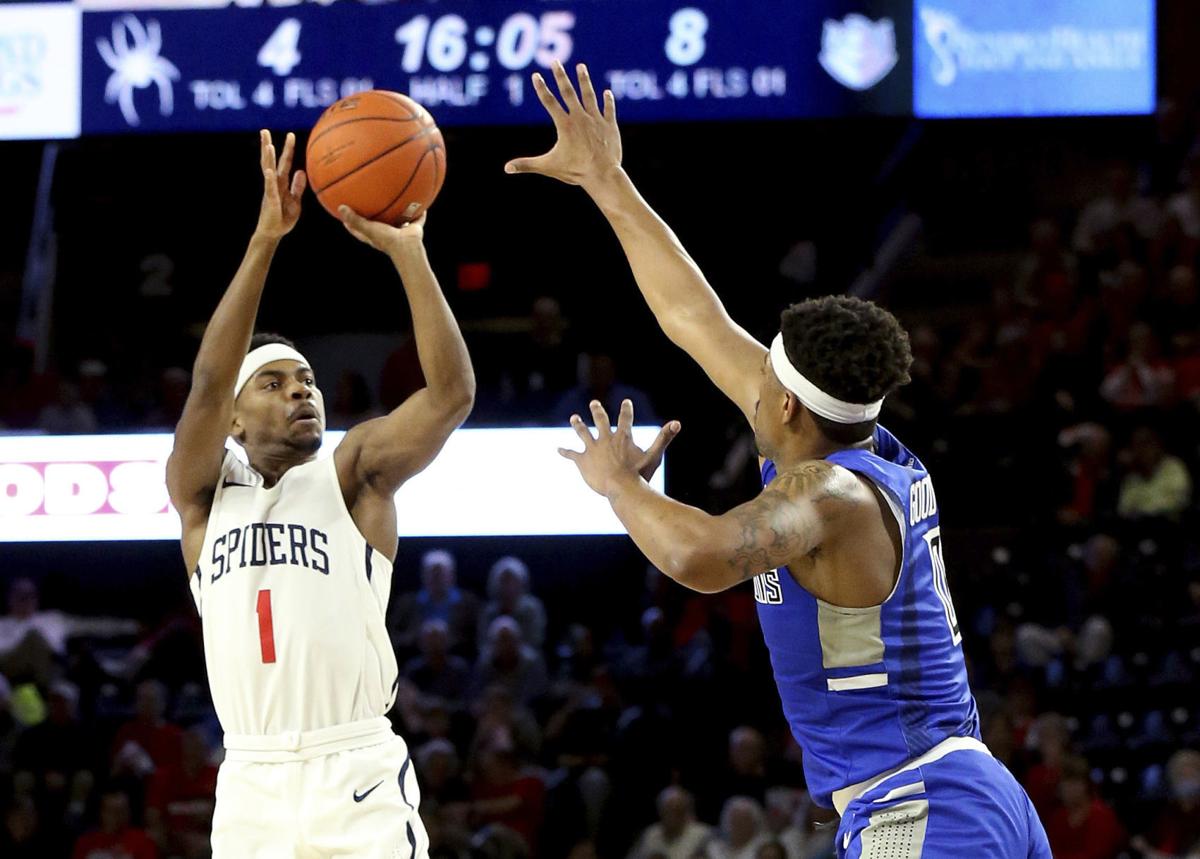 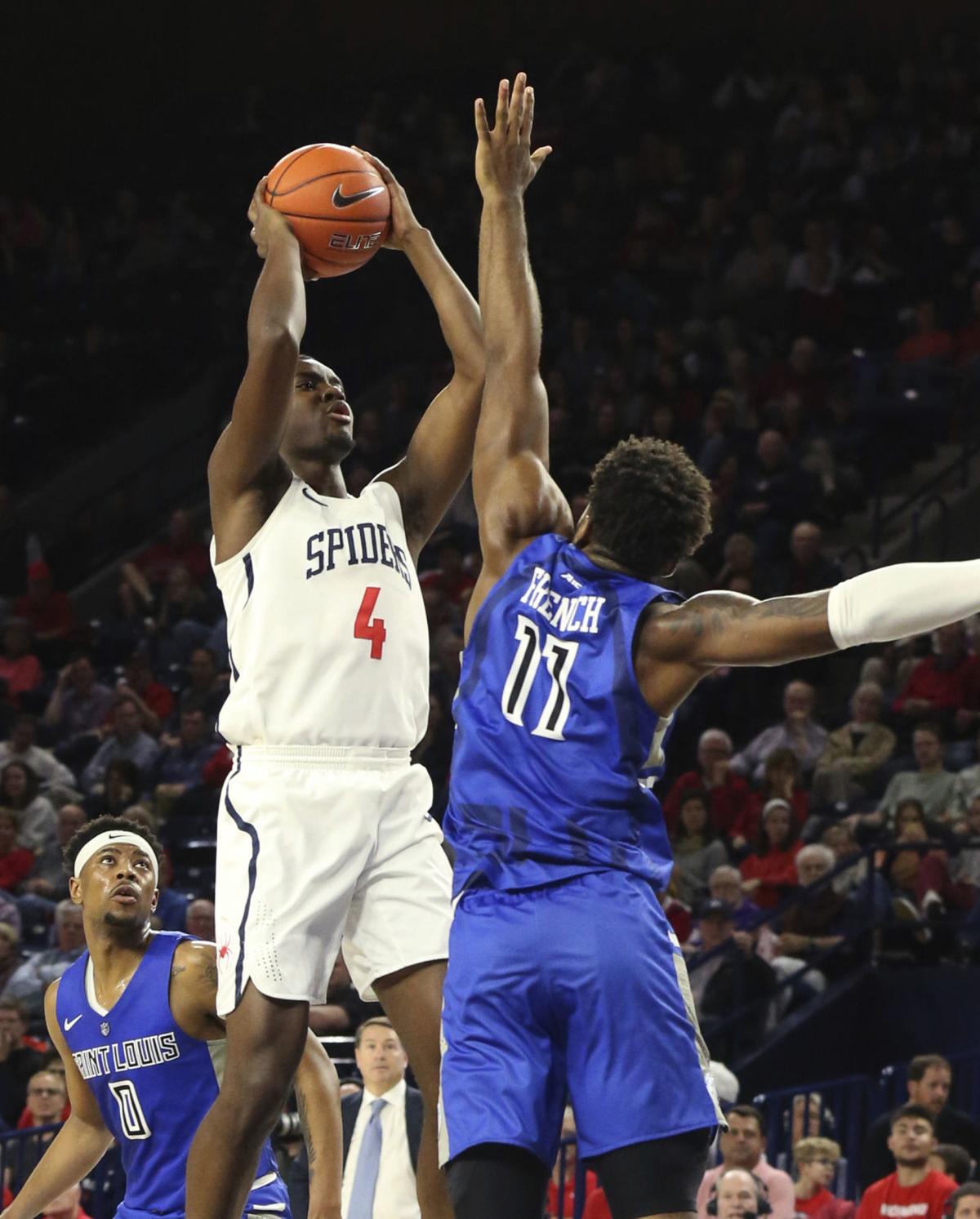 RICHMOND, Va. — On the road and down by six points against a formidable foe with one of its starters on the bench, there was plenty of opportunity for St. Louis University’s men’s basketball team to chalk up a lost Saturday night to the grinder that is the Atlantic 10 Conference.

Instead, the Billikens went on a game-changing run that might wind up defining their season.

SLU caught fire in the second half, using a 21-2 outburst over a seven-minute stretch to stun Richmond and set the stage for a 74-58 triumph at Robins Center, handing the Spiders their first home loss of the season.

“We were really focused — as focused as I’ve seen us in a long time,” Billikens coach Travis Ford said. “Even at halftime, our guys were bright-eyed, big-eyed, like, ‘What’s next?’ ‘Tell us what to do.’ It’s good to just see our team focused, because I haven’t seen it lately.”

“This game is all about runs,” Goodwin said. “I just made sure that our guys responded in the right way. By us doing that, we were able to get stops and get easy transition points, which led to us making our own run right back at them.”

After the Spiders (12-4, 2-1) trimmed SLU's lead to two points, the Billikens answered once again. They used an 11-0 spurt to extend their advantage to 58-45, capped with two baskets from freshman forward Jimmy Bell. He scored a career-high 10 points.

“He’s the one guy I thought grew up a little bit tonight,” Ford said. “We knew they were going to double team Hasahn French, so we said, ‘We’re going to challenge you. They’re not going to double you.’ And they didn’t. We wanted to give him a few touches and see what happens. We told him, ‘We need you to play,’ and it was working.”

Late in the game, the desperate Spiders went after SLU’s Achilles heel — free throw shooting — and the Billikens responded, going 12 for 14 over the final 3:01 to seal their victory.

“We had the right guys up there,” Ford said. “It’s nothing new. We know that. We knew it was going to happen. Everybody knows our history. But we made them tonight.”

“This just shows our team is developing,” Goodwin said. “We’re growing. We’re getting better every day. This just shows that we’re making that step closer to where we can actually put teams away.”

The Billikens got off to a fast start thanks to a surprising source in Bell, who hit two quick layups to give SLU a 4-0 lead, and they were ahead for all but 29 seconds of the first half.

“I do all the dirty work on this team and tonight was just my night,” a smiling Bell said. “I’m not usually a big scorer, so I do what I have to do. I was feeling good.”

SLU asserted its inside presence early, as French had three blocks in the first 12 minutes of the contest, leaving the Spiders hesitant to work the ball into the lane. Richmond standout Grant Golden struggled early, going two for eight from the field in the first half against the Billikens’ imposing post defense.

Given how closely the teams were matched, it was no surprise that both squads were unable to put together a run of more than five points in the first half.

After laboring through the past several games, the Billikens shot 67% in the second half and 51% overall from the floor, finished with 48 points in the lane and outscored Richmond 14-2 in second-chance points.

“Our offense has been letting us down, but I just thought we were a lot more efficient (tonight),” Ford said. “We gave ourselves a chance.”

SLU took a solid first step in its tough three-game stretch with the win. But with dangerous Dayton lurking Friday and a trip to Davidson the following Wednesday, no one is getting too comfortable.

“This will give us momentum, but this game is over,” Goodwin said. “We’ve got four days to get ready for Dayton at home, which is very valuable for us. We’ve got to stay humble and keep moving forward.”

Bell growing into his role as freshman at SLU

Slimmed-down big man had his best game of the season Saturday in win over Richmond.

No. 13 Dayton sinks SLU on last-second 3 in overtime

Sellout crowd was on the verge of Chaifetz Arena’s biggest celebration in six years.

Thatch learned this week he is suffering from a form of myalgia or an isolated myopathy, both of which affect muscles.

Dayton is Stu Durando's pick to win the league. Where do the Billikens rank?

Billikens have faded in last three games, although they've won the last two.

SLU offense is best it's been in 25 seasons

Billikens are averaging 72.8 points per game this season.

SLU's Jimerson out for season with broken foot

St. Louis University freshman guard Gibson Jimerson suffered a broken foot at practice last week and will be lost for the season after emergin…