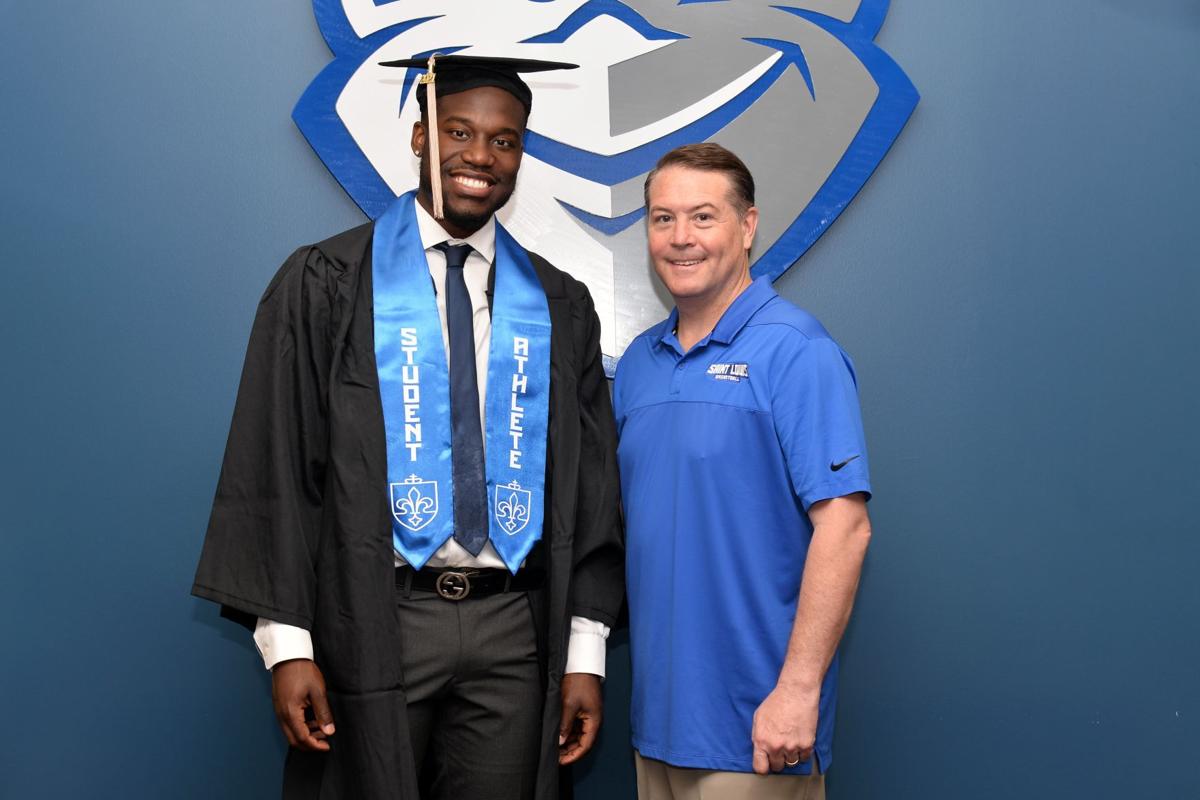 Fred Thatch Jr. was able to graduate in three years despite a debilitating muscle disease and the rigors of the college basketball schedule. Photo by Bill Barrett/St. Louis University 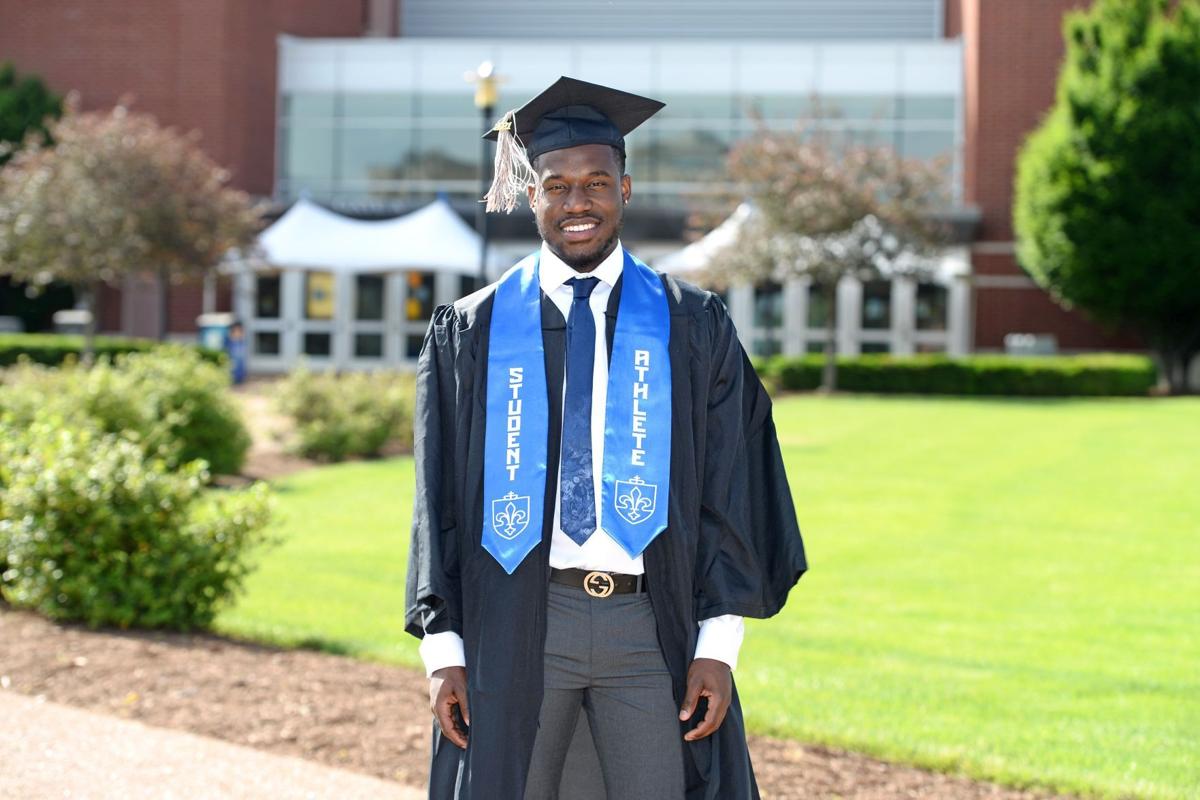 Fred Thatch Jr. was able to graduate in three years despite a debilitating muscle illness and the rigors of playing college basketball. Photo by Bill Barrett/St. Louis University

As a basketball player, Fred Thatch Jr. has spent the last three years trying to find a rhythm and a consistency at St. Louis University.

A full season as a freshman was followed by a season lost to illness and then a COVID-interrupted year. His playing career was threatened. His hope for a breakthrough season was jolted by a pandemic and his own bout with coronavirus.

Thatch, however, is not defined by his athletic skills, and the issues he faced publicly were not mirrored as he went about his real work on campus.

Thatch graduated over the weekend, securing a degree in marketing in three years, the only player coach Travis Ford said he can remember accomplishing that feat in his 25 years of coaching.

He did so despite a year struggling with a muscular disease that kept him from playing, balancing the schedule of an athlete and taking on heavy academic schedules.

“I talked to my academic adviser about the fall and spring and was told I could graduate (in the spring) or take a couple of classes this summer,” Thatch said. “I said, ‘Let’s get it done.’ This last semester I took 19 hours so I could graduate early. This semester was something else. The only thing I’ve been doing since last fall is basketball, work and sleep. That’s all I did.”

Thatch finds himself in the odd position of having a degree as well as three remaining seasons of eligibility. He’ll return to the Billikens for the 2021-22 season while pursuing a master’s degree.

He was especially happy with his spring performance that produced all A’s except for one B. He continued to be an unofficial spokesman for the Billikens at times, addressing university officials and delivering a short eulogy at the memorial service for assistant coach Ford Stuen. And he remained active with social issues through work on campus and represented the university on the Atlantic 10’s commission on racial equity, diversity and inclusion.

“Fred has always been the type who believes in pushing himself to the limit, and he’s always been challenged by adversity,” said his father, Fred Thatch Sr. “When he deals with a situation, he makes it seem simple, even though it’s challenging. He has such a strong will and mindset about life goals.”

When Thatch entered SLU, he had a large number of credits accumulated through advanced placement courses he took at Sikeston High. He took few academic breaks over the last three years.

He took 15 credit hours each of his first four semesters. He took two courses each summer and added one this past winter, when he was hit with several days of serious COVID symptoms.

Maybe his biggest challenge came in the fall of 2019 when Thatch was unable to play and told his career might be in danger as he went through test after test to determine the root of his muscular and fatigue problems.

“When that happened, my head instantly went to the books,” he said. “They were telling me I might not be able to play basketball anymore, so I knew I had to get rich some way in the business world. I locked in on school. Basketball was the last thing on my mind.”

Thatch’s days were not unlike other athletes at SLU. He woke on many days early for weight training then turned to homework before attending classes. He then went to practice and did more work before trying to get to bed by 10, a sleep regimen he said he started with his illness.

“It’s so uncommon for anyone to graduate in three years,” Ford said. “For someone who’s an athlete with so many other responsibilities and then add in the difficult year he had, it’s an amazing accomplishment in so many areas. But it doesn’t shock me. That’s Fred. When he sets his mind to something, he does it.”

Thatch’s interest in marketing and business does not surprise his father. Fred Thatch recalled the day his son sat down with mom and dad and talked them into buying him a car as a reward for earning a basketball scholarship.

Aside from his classroom excellence, Thatch has a confident charisma that has led to speaking requests. He talked to the SLU board of trustees about a proposed project. He said he recently addressed some sponsors, and was asked to talk about Stuen at the recent Chaifetz Arena service.

“I don’t volunteer, I get asked to do it,” he said. “I’ve never been shy about talking to people. I like communicating with different people. I don’t say ‘no.’ It brought me into the public speaking world.”

Thatch said he is looking forward to having a normal offseason and regular season with his sights set on having a major impact on the Billikens. He averaged 5.4 points and 3.7 rebounds in 2020-21 and was especially effective in the final month of the season.

However, even then he was dealing the lingering effects of COVID, which dealt a blow not only to his conditioning but set him back in his one course during the winter break.

“I’m not the type to just think about everything that’s happened in the past, but it’s eye-opening to me,” he said. “I had my hands full mentally and physically. I really accomplished something.”

Forte takes over for his friend: 'Bigger than basketball'

Forte wants to replicate Stuen's enthusiasm and make sure his friend is not forgotten while forging his own career.

Fred Thatch Jr. was able to graduate in three years despite a debilitating muscle disease and the rigors of the college basketball schedule. Photo by Bill Barrett/St. Louis University

Fred Thatch Jr. was able to graduate in three years despite a debilitating muscle illness and the rigors of playing college basketball. Photo by Bill Barrett/St. Louis University